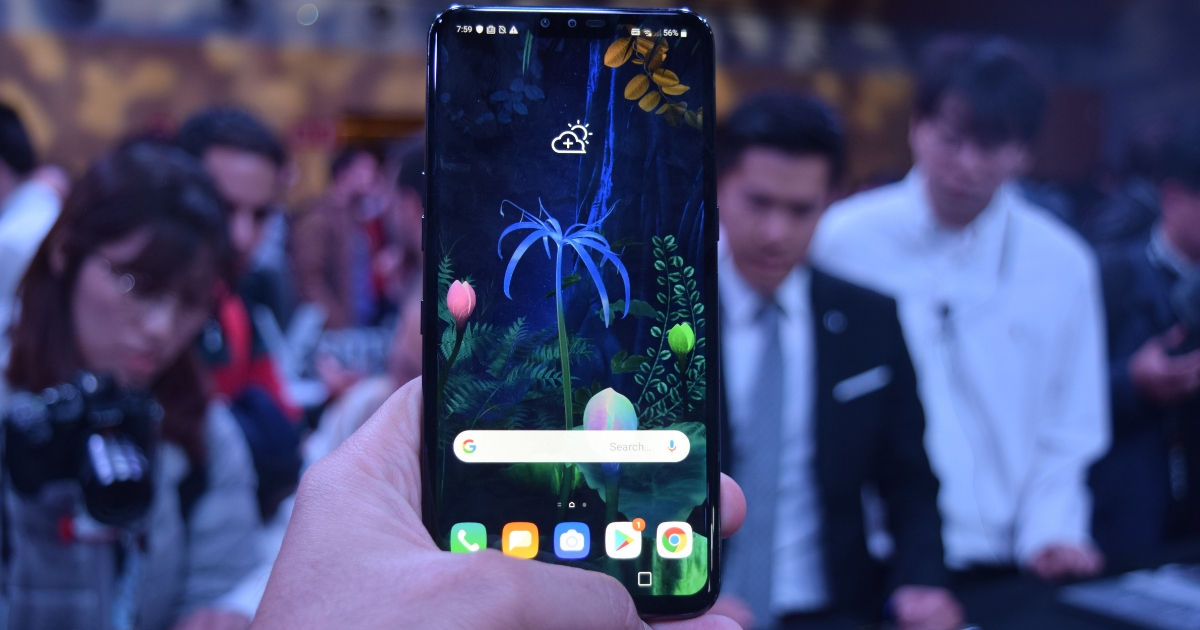 “The LG V50 ThinQ is among the very first 5G smartphones. But what else does the device bring to the table? Read on to find out”

LG’s event during the MWC has always been reserved for a G series flagship, and this year was no different as the Korean company introduced the G8 ThinQ (first impressions) to the world. However, that’s not all the brand had in store for us, as it changed things up a bit and instead of launching a new V series smartphone in September, the phonemaker has also released the successor to the V40 ThinQ within just six months of its launch. Aptly dubbed the V50 ThinQ, the phone does have some head-turning features – it’s among the very first set of smartphones with support for 5G and it also brings back the semi-modularity aspect of the yesteryear’s LG G5 with a dual screen? Wondering why we’re so excited about the LG V50 ThinQ? Read on ahead to find out. 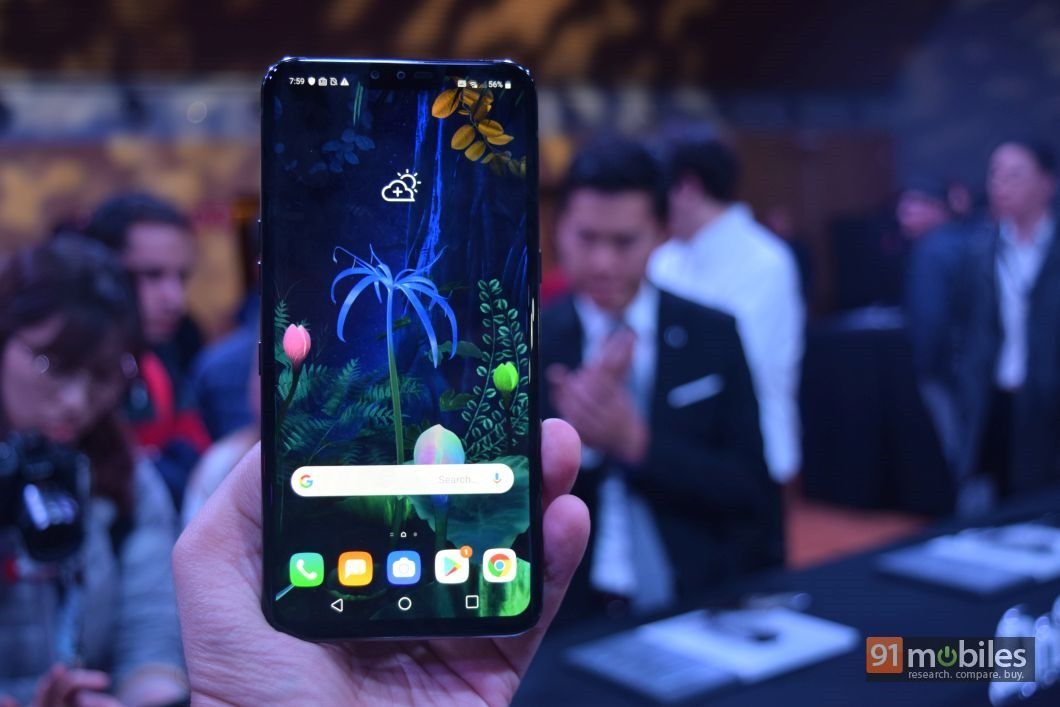 The LG V50 ThinQ isn’t much different from its sibling, the G8 ThinQ, in terms of design and build quality. The handset features a glass-back construction which looks quite appealing in its classy black hue. However, that also means that fingerprints are visible rather easily. Up front, the device is dominated by the display panel though there’s a notch up front. As I had mentioned in the hands-on of the G8 ThinQ, it’s strange to see a wide notch this year, considering every brand is trying to find a solution to achieve a higher screen-to-body ratio with options like dewdrop notches to punch-hole cut-outs, and from sliding panels to pop-up selfie shooters. The V50 ThinQ is also wider than its sibling and even though it weighs more at 183g, the weight has been distributed quite well. 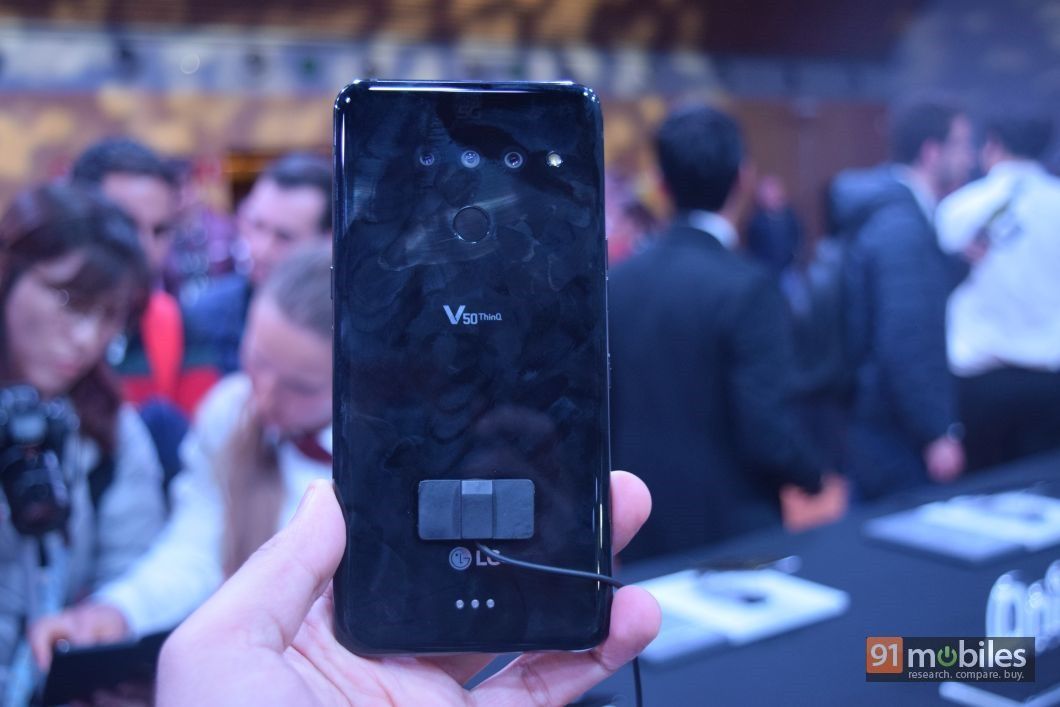 What’s really appreciable is the fact that even though the smartphone comes with a 5G modem, LG has ensured that the V50 ThinQ remains sleek (at 8.3mm). Moreover, the rear camera module doesn’t jut out from the rear, which ensures that my OCD every time I see a phone with protruding cameras doesn’t kick in with this handset. There are no surprises either when it comes to ports and controls.

Display-wise, the V50 ThinQ is built around a 6.4-inch P-OLED screen, which bears a resolution of 1,440 x 3,120 pixels. The panel offers impressive visuals with good viewing angles and ample brightness levels, though I was only able to check out the phone in indoors. The screen also gets protection against scratches and minor knicks thanks to a layer of the Corning Gorilla Glass 5. 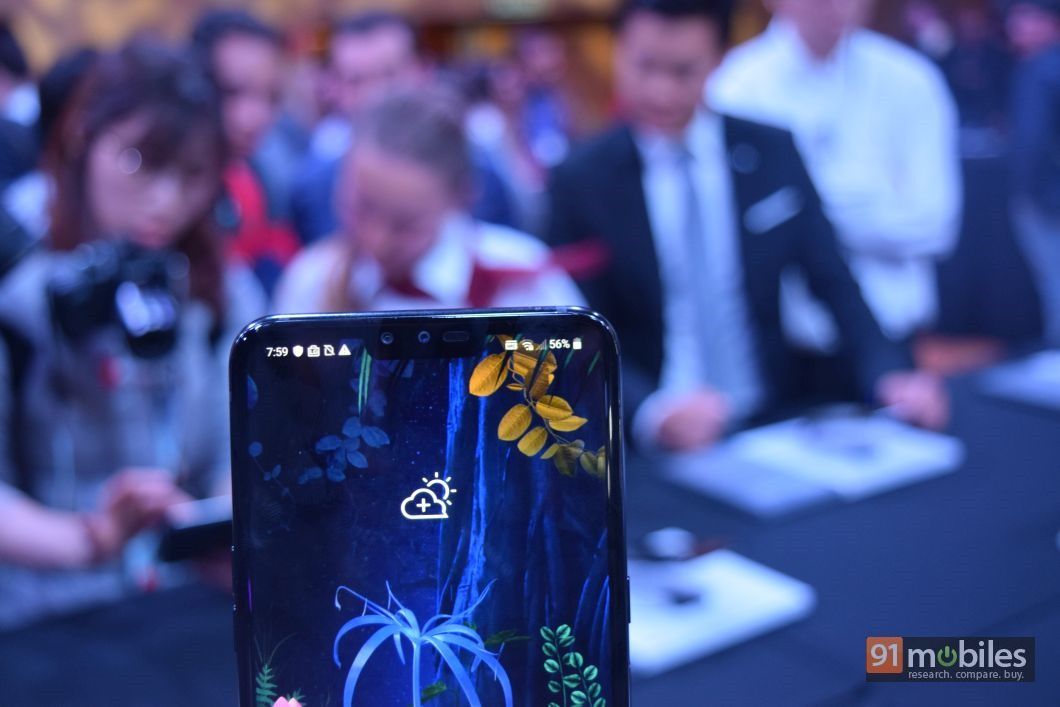 While we’re at the topic of the screen, it’s worth noting that the brand is reviving its semi-modularity tech with the introduction of the Dual Screen. As the name indicates, the attachment adds another screen to the V50 ThinQ. We’ll be taking a closer look at the Dual Screen soon, but it’s certainly quite interesting that smartphone brands think that 5G will unlock new avenues for multimedia and perhaps that’s why Huawei introduced the foldable Mate X with 5G capabilities, and LG is letting you add another screen. 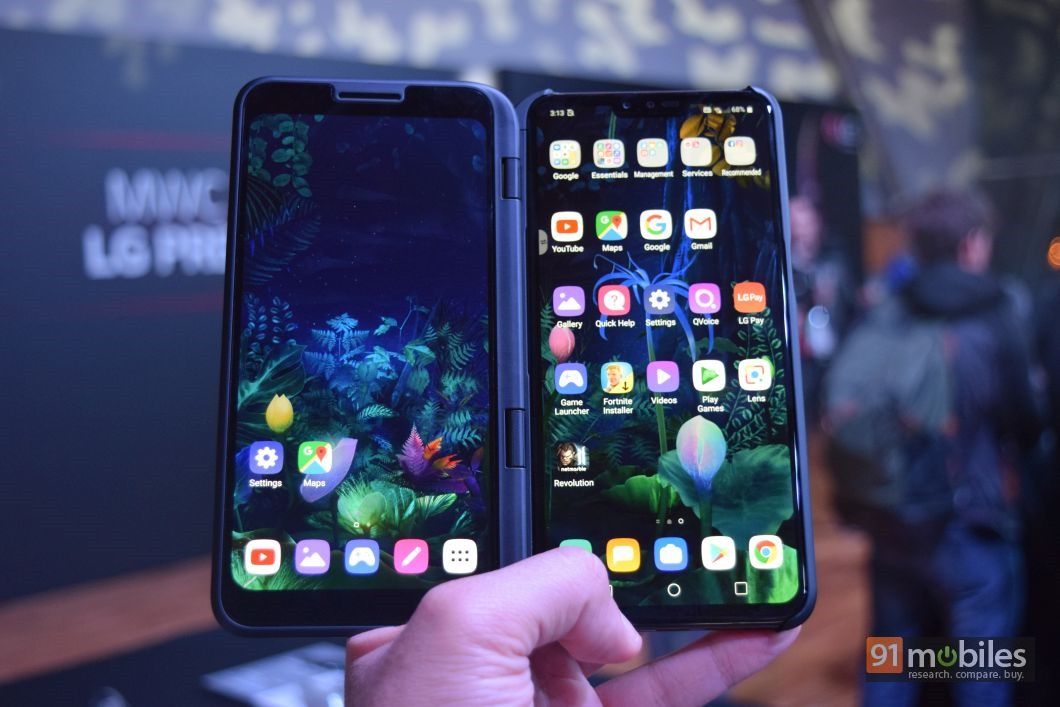 Speaking of 5G, the LG V50 ThinQ is able to offer that courtesy Qualcomm’s X50 modem. The chipmaker also leads the performance department with the Snapdragon 855 SoC, which works in tandem with 6GB of RAM. Based on 7nm fabrication, the flagship chip features custom Kryo 485 cores and comes with Adreno 640 GPU. What does that mean for you? In short, you can expect slick performance on the smartphone, even while running intensive tasks such as games. For storage, the handset ships with 128GB of memory onboard, which is expandable further with the use of a microSD card. 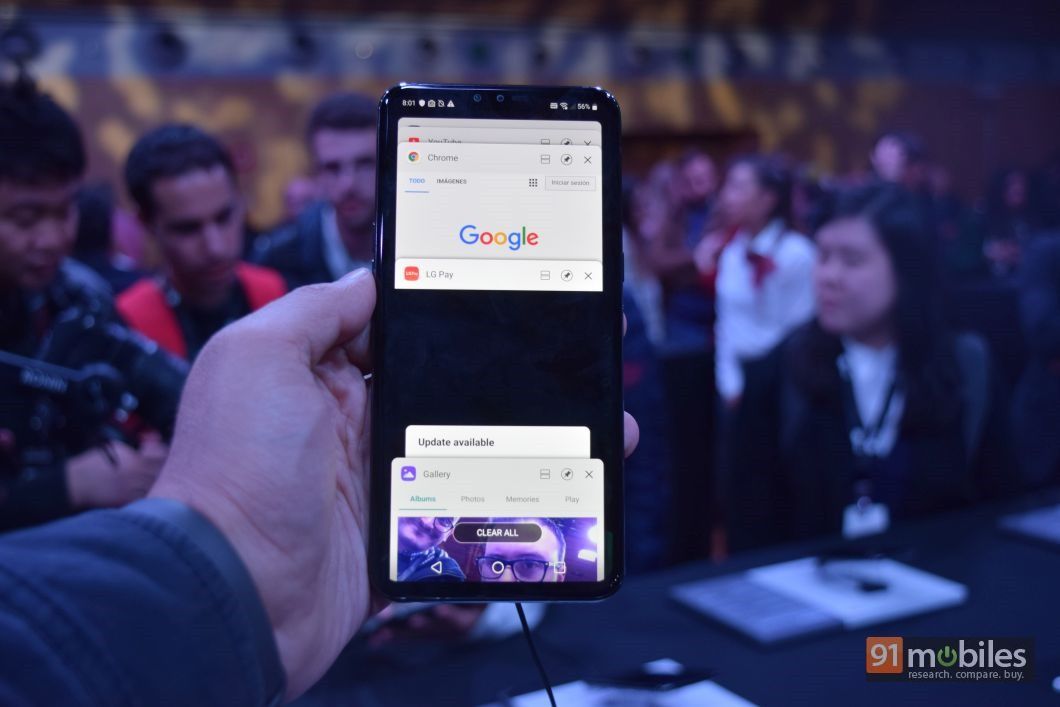 In the imaging department, the V50 ThinQ shares its rear camera specs with the G8 ThinQ. That means, the handset gets a tri-cam setup on the back, comprising 12MP standard lens + 16MP ultra-wide sensor + 12MP telephoto snapper. For selfies, the device offers a pair of 8-megapixel and 5-megapixel depth-sensing unit on the front. Considering that 5G connectivity might drain battery faster, LG has thoughtfully packed a beefier 4,000mAh cell on the V50 ThinQ. To ensure a better thermal dissipation, the phone also comes with cooling pipes. On the software side of things, the device boots Android 9.0 Pie which is topped with LG’s skin. 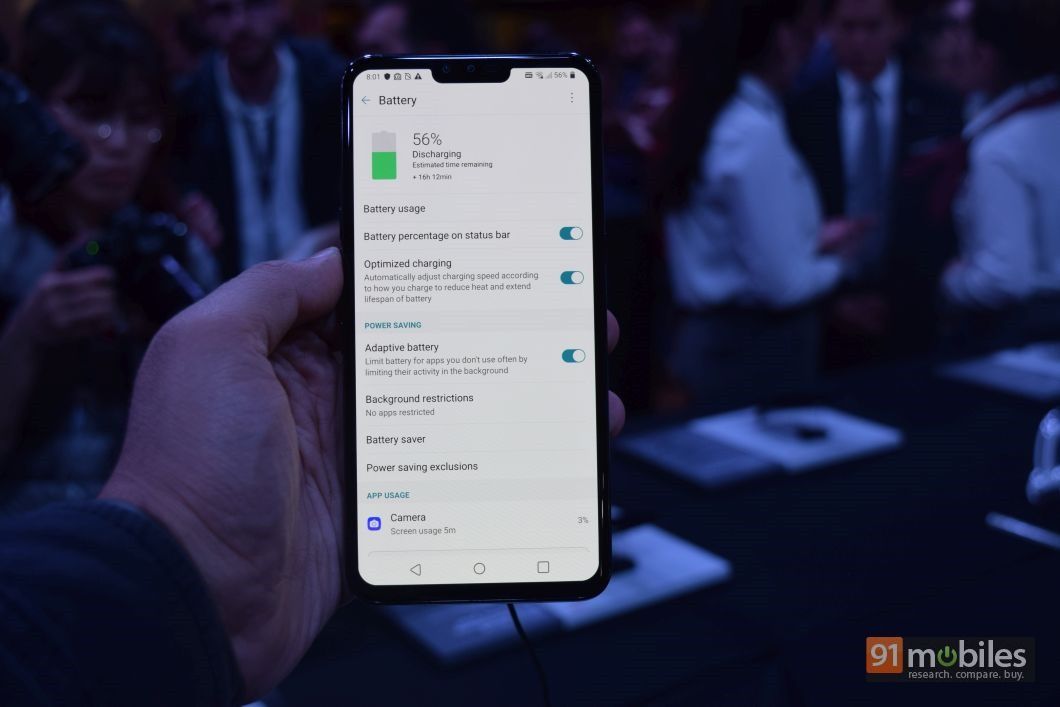 Sadly, LG hasn’t announced the pricing of the V50 ThinQ flagship. The company did announce a handful of telecom operators as its partners however, including Sprint, Telefonica, and Vodafone among others. Considering that 5G isn’t expected to launch commercially in India this year, don’t keep your hopes up for seeing the LG V50 ThinQ in India anytime soon.