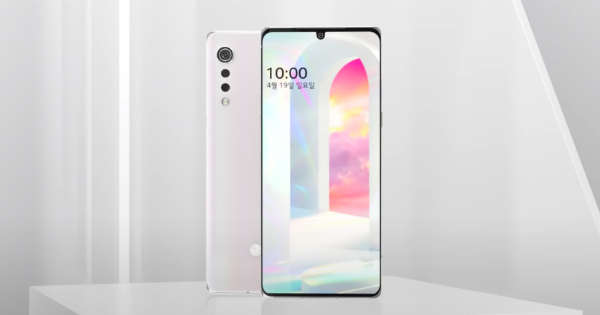 LG Velvet 5G smartphone launch is scheduled for May 7th as confirmed through a teaser video published on its Korean YouTube channel. The video shows raindrop sprinkles — referring to the handset’s unusual cascading camera layout. Earlier teasers have revealed the complete design of the handset, including a tiny waterdrop at the front to accommodate the selfie snapper and the edges at the front and back are symmetrically curved, giving it a more elegant look. However, the LG Velvet 5G isn’t the company’s flagship, instead, it is a premium mid-range offering.

The LG Velvet teaser video also confirmed it will be powered by the Qualcomm Snapdragon 765 SoC with 5G connectivity, triple rear cameras with an LED flash, and ultra-slim bezels. The handset retains the good old 3.5mm audio jack. The volume rocker and power button are on the left spine, while the SIM card tray and secondary microphone are at the top. It will ship in black, white, green, and an orange and pink hybrid colour options. The handset is likely to boot Android 10 OS with LG custom skin on, pack at least 4GB RAM and 64GB storage that should be further expandable.

The LG Velvet 5G could ship with a beefy battery combined with fast-charging support, an IP rating for water and dust resistance and an in-display fingerprint sensor for security. However, we’re yet to learn the complete specifications of the LG Velvet 5G, but with the launch right around the block, we should know more information soon. Stick around.