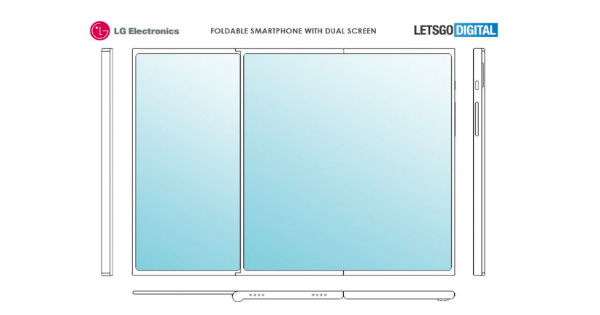 LG has filed for a new design patent for a folding smartphone that looks similar to the Samsung Galaxy Fold. The company filed for the patent on March 6th 2019, and the same was published on August 9th 2019 in the WIPO (World Intellectual Property Office) database. The Z-fold type patent description includes 18 sketches showcasing a folding device with two displays, one of which is a flexible screen, thus making it unique. When unfolded, a large flexible screen appears on the inside. The screen size is apparently twice the size of a regular screen and folds open in width-like a tablet. The housing also accommodates a second display.

The screen surface of the second display is half as small as the flexible main display. It has a remarkably narrow screen edge, thereby offering a full-screen design. There is a little frame edge visible between the first and second display. The second display also serves the purpose as a front display. Thanks to its unique hinge design, the front screen also bends to become a part of the primary display on the inside. Since the selfie snapper and fingerprint sensor aren’t visible, it means that they could be placed under the display.

The LG patent design showcases dual rear cameras at the back, and there are two physical buttons on the right side. The bottom has a microphone and a speaker. The 3.5mm audio jack is also seen missing, so does the USB Type-C port. This means the folding phone from LG might be portless and should charge wirelessly. Since these are in the patent stage, there’s no way to tell if LG would ever take the design forward with an actual product.