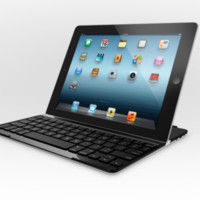 Logitech has launched another keyboard accessory – the Ultrathin aluminium Keyboard Cover – made specially for the third-generation iPad and  iPad 2. This not only protects your iPad screen but its built in keyboard has easy typing options.

Alexis Richard, director of product marketing at Logitech said “The third-generation iPad and its apps are designed to give you more control and creativity, whether you are editing photos and movies, making music or writing a novel.” “The new Logitech Ultrathin Keyboard Cover – with its ultra-sleek, smart design and extended keyboard battery life – provides a convenient way for you to make the most of your iPad, no matter what activity you are using it for,” he added. Its features are :-

Show Full Article
It is priced at an approx Rs. 5,157 though its availability in India is not yet known. Logitech has scored well with the launch of  this accessory for iPads. With iPads becoming hugely popular this accessory will surely find buyers. However its battery life though extended could have been longer.
ShareTweetShare
Share