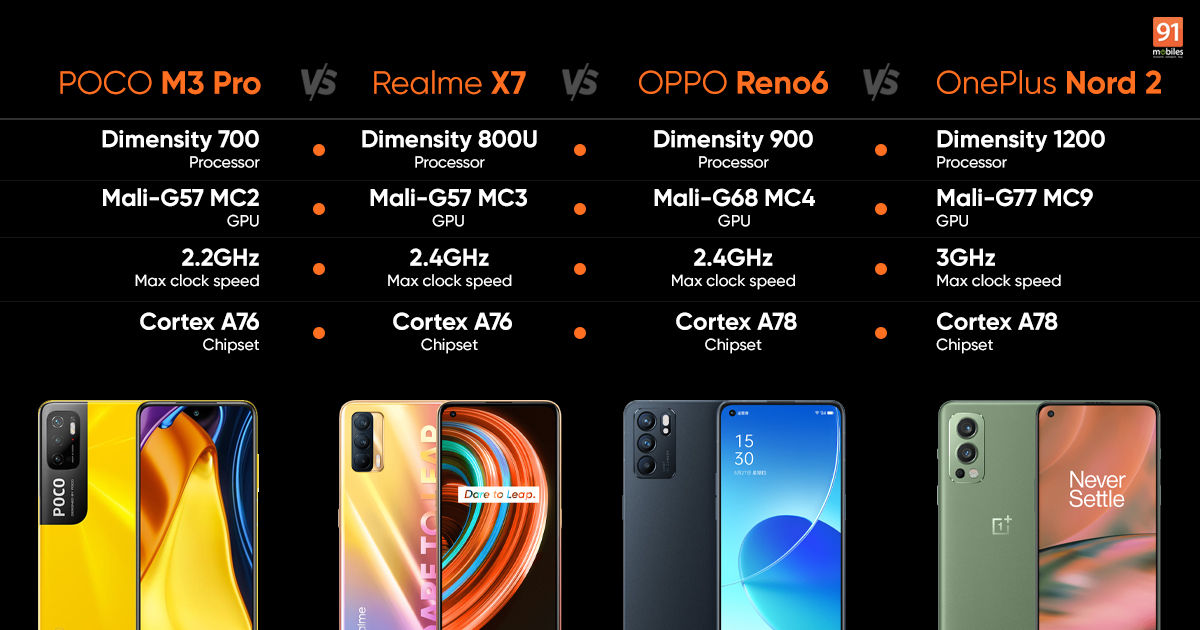 MediaTek has been around for a while, but over the last year or two, it seems an increasing number of smartphone brands are making use of the Taiwanese chipmaker’s SoCs. In fact, in recent months, MediaTek’s new Dimensity lineup of 5G chipsets have found favour with many manufacturers. At the top of the pedestal currently is the Dimensity 1200 chipset, which places itself against the Qualcomm Snapdragon 870 in terms of processing prowess. Below that you get the Dimensity 900 introduced on the new OPPO Reno6 (review). A few phones below Rs 20,000 are sporting the Dimensity 800 or 800U chipset, while the Dimensity 700 SoC is also being used by quite a few smartphones. 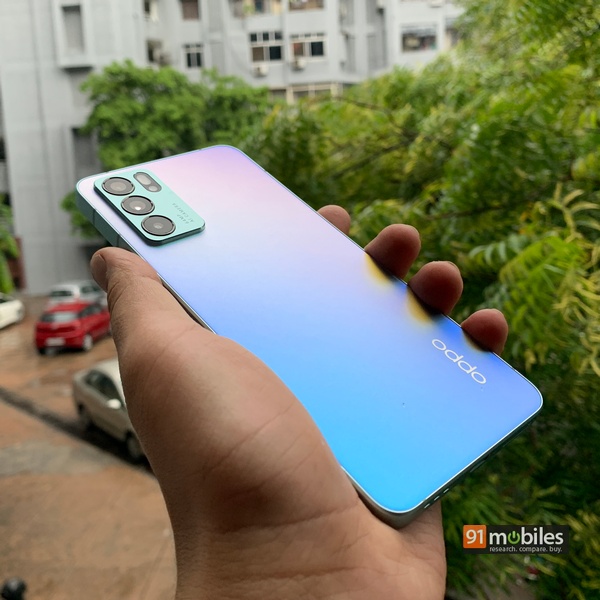 The purpose of this comparison is to determine how much of a performance gain each Dimensity SoC can offer, as you move up the tiers. I have chosen the POCO M3 Pro, Realme X7 (review), OPPO Reno6, and the OnePlus Nord 2 (review) as the contenders, powered by the Dimensity 700, 800u, 900 and 1200 respectively. The basis of this comparison will rest on the different benchmark scores each device gets and how it runs the heavy-duty Battlegrounds Mobile India.

The purpose of benchmarks is to give a quantitative measure of a device’s performance. POCO M3 Pro, with the Dimensity 700 chipset, scores 557 and 1,746 on single-core and multi-core performance. Only a couple of years back, hitting a multi-core score above 1,000 would have been a big task for a sub Rs 15,000 phone, but MediaTek has turned the game on its head. The Realme X7’s Dimensity 800u returns scores of 594 and 1,789 which indicates that there is hardly any jump in performance from the 700, although there is a price gap of Rs 5,000 between the two devices. The Dimensity 900-toting Reno6 is priced on the higher side at Rs 29,990. The Geekbench scores on the device were 720 and 2,089, a jump of nearly 15 percent in terms of multi-core performance. Lastly, there is the Nord 2 which harbours the flagship Dimensity 1200, which scored 807 and 2,554. While the difference in single-core scores is not significant, the jump of nearly 20 percent from the Dimensity 900 is noteworthy. The OnePlus Nord 2 is priced the same as the Reno6 when matching both the RAM and storage variants of the two phones.

On the latest version of Antutu, the POCO M3 Pro had an overall score of 323,826 which is quite a commendable feat. This is the same kind of score Android flagships got back in 2019, which shows how far we have come in terms of processing prowess on cheaper devices. The Realme X7 steps up the game with an overall score of 389,363 which is about 17 percent more than the M3 Pro. On the Reno6, I got a score of 425,094 which is not a very big jump in terms of performance with an increase of about 9 percent. However, when compared to the Nord 2’s Dimensity 1200 the jump is a lot more significant at 30 percent with the overall Antutu score at 613,980.

It is also prudent to test out how good the graphical capabilities are with each iteration of the Dimensity series. 3DMark’s Wild Life benchmark is a good way to test this. On the POCO M3 Pro, the overall score was 1,104 with an average frame rate of 6.60. Next up is the Realme X7 that gets an overall score of 1,589 which is about a 30 percent jump as is the average frame rate of 9.50. On the Reno6 the overall score is 2,020 and the average FR 12.20, which is about a 22 percent jump in graphical performance. Lastly, the OnePlus Nord 2 delivers a score of 4,150 and an average FR of 24.90, both of which are double what you can see on the Dimensity 900 or a 100 percent increase. It is clear that the Dimensity 1200 has a significantly large jump in graphical capability as compared to other Dimensity chipsets.

Since the release of BGMI, it has been my go-to game for getting a measure of a phone’s graphical prowess. The test usually revolves around 30 minutes of gaming while the graphics settings are set to the maximum possible Frame rate option. Surprisingly the Dimensitu 700 and 800u are able to achieve Ultra FR option while the Dimensity 900, for some reason, is restricted to a level below at High. I believe that in the coming weeks there should be an update that will enable you to set higher frame rates on the Reno6. OnePlus Nord 2 can of course take the FR option to Extreme and perhaps in the future get the 90Hz option as well which is present on the Realme X7 Max (review).

The POCO M3 Pro was able to run the game for 30 minutes without any major drop in frame rates but with occasional stutters. It dropped 8 percent battery while the temperature rose by about 7 degrees. It is important to know that the M3 Pro has a 5,000mAh cell while the rest have battery capacity ranging from 4,300 to 4,500mAh. Even so, the Realme X7 matched the M3 Pro with a loss of 9 percent battery and a temperature gain of 7 degrees. The Reno6 ran hotter with a temperature gain of around 10 degrees while the battery also dropped by 10 percent. This is while the FR option is the lowest amongst all phones. The OnePlus Nord 2 again comes out on top with a 6 percent drop in the battery while running at a higher frame rate and a temperature gain of 8 degrees.

While it was abundantly clear that the Dimensity 1200 would be leading the pack, it is interesting to see how much of a performance jump it provides over the Dimensity 900. In comparison, the Dimensity 800u has a marginal increase in processing capabilities over the Dimensity 700, which itself does very well considering the pricing of the device. Worth mentioning that currently, the Reno6 is the only device with the Dimensity 900, and seems to be priced on the higher side. MediaTek is steadily increasing the options as far as its 5G-enabled Dimensity SoCs are concerned, and recently announced the launch of Dimensity 810 and 920 chipsets. It would be safe to say we’ll get to see quite a few smartphones using Dimensity SoCs in the future, and it’d be interesting to see how they fare.