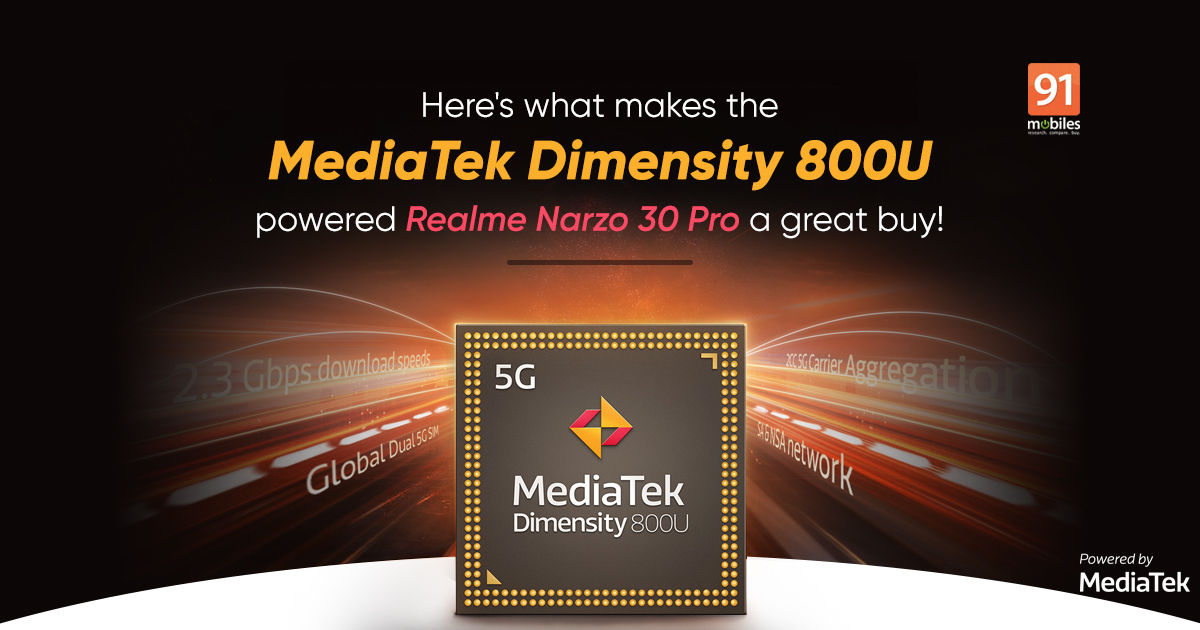 The Indian smartphone market has been infused with yet another powerful device in the form of the Realme Narzo 30 Pro 5G. Priced competitively at Rs 16,999, the handset delivers a range of extraordinary features that are headlined by the MediaTek Dimensity 800U 5G chipset. The rest of the smartphone’s specifications are equally impressive, mind you. So much so, the phone will make you ponder how the company managed to price it so attractively. Let us give you a full overview of what’s in store for you with the new Narzo 30 Pro. 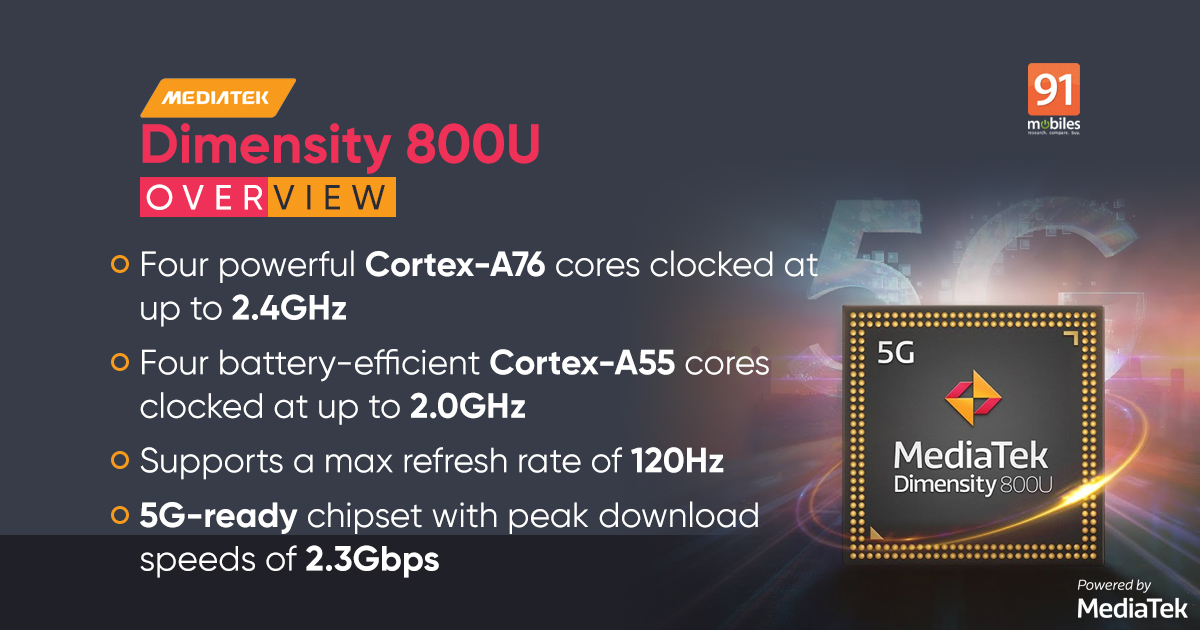 As prefaced previously, the Realme Narzo 30 Pro’s marquee feature is undoubtedly the MediaTek Dimensity 800U 5G chip ticking at its core. Built using a 7nm process, this octa-core SoC not only offers powerful performance, but it also maintains optimal levels of power consumption and dissipates heat appropriately. Coupled with the Mali-G57 MC3 GPU, the Narzo 30 Pro 5G will cast a tall shadow on the competition and dominate the price segment for CPU and GPU intensive tasks such as gaming and heavy multitasking. Needless to say, the Realme Narzo 30 Pro 5G will be able to handle every task thrown at it with gusto, and buyers opting for the handset will rarely fret about frame-rate drops, jittery animations, or slow app launch times.

MediaTek is leading the 5G spectacle in India, and the company’s Dimensity 800U chipset is all geared up for the 5G revolution that’s set to hit the country this year. Interestingly, amidst a slew of other 5G devices, the Realme Narzo 30 Pro stands out owing to the Dimensity 800U’s 5G DSDS support that allows the chipset to offer 5G capabilities on both SIM slots of this Realme phone. What’s more, the chip supports all the mainstream 5G bands that are expected to go live in the country, while its special Smart 5G network optimisation technology is focused on reducing power consumption by up to 30 percent, giving a boost to the phone’s battery life. To do so, the chipset superimposes 5G and Wi-Fi networks to deliver top-notch internet speeds as well as a stable connection.

The Realme Narzo 30 Pro 5G ships with a whopping 5,000mAh battery that boasts of standby time of 25 days. If you need more info on how beefy the unit is, just know that it can provide you with 37 hours of talk-time, 18 hours of YouTube viewing, 102 hours of music streaming, and 19 hours of WhatsApp browsing in one go. Suffice it to say, with moderate or judicious usage, you will easily be able to sail through two days off a single charge. 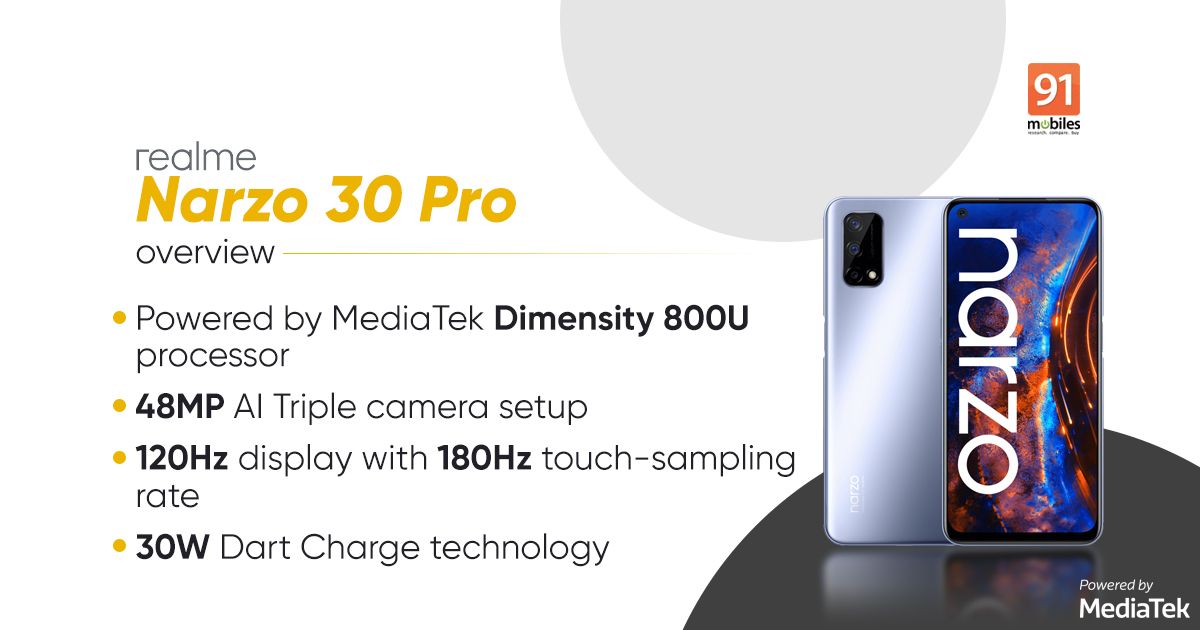 What’s more, unlike the competition, Realme has paid heed to the charging technology onboard the Narzo 30 Pro. To that effect, the smartphone is compliant with the company’s 30W Dart Charge and, consequently, can refuel completely in the span of just 65 minutes. And, if you’re ever in need of a quick burst of charge, the phone can be juiced up to 50 percent in just 25 minutes as well! Moreover, Realme has also equipped this phone with a Super Power Saving Mode, which coupled with the Dimensity 800U’s battery-efficient cores, significantly extend the battery life of the handset when you’re in dire need of juice.

The Realme Narzo 30 Pro 5G guarantees gorgeous visuals with its 6.5-inch Ultra Smooth display. This panel boasts of a 120Hz refresh rate, resulting in seamless scrolling and an overall undeviating visual experience. With its 2400 x 1080-pixel resolution and 600-nits peak brightness, expect new levels of immersion into the content being watched on the phone. Additionally, this display even sports a 180Hz touch sampling rate, which more than anything, helps during frenzied gaming sessions, giving buyers a slight advantage when engrossed in virtual gun battles.

Towards the back, the Realme Narzo 30 Pro 5G carries an AI triple camera setup that’s headlined by a 48MP, f/1.8 aperture main camera. Owing to the lens’s relatively larger aperture along with the sensor’s 0.8μm pixel size, photos captured by the handset after the sun has set will turn out spectacular. What’s more, thanks to the sensor’s 48MP resolution, you will find an abundance of details in the images too. As for the rest of the imaging sensors, the handset comes equipped with an 8MP ultra wide-angle unit with a 119-degree field of view, allowing you to get a more extensive perspective of your subject. There’s also a macro lens present on this phone, which will let you snap images from as close as 4cms to the subject.

A Cinema Mode with manual controls for exposure, white balance, and other shooting parameters can be found on the Realme Narzo 30 Pro as well. This is in addition to UIS Video Stabilization, which is present on both the front and rear cameras. Speaking about the front camera, the handset gets a 16MP in-display shooter that offers several AI-based features to enhance users’ selfie capturing experience.

The Narzo 30 Pro ships with Dolby Atmos and Hi-Res audio certification, giving you loud and clear sound no matter what environment you’re in. The phone’s fingerprint scanner is located on its side surface and this ergonomic placement ensures that you can unlock the device in an instant whenever you want to. The device is being sold in India in two variants, one that comes with 6GB RAM and 64GB storage and another with 8GB RAM and 128GB storage. Lest we forget, both the variants ship with a dedicated microSD card slot as well.

Pool everything together and we wouldn’t be surprised if Realme Narzo 30 Pro 5G breaks all records in its price segment. The fact that the smartphone is equipped with the MediaTek Dimensity 800U is a good enough reason to entice buyers to the company’s doorsteps. The handset’s 5G capabilities, which too are powered by the SoC, make it future-proof too, ensuring buyers don’t have to upgrade instantly when the next-gen network is rolled out in the country. All said and done, the MediaTek Dimensity 800U-backed Realme Narzo 30 Pro will forever change how buyers perceive mid-range phones.