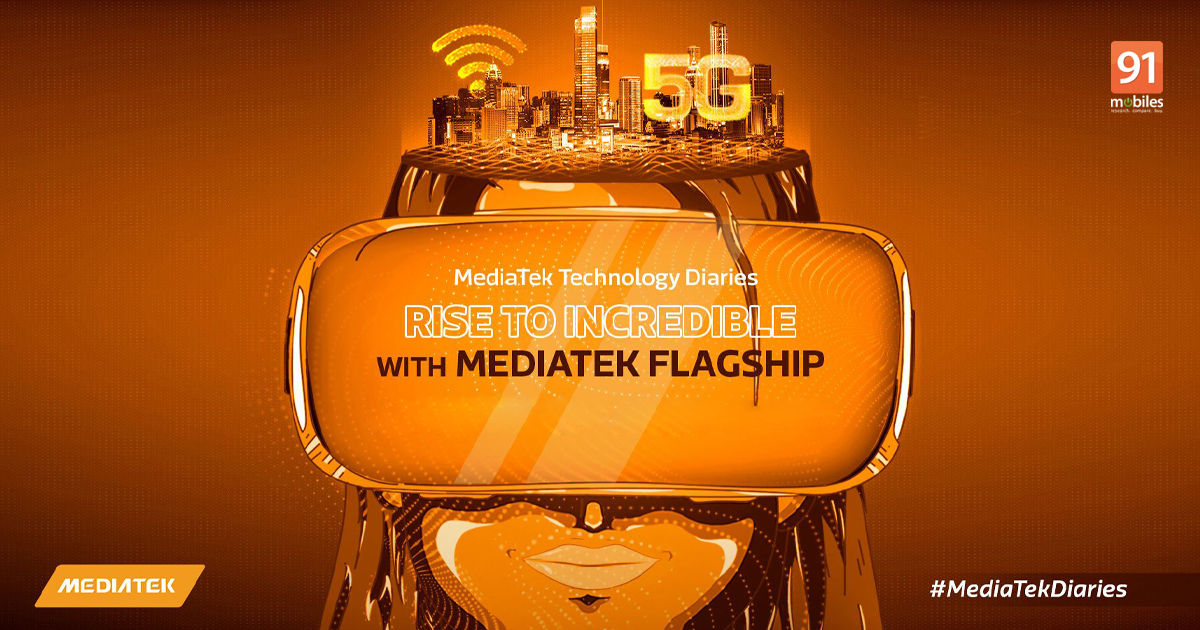 Since 2018, leading chipset maker MediaTek has been conducting Technology Diaries events across India. These sessions aim to bring a human touch to the technology working behind the scenes across our modern smart devices by showcasing them to the masses. Now, in its 10th edition, the latest Technology Diaries event was full of insights and some important announcements too. If you missed the event or want to know how MediaTek is aiming to “rise to incredible” this year, then this feature is for you.

MediaTek Pentonic 2000: Taking the visual experience to the next level 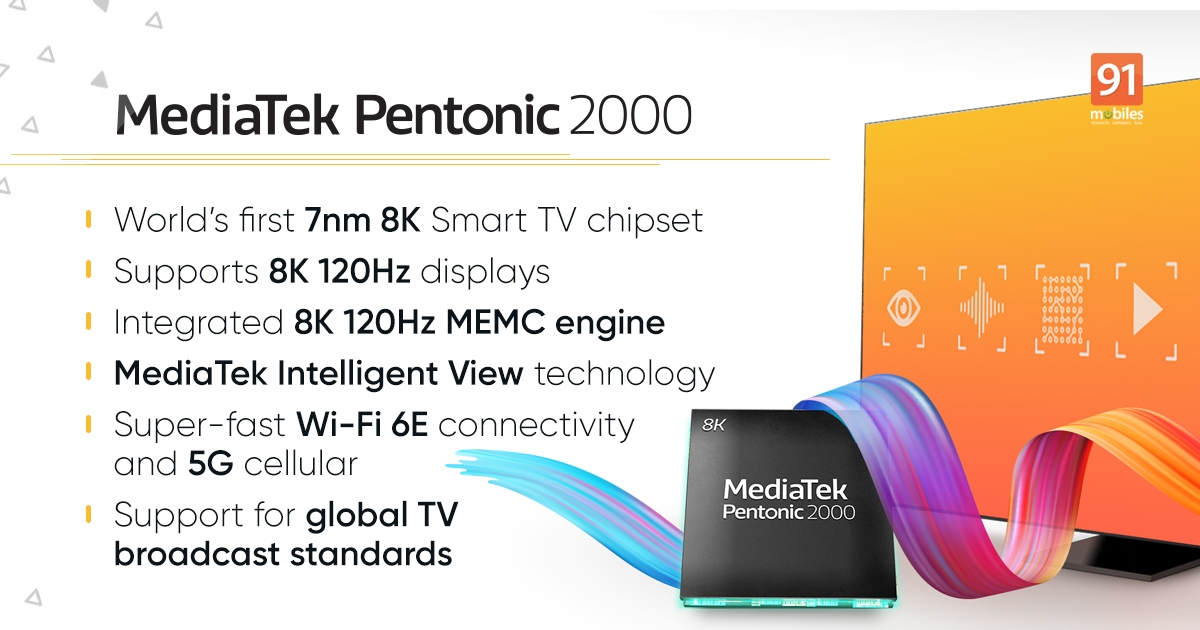 Did you know that MediaTek is the #1 chipmaker for smart TVs? It powers 2 billion televisions globally, and to maintain its pole position, the brand introduced the Pentonic series of TV chipsets in November last year. The flagship offering is dubbed MediaTek Pentonic 2000 and its specs suggest that the next-gen televisions will bring a theatre-like experience to your homes. It’s the world’s first smart TV chipset with a 7nm node ensuring ultra-efficiency. For immersive visuals, it boasts support for 8k resolution with a 120Hz refresh rate. Its AI processing engine (APU) allows upscaling of low-res content to 8k resolution, promising a delightful viewing experience on the smart TVs powered by the Pentonic 2000 silicon. The SoC comes with the latest connectivity standards too, offering Wi-Fi 6E and optional 5G support with MediaTek T700-based M.2 add-in card.

The chipset brand has continued to move up the value chain with its offerings, and its MediaTek Dimensity 9000 is the pinnacle of its prowess. The flagship mobile SoC is the world’s first chip built on 4nm fabrication. It was also the first SoC with a Cortex-X2 core running at 3.05GHz. The high-end core is complemented by three Cortex-A710 cores that are clocked at 2.85GHz, and four power-efficient Cortex-A510 cores that are tuned at 1.8GHz. The flagship processor also supports a single camera of up to 320-megapixels. As far as the connectivity is concerned, the chipset features 3CC Carrier Aggregation, Wi-Fi 6E, and Bluetooth 5.3. 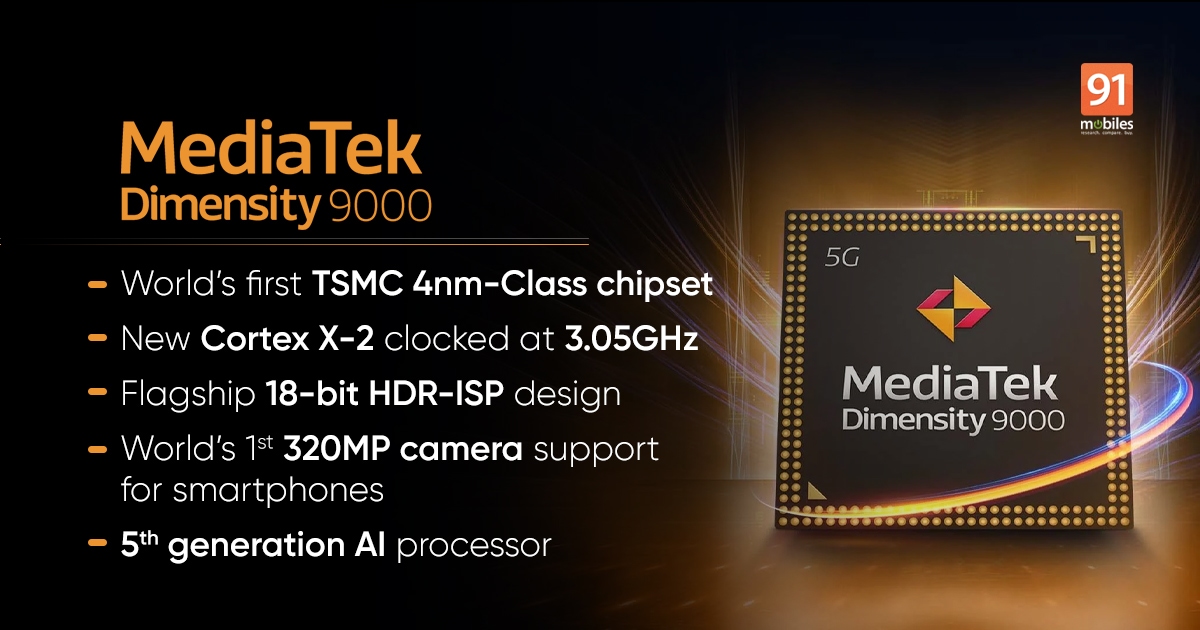 Apart from showcasing the top-of-the-line Dimensity 9000 SoC, MediaTek also talked about its siblings in the form of the Dimensity 8000 series, which comprise Dimensity 8000 and 8100. These SoCs are based on the 5nm TSMC N5 process, and come with ARM Cortex-A78 cores. The four powerful cores run at 2.75GHz (Dimensity 8100’s cores are tuned at a slightly higher clock speed of 2.85GHz), whereas the four power-efficient cores are clocked at 2.0GHz, balancing power and efficiency well. Combined with Mali-G610 MC6 GPU and MediaTek HyperEngine 5.0, the chipsets promise an enjoyable gaming experience. Adding to that is the support of WQHD+ displays with a refresh rate of up to 120Hz, or FHD+ displays that offer refresh rates of up to 168Hz. For imagery, the SoCs support up to 200MP cameras. The chipsets also score high on connectivity support. Now, we just have to impatiently wait for the launch of smartphones with these chipsets, which brings us to…

OnePlus x MediaTek: a true-blue flagship on the cards 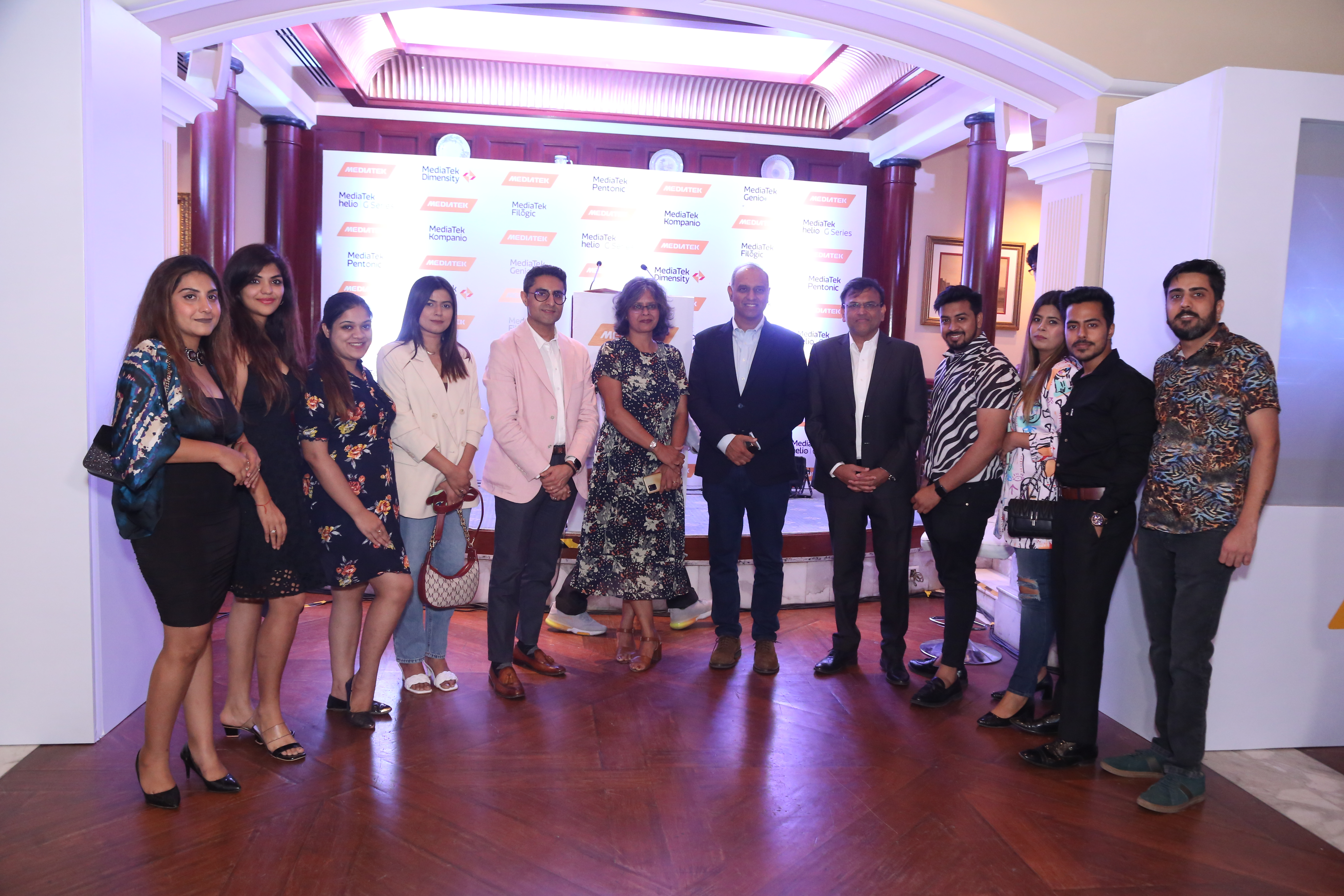 Over the years, MediaTek has built a strong partnership with smartphone OEMs. But among its most notable association is the one with OnePlus. Last year, OnePlus leveraged the MediaTek Dimensity 5G Open Resource Architecture to equip its Nord 2 with a custom chipset that offered enhanced AI capabilities, dubbed Dimensity 1200-AI. 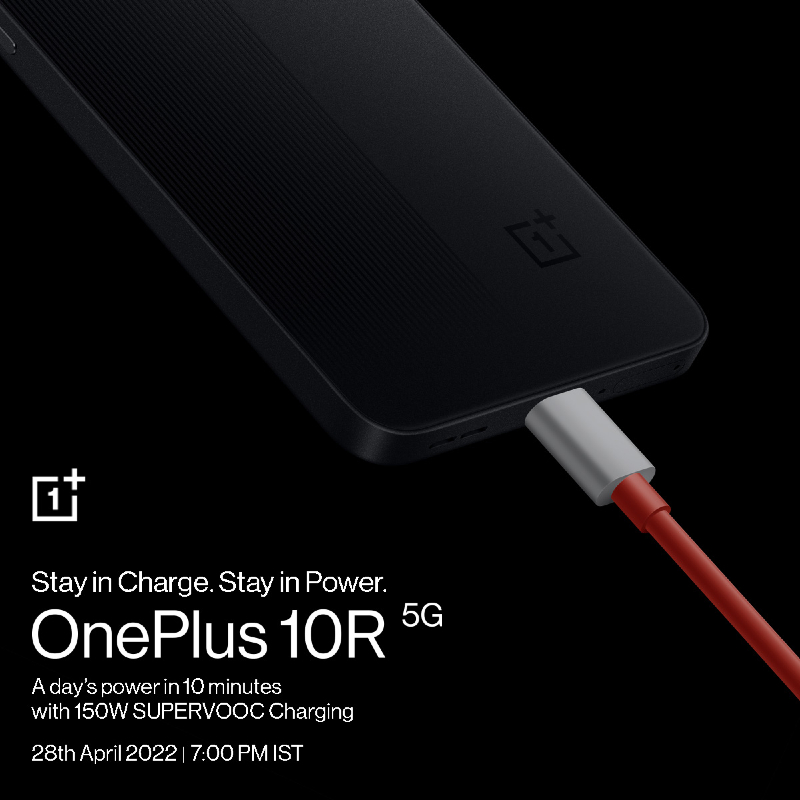 This year, OnePlus will be powering its upcoming flagship with MediaTek’s chipset. While the launch of the device wasn’t revealed at the event, it’s now known that the OnePlus 10R will be hitting the shelves on April 28th and it draws power from MediaTek Dimensity 8100-MAX. The exclusive chipset is customised by OnePlus utilising Dimensity 5G Open Resource Architecture. Navnit Nakra, India CEO and Head of India Region for OnePlus mentioned at the event that “At OnePlus, we are committed to creating user-centric technology that provides the best possible experience for our community, a vision that is shared by our friends at MediaTek. We are taking a major step forward in this regard with our latest collaboration for the upcoming ‘R’ series product.“

Ready for the future

As a brand, MediaTek isn’t sitting on its laurels, and is continuously pushing the boundaries of what our devices can do. It was the first chipset brand to introduce 5G-enabled smartphones in India. And while 5G is yet to launch commercially in the subcontinent, it reiterated how the next-gen cellular network can change the game during the sessions at Technology Diaries. 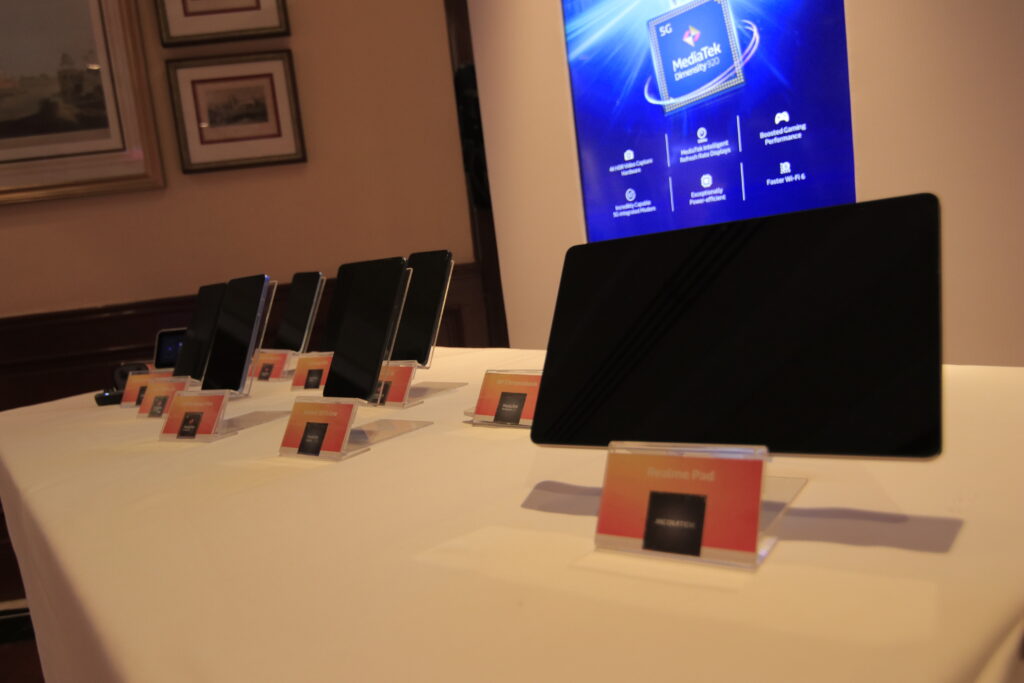 Even though we’re awaiting the latest version of Wi-Fi, i.e., Wi-Fi 6, to be available in our gadgets, MediaTek is working towards the next iteration. It showcased the capabilities of Wi-Fi 7 at the event with its Filogic technology. The no 1 Wi-Fi supplier across routers and electronics devices highlighted that Wi-Fi 7 will offer up to 2.4x faster speeds than its previous generation while improving latency and power efficiency.

Along with showcasing and talking about the latest tech from MediaTek, the Technology Diaries event also had a number of panel discussions. These included what the future may hold with up-and-coming technologies such as metaverse, and how pandemic has resulted in an explosion in the gaming category. The panelists comprised MediaTek spokespeople as well as who’s who of the industry – Rajiv Makhni, Managing Editor, NDTV, Tarun Pathak, Research Director, Counterpoint Research, Upasana Joshi, Principal Analyst, Mobile Phones, IDC India, Prabhu Ram, Head, Industry Intelligence Group, Cybermedia Research (CMR) and more. 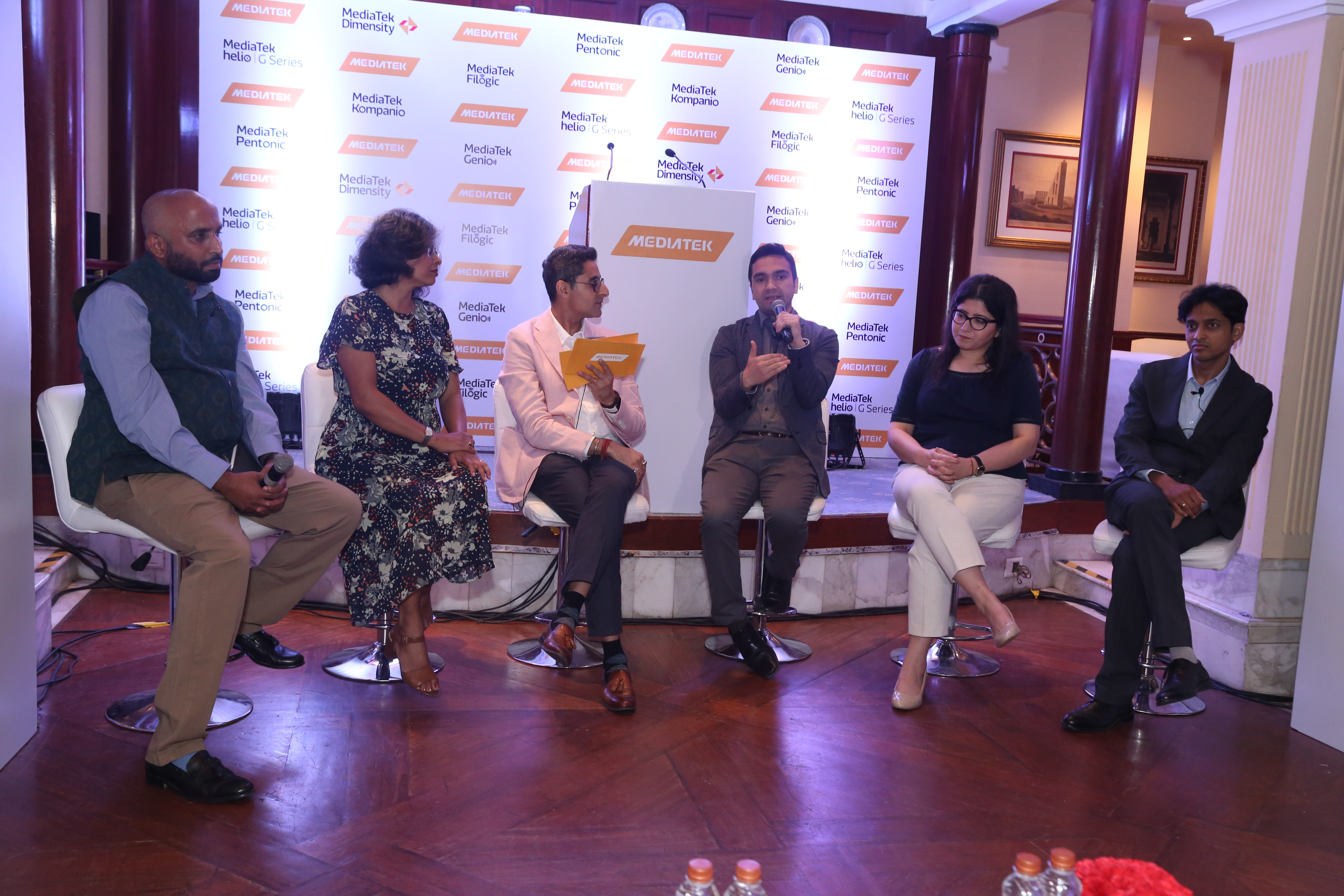 The latest Technology Diaries event was a perfect showcase of MediaTek’s advancements in technology and how it’s making our lives easier by making the devices around us smarter. Whether it’s the smartphone that has become more than a communication medium, or our smart TVs, Wi-Fi routers, and more, MediaTek is pushing the envelope further.