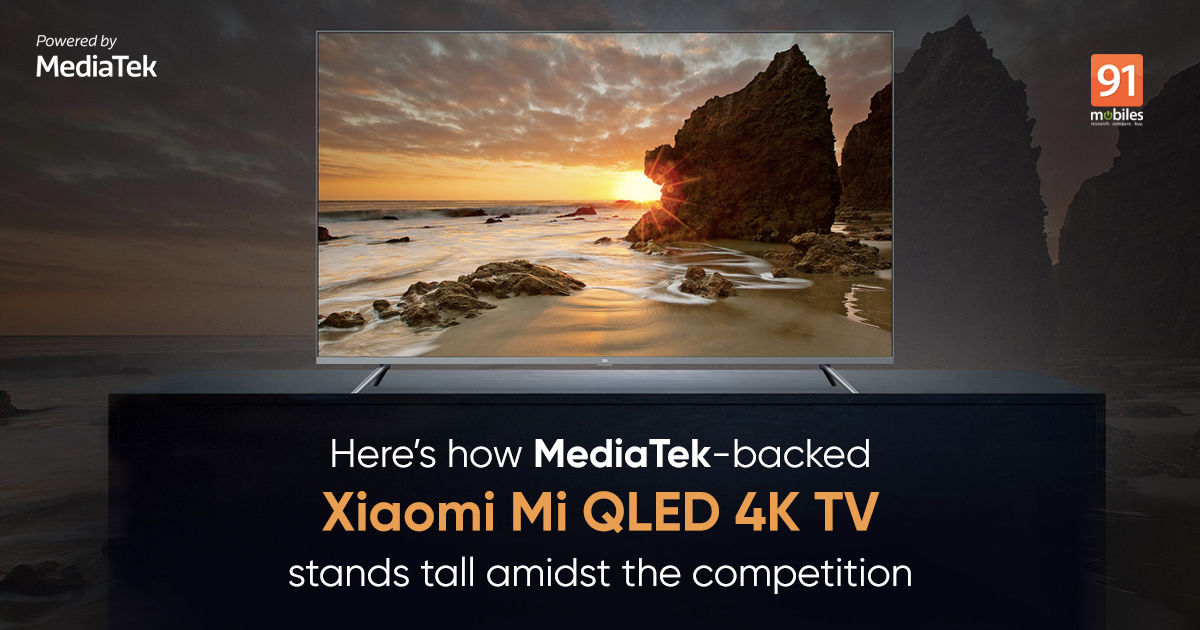 To say that Xiaomi bucked the trend and single-handedly democratised smart TVs in India would be a bit of an understatement. The tech giant has been working on its smart TV portfolio for years now, and its offerings undercut competing smart TVs from the likes of Samsung and Sony by a significant margin. However, much has been said about the picture quality disparity between the aforementioned brands. Enter Xiaomi’s latest contender in the TV space, the Mi QLED 4K, which features not only a state-of-the-art display and loaded specs but is backed by MediaTek’s quad-core CPU. In this article, let’s look at what the Mi QLED 4K brings to the table.

As its moniker suggests, the Mi TV QLED 4K is backed by QLED technology. For the uninitiated, QLED TVs are essentially LEDs, albeit ship with a quantum-dot filter between the LED backlight and the screen. Consequently, QLED panels can reproduce better, richer colours and offer significantly higher peak brightness too. Suffice to say, the Mi TV QLED 4K leaves no stone unturned in the display department either and the set ships with Quantum Dot nanocrystals which emit colours covering 100 percent of the NTSC and DCPI-3 colour space. What’s more, the unit’s 55-inch panel is plenty big to enjoy 4K content to the fullest and as an added bonus, the Mi TV QLED 4K supports all three popular HDR formats, namely HDR 10, HLG, and Dolby Vision. 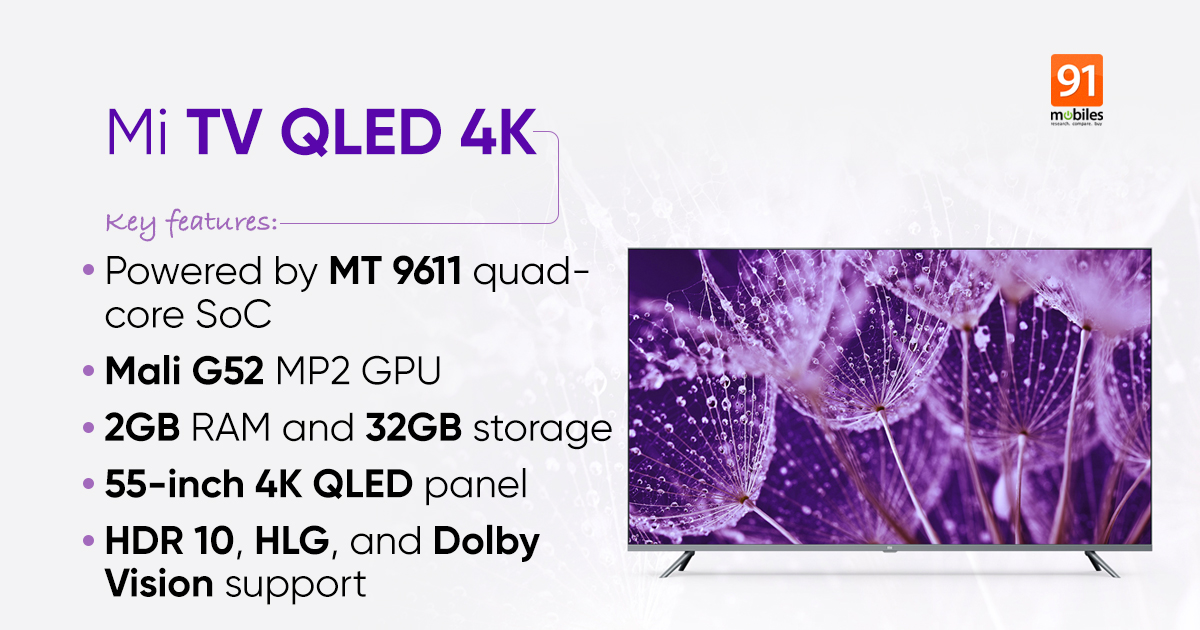 That’s not all though, as the company has invested a lot of tech to elevate the audio experience on the Mi TV QLED 4K too. To that extent, the TV ships with a six-speaker system to offer a powerful 30W output. The speakers comprise four mid-range speakers and two tweeters, ensuring the Mi TV QLED 4K is more than capable of reciprocating the highs and the lows down to a tee. 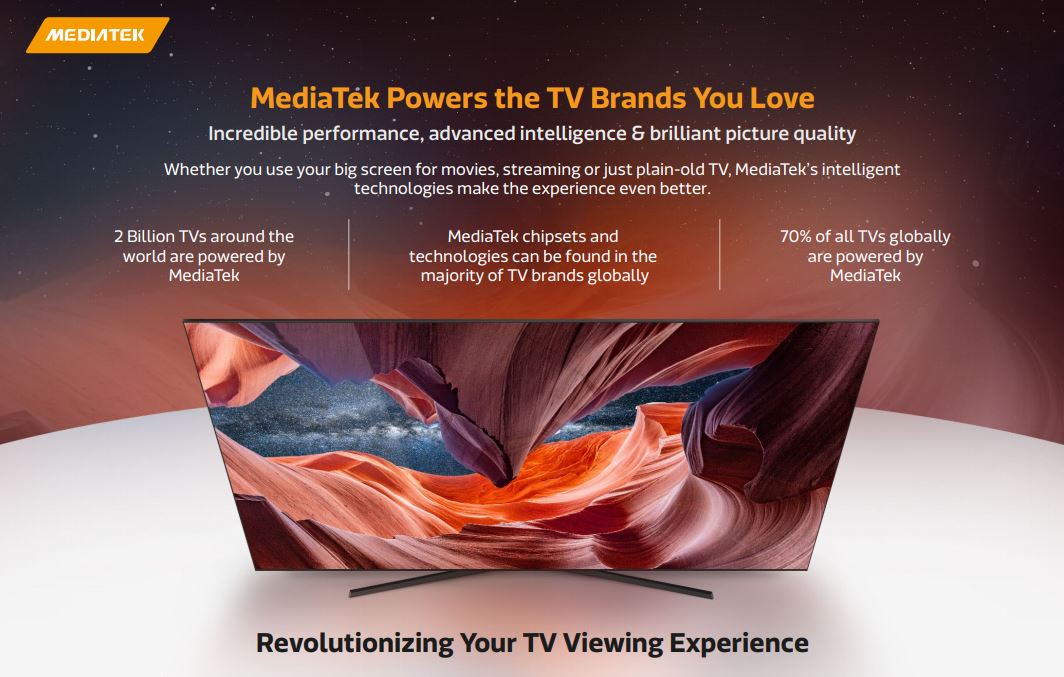 As prefaced previously, the Xiaomi Mi TV QLED 4K is a smart TV, and powering the smarts on the unit is MediaTek’s quad-core MT9611 processor. The chipset is backed by 2GB of RAM and 32GB of built-in storage and comes sporting the Mali G52 MP2 GPU that’s tasked with handling graphical compute. It goes without saying that MediaTek’s quad-core SoC is more than capable of handling anything you’d throw at it. Be it seamlessly switching between the TV’s two different operating systems to running a plethora of apps and games available on the Google Play Store, the MT9611-backed Mi TV QLED 4K can do it all. A responsive CPU is crucial to offer a premium, no-compromise user experience, which is why it’s not surprising to find the MediaTek MT9611 SoC at the heart of the Mi TV QLED 4K. 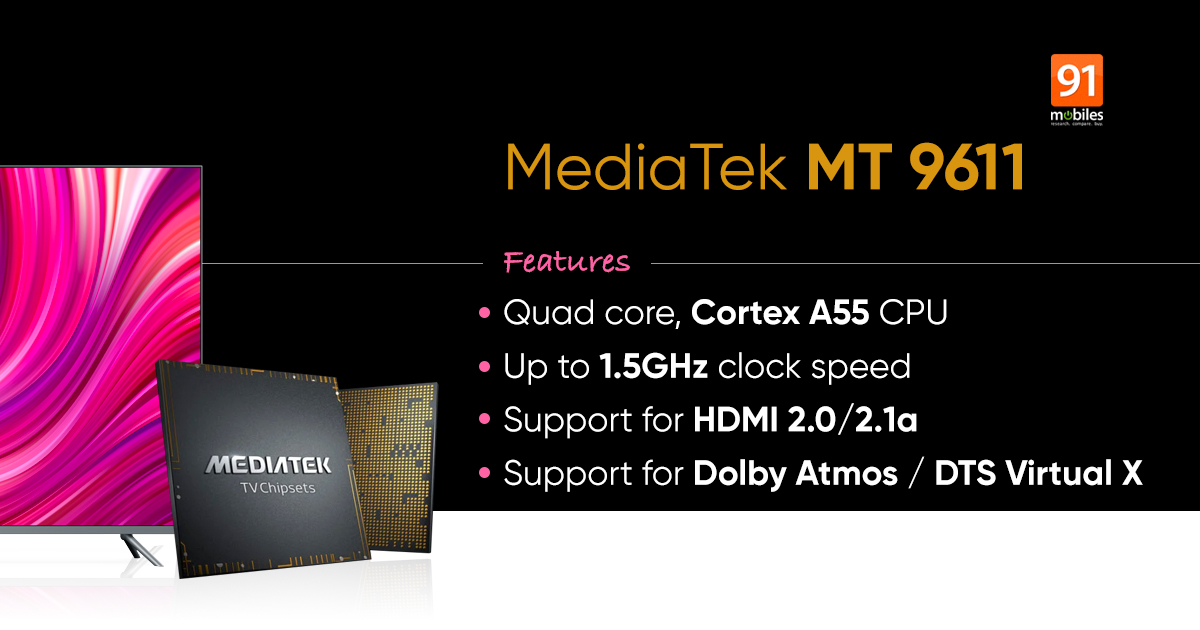 What good is a smart TV if it skimps on the necessary ports and connectors to make the most of top-end accessories, right? Thankfully, the MediaTek MT9611 quad-core SoC ensures the Mi TV QLED 4K isn’t starved for support as the chipset is compliant with HDMI 2.1a ports, along with Dolby Atmos and DTS Virtual X. Correspondingly, the Mi TV QLED 4K should play well with whichever soundbar buyers plan to pair the set with down the line.

Unlike most smart TVs in the market, Xiaomi’s offering ships with not one, but two operating systems, including the company’s homegrown PatchWall OS and Android 10 OS. PatchWall OS offers a multitude of different services and depending on the model, offers different content partnerships too. What’s more, the revamped UI for the same now has separate tabs for movies and shows available in HDR. As a result, buyers opting for the Mi TV QLED 4K will no longer have to look up high-quality shows and can easily pick one from the curated tab. And, should buyers want to install games or apps on their Mi TV QLED 4K, then they can choose from millions of options as the TV comes with Google Play Store too. Of course, MediaTek’s MT9611 SoC plays a pivotal role and ensures smooth operations and seamless switching between the two OSes.