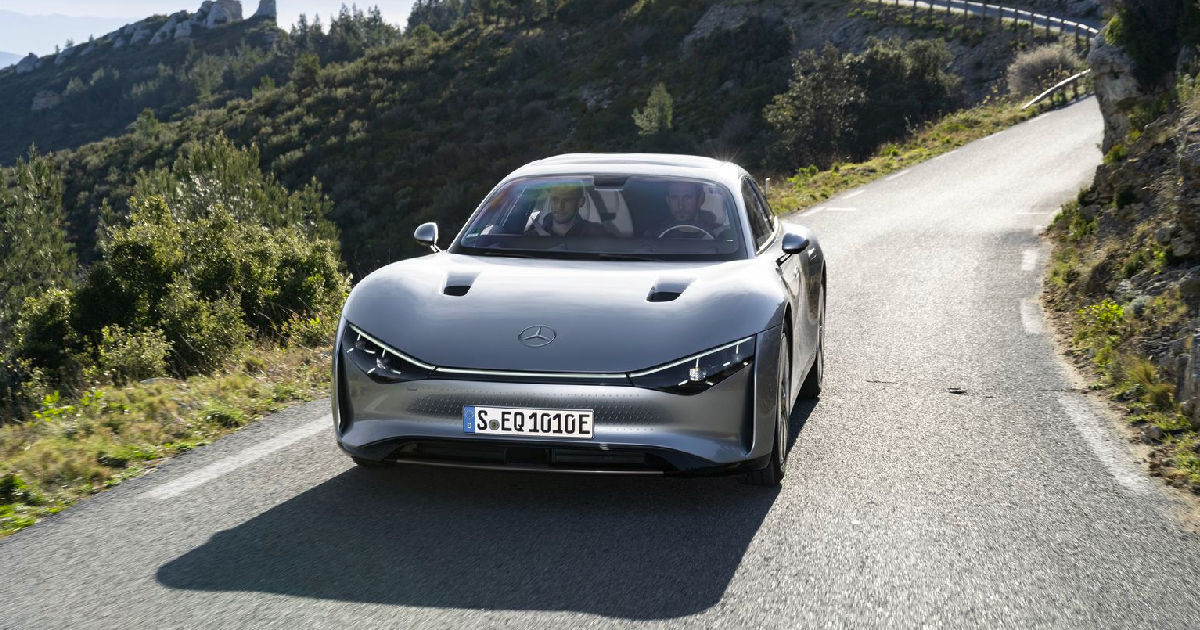 The Mercedes-Benz VISION EQXX concept electric car covered over 1,000 kms on a single charge in a real-world test that was recently conducted independently by the automaker. This 1000-km driving range is one of the longest real-world distances covered by any EV on a single charge and more than twice the typical range most EVs on the road today can travel. The VISION EQXX, which is still under R&D, started the journey from Germany to Southern France, travelling at an average speed of 54 mph (around 87 kmph) and ending with with a 15 percent charge remaining on the battery.

The Mercedes-Benz VISION EQXX was first teased in 2020 and was endorsed as “the highest efficiency electric car in the world”. The car was officially unveiled in January 2022 and serves primarily as a base for the experiment to test battery efficiency. It serves as a basis for a production car that will rival luxury EVs like the Porsche Taycan, Audi E-tron GT and Tesla Roadster.

The Mercedes-Benz VISION EQXX, in its test ride, faced real-world conditions such as traffic, varied road conditions including construction, mountainous terrain and changing weather. The trip began from Sindelfingen in Germany and proceeded across parts of Switzerland and Italy before finally ending at the port town of Cassis near Marseille in the South of France. Temperatures fluctuated in the range of 3 to 18 degrees celsius, with the car being tested in chilly mountain air to more temperate conditions. Factors such as steep hill climbing and the effects of cold weather can wear down a vehicle’s battery much faster than when driving on flat surfaces or in warmer weather.

“With our successful road trip to the South of France, we’ve shown that efficiency is the new currency,” said Markus Schäfer, member of the Board of Management of Mercedes-Benz Group AG and CTO

The VISION EQXX travelled at an average speed of 87 kmph (54 mph) and achieved a top speed of 140kmph (87mph) on a German autobahn (expressway). At the end of the journey, the VISION EQXX had 15 percent charge remaining, good for another 140km (87 miles). According to the official press release from Mercedes-Benz, the test was authenticated officially by the certification body TÜV Süd. Mercedes-Benz delivered a battery efficiency of 8.7 kWh per 100 km(7.1 kWh per 62 miles). This can be crowned to be one of the best in the industry and lives up to the simulated efficiency of 10 kWh per 100 km reported by the German automaker earlier.

Tata Nexon EV with range up to 400km to launch on April 20th: report

Apple to launch ‘iOS in the Car’ in collaboration with Ferrari, Mercedes-Benz and Volvo next week