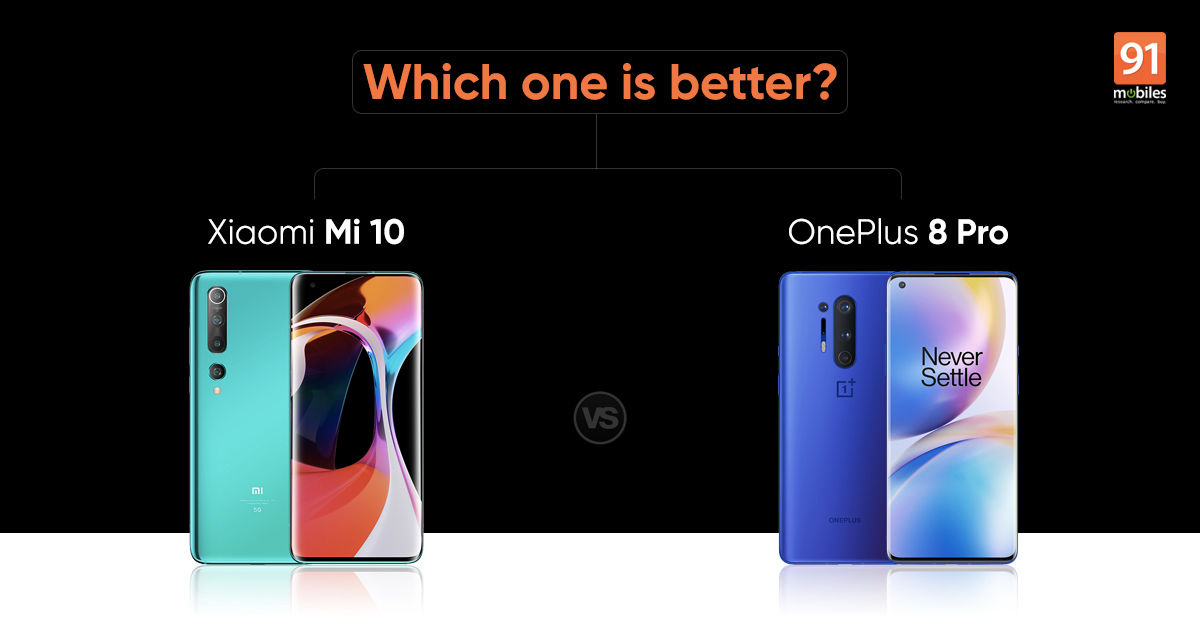 Xiaomi has launched its flagship Mi 10 smartphone in India. It’s an impressive smartphone, at the very least on paper, and can give other handsets in the premium category a run for their money. In India specifically, the biggest arch-rival of Mi 10 will be the OnePlus 8 Pro – the latest premium flagship smartphone from OnePlus. Let’s stack the two devices against each other to see which one is better in terms of specifications.

OnePlus 8 Pro and Mi 10 both flaunt curved punch-hole displays and glass-sandwich design, but that’s where the similarities end. The OnePlus 8 Pro is slightly bigger than the Mi 10, owing to its 6.78-inch Super AMOLED display that bears 120Hz refresh rate, QHD+, and Motion Graphics Smoothing. The rear panel of the phone sports vertically-aligned cameras mounted on the centre of the frame. As for the edges, the right spine of the phone sports Alert Slider and power button, while the left houses volume buttons. The Type-C charging and audio port is at the bottom along with speaker grille. The OnePlus 8 Pro is the company’s first smartphone with an IP68 rating, which means it can survive underwater up to 1.5 meters for 30 minutes.

In contrast, the Mi 10 ships with a 6.67-inch E3 AMOLED display that bears only full-HD+ resolution and 90Hz refresh rate. It’s also worth mentioning that OnePlus 8 Pro has higher 90.8 percent screen-to-body compared to Mi 10, which touts 89.8 percent screen-to-body ratio. The Mi 10’s rear panel features quad rear cameras aligned in the top left. The volume rocker and power button both are on the right spine of the phone. The bottom edge has Type-C charging port and speaker grille. Notably, the Mi 10 doesn’t have any IP68 rating.

Both OnePlus 8 Pro and Mi 10 rock flagship-grade Snapdragon 865 SoC with Adreno 640 GPU and Snapdragon X55 modem for 5G connectivity. There shouldn’t be any noticeable difference in terms of performance on these smartphones unless you go for 12GB RAM + 256GB storage variant of the 8 Pro. The latter will be a tad faster than the Mi 10 top-end model, which packs 8GB RAM and 256GB storage.

The Mi 10 runs MIUI 11 atop Android 10 out of the box, while OnePlus 8 Pro has OxygenOS-based Android 10 taking care of its software side of things. The OxygenOS is regarded as one of the best custom Android skins in the industry; however, if you’re looking for more customisation go with MIUI 11, which Xiaomi claims is ad-free on Mi 10.

The OnePlus 8 Pro has been priced in India at Rs 54,999 for the 8GB + 128GB option, while the 12GB + 256GB variant costs Rs 59,999. The handset comes in Onyx Black, Glacial Green and Ultramarine Blue colour options and will be made available on Amazon.in in the country from May 11th.

Mi 10 price in India is set at Rs 49,999 for the base 8GB RAM and 128GB storage variant. The phone’s 8GB RAM + 256GB storage variant has been priced at Rs 54,999. The handset will be available for sale in Coral Green and Twilight Grey colours. The Mi 10 India sale date has not been announced yet but the company has already started taking pre-orders for the smartphone starting 2 pm today on Amazon.in.