When one thinks of a DIY smart home setup, the most basic ingredients that usually come to mind are smart lights, smart plugs and a smart speaker to enable voice control. However, security cameras are a crucial component as well, and there’s no dearth of options in this segment. As part of its latest Smarter Living extravaganza that saw a bunch of devices across various categories, Xiaomi also introduced the Mi 360 Home Security Camera 2K Pro. That’s a mouthful of a name, but highlights exactly the kind of device we’re dealing with here – a 360-degree camera that can be used for home security, boasting 2K resolution and some pro-grade features which are hard to find in this category. Let’s take a closer look at the camera to see how well it works, though technically speaking, I will also let the camera take a look at me as part of the process. 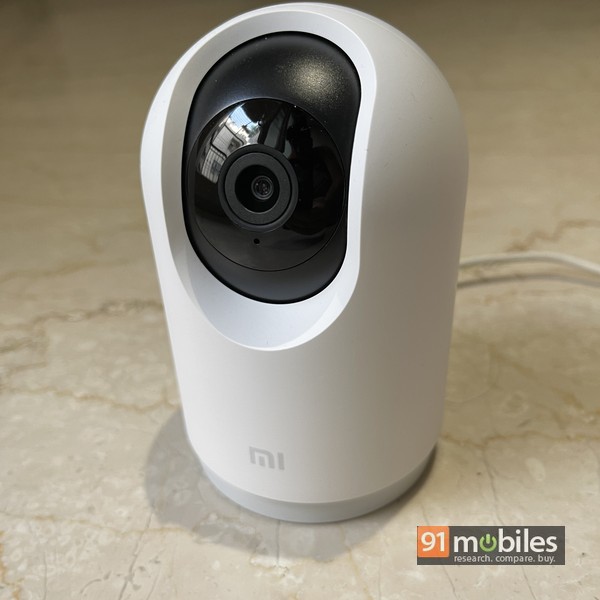 For the purpose of this review, the Mi 360 Home Security Camera 2K Pro will be henceforth referred to as ‘the camera’ or the ‘device’ (shortening and abbreviating it to M3HSC2P seems weird, frankly), for the sake of convenience and protecting my fingers from extreme fatigue due to typing. Xiaomi’s portfolio in India already includes a couple of home cameras – a basic one and a 360-degree FHD model. The new model comes in as an upgrade to the latter, giving up the familiar hourglass design in favour of a dome-shaped body that rotates on its base. The 3MP, f/1.4 camera can pan and tilt to cover a 360-degree area without any blind spots, and can shoot in 2K (2,304 x 1,296 pixels) resolution, a feature not offered by anything else in this segment, to my knowledge. The base sports a micro-USB port for power, and you’ll also see a speaker grille at the rear of the white body. 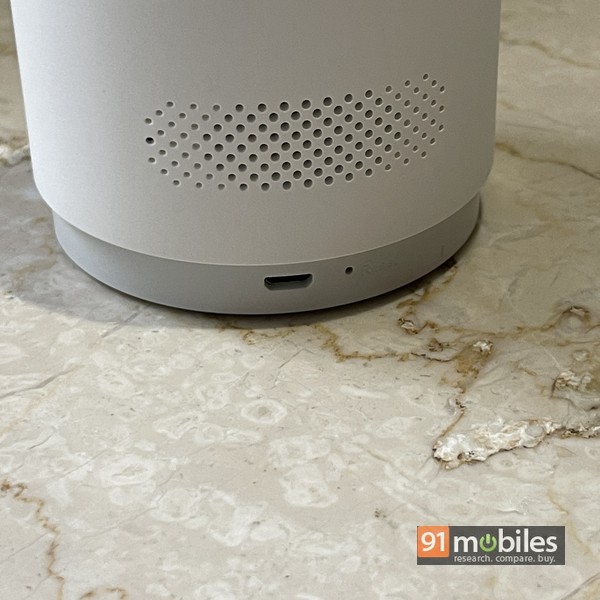 Apart from the high-resolution shooting, the camera boasts some more features that stand out, and possibly earn it its Pro moniker. For one, there’s dual-band Wi-Fi support. While most other cameras only offer support for 2.4GHz frequency, the new camera from Xiaomi adds 5GHz Wi-Fi support. This enables the high data speeds required to stream high-res video, provided your internet bandwidth supports it. Then, there are dual mics for voice calls instead of the usual one, and a 940nm infrared light sensor for night vision that enables streaming / recording in full colour in low light. And as far as storage is concerned, you get three options – you could insert a microSD card (up to 32GB cards supported), or use NAS storage if available. Or you could just make use of free 7-day rolling cloud storage provided by Xiaomi that can store motion-triggered video clips. 7-day rolling storage means your clips will be stored for a period of a week, and when the storage gets full, the oldest ones will be deleted to make space for new clips. The provision of free cloud storage is super useful, and means you don’t really need to add a microSD card or a NAS storage device, especially if your main use case for the camera is as a surveillance or home monitoring device. The camera pairs up with the Mi Home app, available on both Android and iOS, and the setup process is simple enough. All you need to do is power up the camera using the bundled micro-USB cable and 2A adapter, and then scan the QR code on its base using the Mi Home app. After that, the app guides you through the process, and the camera even throws up voice prompts. As part of the process, you can connect the camera to your home Wi-Fi, and since there’s support for dual-band Wi-Fi, you should ideally choose the 5GHz network if you have one available. That would ensure the device gets enough bandwidth for high-resolution streaming, dependent on your network speeds of course. Once set up, you can view the live feed from the camera on your phone, control its view, and other settings… from anywhere in the world. The feed can be viewed on the Mi Home app on Xiaomi TVs as well. And since both Amazon Alexa and Google Assistant are supported, you can even view the feed on compatible smart displays (like the Echo Show or the Google Nest Hub) using just your voice. The setup process for this is simple too, but in my case, I had to disable the Mi Home skill on the Alexa app and enable it again for it to detect the camera as a new device. Also worth mentioning that the camera feed can be rotated and made upside-down, and Xiaomi includes a mounting plate and screws in the retail box in case you want to mount the camera on the ceiling. Apart from letting you view a real-time video feed from the camera, the Mi Home also allows to you capture still images and video clips on-demand, which get stored on your phones local storage. You can even hold two-way voice calls using the Mi Home app on your phone, with people who’re at home near the camera. The dual mics and the speaker on the camera are extremely capable and allow for conversation that can be heard clearly at both ends.

Via the device settings available in the app, you could disable the indicator light on the camera (it’s on by default, indicating the camera is powered on), enable the home surveillance assistant, monitoring period, sensitivity settings, enable alert notifications, manage storage, and specify various other settings too. You can also view previous motion alerts thrown up by the camera, and view video clips recorded by the device automatically on detecting motion. 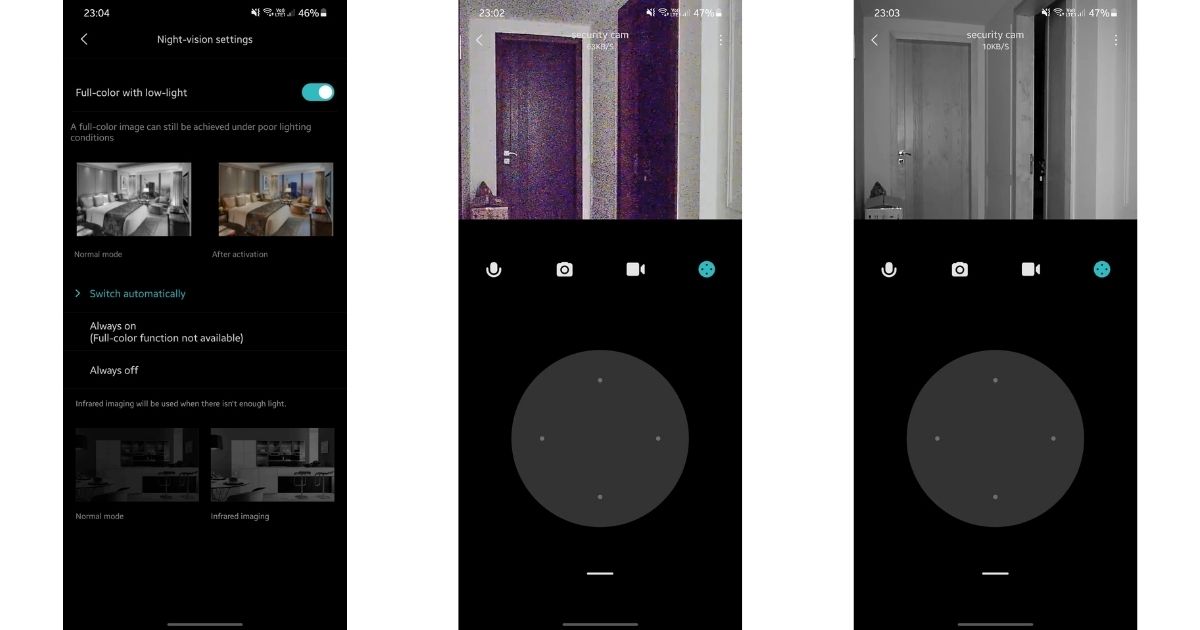 In my usage, I found the Mi security camera to be extremely capable. It faithfully sent alert notifications on the phone on detecting motion, and the AI motion detection can even follow humans if you’ve enabled that setting and it detects a human moving around in its field of view. You can keep the video feed resolution at auto, or set it at 2K to ensure you get high-resolution footage. It looks like capturing clips on detection of just sound isn’t supported though. The recorded video clips captured when motion is detected get stored on the cloud if you haven’t inserted a microSD card in the camera, and you can view them via the alert notifications. Strangely, I couldn’t find an option to view these via the Mi Home app. The camera has a physical shutter for privacy, and this can be controlled via the app. For night vision, you get the option to set video clip recording to full colour, monochrome using infrared imaging, or set it to switch automatically. I found that the footage captured in full colour was quite grainy, especially in very dim lighting, so it’s probably best to leave it at auto or set colour recording to off. In this case, you’ll get black and white clips, but at least the footage looks extremely clear. 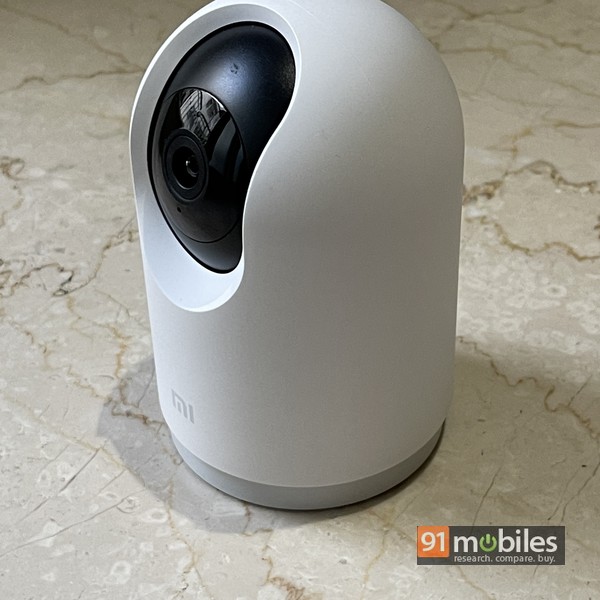 The Mi 360 Home Security Camera 2K Pro (phew) will set you back by Rs 4,499. One of its closest rivals is the Realme Smart Cam 360, which costs Rs 2,999, sports a similar design and offers many of the same features. It even has a sound detection feature that Xiaomi’s new offering lacks. In most other aspects though, the Mi 360 Home Security Camera 2K Pro trumps its rivals, offering unmatched features like high-resolution recording, dual-band Wi-Fi support, and more. For everything it offers, I think it’s well worth a closer look if you want a security camera for home surveillance or monitoring kids and pets in the house.