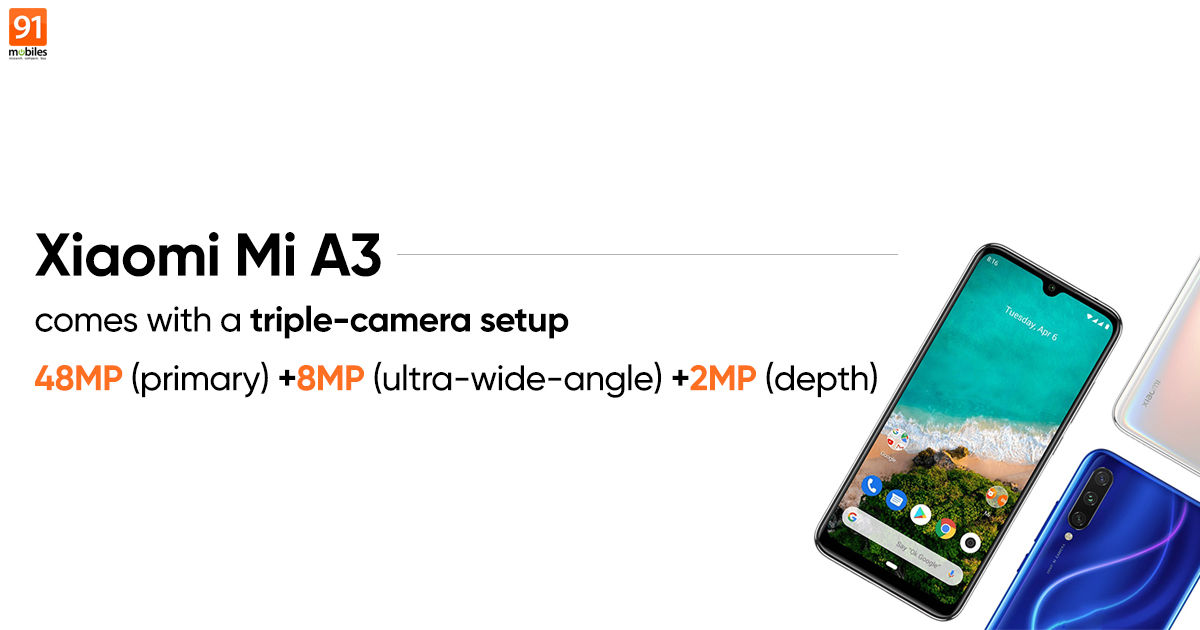 The Mi A3 smartphone has officially been launched in India. The Mi A3 is the successor of last year’s Mi A2 and comes with a bunch of upgrades such as a 32-megapixel selfie camera, triple rear cameras, taller display, AMOLED panel, and an in-display fingerprint scanner. The handset also rocks Qualcomm’s latest Snapdragon 600-series chipset, and as part of the lineup, comes with Android One. The Mi A3 runs stock-Android 9 Pie OS out of the box and is guaranteed for at least two upcoming Android generations – Android Q and R. The phone was originally launched back in July in Spain as the global version of Xiaomi’s Mi CC9e smartphone.

Xiaomi Mi A3 price in India

The Xiaomi Mi A3 price in India is Rs 12,999 for the base handset’s base 4GB RAM + 64GB storage variant, while its top-end 6GB RAM + 128GB storage comes with a sticker price of Rs 15,999. The Mi A3 comes in three colour options that have been uniquely named as Not Just Blue, More Than White, and Kind of Grey. It will go on sale in India on August 23rd via Mi.com, Amazon.in, and Mi Home stores. Buyers will get Rs 750 cashback on HDFC Bank credit cards and an additional Rs 250 cashback (so a total of Rs 1,000) on EMI transactions on credit cards by the bank. Airtel customers buying Mi A3 will get double the data on the Rs 249 prepaid recharge.

The major highlight of the Mi A3 includes its cameras and display. The handset is the first in the lineup to come with an array of sensors at the back and AMOLED screen with an optical fingerprint scanner. For photography, The Mi A3 packs a 48-megapixel Sony IMX586 primary sensor with f/1.7 aperture aided by an 8MP ultra-wide-angle lens and a 2MP depth-sensing camera. The front camera features a 32-megapixel shooter for selfies and video calling.

The fascia of the Mi A3 has a 6.08-inch AMOLED screen with an HD+ resolution, which is a bummer. However, the phone also packs an in-display fingerprint scanner that unlocks the device via a simple tap on the screen. Under the hood, the phone packs Qualcomm Snapdragon 665 mobile platform, which is the successor of Snapdragon 660 SoC. Notably, the same chipset also rocks Realme 5 smartphone that was recently launched in India. The latter is more affordable than the Mi A3.

The phonemaker ships the Mi A3 with up to 6GB RAM and 64GB storage, which can be further expandable using a microSD card. Other features include a 4,030mAh battery with 18W fast-charging, a glass-sandwich design, and connectivity options such as 4G LTE, Wi-Fi, Bluetooth 5.0, 3.5mm audio jack, USB Type-C, and GPS with GLONASS. The device is said to have a larger acoustic chamber that helps deliver 60 percent better audio.