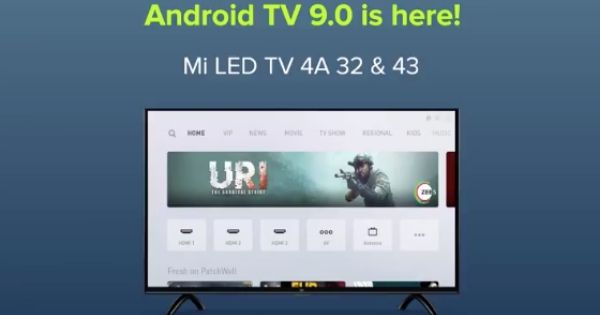 Xiaomi has finally started roll out the Android Pie based Android TV 9.0 software update for the Mi TV 4A series. The company has been testing the update since July this year and it is now ready for primetime. The update is rolling out for the Mi TV 4A 32-inch and the Mi TV 4A 43-inch variants in India. Those who own these Mi TV models should look out for the update notification and install it as soon as it’s available. Android TV 9.0 update includes Chromecast support, Data Saver mode, and Google Play Store access.

The new Mi TV update is being rolled out in phases and, therefore, can take a few days to reach all devices in the country. A notification should be available on the supported models once the update is ready to be downloaded and installed. It is available as an over-the-air update and is around 800MB in size.

Thanks to the inclusion of the Play Store, users can now download several Android TV supported apps such as YouTube, and also have access to Play Movies. The changelog also reveals that the update brings support for the Netflix and Amazon Prime Video apps on the selected Mi TV 4A models. Prior to this, the apps weren’t working as they require separate certification.

Mi TV 4A owners can now also use the Chromecast feature to stream content on to their TV via their smartphone or any Chrome supported device. As per the changelog, a new feature called TV Lock is also included in the update. Xiaomi has also included a new Data Saver mode, which allows users to stream content when connected to a mobile hotspot. In this mode, the user can still stream around 3 times more content without having to worry about the data running out. We would have to test this out to see how true this is.