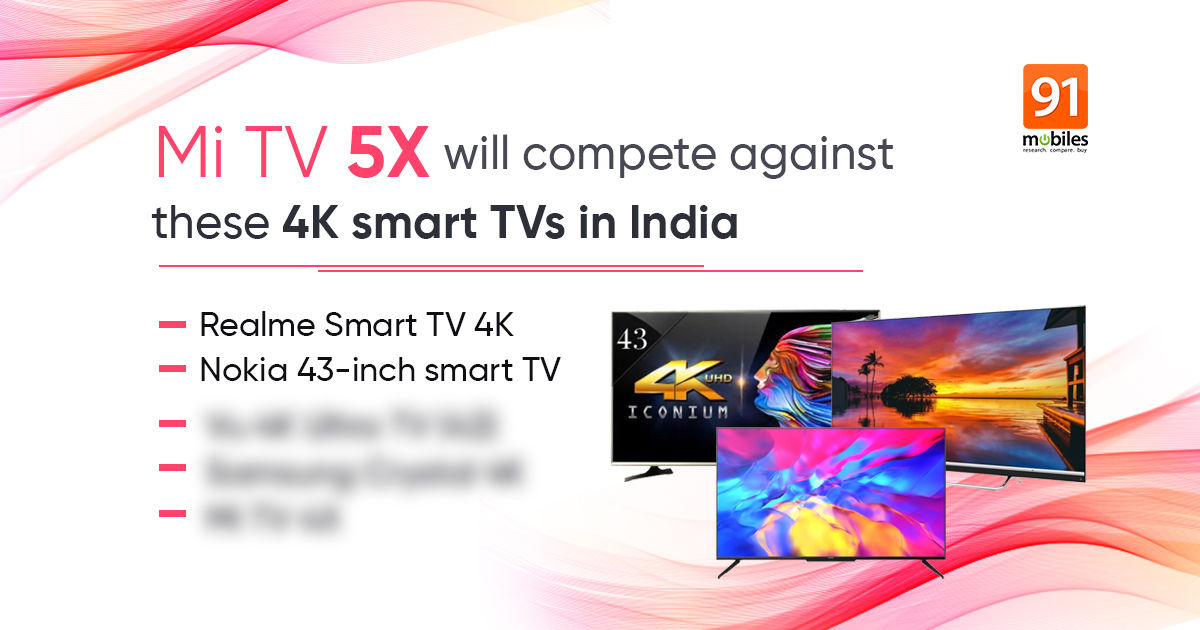 Xiaomi has introduced a new TV series lineup, called Mi TV 5X, in India. The lineup includes three models: 43-inch, 50-inch, and 55-inch, which are likely to turn a few heads owing to their impressive specifications and mouth-watering price tag. While the TVs are yet to go on sale in India, we are presuming that it’ll be the Mi TV 5X 43-inch that is likely to attract more buyers. It’s the most affordable model in the lineup and comes with pretty much the same features as the flagship Mi TV 5X 55-inch model. That said, the Mi TV 43-inch would be facing some fierce competition from some of the popular offerings in the market. We take a look at them here in this article, but before we get to that here’s a quick look at Mi TV 4X key specs and price in India: 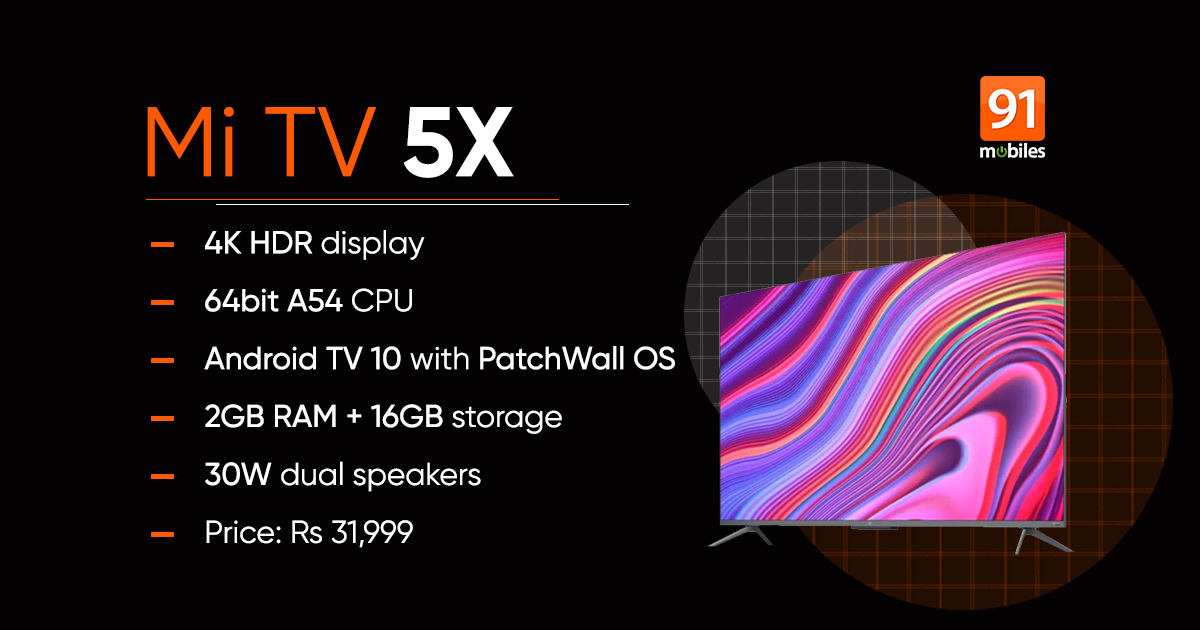 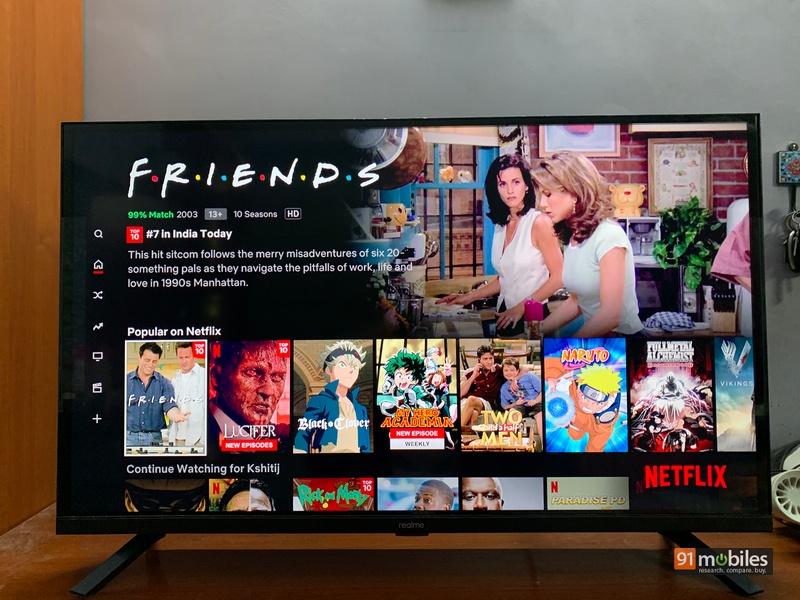 Much like Mi TV 5X 43-inch, this smart TV from Realme also packs a 43-inch display with 4K resolution and Dolby Vision support. It runs Android TV 10 with support for Google Assistant and Google Play Store out of the box and comes loaded with video streaming apps such as Prime Video, Netflix, and YouTube among others. The Realme Smart TV 4K (43) has standard connectivity options, which include three HDMI ports, two USB ports, one optical audio out, one Ethernet port, one AV-in, and one TV Tuner input. As for wireless connectivity, you get dual-band WiFi, Bluetooth v5.0, and infrared support. The TV has quad speakers, fine-tuned by Dolby Atmos, Dolby Audio, and DTS HD, but they offer 24W output as opposed to 30W on Mi TV 5X.

Having said that, the Realme Smart TV 4K (43) is cheaper than Mi smart TV. The former is currently selling in India at Rs 30,999. 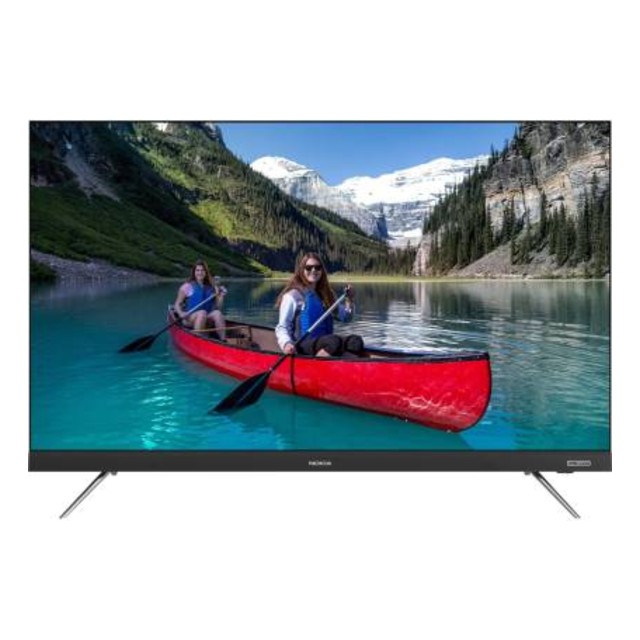 The Nokia 43-inch smart TV has a lot in common with Mi TV 5X. They both offer a 4K HDR display, Android TV OS (although the Nokia TV has a slightly older version), built-in Chromecast, standard wireless and wired connectivity options, and support for OTT apps such as Netflix, Amazon Prime Video, and YouTube. The Nokia TV is powered by a CA55 quad-core processor coupled with Mali450 GPU, 2.25GB of RAM, and 16GB storage. Lastly, the TV has 39W sound power that comprises 24W QuatroX speakers and 15 W tweeters, to ‘deliver a 360-degree audio projection’. 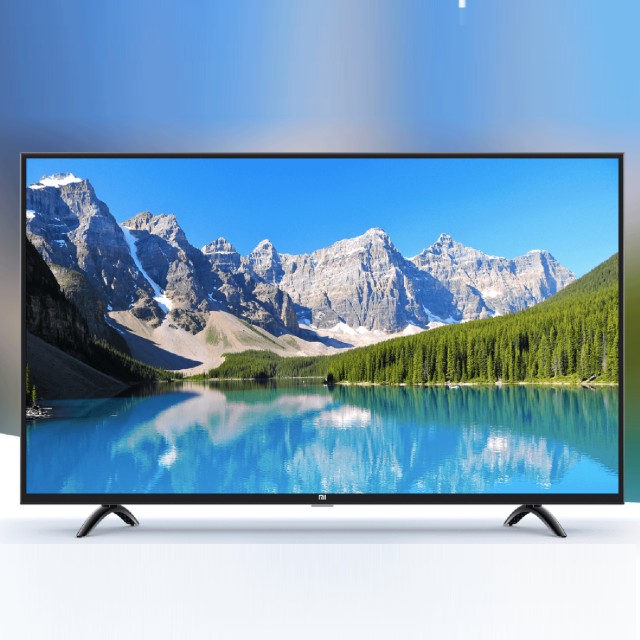 Mi TV 4X 43-inch is one of the most successful TVs from Xiaomi. The TV has managed to pull some buyers and would continue to do so unless the company decides to discontinue it. The Mi TV 4X 43-inch specifications include bezel-less 43-inch display with 4K (3,840 x 2,160p) resolution, Android 9 TV platform, and Xiaomi’s PatchWall 2.0 custom interface. The Mi TV also has built-in a native data saver mode. The display features a 60Hz refresh rate, 178-degree viewing angle, narrow bezels, and Xiaomi’s Vivid Picture Engine. Under the hood, it rocks a 64-bit quad-core A53 chipset, aided by Mali-450 GPU, 2GB of RAM and 8GB storage. As for the audio, the TV packs downgraded 20W built-in speakers, which are backed by Dolby Audio as well as DTS-HD, from 24W. 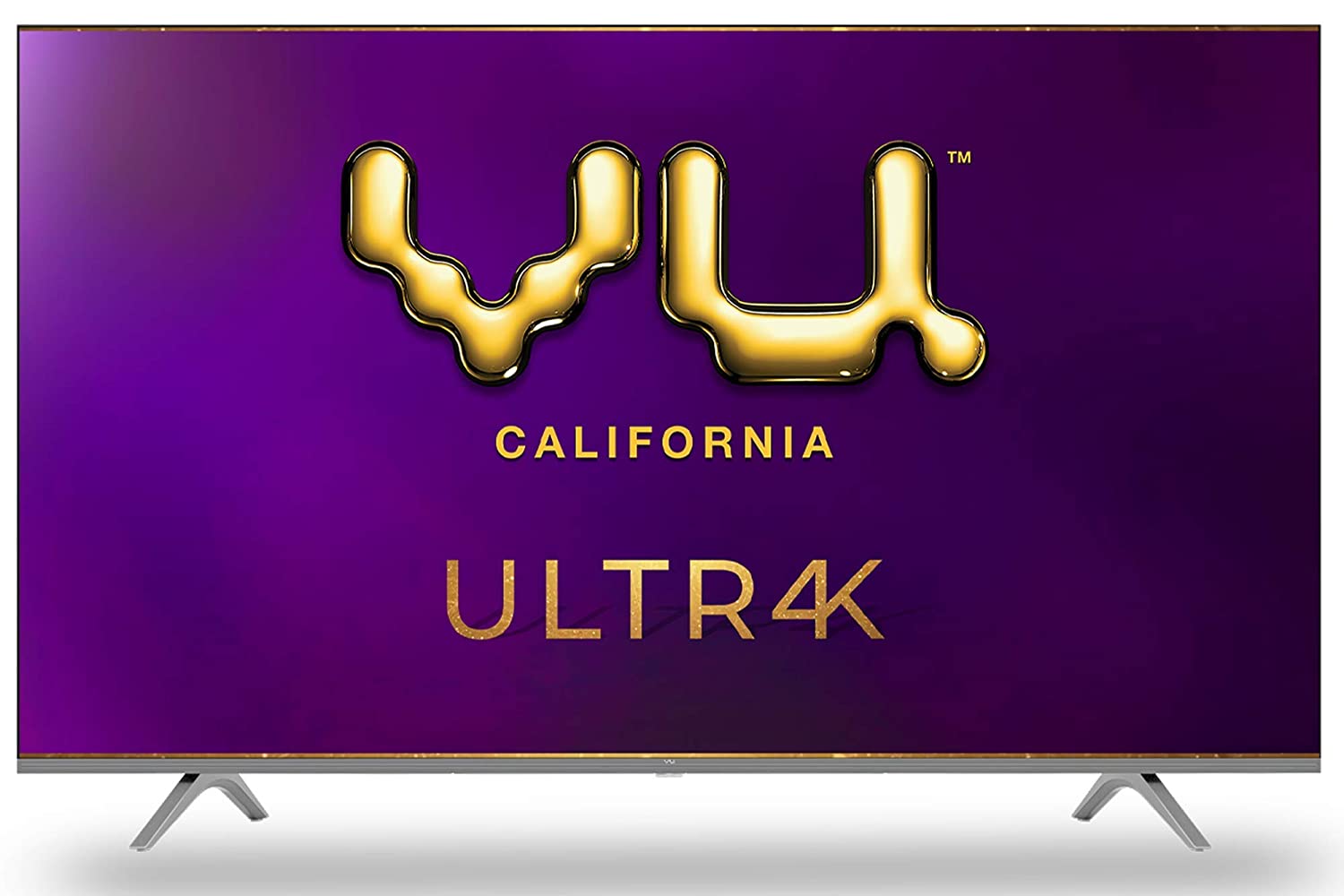 Vu 4K Ultra TV 43-inch is another popular 4K TV that you can buy in India right now. The TV is retailing in India at Rs 34,990. The Vu 4K Ultra TV (43) ships with a 43-inch ultra-edge DLED (Direct LED) display that is said to include an array of LEDs behind the LCD panel to illuminate the screen and bear “40 percent enhanced brightness”, Dolby Vision, pro-picture calibration mode, HDR 10, active contrast, cricket mode, and backlight control. The TV also features dual speakers with 24W sound output, Dolby Audio and DTS Virtual:X surround sound technologies. It’s powered by a 64-bit quad-core chipset paired with 2GB RAM and 16GB storage onboard. Other features include Chromecast, Parental control, and Upbeat Surround Sound feature that enhances the audio output to provide an immersive experience. 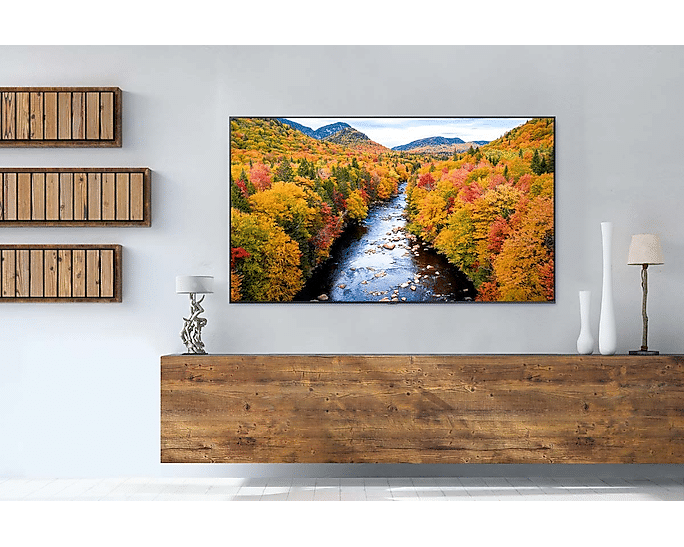 Mi TV 5X could also face competition from Samsung’s Crystal 4K UHD smart TV. The 43-inch TV from the South Korean manufacturer comes with a 4K display that bears 3,840 x 2,160p resolution and HDR10+ support. It runs TizenOS out of the box and works with Alexa and Google Assistant. The TV also packs 20W speakers with Dolby Digital Plus and Q-Symphony sound support. Connectivity options include 3 HDMI ports, a USB port, HDMI, Bluetooth, and Wi-Fi, among other things. 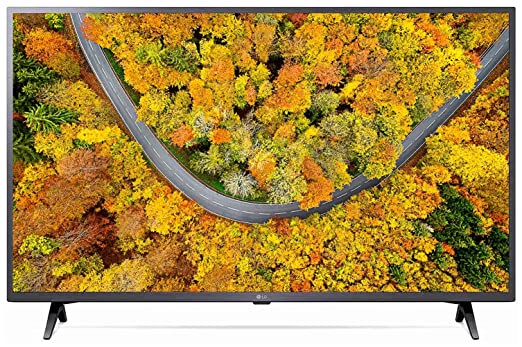 LG’s 4K 43-inch smart TV runs WebOS out of the box instead of Android. The TV doesn’t support Google Play Store, but you have the option to download apps from the Web Store. It supports Netflix, Prime Video, Disney+ Hotstar, Apple TV, SonyLIV, Discovery+, Zee5, Voot, Google Play Movies & TV, YuppTV, Youtube, and Eros Now. The LG 4K Ultra HD TV has built-in Google Assistant and Alexa, along with Apple Airplay 2 and Homekit. The display bears 3,840 x 2,160p resolution and a standard 60Hz refresh rate. It has a quad-core processor 4K under the hood paired with 1.5GB RAM and 8GB storage onboard. As for the sound, the LG smart TV packs 20W speakers with AI Sound. 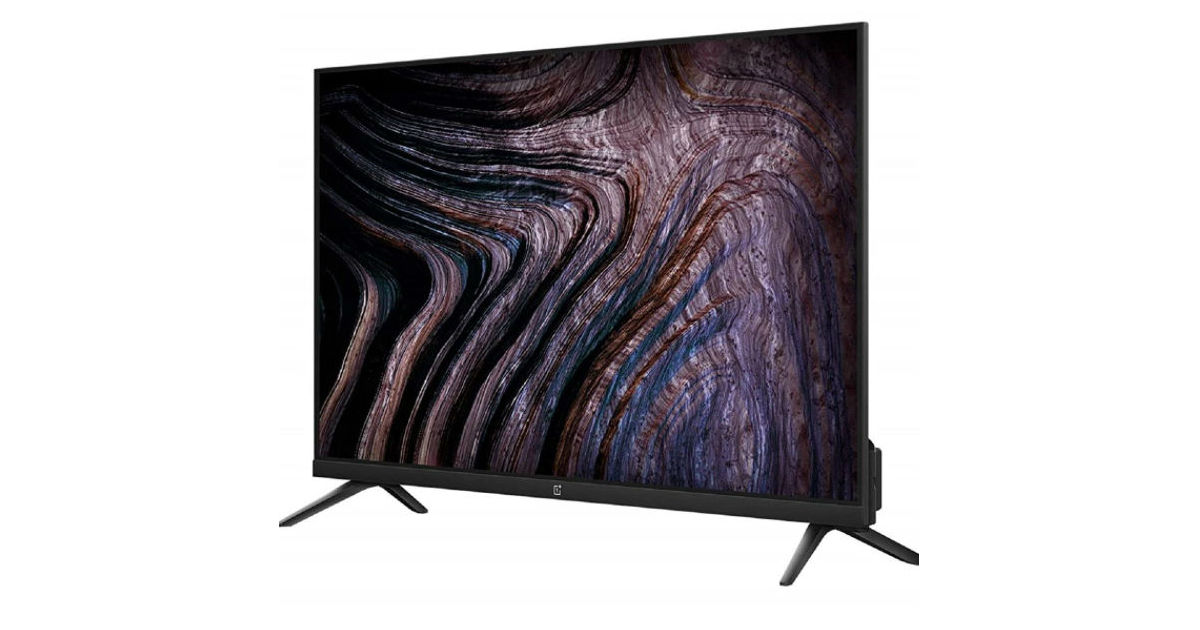