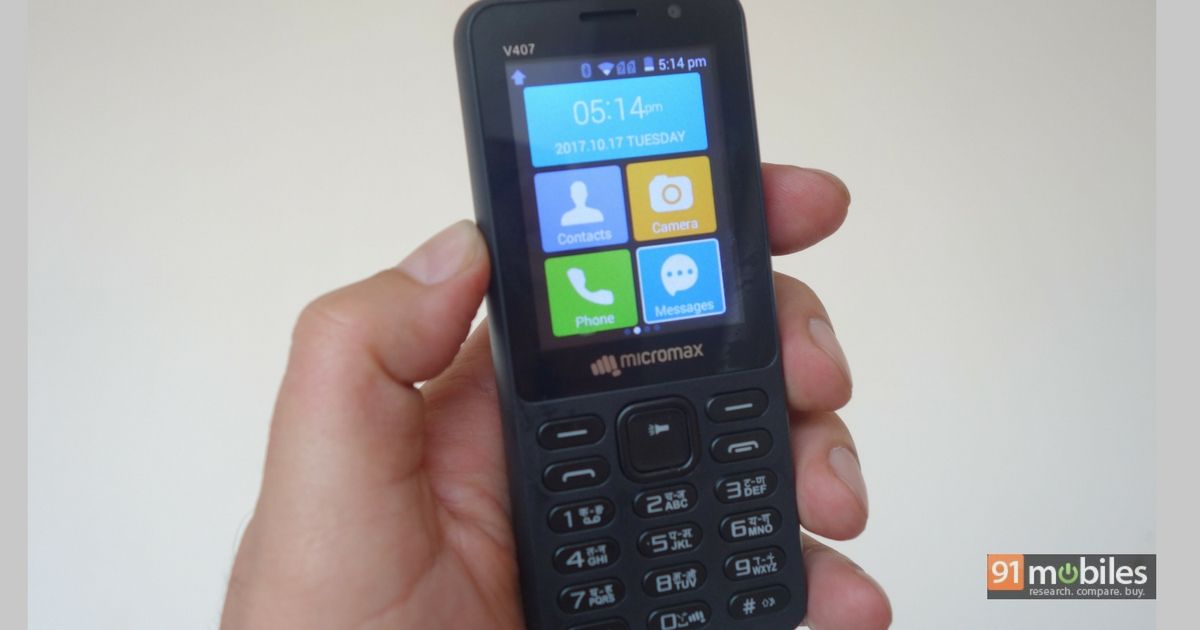 The year 2018 is almost here, and terms like machine learning, artificial intelligence, virtual reality, augmented reality etc are almost part of daily vocabulary for many of us. Driverless cars are roaming the streets in some parts of the world, just as 5G looms on the horizon. Yet, here I am, writing about a feature phone. I thought I’d left these dumb devices behind me, but clearly, a certain Mr Ambani had other plans. With his JioPhone (first impressions), a ‘smart’ feature phone boasting VoLTE and offering media streaming capabilities, Mukesh Ambani is aiming to revolutionise the Indian telecom space yet again, after creating major buzz with his Jio cellular network. The JioPhone may be a special device, but with the launch of the new Micromax Bharat 1 today, I’d say it has very strong competition to contend with. I played with the boldly-named Bharat 1 for a bit today, and this is how it went… 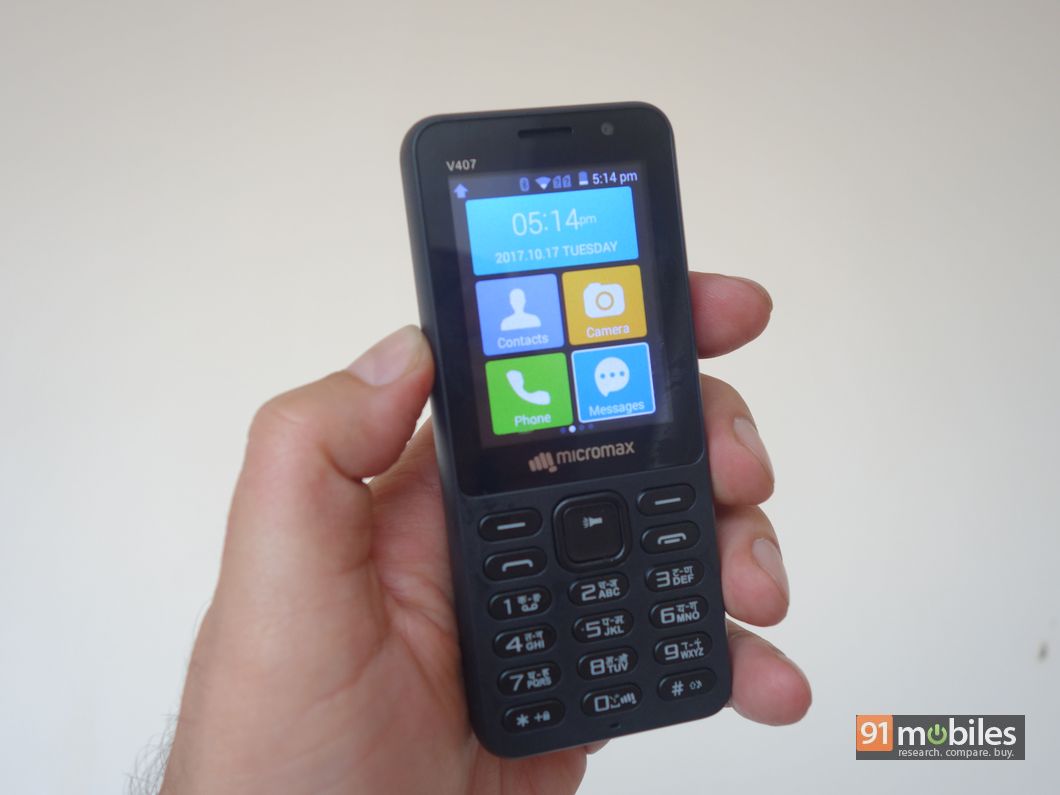 Launched in partnership with the state-owned operator BSNL, the Bharat 1 comes packed in a small box, with the outer sleeve bearing an image of the phone on top and keys specs on the back. Once you get the sleeve off, you’ll find the box itself, and get to see another image of the device. 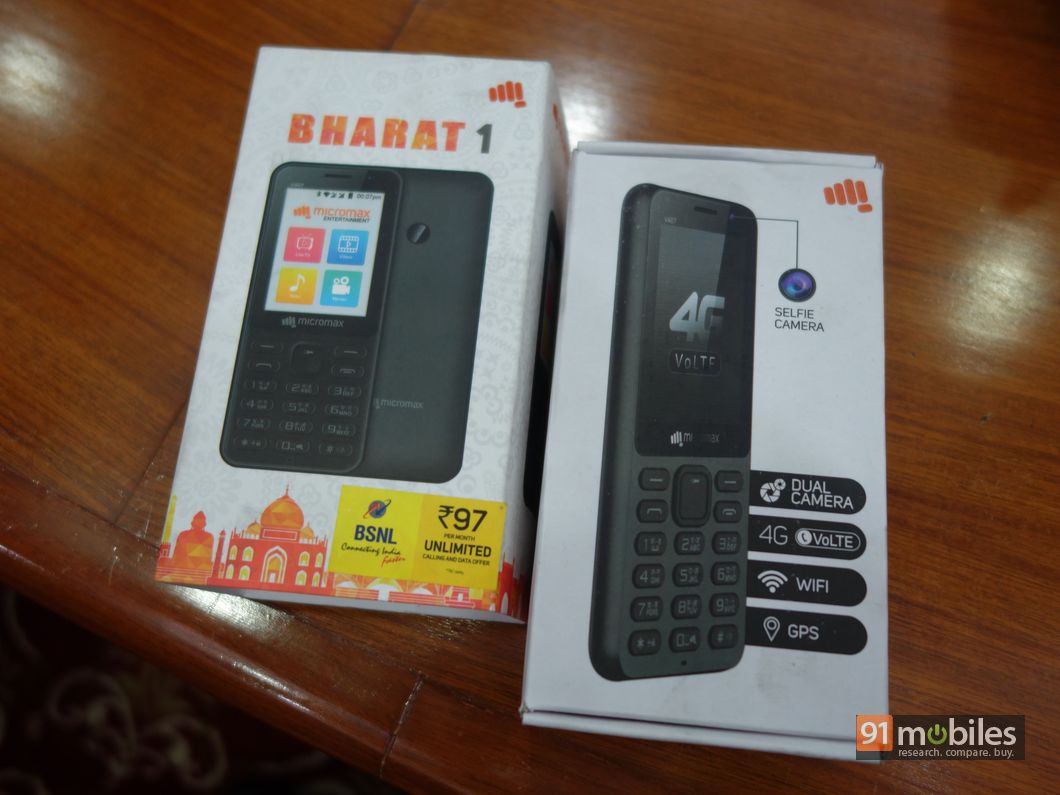 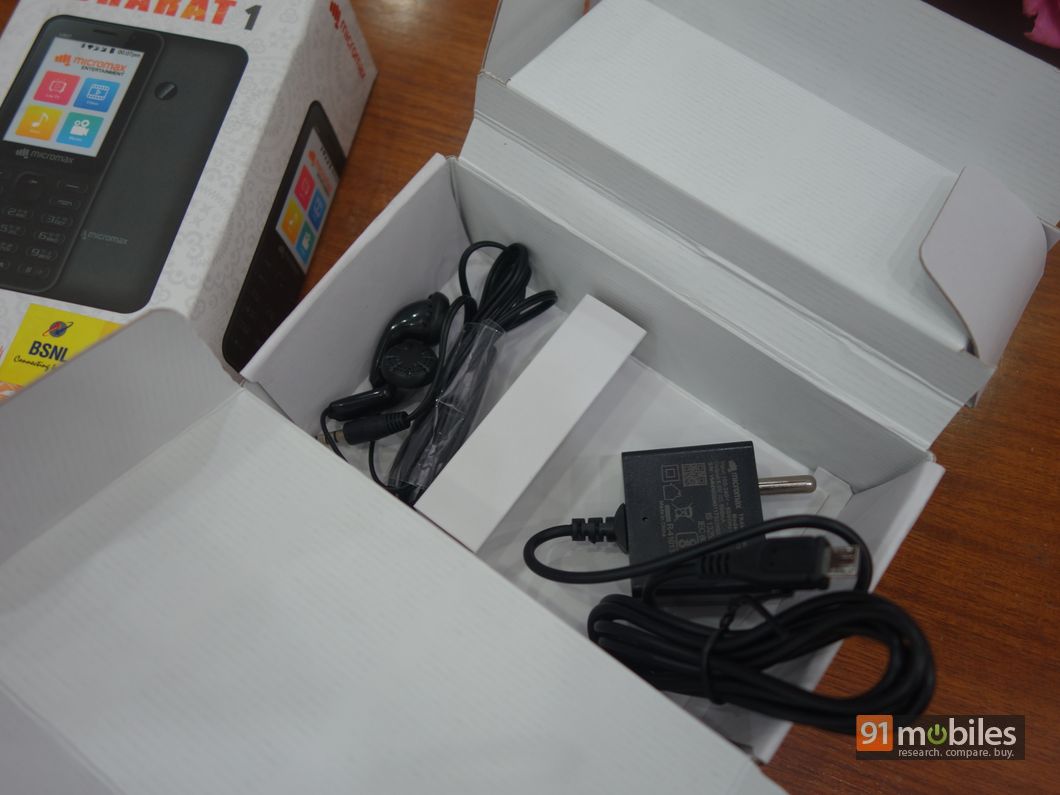 Inside lies the Bharat 1 phone, the 2,000mAh removable battery, a wall adapter with a fixed cable, and a stereo headset. I couldn’t see any documentation, but I’m sure the retail box will include at least a quick start guide and a warranty leaflet or two.

The Bharat 1 looks like every other feature phone and comes clad in a plastic body. It’s thick, but still quite compact overall… and the build seems sturdy enough. The fascia sports the 2.4-inch QVGA screen, Micromax branding, along with the old school standard 12-button keypad. You’ll also find a four-way navigation key with a centre select button, dedicated call and end keys, and a couple of contextual keys that perform the function displayed right above them on the screen. Above the screen, you’ll see the earpiece and the VGA front camera. Let me not call it a selfie camera, as that might be a little too ambitious on my part, but suffice to say… it should be able to handle video calls at least.

At the bottom is a micro-USB port for charging, and a 3.5mm headset socket. Up top, you’ll find a torch. The rear sports the 2MP primary camera, and a Micromax logo. The back panel can be pried open to access the battery, microSD card slot, and a pair of micro-SIM slots.

The core specs of the Bharat 1 are nothing to write home about, and include the Qualcomm 205 platform, 512MB of RAM, and 4GB storage. However, it’s the actual capabilities I’m more interested in, and the device holds a lot of promise in that department.

The Bharat 1 runs a forked version of Android, though you won’t be able to make that out. The colourful, tile-based interface reminded me of Windows Phone, but that’s just me. Since there’s no touchscreen, you can move around the interface using the four-way navigation key and the centre button, and while things weren’t superfast, at least it didn’t seem like walking across sand dunes. 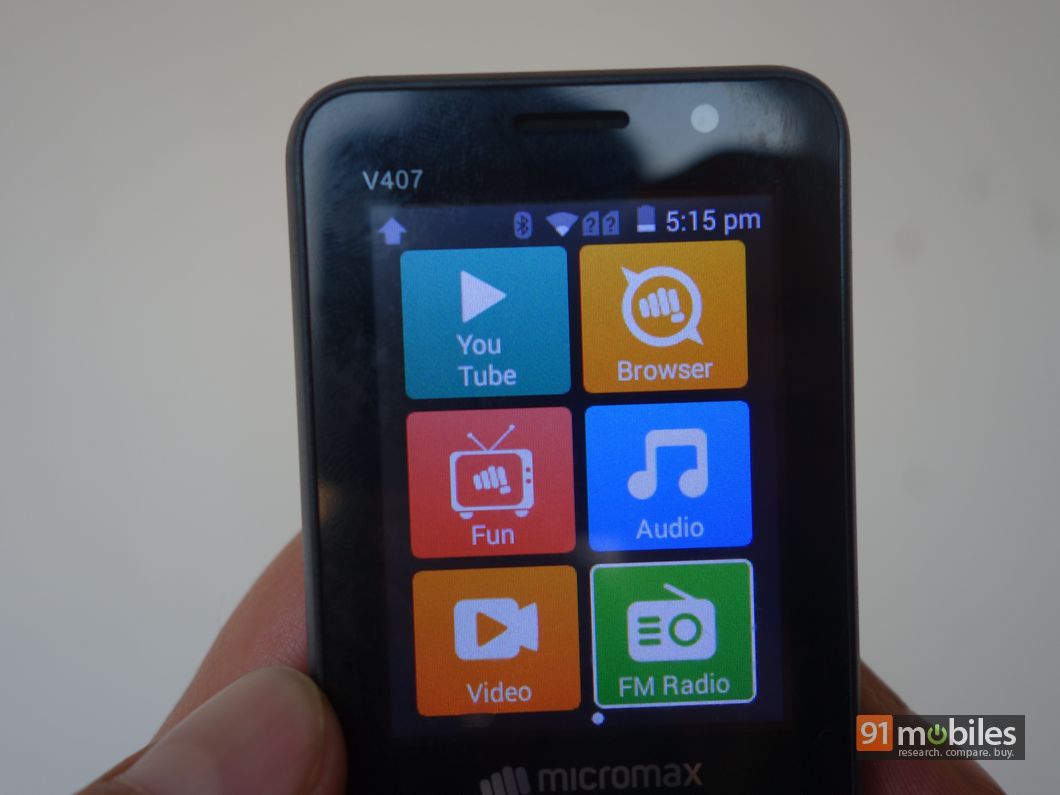 The device allows you to set six of your contacts as favourites for quick access, and apart from the usual stuff like phone, messaging and camera, also comes loaded with apps like YouTube, a browser, audio and video players, and FM radio. There’s an app labelled ‘Fun’, which promises to be exactly that. This seems to be the entertainment hub, and includes live TV, music, movies and videos. I can’t give you an idea of the content library at the moment, but suffice to say that Micromax is leaving no stones unturned to give the JioPhone a hard time. The latter boasts Jio’s bouquet of entertainment services, if you recall. However, the JioPhone can be connected to TVs using a special cable, a functionality which the Bharat 1 misses out on. 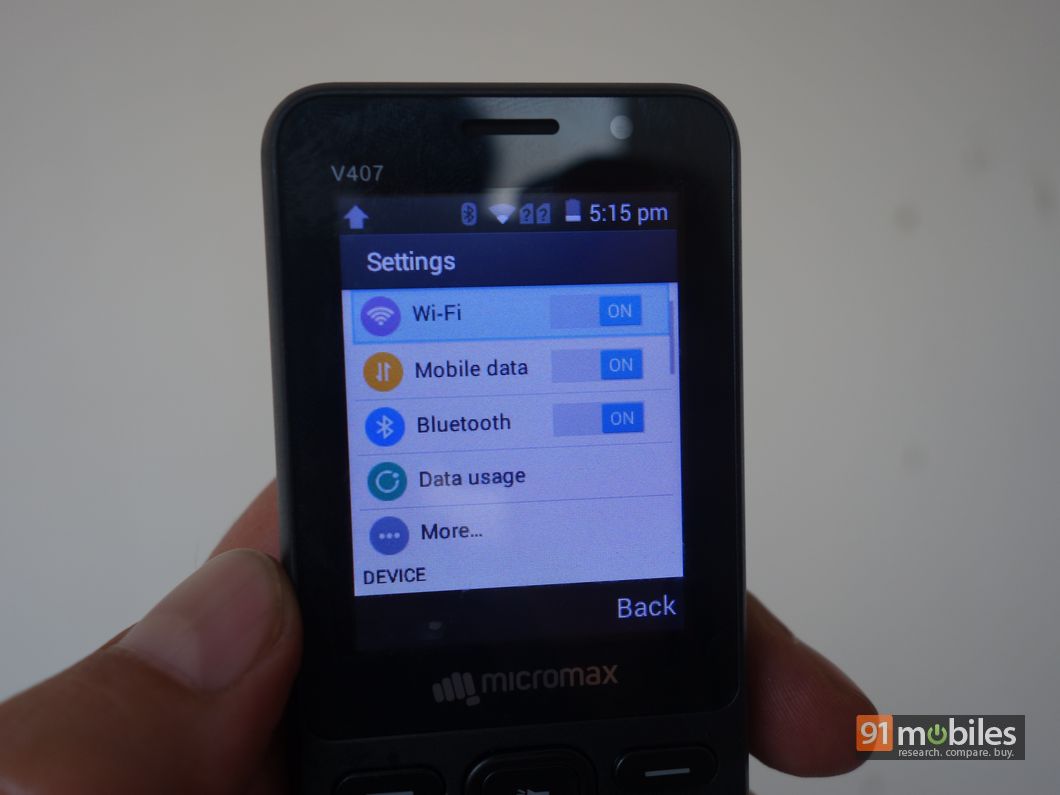 Feature-wise, pun unintended, the Bharat 1 offers 4G VoLTE support, Wi-Fi-, Bluetooth, and GPS. I couldn’t see a mapping application (maybe it’s in the pipeline), but I did see the tethering and hotspot option. Notably, the Wi-Fi hotspot feature isn’t available out-of-the-box on the JioPhone, but can be expected soon. So the Bharat 1 looks quite capable right from the get go, but it’s not as if the JioPhone doesn’t have a few tricks of its own. The JioPhone boasts a voice assistant feature and also NFC for enabling digital payments… features that aren’t there on the Bharat 1. 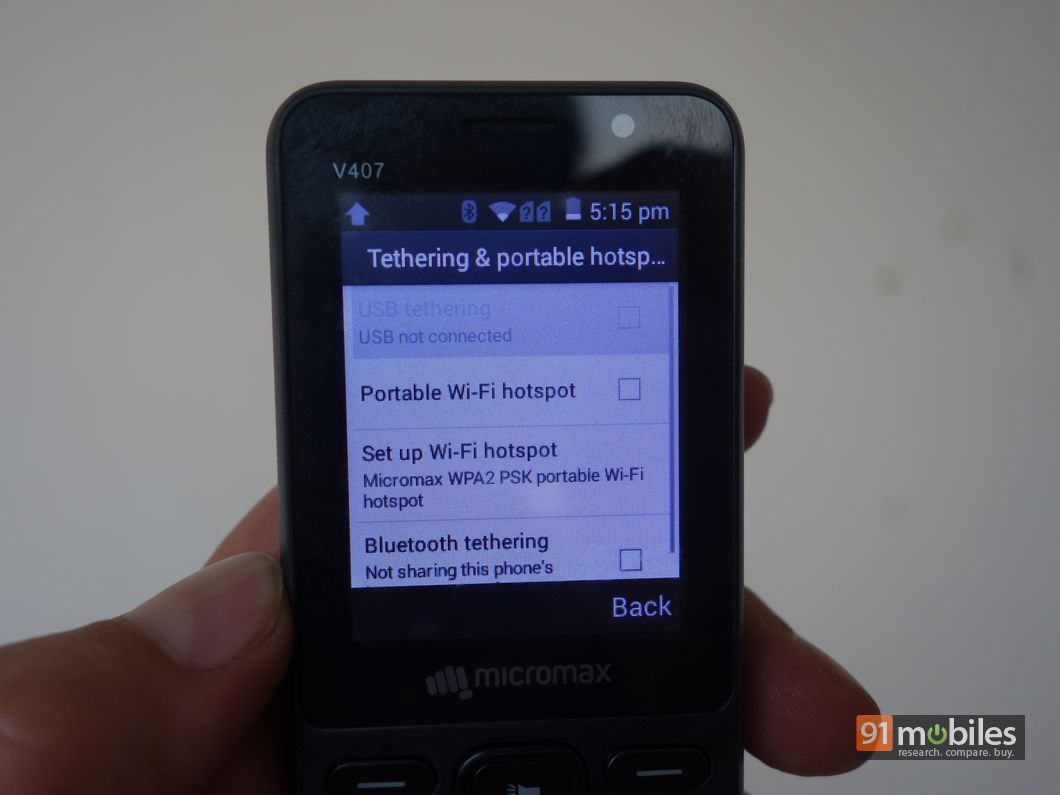 The Bharat 1’s Android-based platform should be a little more flexible than the JioPhone’s KaiOS though, at least on paper. I’m told Micromax has blocked sideloading on the Bharat 1, but apps like BHIM, Facebook and WhatsApp can be expected very soon. 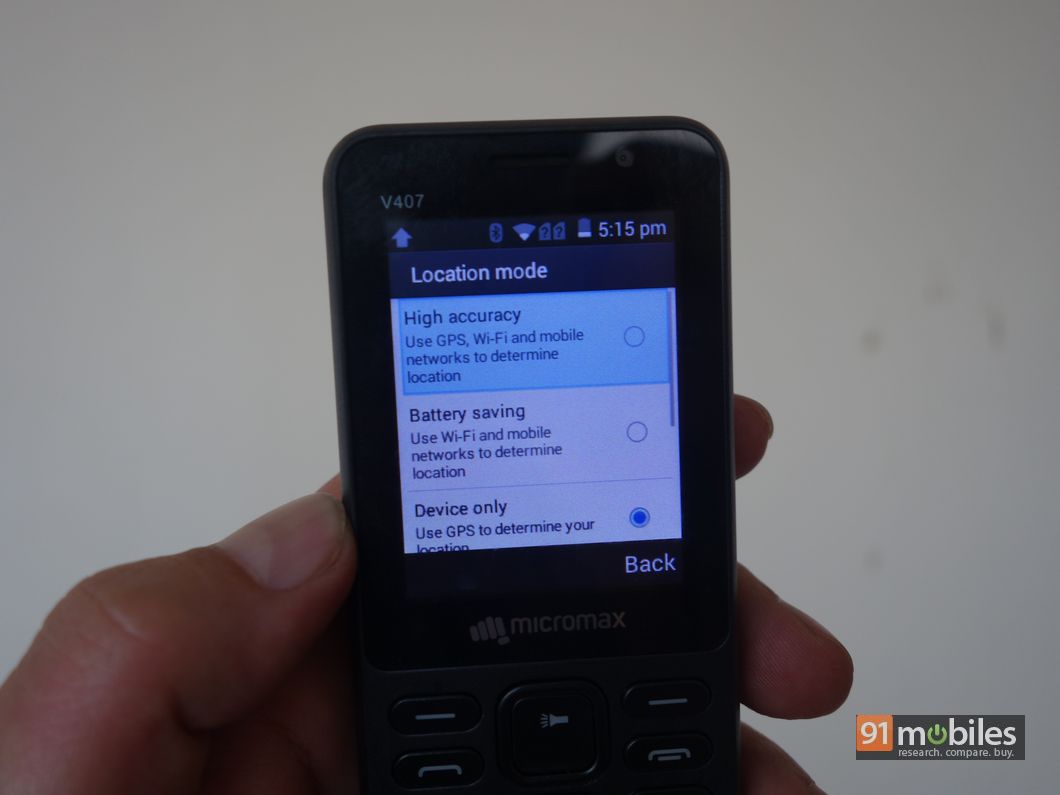 And with an upfront cost of Rs 2,200, without any fine print (at least as far as I can see), the Bharat 1 does seem like a strong competition to the JioPhone. The latter may have been touted as a ‘free’ phone, but by now, we all know about the dictatorial fine print and the fact that the actual cost of ownership over the long term works out to be quite high.

The Bharat 1 should also be more easily available to buy as compared to Reliance’s offering, and you’re free to use the services of any operator with it… just in case the bundled BSNL plan doesn’t look good enough. Heck, you could even use a Jio SIM with the Bharat 1, thereby creating a very patriotic-sounding combination which you can call “Jio Bharat”. Seriously though, the 4G feature phone wars have just begun, so let’s see how things go from here.