91mobiles.com
Home News Micromax In 1b launched at Rs 6,999: should you buy it over...
Highlights 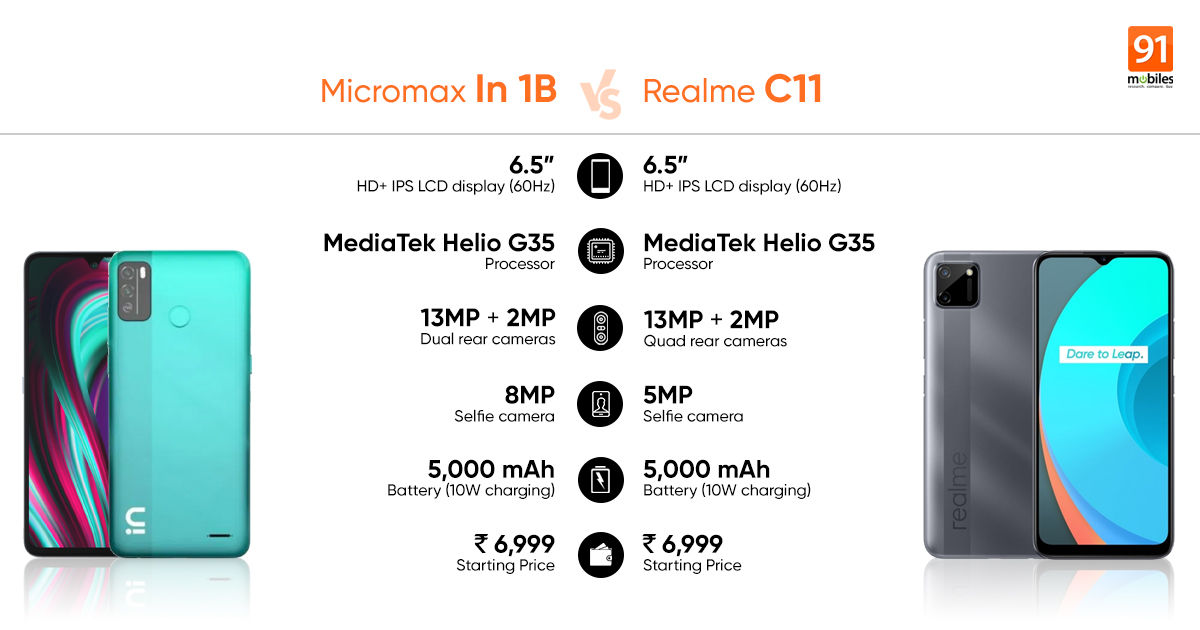 Micromax In 1b price in India was announced alongside the In Note 1 earlier this week. While the In Note 1 is an affordable Rs 10,000 device that competes against the likes of the Redmi Note 9, the In 1b is an entry-level phone that takes on phones like the Realme C11. Incidentally, Micromax In 1b specifications are similar to the Realme C11 (review), the latter being announced back in June. Both phones ship with the MediaTek Helio G35 SoC, dual rear cameras, a 5,000mAh battery, and an HD+ display. The Realme C11 and Micromax In 1a prices in India are also similar. Here’s a closer look at how the two phones compare.

Read now: Micromax In Note 1 launched in India: is it better than Redmi Note 9?

Micromax In 1b vs Realme C11: price in India

Micromax In 1b price in India starts at Rs 6,999 for the base 2GB RAM option in India. The phone also comes in a 4GB RAM option, which is priced at Rs 7,999. The phone will be available on sale from November 26th onwards via Flipkart and Micromax website in three distinct colour options.

The Realme C11 price in India is set at Rs 6,999 and it comes in a single 2GB RAM option. The smartphone is available in India via Flipkart and Realme’s e-store in Rich Green and Rich Grey colours.

Micromax In 1b vs Realme C11: similarities

Micromax In 1b and Realme C11 specifications include a 6.5-inch LCD screen that bears an HD+ (720p) resolution and a waterdrop notch atop to accommodate the selfie camera. The phones are powered by the MediaTek Helio G35 SoC coupled with Mali-G52 GPU. They also support Dual SIM 4G LTE support, Wi-Fi, Bluetooth, GPS/ A-GPS, a 3.5mm headphone jack, and other standard connectivity options.

Around the back, Micromax In 1b and Realme C11 both house dual camera setup comprising a 13MP primary sensor and a 2MP secondary sensor with LED flash. The pack a 5,000mAh battery with 10W charging support. The handsets also have microSD card support to expand the storage.

Micromax In 1b vs Realme C11: Differences

The Micromax In 1b runs stock-Android 10 out of the box, which is upgradable to Android 11. The smartphone also packs a Type-C port for charging, a rear-mounted fingerprint scanner, and a rectangular camera module at the back. The Realme C11, on the other hand, has a squarish camera module at the back and a micro-USB port for charging. The Realme phone runs Android 10 with a layer of Realme UI on top, so you won’t be getting a stock experience. But Realme UI comes with its own set of benefits as well such as improved customisation, dark theme, Game Space, and so on. That said, Realme C11 doesn’t have a fingerprint scanner for security.

These were all the notable similarities and differences between the Realme C11 and Micromax In 1b. Let us know in the comments section which smartphone offers better value, according to you.