91mobiles.com
Home Comparisons Micromax In 2c vs Infinix Hot 11 vs Redmi 10A: performance and... 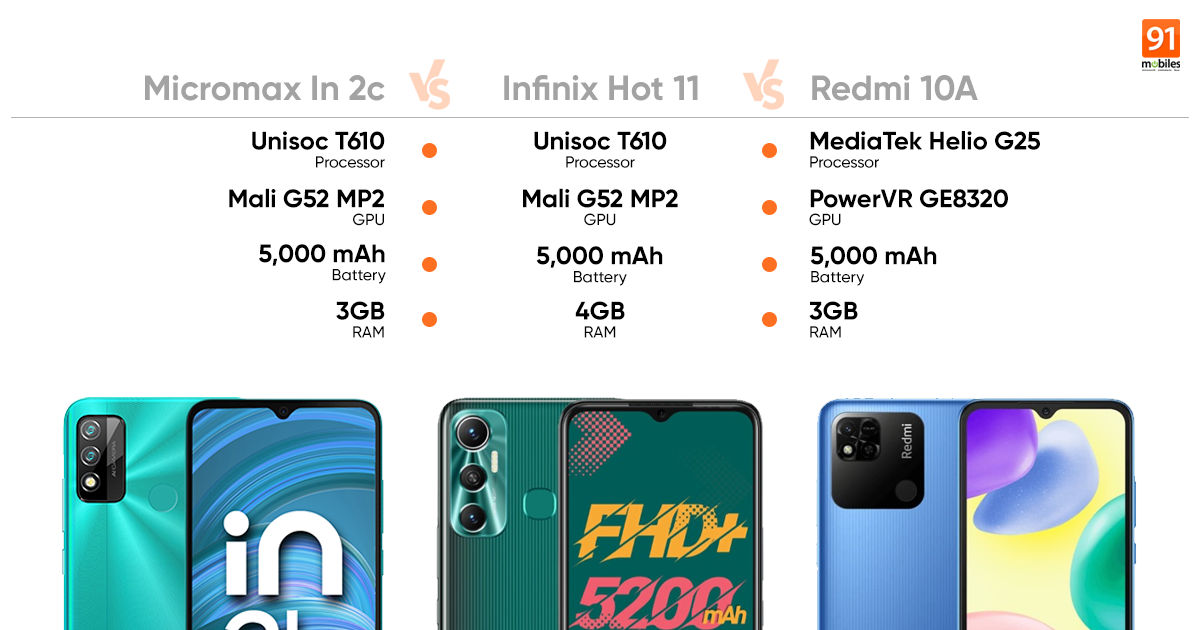 The Micromax In 2c is the latest smartphone from the Indian OEMs stable of products and it is priced quite competitively at Rs 8,499. The budget smartphone segment in India has always seen cutthroat competition and it will be interesting to see how Micromax’s new offering compares against products from Xiaomi and Infinix. In this comparison, I have put the In 2c through its paces in terms of gaming and synthetic benchmarks against the similarly-priced Redmi 10A and Infinix Hot 11. Here’s what I found out.

In terms of the SoC, the Micromax In 2c has the Unisoc T610 chipset running underneath the hood. Apart from that it also comes with 3GB of RAM and 32GB of internal storage. As far as the Redmi 10A is concerned, MediaTek’s Helio G25 provides the processing capabilities, while the RAM and storage options are the same as the In 2c. Finally, there is the Infinix Hot 11 which also utilises Unisoc’s T610 SoC, but features a higher 4GB of RAM combined with 64GB of internal storage. I don’t think it’ll come as too much of a shock to see rather low Geekbench 5 scores from all three devices, and considering their price that’s understandable. On the In 2c, single-core and multi-core results are 344 and 1,081 respectively while the same for the Infinix Hot 11 are 342 and 1,198. The Redmi 10A scores lower on the benchmark with single-core and multi-core results of 136 and 495. From the results, it can be gathered that both the In 2c and Hot 11 are roughly on an equal footing with the extra RAM on the latter not making any difference. The Redmi 10A has a lot of catching up to do with its multi-core score only about 30 percent higher than the single-core score of the In 2c.

Both the In 2c and Hot 11 have the same Mali G52 MP2 GPU while the Redmi 10A has a PowerVR GE8320 handling graphical needs. On Antutu, the benchmark takes into account a variety of factors, including the GPU, RAM, and UI, to compute an overall score. The Micromax In 2c has a score of 184,883 while for the Redmi 10A and Hot 11, the results are 103,742 and 190,581 respectively. Again there is not a lot to separate the 2c from the Hot 11 with the latter taking a small but insignificant lead. However, the Redmi 10A’s score is nearly half that of both the devices, which could be a cause for concern.

None of the three phones can offer an optimum BGMI experience and users looking to enjoy the game will surely set their eyes on more premium devices. In any case, my basis for judging a phone’s graphical capabilities rests mostly on what settings are allowed to run on BGMI. For the Micromax In 2c, the device can run HD graphics at High (30fps) frame rate option and it is the same story for the Infinix Hot 11. On the Redmi 10A however, the game only has Balanced graphics on Medium (24fps) frame rate option. Clearly, among the three devices, the Redmi has a lot of catching up to do and potential gamers with a budget of under Rs 10,000 should take notice.

Battery drain while gaming is also something that can be checked on smartphones. The Redmi 10A, Micromax In 2c, and Infinix Hot 11 all come with the same battery capacity, ie 5,000mAh. However, since the 10A can only run on lower graphics and frame rate options than the other two, it does have a slight upper hand in terms of battery drain. For a 30-minute run of BGMI on the three smartphones, both the Micromax In 2c and Infinix Hot 11 drop 5 percent battery while the Redmi 10A drops 3 percent.

From this comparison, it is clear that the Redmi 10A has a lot of ground to cover as far as processing prowess is concerned. On the other hand, the Micromax In 2c is a device worthy of consideration in the sub-Rs 10,000 segment, and runs hand in hand with the Infinix Hot 11.