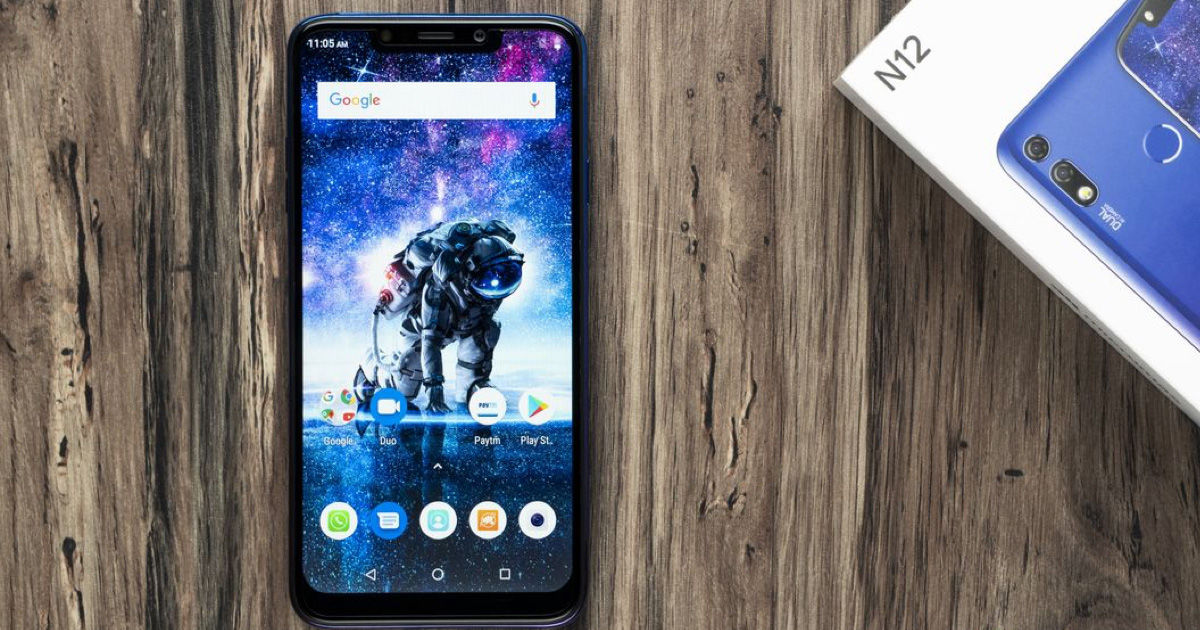 Back in the day, buyers looking for a budget Android smartphone could simply head over to a Spice Mobile store and choose from a plethora of offerings from Micromax. However, over the years, the brand has lost its charm owing to the influx of Chinese smartphone manufacturers in India. In a bid to reclaim its share, the company recently announced the new Infinity N series of smartphones. The first two handsets in the range are N11 and N12, with the latter being a higher-end model. Going by the specs of the N12, it’s clear that the smartphone will lock horns with Xiaomi’s Redmi 6 (review). While it’s too early to tell which of the two devices will come out on top, read on to know whether Micromax’s offering made a lasting first impression on us or not. 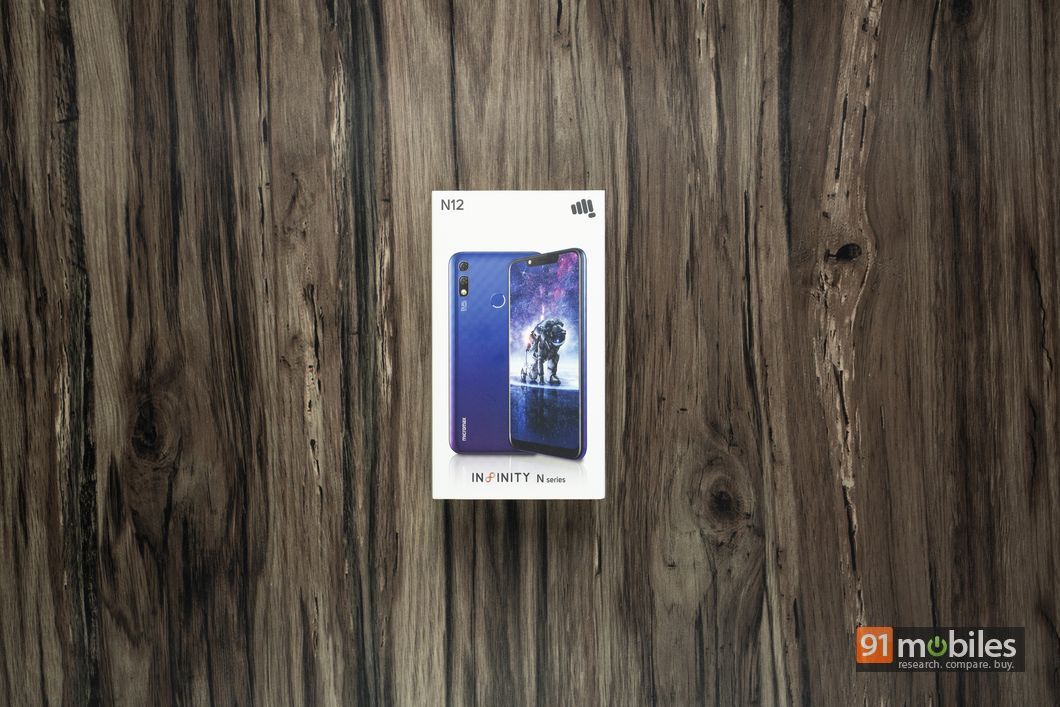 The Micromax Infinity N12 comes packaged in a white cardboard box, upon opening which, buyers will find the phone itself followed by some documentation regarding the warranty, a SIM ejector tool, a power brick and a micro-USB charging cable. The company even bundles a pair of earphones with the device, which is a nice touch. 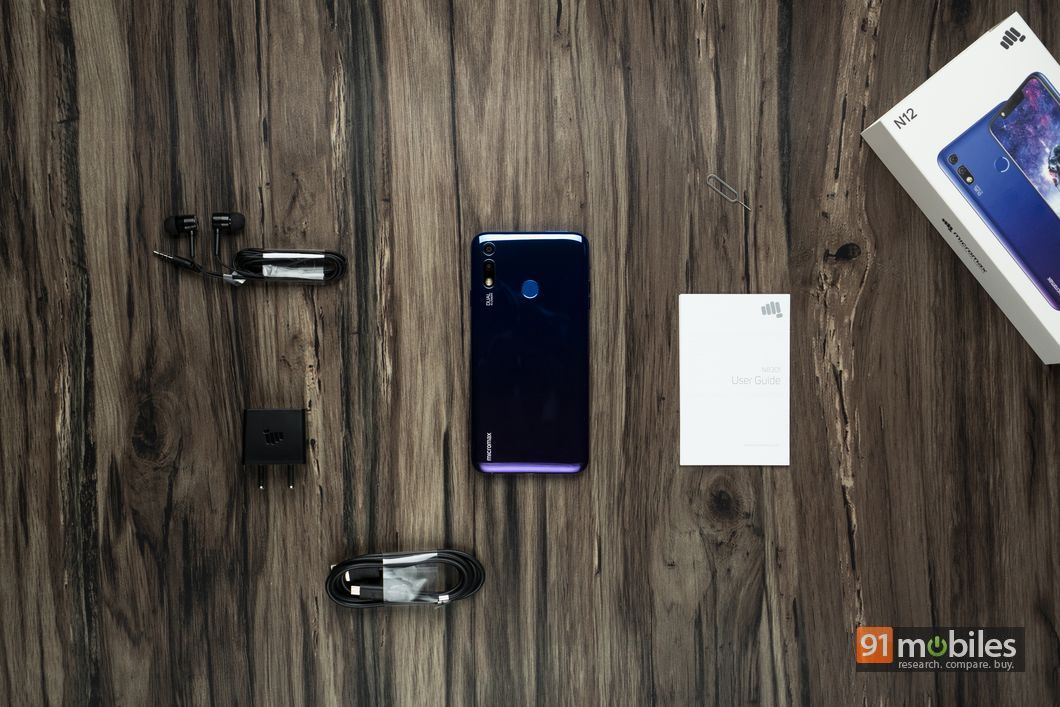 Design-wise, Micromax has taken a page from OPPO’s books and has styled its N12 smartphone in a gradient finish. Unfortunately, since the handset makes use of a plastic back, the coating doesn’t shimmer when the light falls on it. That said, you’ll surely catch glances from onlookers as the Infinity N12 still looks gorgeous from a distance. From the subtle curves towards the back to the precise cuts and incisions made for the camera module and the speaker grill, the phone has clearly been crafted with the utmost care to the design. 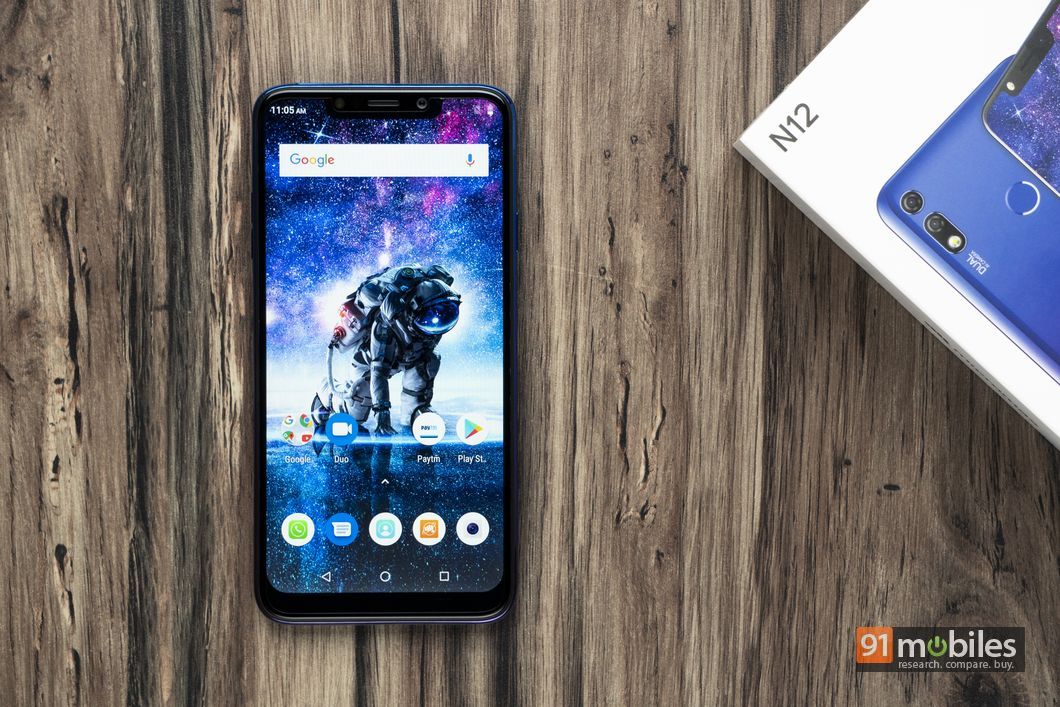 In terms of ports and buttons, the handset ships with a micro-USB socket at the bottom. The charging port is flanked on either side with a headphone jack and a speaker grill. The volume rocker and the power button have been positioned towards the left and right edges of the device, respectively. Flip to the back, and you’ll find a fingerprint sensor positioned below the handset’s camera module. 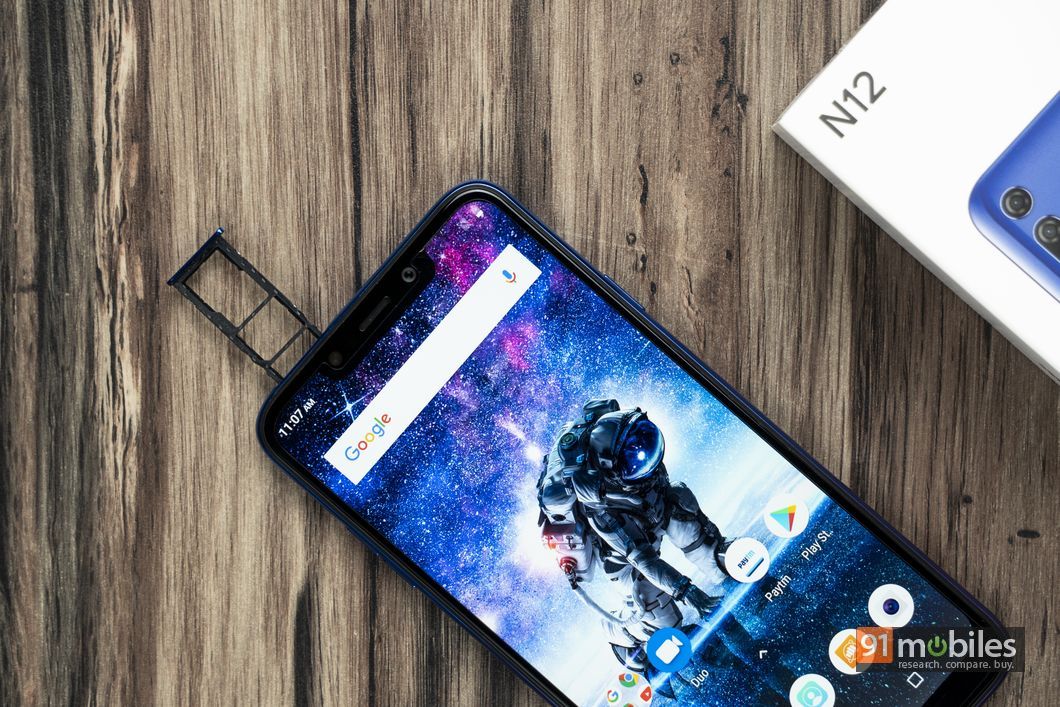 Coming to the display, the Micromax Infinity N12 sports a 6.18-inch IPS panel with an HD+ resolution. Consequently, while the display isn’t the sharpest, it’s massive size paves way for the excellent viewing experience. Moreover, since the display ships with a notch and relatively sleek bezels, the N12 is somewhat manageable to operate with just one hand. The peak brightness levels of the panel were satisfactory too, and I didn’t notice any weird colour shifts while tilting the display. 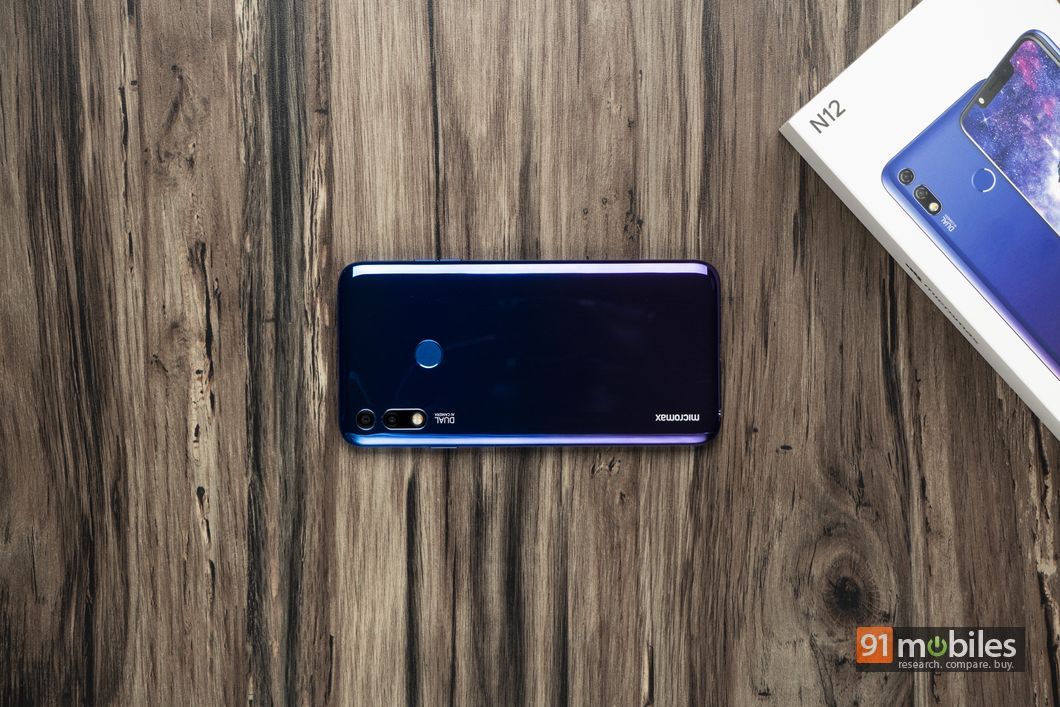 Underneath its plastic chassis, the Micromax Infinity N12 is backed by an octa-core Helio P22 processor clocked at 2GHz. The handset works alongside 3GB of RAM and 32GB of built-in, user-expandable memory. MediaTek has proven its mettle with its latest range of Helio processors and as a result, the P22-toting Infinity N12 should perform admirably too. While I couldn’t run intensive games on the smartphone to test its calibre, the handset opened pre-loaded apps in a jiffy and the UI animations felt quite smooth too. 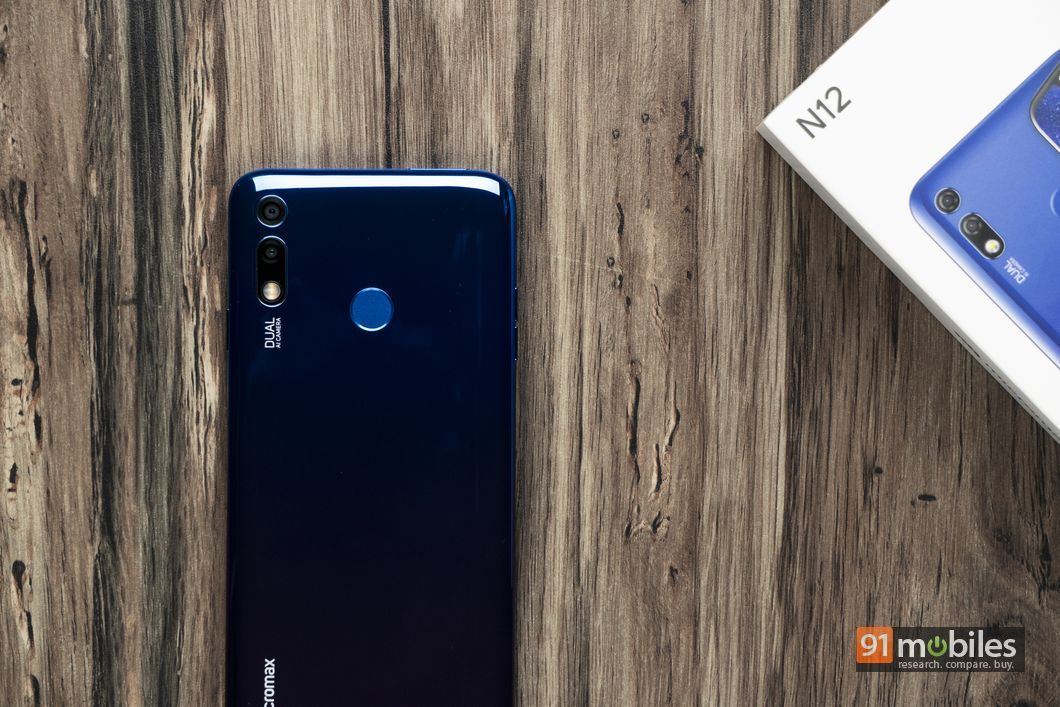 In the optics department, the Micromax Infinity N12 sports a pair of 13MP and 5MP sensors towards the back along with a 16MP selfie-shooter upfront. While it’s too early to give a definitive verdict on the smartphone’s camera prowess, the initial shots I took with the handset seemed promising. 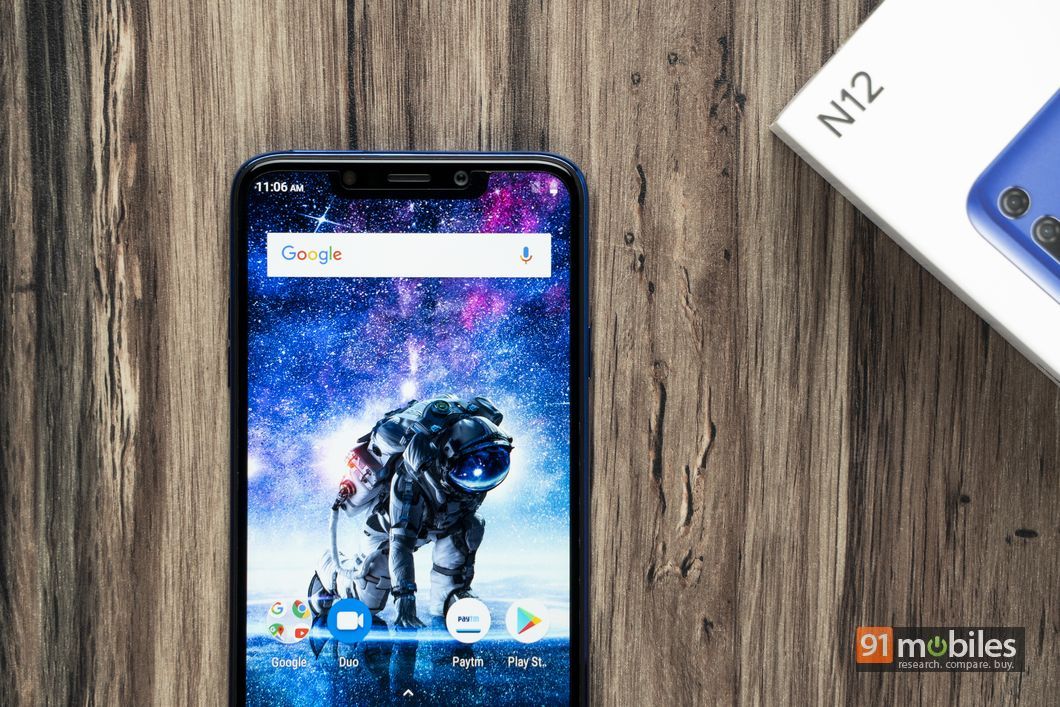 For software, the Micromax Infinity N12 runs a near-stock version of Android Oreo. While the operating system is a bit dated, prospective buyers will be glad to know that the handset ships with the latest security patch from Google. The handset is backed by a beefy 4,000mAh battery which should last at least a day on moderate usage.

It goes without saying that Xiaomi has taken a huge chunk out of Micromax’s market share. Perhaps that’s why the Infinity N12 is aimed squarely at the Chinese brand’s popular budget offering — the Redmi 6. Now both devices go toe-to-toe and while Xiaomi’s handset is priced slightly lesser, what gives the latest phone from the indigenous phonemaker an edge is the fact that it’ll available to buy offline.

Huawei partners with Micromax to boost offline sales in India

Micromax Infinity N12 review: catching up with the trend