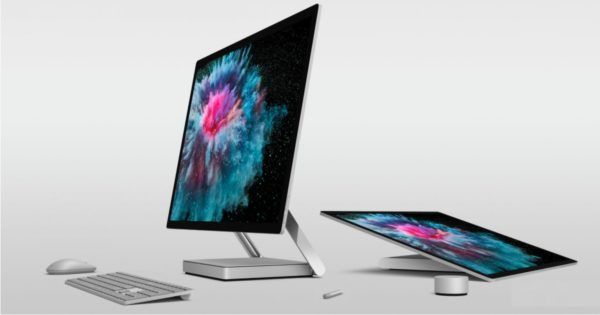 Microsoft has just taken curtains off a handful of new products. Alongside the Surface Pro 6 and Surface Laptop 2, the Redmond giant also unleashed the second-gen model of the company’s first-ever all-in-one Surface Studio computer. The Microsoft Surface Studio 2 sports a new screen and promises enhanced performance. The latest Surface AIO is being claimed to flaunt 50 percent more graphics performance than its predecessor. The device comes with the new Surface Pen featuring tilt sensibility and 4,096 levels of pressure. The Microsoft Surface Studio 2 AIO can be tilted on its stand, which allows smooth experience for productivity and creativity. In this mode, you can draw and sketch on the screen. The device sports the same 28-inch screen as its predecessor, but the display is 38 percent brighter and has 22 percent more contrast. Thanks to the 7th-gen Intel Core i7 processor, the all-in-one computer is 50 percent faster. For graphics, the Surface Studio 2 comes with up to NVIDIA GTX 1070 8GB GDDR5 GPU.

Moving on to the other specs, the Microsoft Surface Studio 2 can be configured with 16GB or 32GB of DDR4 RAM and 1TB or 2TB of SSD storage. There’s a 5-megapixel front-facing camera on board with support for full HD video recording. The AIO has four USB 3.0 ports, a full-size SD card reader, one USB Type-C port, Wi-Fi, Bluetooth 4.0, Xbox wireless built-in, and a 1Gigabit Ethernet port.

As for the pricing, the Surface Studio 2’s base variant has been priced at $3,499, while its high-end version will set you back by $4,799. The AIO is available to pre-order in the US and will go on sale from November 15th.

Microsoft Office to be renamed in biggest brand overhaul in 30 years: here’s the new name