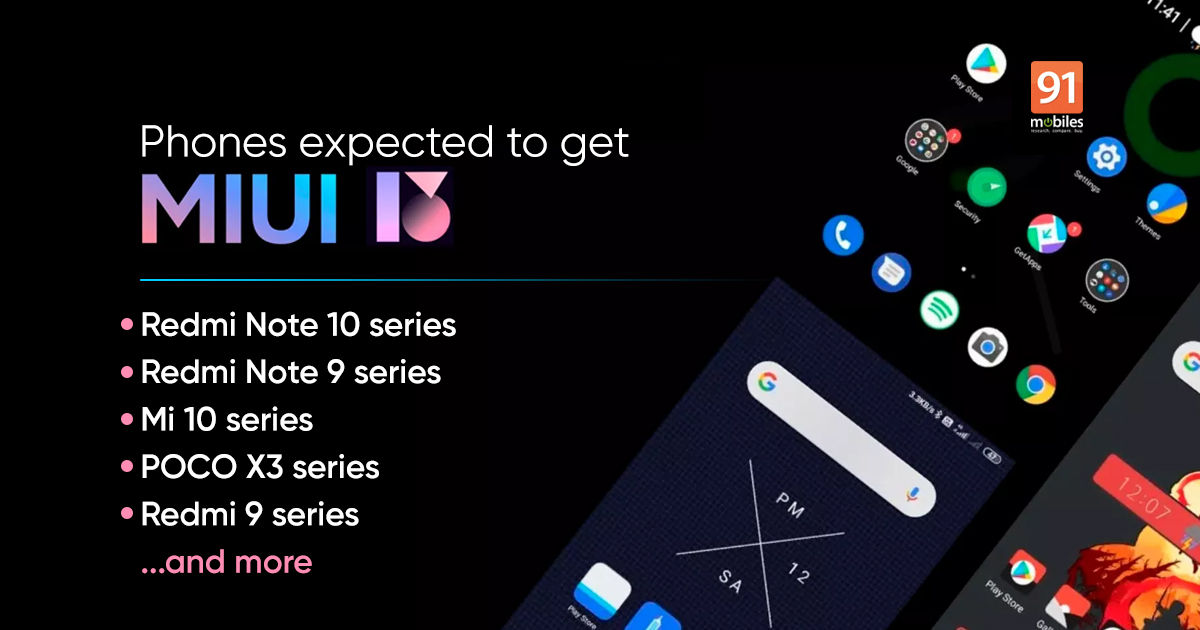 MIUI 13 release date seems to be just around the corner as reports around its features, update, and eligible devices have started doing the rounds. The upcoming custom Android skin is expected to bring some significant improvement over last year’s MIUI 12.5. The MIUI 13 update launch is likely to happen as early as next month and just like every version in the past few years, it’s expected to arrive on Xiaomi phones, including Redmi and POCO, from 2019 or newer. Speaking of the MIUI 13 features, it’s supposed to bring optimised animations, new themes, wallpapers, and plenty of security improvements, among other things. Here’s a quick look at MIUI 13 update, features, device list, and everything we know so far!

Xiaomi is mum on MIUI 13 release date in India and elsewhere. However, rumours are rife, that the custom Android skin could be announced sometime in August. The update is likely to be announced in China first, followed by other regions. Looking at Xiaomi’s past track record, if the MIUI 13 is announced next month, the update could take around 2-3 months to reach India. MIUI 12, to recall, was originally announced in May last year but was only made available in the country in August.

As usual, the MIUI 13 update download will be in a phased manner. The brand will roll out the beta version of the update to a handful of users at first, followed by the stable version for all compatible devices. The timeline of the MIUI 13 update rollout remains a mystery at the moment.

MIUI 13 is said to have multiple new features. It’s said to come with a floating window for games, which is totally new on any custom skin as we’ve so far seen only floating windows for apps. The MIUI 13 could also bring memory fusion technology and a layered rendering system. The former is said to be similar to the virtual RAM feature seen in OPPO and Vivo smartphones. The feature allows phones with limited RAM to utilise a portion of the storage as RAM for better performance and multitasking. The MIUI 13 is expected to bring an additional 3GB of RAM to Xiaomi phones.

Additionally, the skin will reportedly be a significant change over the MIUI 12 in terms of design and look. The update is also said to bring new animations and fonts, redesigned app icons, advanced privacy options, native screen recording support, improved battery performance, new gestures, and an enhanced notifications panel, among other things.

Expect Xiaomi to throw in some new Super Wallpapers (its version of Live Wallpapers) in the upcoming MIUI 13. Additionally, there could be some new ‘Live Backgrounds and Themes’, inspired by last year’s MIUI 12 whose Mars theme with moving pictures of the red planet were well-received among the users.

The MIUI 13 update is said to be released for Xiaomi devices launched in the previous two years. This is is not surprising as the vendor is known for providing three MIUI updates for flagships as well as popular mid-rangers, and two MIUI update for budget smartphones. The rumoured MIUI 13 eligible device list so far includes:

While Xiaomi will allegedly release the MIUI 13 update to devices launched in the last two years, rumours are rife that it has decided to skip it for its 2019’s flagships Mi 9 and Mi MIX 3, as well as last year’s mid-rangers like the Redmi Note 8 series and the Redmi 8 lineup.