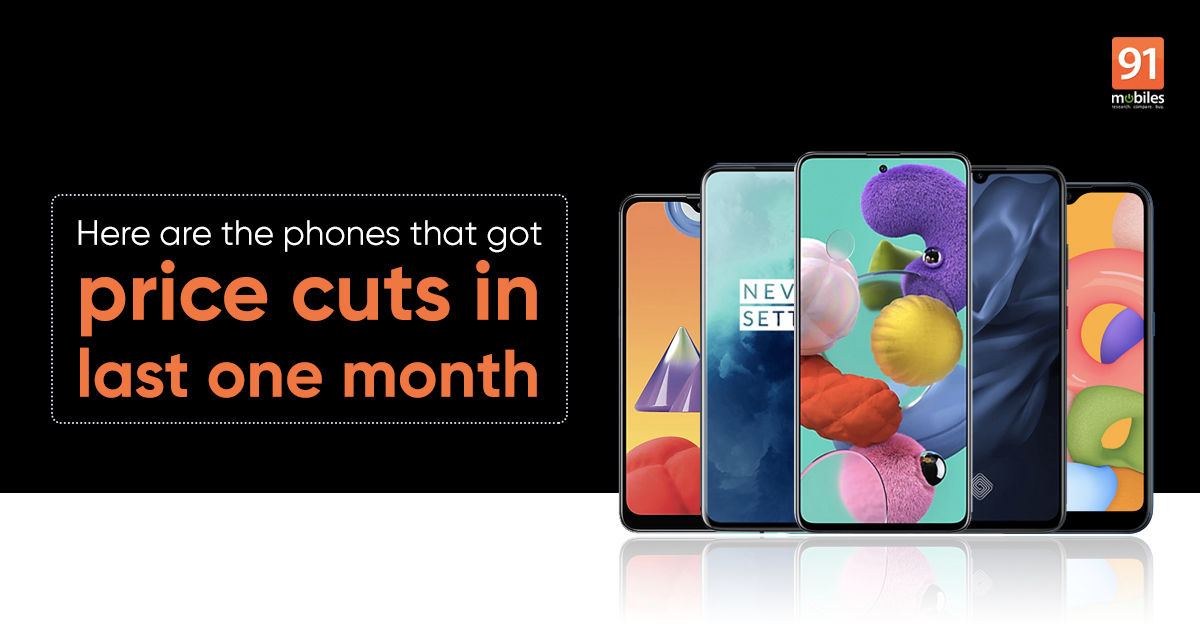 The list of mobile phone price cuts of September 2020 grew a little bit longer this week as Samsung slashed prices of five of its smartphones in one fell swoop. However, these ‘cuts’ were only temporary. Nonetheless, smartphone brands across the spectrum have given permanent price cuts to their smartphones as well this month. So, whether you are interested in Samsung or OnePlus phones, prefer Realme or Vivo, there are phones that received price cuts for almost everyone. Without wasting any more time, here are the 10 mobile phones that received price cuts in India in the last one month.

OnePlus 7T Pro just recently received a permanent price cut in India. The phone’s model with 8GB RAM and 256GB storage is now available at Rs 43,999 instead of its previous selling price of Rs 47,999. Considering that the OnePlus 8 series is slightly more expensive if you were planning on picking up last year’s flagship model from OnePlus, you will now be able to pick it up for Rs 4,000 less, which is definitely a good deal. To recall some of the main specs, the OnePlus 7T Pro comes with a notch-less 6.67-inch QHD+ Fluid AMOLED display with 90Hz refresh rate. The handset is fuelled by the Snapdragon 855 Plus chipset paired with 8GB RAM and 256GB internal storage.

Samsung Galaxy A71 and Galaxy A51

Samsung Galaxy A71 with 8GB RAM and 128GB storage, which was earlier priced at Rs 31,999 in India, is now available at Rs 30,999 in the country. Considering that this has been a popular phone, if it has been on your wishlist for some time, you will now be able to get your hands on it by spending less.

Moving from one popular Galaxy A series phone to another, Samsung Galaxy A51 has received price cuts on two variants: 6GB+128GB and 8GB+128GB. The former, which was earlier available for Rs 25,250, is now selling for Rs 23,999, while the latter can now be purchased for Rs 25,999 in India, down from Rs 27,999. Both phones are now better value by all means.

Samsung budget phones got some decent price cuts in this last month and they’ve now become even more affordable. Starting with the Galaxy M01, the handset’s price has gone down from Rs 8,999 to Rs 8,399. Next, the Galaxy M01s model with 3GB RAM and 32GB storage can now be purchased for Rs 9,499, instead of its previous selling price of Rs 9,999. Finally coming to the Samsung Galaxy M01 Core, the base 1GB+16GB variant of the phone now starts from Rs 4,999, instead of its earlier price tag of Rs 5,499, while the 2GB RAM + 32GB variant of the phone is now retailing for Rs 5,999 instead of Rs 6,499.

Vivo S1 Pro and Y50 received price cuts in September as well. These handsets, which were launched for Rs 19,990 and Rs 17,990, respectively, are now available for Rs 18,990 and Rs 16,990 in the country. If you’re looking for a Vivo handset in the mid-range segment, these two could be really good options now. The key Vivo Y50 specifications include a 5,000mAh battery with 15W charging, punch-hole display with 16MP selfie camera, and 13MP + 8MP + 2MP + 2MP quad-camera setup on the back. On the other hand, the Vivo S1 Pro specifications include a Super AMOLED display, Snapdragon 665 chipset, 48MP + 8MP + 2MP + 2MP quad rear cameras, 32MP selfie sensor, in-display fingerprint sensor, and 4,500mAh battery with 18W fast-charging.