Moto E7 Power India launch has been tipped and it seems the smartphone will arrive soon. Tipster Mukul Sharma tweeted that the Moto E7 Power will launch in India, but he hasn’t provided an exact launch date yet. The tipster has also provided a couple of key Moto E7 Power specifications, including the battery and chipset details. This comes a few days after the smartphone’s design and specs were leaked alongside the Moto G30 in a report by WinFuture. The upcoming Motorola E-series phone is expected to come with an affordable price tag, which should be well under Rs 10,000.

[Exclusive] Motorola is soon going to launch its Motorola Moto E7 Power smartphone in India. Will feature a 5,000mAh battery and a Helio G25 processor (the recent Geekbench listing suggests a P22 chipset, but as per my source, it’ll be G25 only).#Motorola #MotoE7Power

As per the tipster, Moto E7 Power India launch will be soon and the smartphone will feature a 5,000mAh battery and MediaTek Helio G25 chipset. That’s all the information we get from Sharma on the Moto E7 Power launch in India. 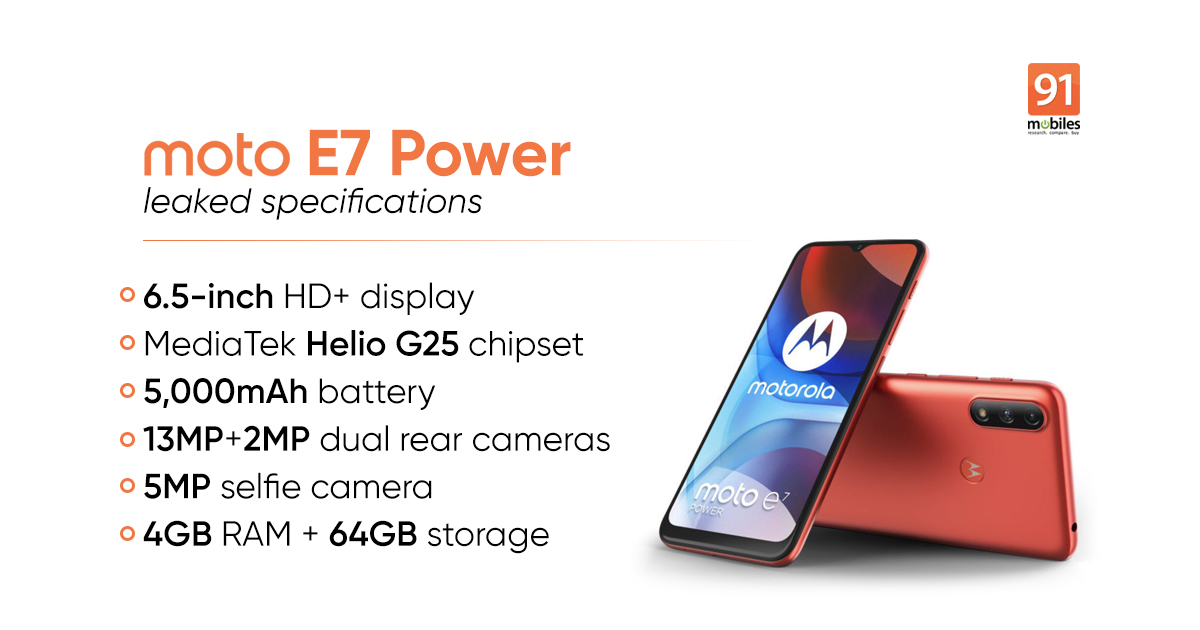 Moto E7 Power specs, as per a report by WinFuture, includes a 6.5-inch HD+ display with a waterdrop notch and a standard 60Hz refresh rate. The report also mentions that the smartphone will be powered by the MediaTek Helio G25 chipset, which will be paired with up to 4GB RAM and 64GB internal storage. In addition to a 5,000mAh battery, the smartphone will run on Android 10 OS. The Moto E7 Power is tipped to come with a 13MP+2MP dual rear camera system and a 5MP front-facing camera.