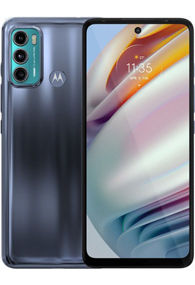 The Moto G40 Fusion is Lenovo-owned Motorola’s latest G series smartphone launched alongside the Moto G60 (review). Aiming to disrupt the affordable segment and compete against brands like Xiaomi and Realme, the G40 Fusion has been priced starting at Rs 13,999. The phone boasts some decent features and respectable specs, including the Qualcomm Snapdragon 732G chipset, a 6,000mAh battery and a 120Hz refresh rate display. Let’s see if the Moto G40 Fusion can go head to head against its rivals. 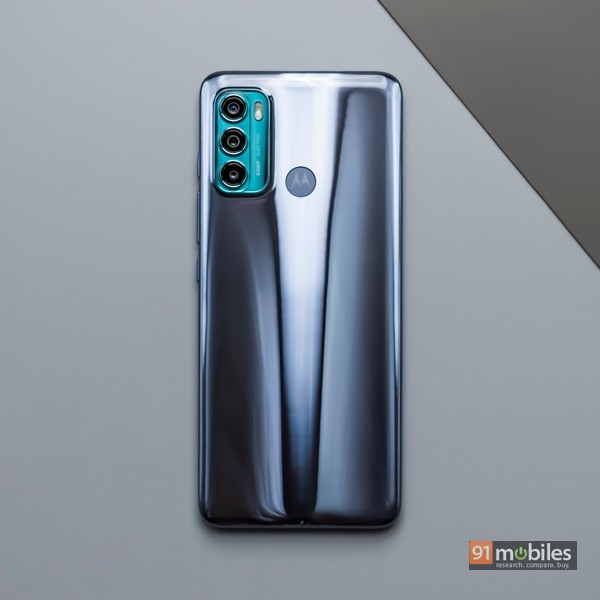 In many aspects, the Moto G40 Fusion is a solid phone. Whether it’s the smooth 120Hz display or its clean software or the smooth performance, you get what you paid for. However, the camera quality is lacking and the phone’s substantial weight makes it a not-so-enticing option. 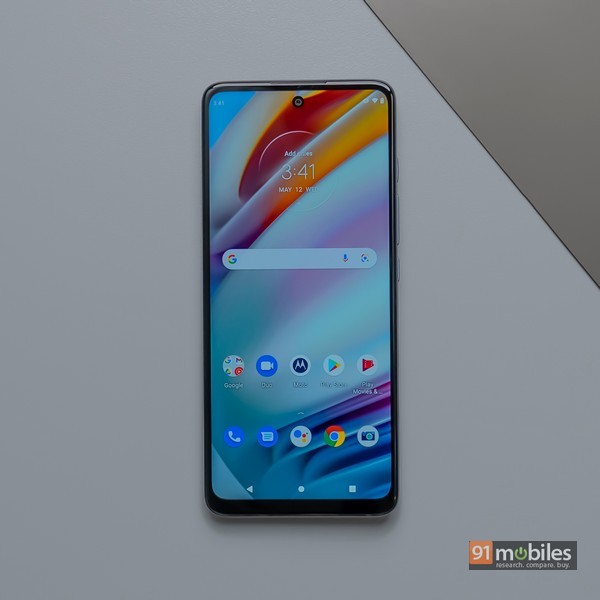 The Moto G40 Fusion is a bulky device with a rather heavy in-hand feel. Except for the 64MP | Quad Pixel inscription on the camera housing, the G40 Fusion is virtually indistinguishable from the G60. The glossy polycarbonate back accentuates the slightly dull Silver colour, while the front of the phone has the same razor-sharp edges. The cameras are arranged vertically and the housing has a different colour than the rest of the back panel. The headphone jack is located at the top, while the bottom is reserved as usual for the USB-C port and speaker grille. The power button retains the textured look which differentiates it from the dedicated Google Assistant button that, for some reason, is present on the same side. Lastly, the hybrid SIM slot is present on the left side of the phone. It’s abundantly clear that the G40 Fusion is not going to appeal to a lot of users from a design perspective. One feature which will definitely attract many prospective buyers is the massive 6.8-inch, 120Hz LCD panel. Again all features on the display are exactly the same as its older sibling and this includes the HDR10 compatibility and WideVine L1 certification. The usual customisation options are available for the screen, such as those that let you adjust the colour profile, set the refresh rate, toggle the Eyecare and Dark Mode, change brightness and more. The display lacks the sweeping deep blacks and superior contrast ratios provided by an AMOLED panel but for its price, the Moto G40 Fusion has a splendid screen. 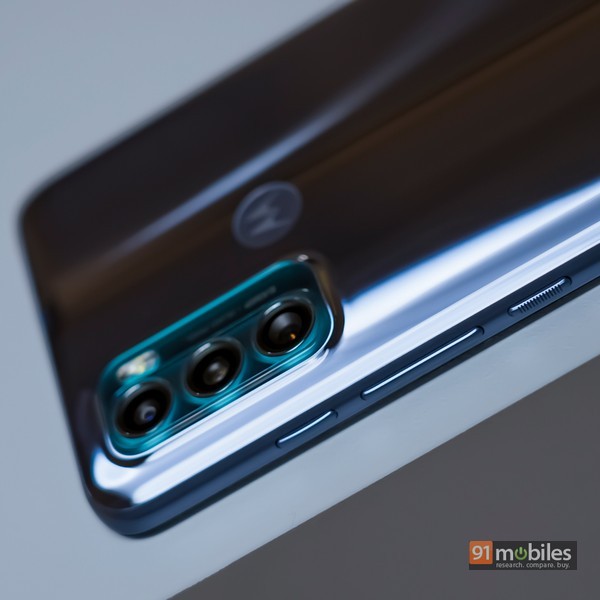 As for the optics, the Moto G40 Fusion packs in a 64MP triple-camera setup with the other two being an 8MP ultra-wide shooter and 2MP depth sensor. The G60 was not very impressive for its price even with its 108MP camera and the G40 isn’t too impressive either. In good daylight conditions and even in overcast weather, the G40’s primary sensor churns out standard shots with decent details and dynamic range but the focus, in general, remains soft. The usual Moto brand of oversharpening is seen quite consistently in the pixel-binned 16MP shots. Colours are mostly realistic and exposure is handled well. The ultra-wide sensor shows some warping at the edges but generally clicks decent pictures. The depth sensor handles its function of separating the background from the subject quite well. Lastly, the macro capabilities work about as well as expected until the lighting drops. Speaking of which, in low-light, the G40 Fusion takes grainy shots with details that get smoothened out to prevent noise. The night mode doesn’t help much. The 16MP selfie camera that takes acceptable selfies. 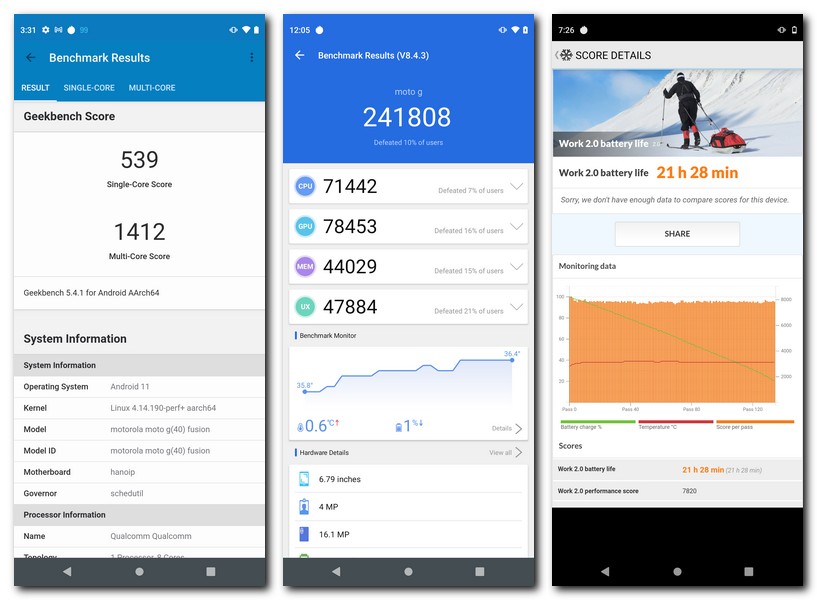 Talking about performance, the G40 Fusion is powered by the Qualcomm Snapdragon 732G, making it the cheapest phone on the market to make use of the chipset as of now. You can expect impressive processing capabilities both on the GPU and CPU side of things. App switching and opening speeds are quite fast and there is no noticeable lag even while browsing through heavy apps. Gaming is mostly fine on the phone when settings are on Medium for GPU-intensive titles. There are 4GB and 6GB RAM variants of the phone, with the latter priced higher at Rs 15,999 and bundled with 128GB storage. Other aspects of the phone such as the fingerprint sensor, speaker volume, earpiece and microphone quality are all up to the mark. A staple of Moto phones has been the MyUX skin which is bloatware-free and light on the processor. The Moto G40 Fusion runs Android 11 currently but you are guaranteed an upgrade to Android 12 at the very least. Finally, there is a massive 6,000mAh battery that contributes to the phone’s bulky design. During my usage of the G40 Fusion, like the G60, I found I could push the phone past the one-day mark easily with normal usage. PCMark’s Battery 2.0 test yielded the same 21 hr 28-minute score as it did for the G60. Also, the 20W charger takes more than 2 hours to charge the phone from 0-100 percent. 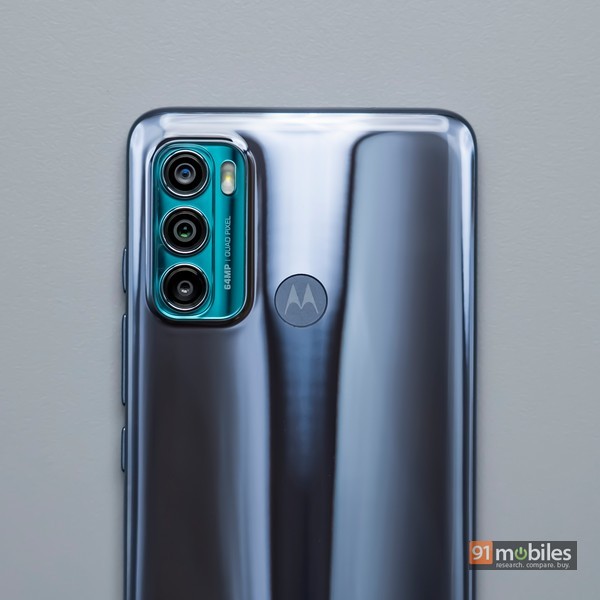 The Moto G40 Fusion is a capable phone and offers some noteworthy features like a 120Hz display and a giant battery. The software is very user friendly and the performance on the phone is very much on par with the competition. The optics are a slight let down and the bulky design is something no user would like in their hands. Also the variant costing Rs 13,990 packs in only 4GB RAM which is a shade lower than what the Redmi Note 10 or the Realme 8 offers in their base variants. Overall I feel that the Moto G40 Fusion does a satisfactory job of making people consider something else other than the usual slew of Xiaomi and Realme phones that are packed in this segment. Buy the G40 Fusion for its capable display, clean software and decent performance. For better optics, the Redmi Note 10S (review) or Realme 8 (review) deserve a closer look. 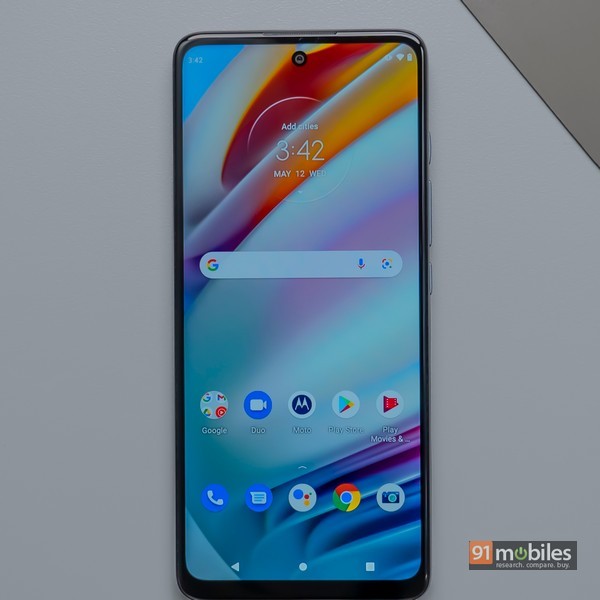