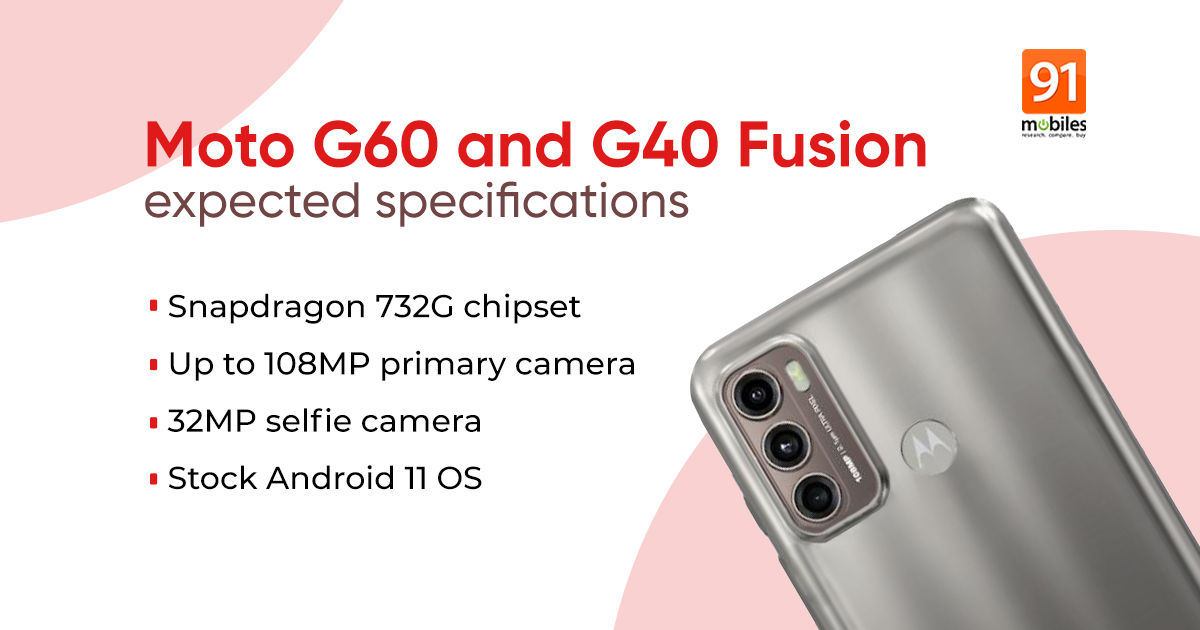 Motorola is set to bring two new Moto devices to the Indian market very soon. As per the leaked details shared by tipster Mukul Sharma, the company could introduce the Moto G60 and Moto G40 Fusion for buyers in the country. As per the tweet, the two models are seemingly confirmed to launch in the Indian market soon. In addition to this, he also mentions that both the phones will come powered by the popular Qualcomm Snapdragon 732G mid-range chipset. Using this SoC means, both the Moto G phones will offer 4G LTE network support.

[Exclusive] Remember the 2 upcoming Motorola smartphones I talked about? I can now confirm that the two devices will be called Moto G60 and the Moto G40 Fusion. Both devices will be powered by the Snapdragon 732G chipset.
More to come
Feel free to retweet#NextMotoG pic.twitter.com/bPGsEr34Qd

Moto has focused on changing its product strategy in the country. After a slew of products was adjudged to be overpriced, the company managed to correct its mistakes with the recent Moto G phones. And it is likely the Moto G60 and Moto G40 Fusion will form part of the transition for the brand. While the tipster keeps the leaked details to a minimum, the same source had earlier tipped that Moto G60 could feature a 108MP primary quad rear camera and a 32MP selfie camera at the front.

If this indeed comes true, then Moto will be the third brand after Xiaomi and Realme to launch a mid-range phone with a 108MP primary rear sensor. Moving further, it is possible that Moto G60 features a 120Hz refresh rate display and packs a large capacity battery for long backup. Either way, we are now excited to hear more about these two new Moto G phones from the company.

A few weeks back, Motorola launched the Moto G50 5G phone with the new Qualcomm Snapdragon 480 chipset. This device gets a price tag of EUR 250 (Rs 21,300 approx) in Europe for the 4GB + 64GB version. The phone features a 6.5-inch IPS LCD display with HD+ resolution and 90Hz refresh rate support.

The Moto G50 runs on stock Android 11 OS. It comes with a triple rear camera that includes a 48MP main sensor, a 5MP macro camera, and a 2MP depth sensor. On the front, it gets a 13MP selfie camera.