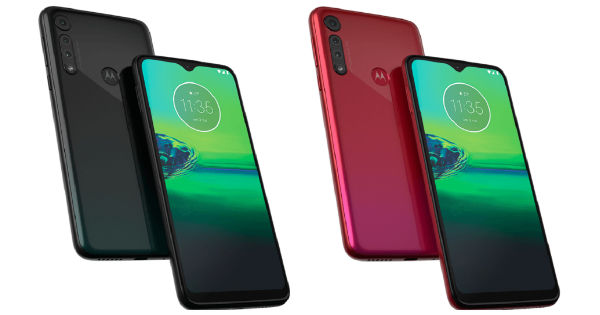 The Moto G8-series is under development just eight months after it introduced the Moto G7 lineup back in February. Now, renders and specifications of Moto G8 Plus have made their way online, showing even the budget model will have triple rear cameras this time around. We can also see the design changes the company is adopting, such as getting rid of the Motorola logo in the front to make the chin smaller and reducing the size of the notch. The Moto G8 Play specifications have also been tipped in a separate report, which also shows live images of the handset. The Moto G8 Play smartphone should be launched at an event the company is hosting in Brazil on October 24th.

In renders shared by MobielKopen, the Moto G8 Play can be seen sporting a waterdrop notch, compared to the wide notch seen on the Moto G7 Play. We can also seen the phone will stick to solid colours, have triple rear cameras, and fingerprint sensor housed in the Motorola logo. The volume rocker and power button are present on the right spine, while the USB Type-C port, speaker grille, and primary microphone reside at the bottom. The 3.5mm audio jack has been moved to the top.

A separate report, this one by the folks over at Tudocelular, tips some of the specifications of the Moto G8 Play. These include a 6.2-inch HD+ Max Vision display, 8MP selfie camera, 117-degree wide-angle sensor on the back, AI integration in the cameras for better photos, and 4,000mAh battery with fast-charging. The live image by the publication also shows the smartphone will be powered by a 2GHz octa-core processor, believed to be the Helio P60. There is no information about the other two camera sensors, but one of them could be a dedicated depth sensor for portrait shots.

Before this, the specifications and renders of Moto G8 Plus have also been leaked. The smartphone is said to sport a 6.3-inch full HD+ IPS display with 1,080 x 2,280 pixels resolution and is expected to powered by the Snapdragon 665 SoC. It is tipped to pack 4GB RAM with 64GB/ 128GB storage that could be further expandable via microSD card. In terms of optics, the Moto G8 Plus is said to rock triple camera setup consisting of a 48MP primary sensor, a 16MP wide-angle lens and a 5MP depth unit combined with laser autofocus. For selfies, it could have a 25MP snapper on the front.