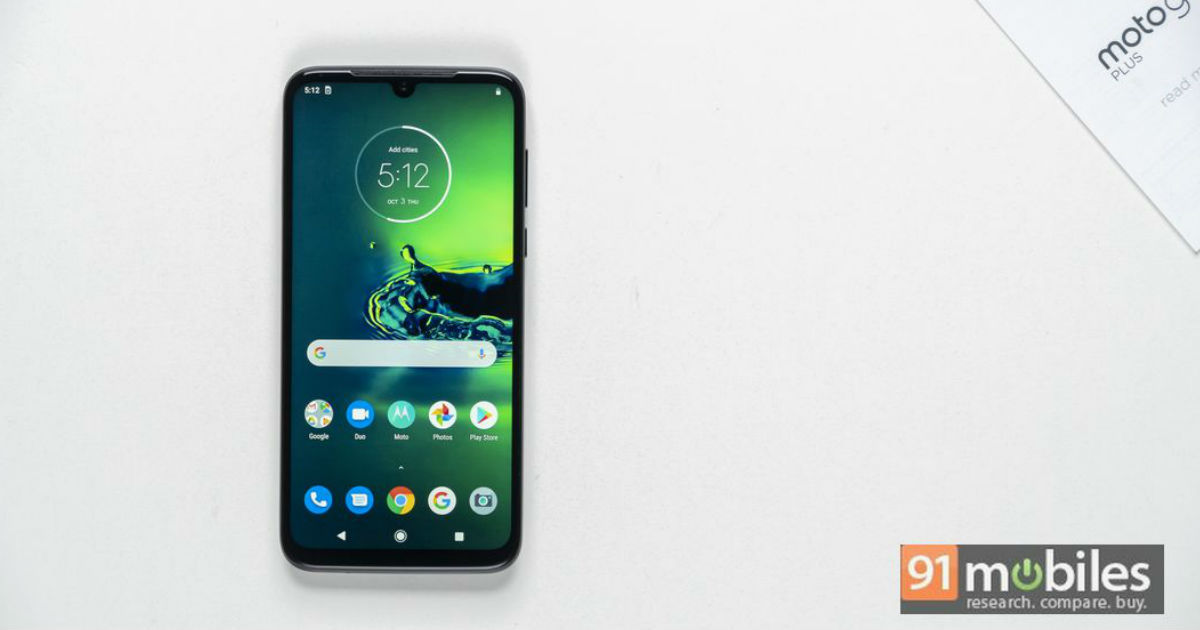 “The Moto G8 Plus is a follow-up of Moto G7 Plus smartphone from earlier this year. We go hands on”

There was a time when Motorola was considered as the major competitor of Xiaomi. But, things have changed ever since. While the Chinese brand has grown in volumes to become the numero uno phonemaker in India, Motorola is now catering to a niche audience that is looking for a smartphone with stock Android. That said, the company’s recent offers mark a shift in its strategy, and the latest device from its stables — the Moto G8 Plus — is no different. While only time will tell whether the successor to the Moto G7 Plus can turn the Lenovo-owned brand’s fortunes, we’re here to give you our initial thoughts about the Moto G8 Plus. 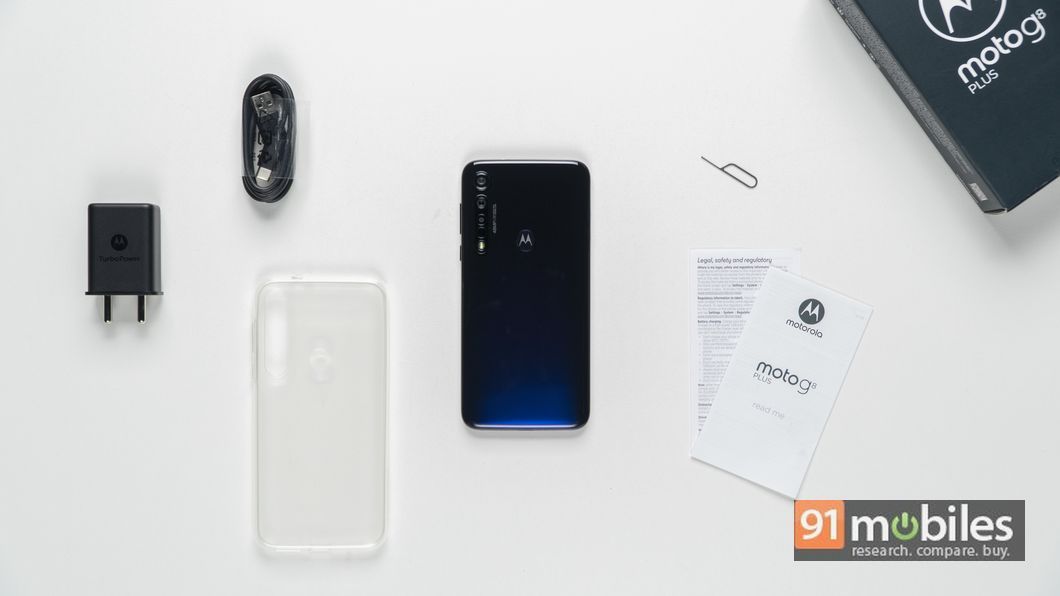 The Moto G8 Plus comes packaged inside a Seawood green colour box that has the phone’s branding up top. The key features, price, and other details are on the edges, while the image of the handset is at the back of the box. Along with the Moto G8 Plus, you’ll find a transparent case, 15W power adaptor, Type-C charging cable, some documentation, and SIM-ejector pin inside the packaging. 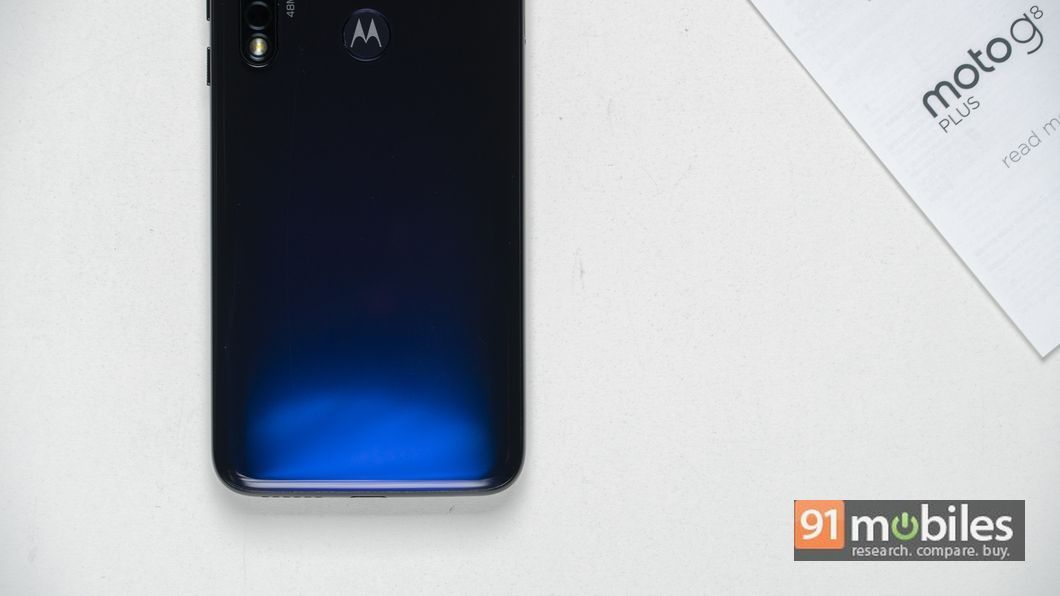 Coming to the smartphone, the Moto G8 Plus looks like any other 2019 phone in terms of the design. It’s constructed out of polycarbonate, features a waterdrop notch screen on the front, camera module at the top-right corner of the back panel with a fingerprint scanner present at the centre. We got the Cosmic Blue variant of the Moto G8 Plus. The handset has a gradient finish that shifts from black to purplish-blue hue when light hits it at a certain angle. 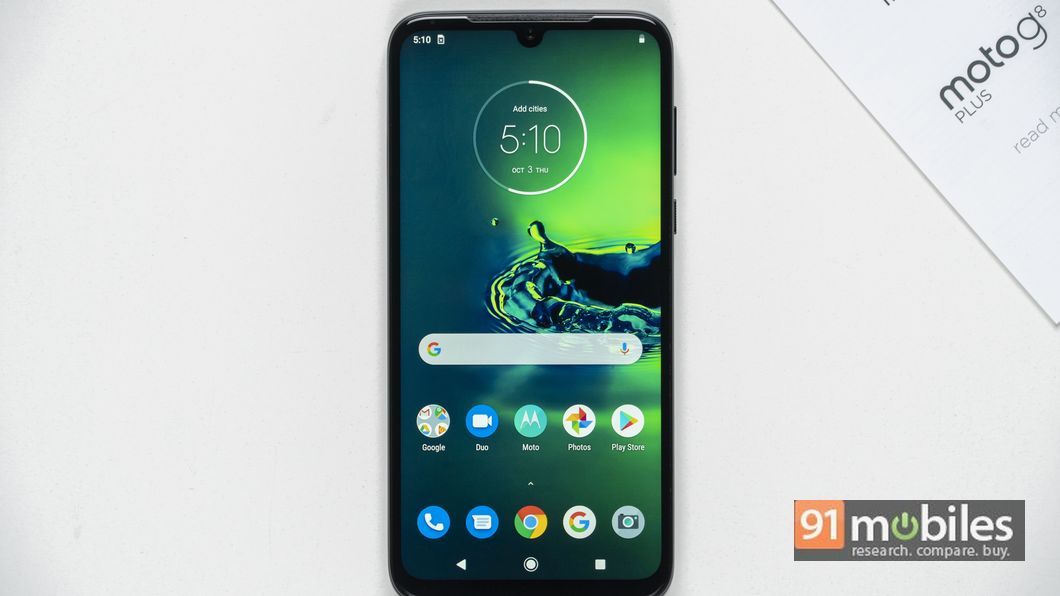 The right edge of the phone features the textured power button, and a volume rocker, while the hybrid dual SIM-ejection tray is placed on the left spine. The bottom of the phone has Type-C charging port sandwiched in between the speaker grill and a microphone. Fret not, the company hasn’t ditched the 3.5mm headphone jack; it’s there at the top edge of the G8 Plus along with a secondary microphone. Motorola claims that the Moto G8 Plus has a water-repellent design that protects the phone from accidental spills and splashes. 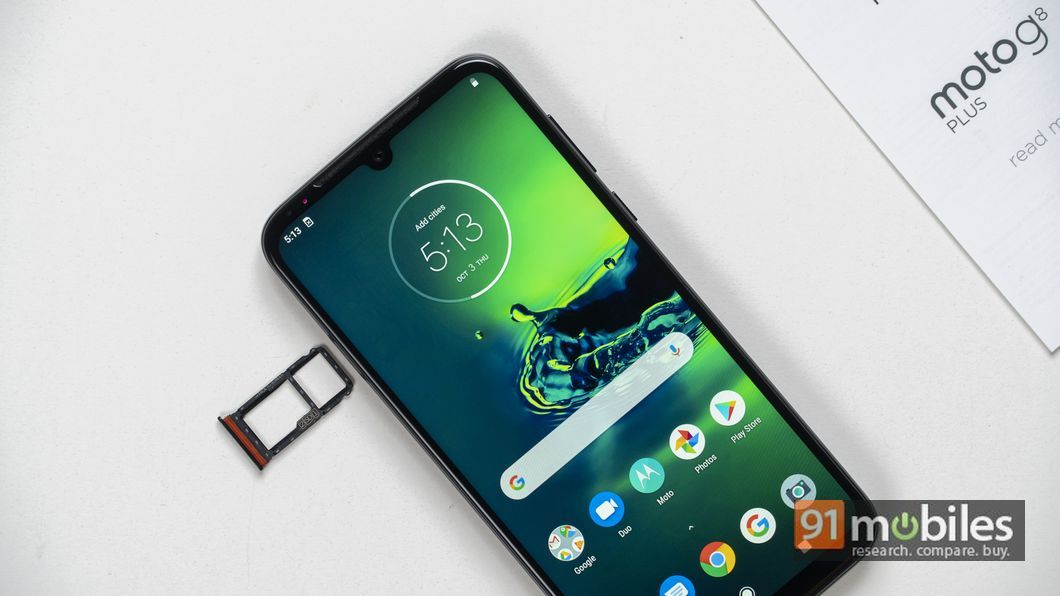 The overall build of Moto G8 Plus is quite solid and premium, though the camera module protrudes from the body and hence the device wobbles when it’s placed on a surface. The positioning of the buttons and fingerprint scanner is well within reach. However, we must point out that the phone is quite slippery and is prone to fingerprints and smudges as well. Hence, we’d advise you slap a case or skin as soon as you take the handset out of the box. 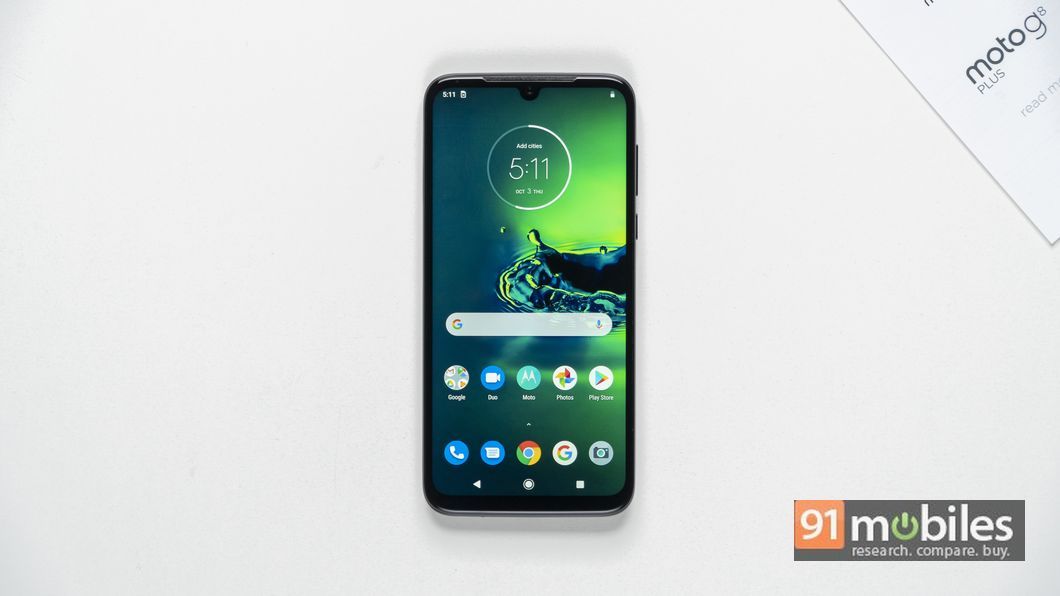 The Moto G8 Plus ships with a 6.3-inch display, which the company likes to call MaxVision screen thanks to the notch up top and 19:9 aspect ratio. The LCD panel has minimal bezels around and bears a full HD+ resolution. As for the quality, the screen is crisp, vibrant, offers good brightness levels and viewing angles. 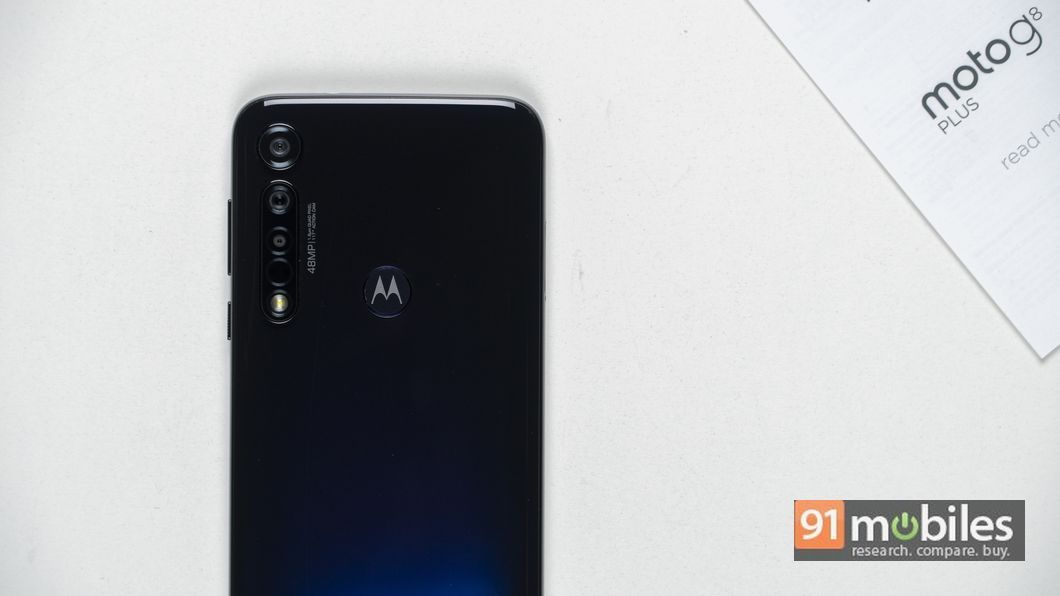 Under the hood, the Moto G8 Plus is powered by the Qualcomm Snapdragon 665 mobile platform, which is the latest SoC from the chipmaker in the SD6xx series. The silicon is paired with 4GB of RAM and 64GB storage onboard, which is further expandable up to 512GB using a microSD card. We didn’t encounter any stutter or lag during our short stint with the phone. Apps opened quickly and multi-tasking was as smooth as it gets. 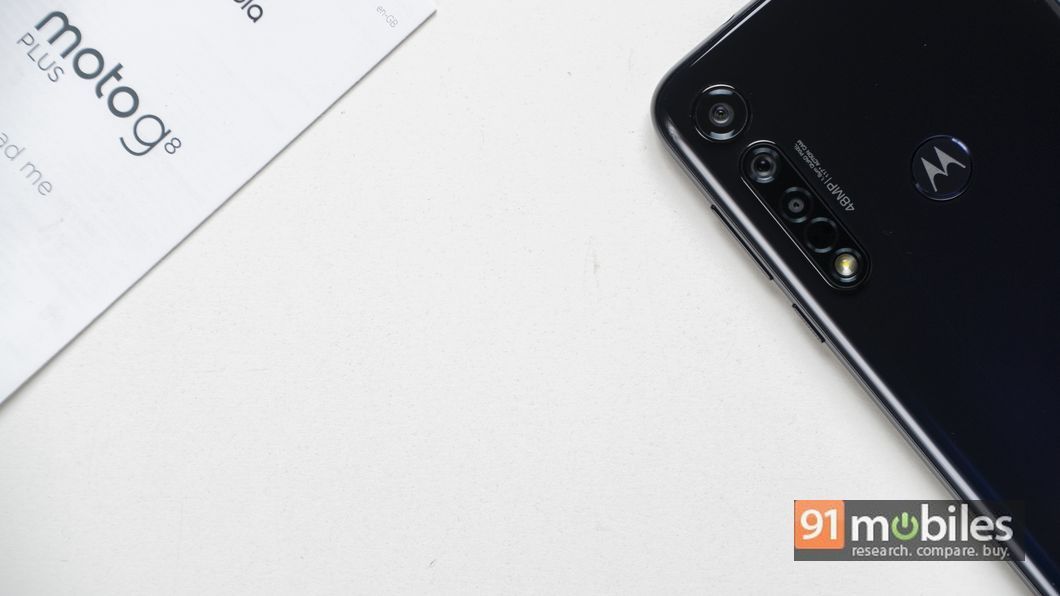 The Moto G8 Plus’ cameras promise quite a few interesting features, including Night Vision for better low-light photography, ultra-wide action video camera, fast and accurate laser autofocus, slow-mo video, portrait mode, time-lapse, and more. The handset achieves all that with a triple-camera setup that’s headlined by a 48-megapixel primary sensor that has quad-pixel technology and an f/2.0 aperture lens. This is paired with a 5-megapixel depth-sensing unit and a 16-megapixel action cam with 117-degree field-of-view that’s rotated 90-degrees, just like the One Action (review). Then there’s laser autofocus which promises quick focusing abilities. The front camera of the phone features an impressive 25-megapixel shooter. The array of cameras does add versatility, and if the brand’s recent offerings are anything to go by, we’ve high hopes from the setup, and are keen to test them out as part of the Moto G8 Plus review. 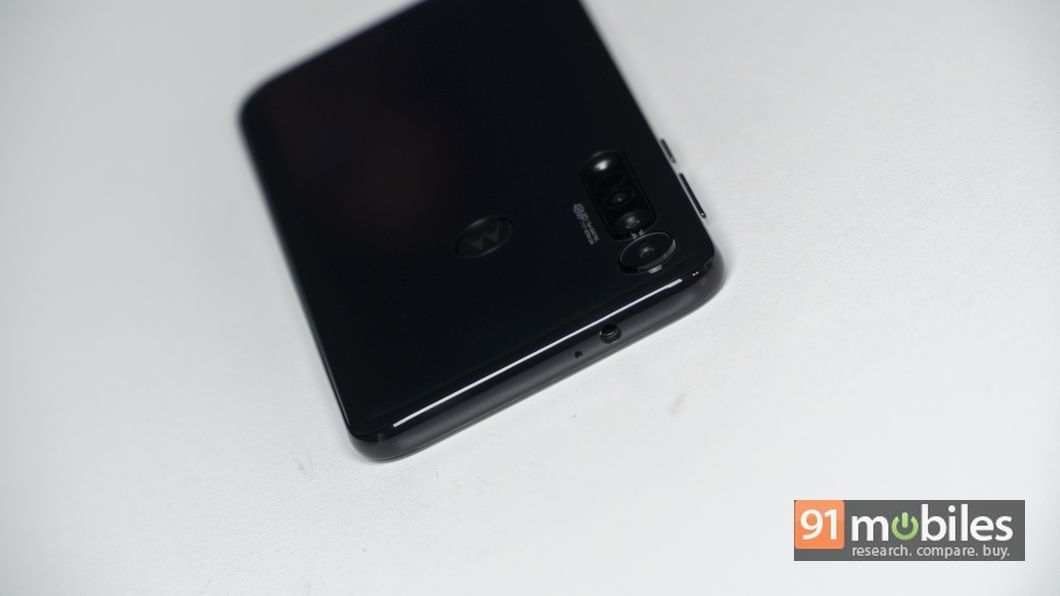 The Moto G8 Plus houses a 4,000mAh battery with 15W TurboPower charging technology. The tech is rated to add eight hours of power in just 15 minutes. Software-wise, the phone boots Android 9.0 Pie with stock Android interface out of the box. Other highlights of the handset include stereo speakers with smart PA and Dolby Atmos, Bluetooth 5.0 support, and a dedicated microSD card slot.

The Moto G8 Plus bridges the gap between the company’s Motorola One Action and mid-range Motorola One Vision (review) smartphones. With the price tag of Rs 13,999, the handset comes across as a worthy offering in this segment. That said, it faces tough competition from the Redmi Note 8 Pro (first impressions), which boasts an impressive spec sheet, including the 64MP quad-camera module and beefier 4,500mAh battery.