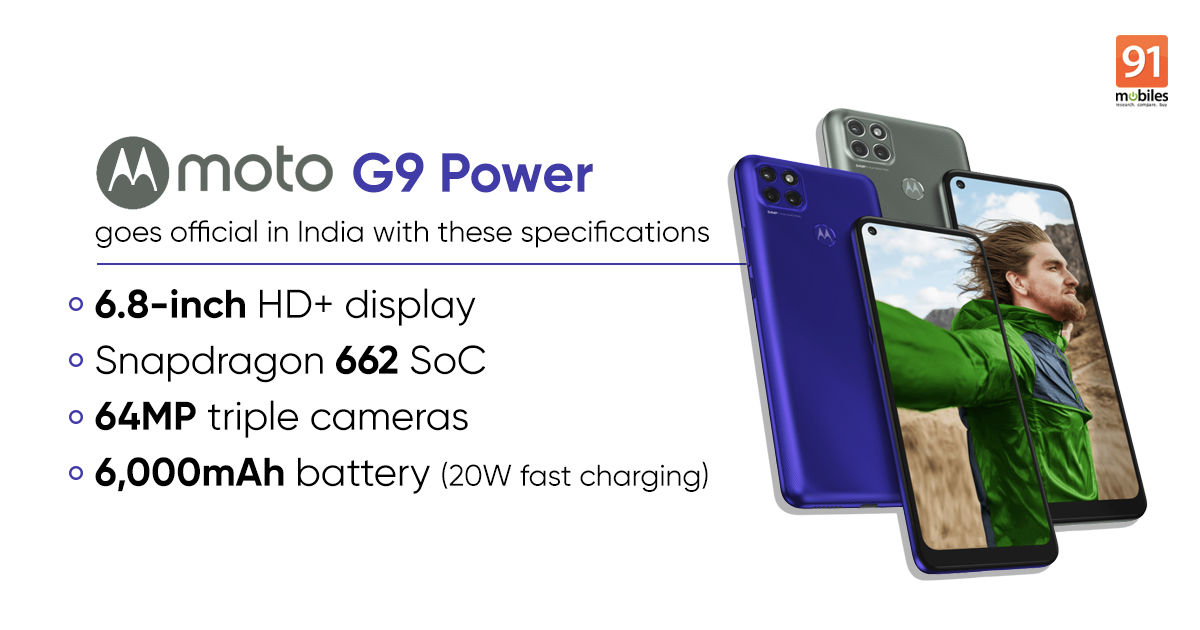 Moto G9 Power price in India, specifications, and availability details have been announced as the phone goes official in the country. The handset is a souped-up version of the Moto G9, which was released in the country back in August. Moto G9 Power specifications remain the same as the global variant, which means you get a 6.8-inch HD+ display with a standard 60Hz refresh rate, a whopping 6,000mAh battery, 64MP triple cameras, and Snapdragon 662 SoC. Additionally, the smartphone highlights a punch-hole display, squarish camera module, and a physical fingerprint sensor embedded in the Moto dimple.

Moto G9 Power price in India is Rs 11,999 and it comes with 4GB RAM and 64GB internal storage. The handset comes in Electric Violet and Metallic Sage colour options and will go on sale on Flipkart starting December 15th at 12 PM IST. Bank offers include a Rs 1,750 instant discount on HDFC Bank Credit Card and Debit EMI, 5 per cent unlimited cashback on Flipkart Axis Bank Credit Card, and more.

The Moto G9 Power comes with dual SIM support and runs Android 10 OS out of the box to take care of the software side of things. The handset sports a 6.8-inch HD+ (720 x 1,640 pixels) IPS display with a cut-out in the top left corner for the selfie camera. The phone is powered by the Qualcomm Snapdragon 662 chipset paired with 4GB of RAM and 64GB storage onboard that is expandable via microSD card (up to 512GB).

Other Moto G9 Power specifications include a triple rear camera setup that houses a 64MP primary sensor with an f/1.79 lens, a 2MP macro lens, and a 2MP depth sensor. For selfies and video chats, there is a 16MP front-facing camera. The phone employs a rear-mounted fingerprint scanner and a whopping 6,000mAh battery with 20W fast charging support. In terms of connectivity, the Moto G9 Power features 4G LTE, Wi-Fi 802.11ac, Bluetooth v5.0, GPS/ A-GPS, NFC, USB Type-C, and a 3.5mm headphone jack.