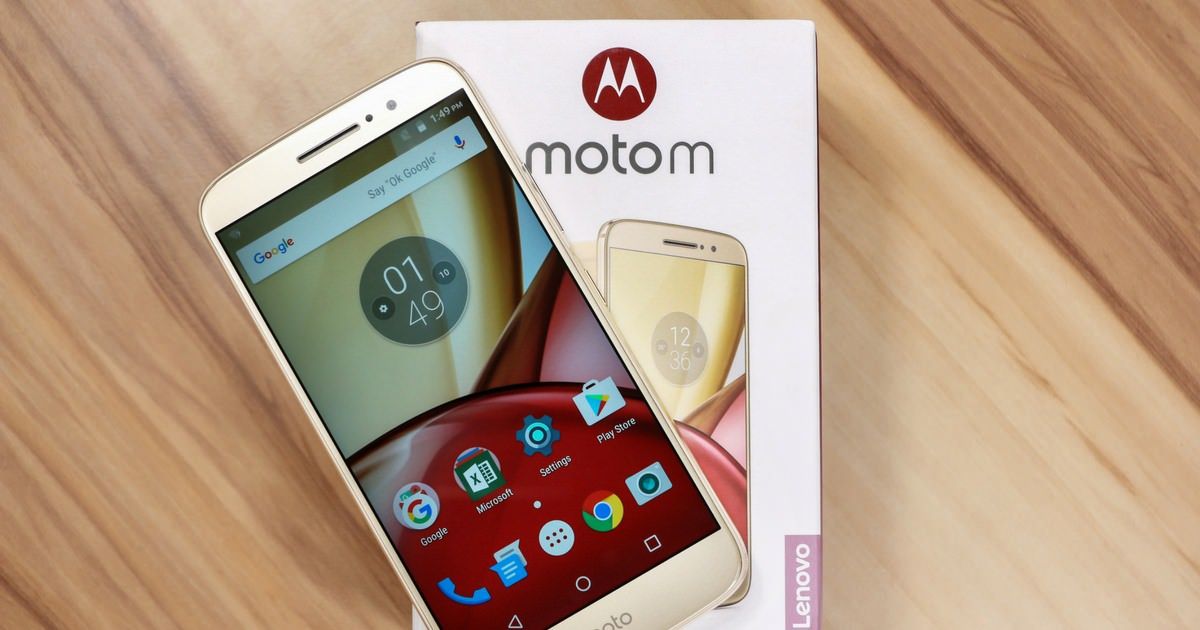 “The Moto M marks a new design philosophy for the brand” 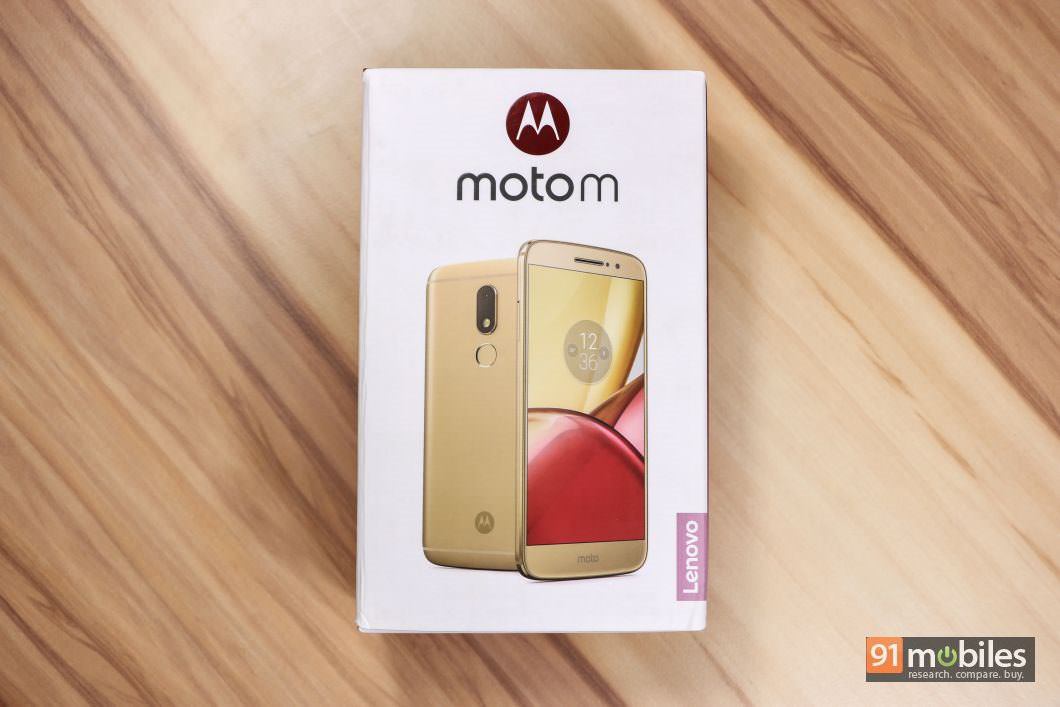 The Lenovo-owned Moto covers the entire price spectrum with its smartphone offerings, starting from the budget segment under Rs 10,000 and going all the way up to Rs 40,000. However last year, it didn’t have any contender in the mid-tier segment between Rs 15,000 and 25,000. The Moto M, which was launched towards the end of 2016, fills this void. The device has already garnered a lot of attention as it ranks among the top 20 most popular phones of last month. We just got our hands on the higher-end Moto M, and as we prep it for its review grind, here’s a quick look at the retail box contents followed by our hands-on experience of the smartphone.

The retail box of the Moto M is quite standard, with the image of the handset on the front. While the first thing you get as soon as you open the package is the smartphone itself, it packs in a lot of goodies when compared to previous Moto offerings. You get a wall charger which supports fast charging, a Type-C cable, a SIM-ejection tool, a pair of flimsy-looking earphones, and the usual documentation. For protecting the smartphone, you get a screen guard and a transparent silicon cover. 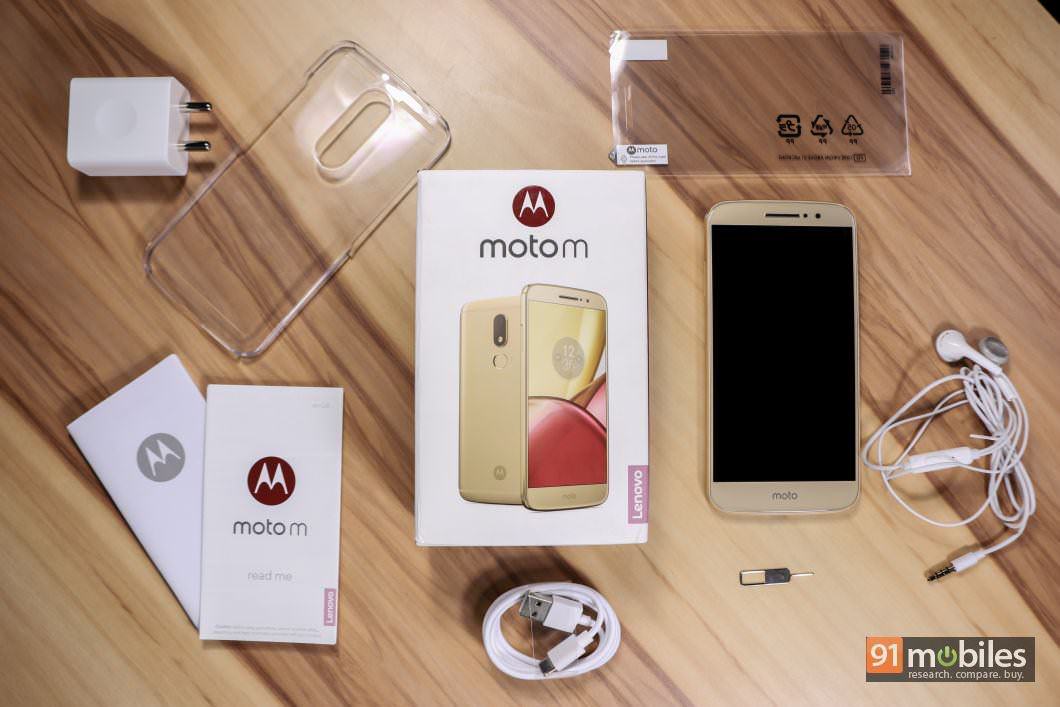 The first thing that grabs your attention as soon as you see the Moto M is how different it looks when compared to previous offerings from the brand. The plastic and rubber bodies have given way to a gorgeous handset with unibody metallic construction. The phablet marks a new design philosophy for Moto smartphones, and seems to inspired by HTC’s ethos. You get a curved rear, which improves the ergonomics factor. 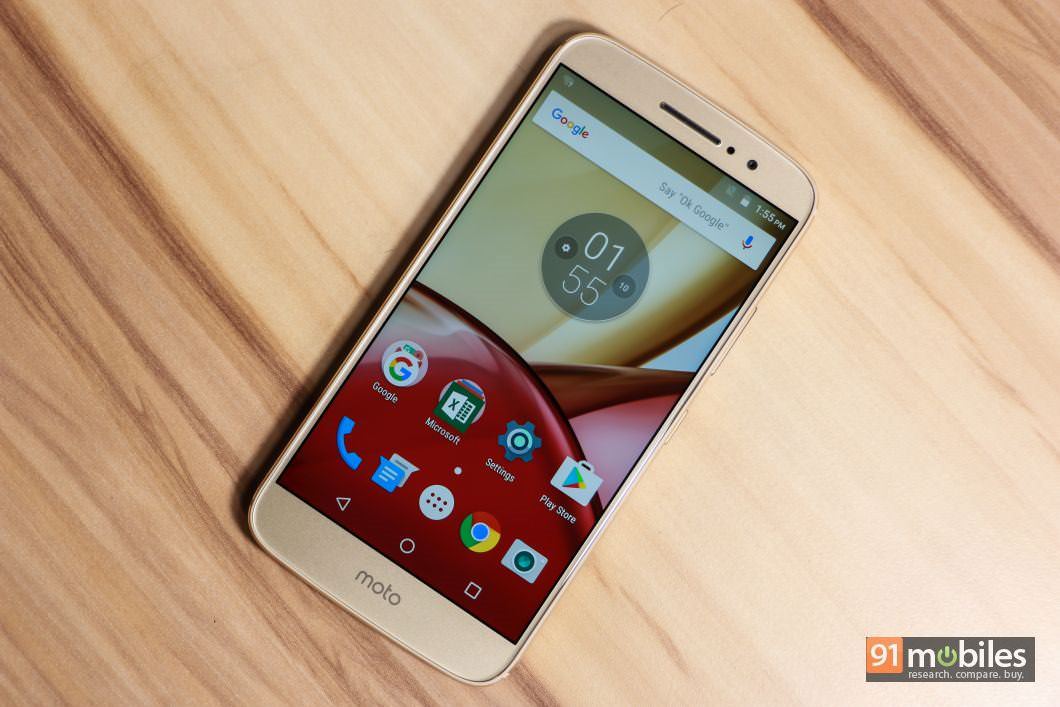 The positioning of buttons and ports is nothing new. You can find a textured power switch on the right along with the volume controls, whereas an ejectable tray (that accepts a nano-SIM and either a nano-SIM or a microSD card) can be found on the left spine. The 3.5mm audio interface is placed up top. With the Moto M, the company is also moving towards the next-gen bi-directional USB Type-C port, which is available on its base and flanked by speaker grilles (only one of them work as a speaker).

Along with embarking on a new design journey for the brand, the Moto M is also the first phone in the family that sports a fingerprint scanner at the back. Based on our initial usage, it seems swift and accurate, and its placement also makes it easier to access. At the rear, you’ll also find the primary shooter, which juts out slightly, and is accompanied by an LED flash. 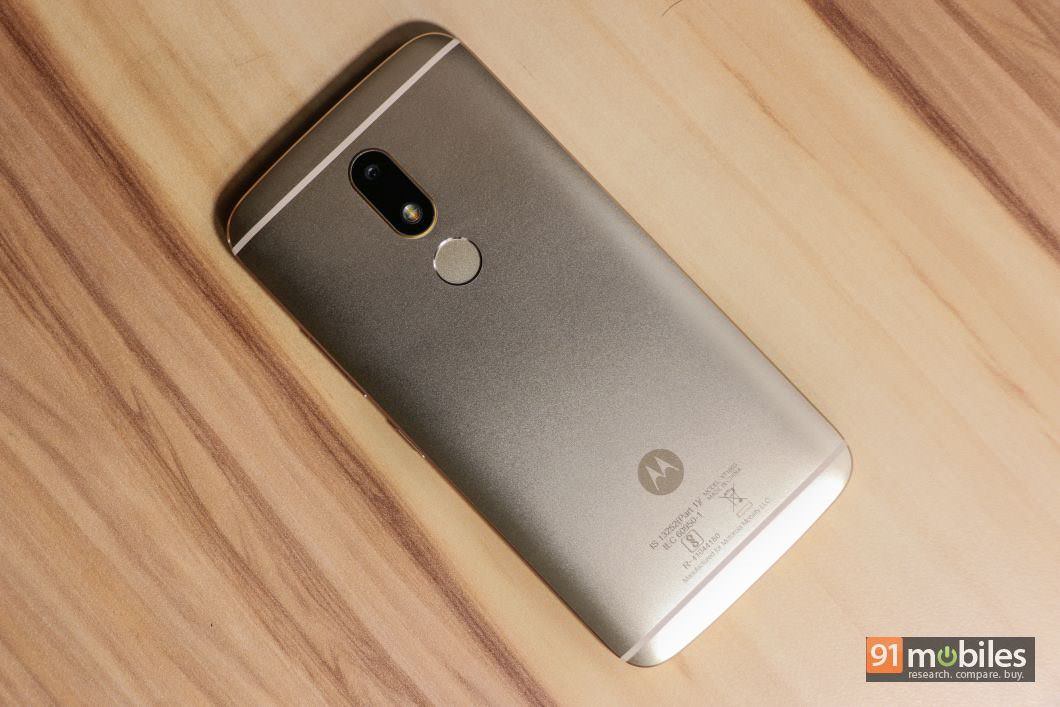 The Moto M flaunts a 5.5-inch display sporting a full HD resolution. With a pixel density of 403ppi, the screen remains plenty sharp, although the brightness levels don’t seem sufficient. We doubt if it’d be legible under harsh sunlight even at the full brightness. 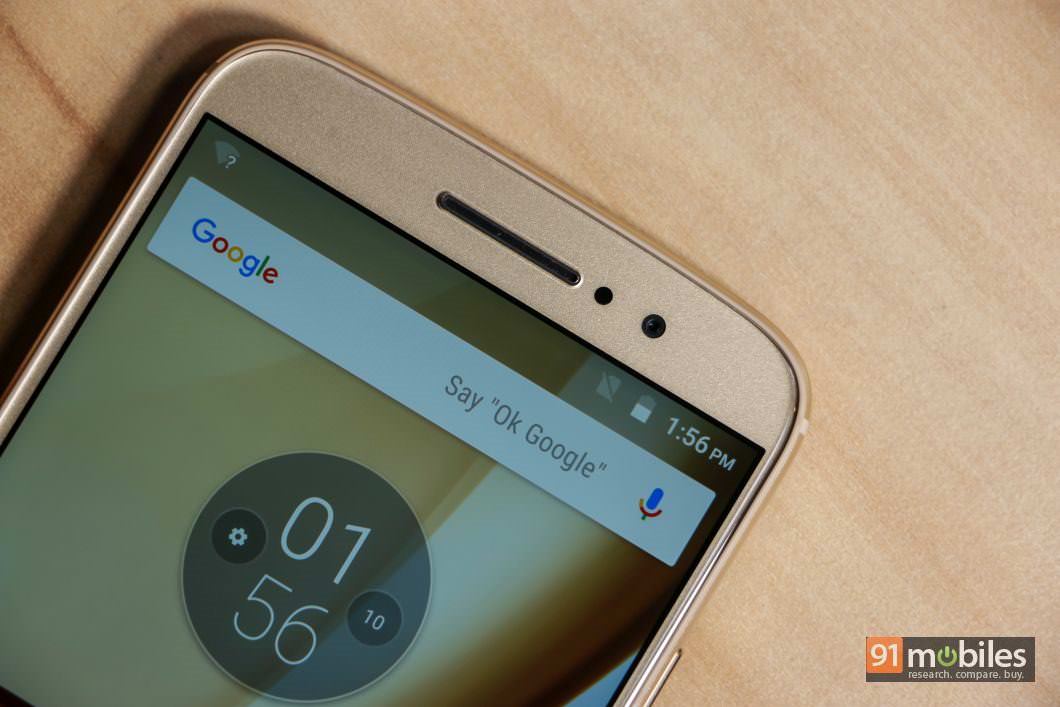 Moto has always maintained high standards for its devices, from promising quick software updates to opting for Qualcomm’s Snapdragon chipsets. However, under the tutelage of Lenovo, it has started to change itself with the Moto e3 Power (review) being the first smartphone to draw power from a MediaTek SoC. The same is the case with the Moto M, which comes equipped with MediaTek’s Helio P15 processor. The chip offers eight cores which are clocked at 2.2GHz. It surely seems quite capable in offering lag-free performance even while running heavy games, which is supplemented by up to 4GB of RAM. Based on the RAM variants, you will get either 32GB or 64GB of memory onboard.

The Moto M boots Android 6.0 Marshmallow, and the brand is promising an upgrade to Nougat soon. As mentioned earlier, the brand is changing under Lenovo and the effects of the same can be seen in the software department too. While you do get stock interface, you also get some preinstalled apps from Microsoft’s suite such as Word, Excel, and Skype. What’s even more surprising however, is the fact that the device is stripped off the trademark Moto features as well. Features like Moto Display that provides notifications without the need to unlock the smartphone, and Moto Actions that lets you open the camera via a double twist and the other signature Moto goodies and all absent on the Moto M. 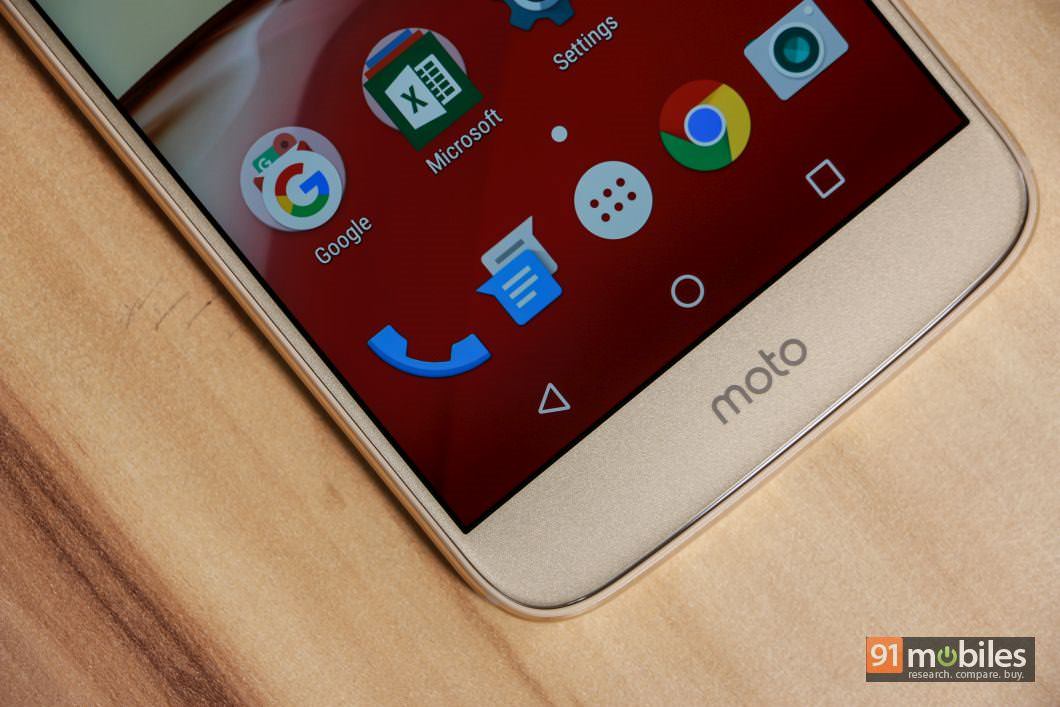 Camera-wise, the Moto M boasts a 16-megapixel sensor with PDAF autofocussing technology. It gets assistance from a dual-colour flash to provide illumination in low light. For selfies, the phone gets an 8MP shooter. With the G4 Plus (review), Moto started offering a new camera interface which while being minimal also came with various features, including a Pro mode. The same app is available on this handset as well. 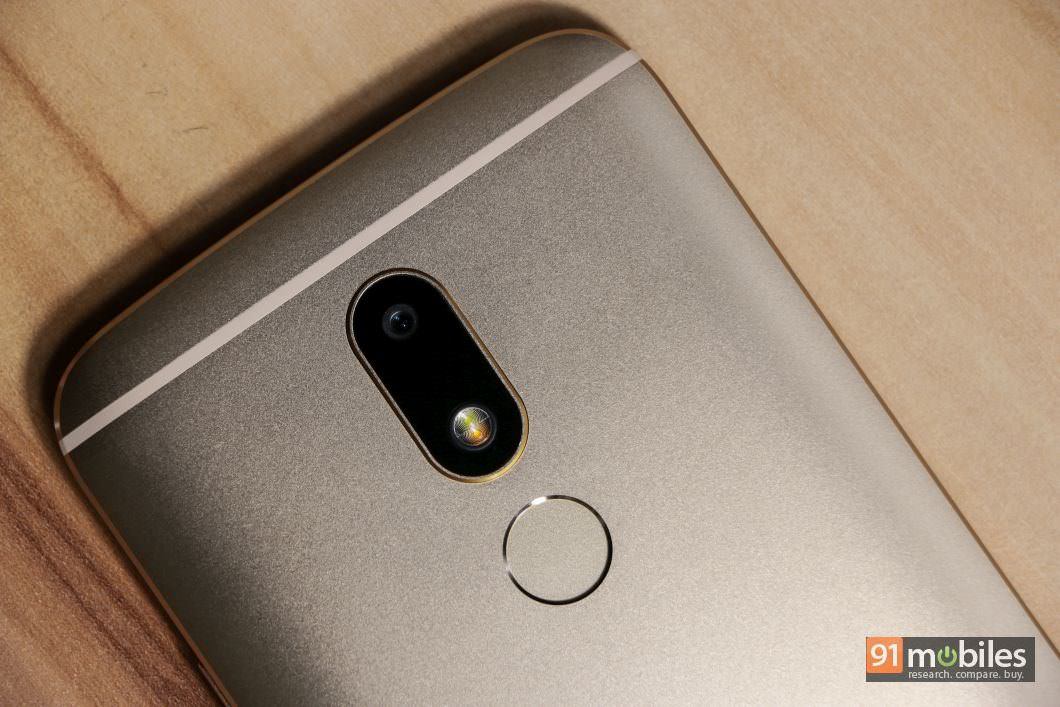 In a way, the Moto M replaces the Moto X Play (review), released in October 2015, which was priced similarly and along with decent specs, boasted long-lasting battery life thanks to a 3,630mAh cell. Sadly, the Moto M doesn’t have that bragging factor as it’s fuelled by a 3,050mAh battery that should just be enough for a day’s usage. Thankfully though, the bundled adapter should juice it up quickly. 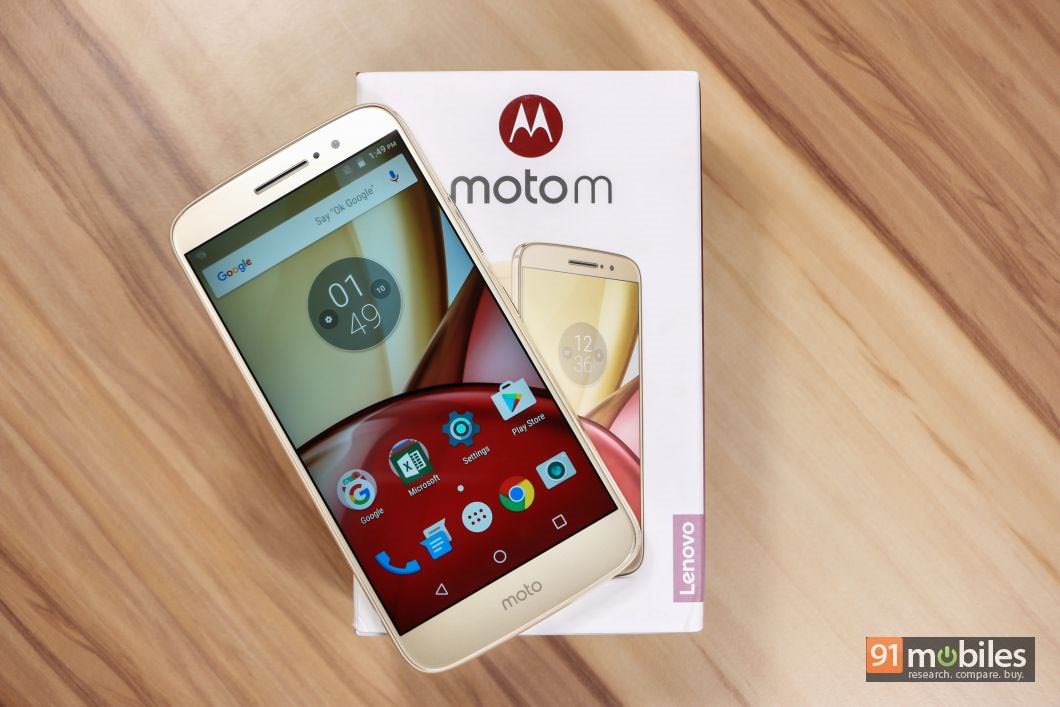 With a sticker price of Rs 15,999 for the 3GB RAM model, and Rs 17,999 for the pricier variant, the Moto M generates mixed feelings. While it tries to plug the mid-range gap for the brand, it competes with its own siblings and cousins from Lenovo. The Moto G4 Plus is available for Rs 14,999, and apart from the obvious differences in the design language, they’re pretty similar. Lenovo on the other hand, has the K6 Note and P2 that promise marathon battery life, whereas its ZUK Z2 Plus (review) is one of the most affordable phones powered by the flagship-level Snapdragon 820 CPU. Of course, we will be testing the Moto M’s capabilities extensively to see where it stands, so stay tuned for our review.