“The new Moto Razr is a modern take on an iconic, nostalgia-inducing phone”

This is the second foldable smartphone I’m covering this month, and it’s still February. 2020 is already shaping up to be the year of foldables, and I’m not complaining. The new Moto Razr, to be fair, was announced late last year, but is finally making its way to our shores now. The vertically-folding clamshell design meanwhile, has also been utilised by Samsung for its new Galaxy Z Flip (first impressions), and that device is already available on pre-order. The new Moto Razr, which comes as a modern reincarnation of the iconic, original Razr that sold like hot cakes back in the day, does look rather special. Here’s a closer look. 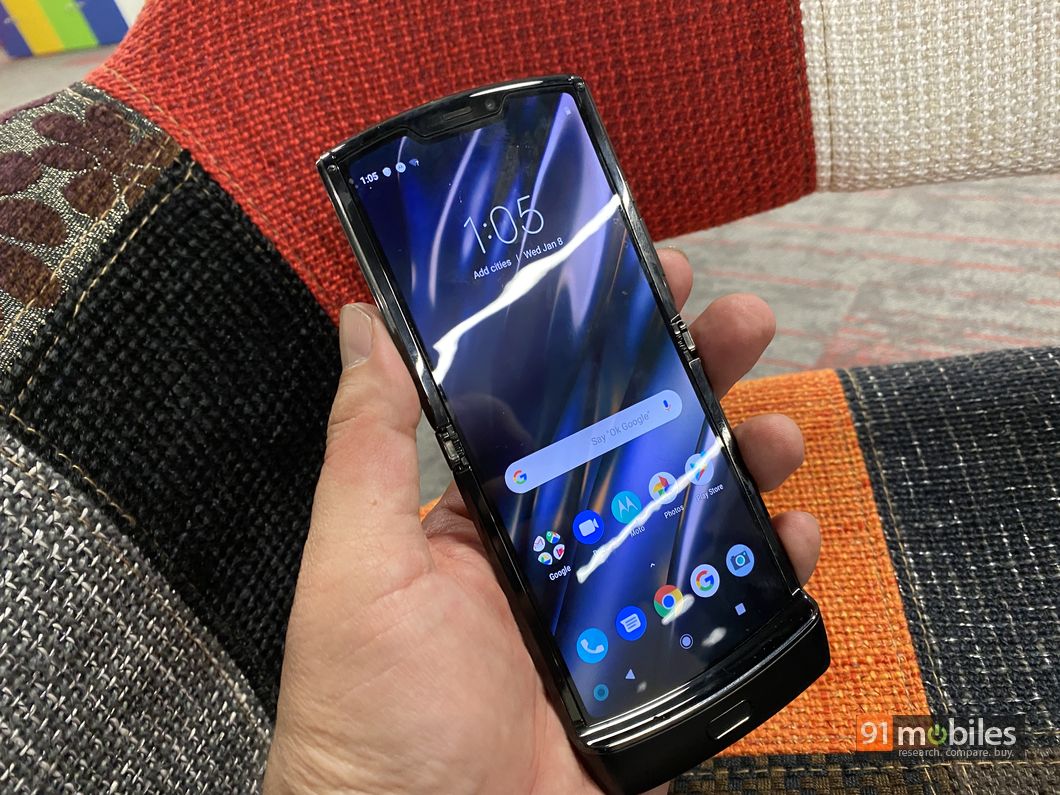 Unboxing the new Moto Razr is an experience in itself, given the funky-looking box it comes in. Opening the spaceship-shaped package reveals the handset inside, standing with its screen unfolded in a cavity right in the middle of the box. 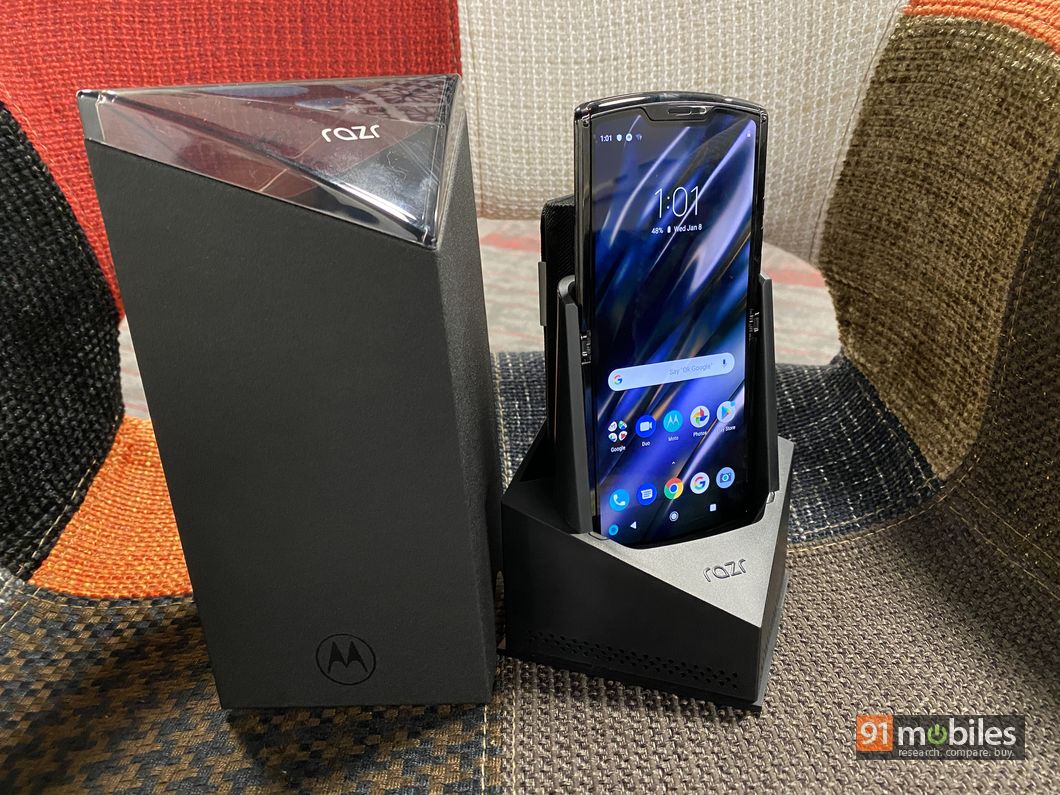 Worth mentioning that the plastic enclosure at the bottom of the package has holes that turn the box into an acoustic chamber, amplifying audio from the device’s bottom-firing speaker. Right behind the handset, there’s a premium-looking fabric-clad box that resembles a spectacles case, and holds all the accessories. These include a wall charger, USB-C cable, a wired headset, and since the device lacks a 3.5mm headset socket, an audio adapter as well. 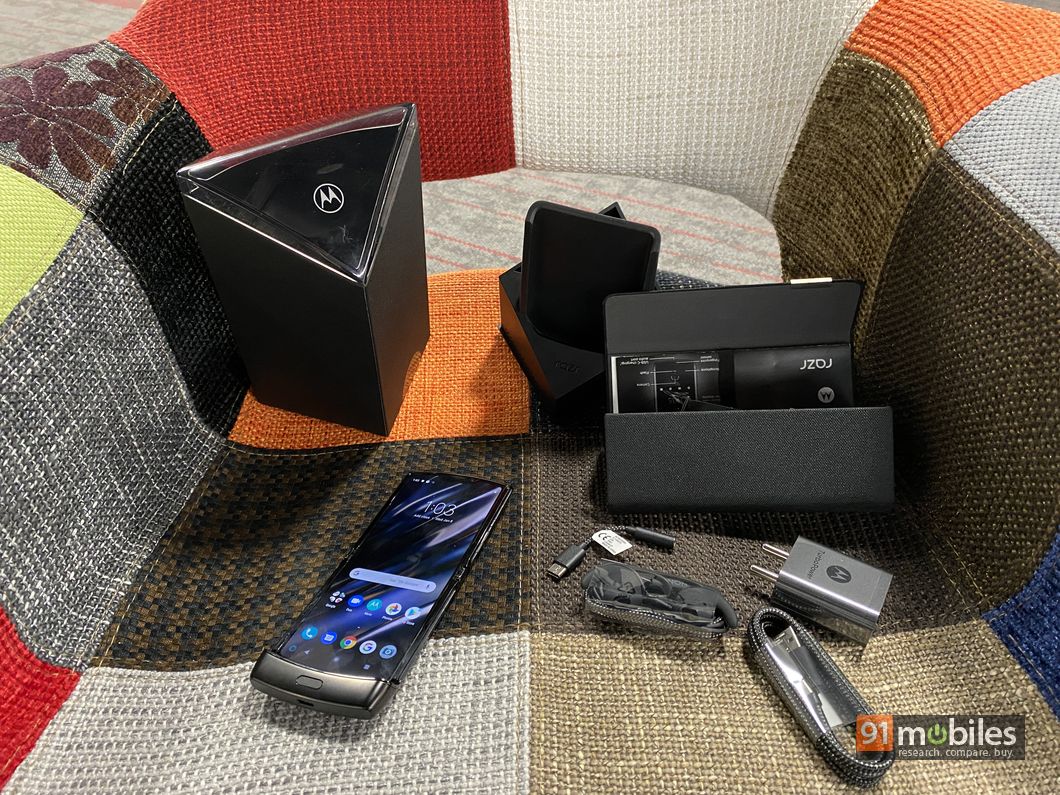 Coming to the handset itself, it’s a delight from the moment one lays their hands on it. Sleek, and seemingly well built, the new Moto Razr seems pretty cool… folding neatly into a compact little slab. Barring the thick chin at the bottom which holds the fingerprint scanner, the rest of the device is quite svelte, and manages to recreate the magic of the original Razr quite well, at least in terms of the design. 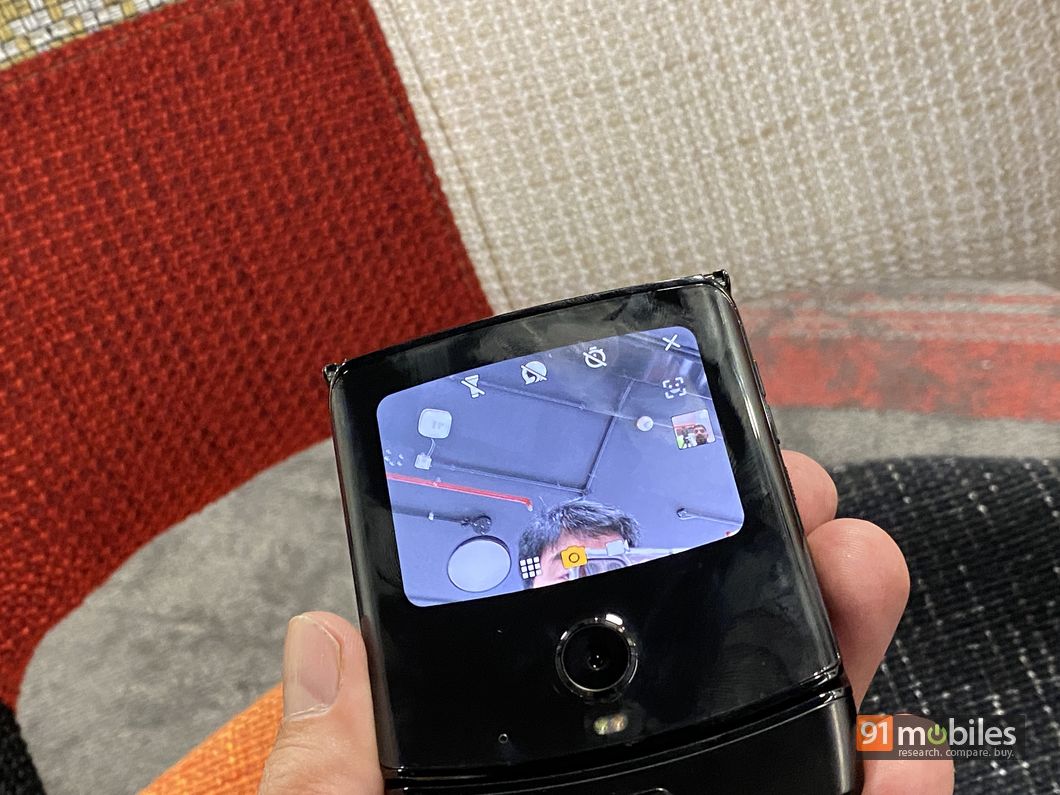 The secondary screen on the top (referred to as Quick View display) measures 2.7-inches, and is touch enabled, showing quick setting with a downward swipe, notifications, emails, messages, incoming calls and other details like time, signal strength, battery status etc. It even acts as a viewfinder for the main camera, letting you shoot selfies without unfolding the phone. 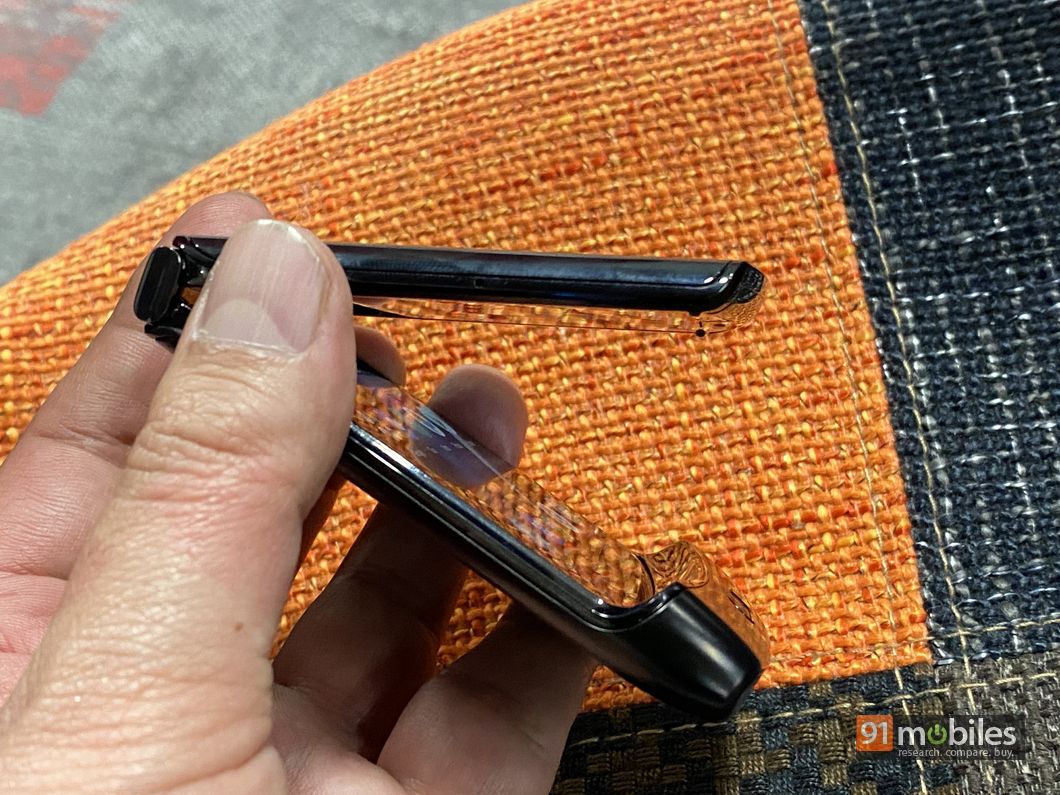 Opening up the device reveals the Flex display, measuring 6.2-inches in size, and bearing a tall 21:9 aspect ratio and a resolution of 2,142 x 876 pixels. As per Motorola, the plastic display employs a unique folding mechanism that doesn’t let it crease in the middle, as the main display actually slides down a bit into the chin when the device is folded. And in my experience, there’s no visible crease, though one can feel a bit of a bump while running a finger across the panel. Addressing the elephant in the room, it’s tough to say whether the new Moto Razr would be able to withstand the rigours of daily use. As it stands right now, there are not enough foldable devices out there in the wild to be able to form a reference benchmark. Motorola is quick to point out that the so-called Zero gap hinge helps protect the display. And I can vouch for the fact that the hinge does help make the phone close with both sides sitting flush with each other.

The other elements on the device include a Type-C port at the bottom, along with the speaker. The smallish power key and thin volume rocker are placed on the right spine, on the top half of the device. When open, the top of the main screen has a notch, with the earpiece and another camera integrated within. While the main camera can handle selfie duties on its own, the secondary 5MP camera can come in useful for videos calls. There’s no 3.5mm headphone jack, but worth special mention is the fact that there’s no SIM tray or slot anywhere on the device, since the device only has an eSIM and doesn’t make use of physical SIM cards. 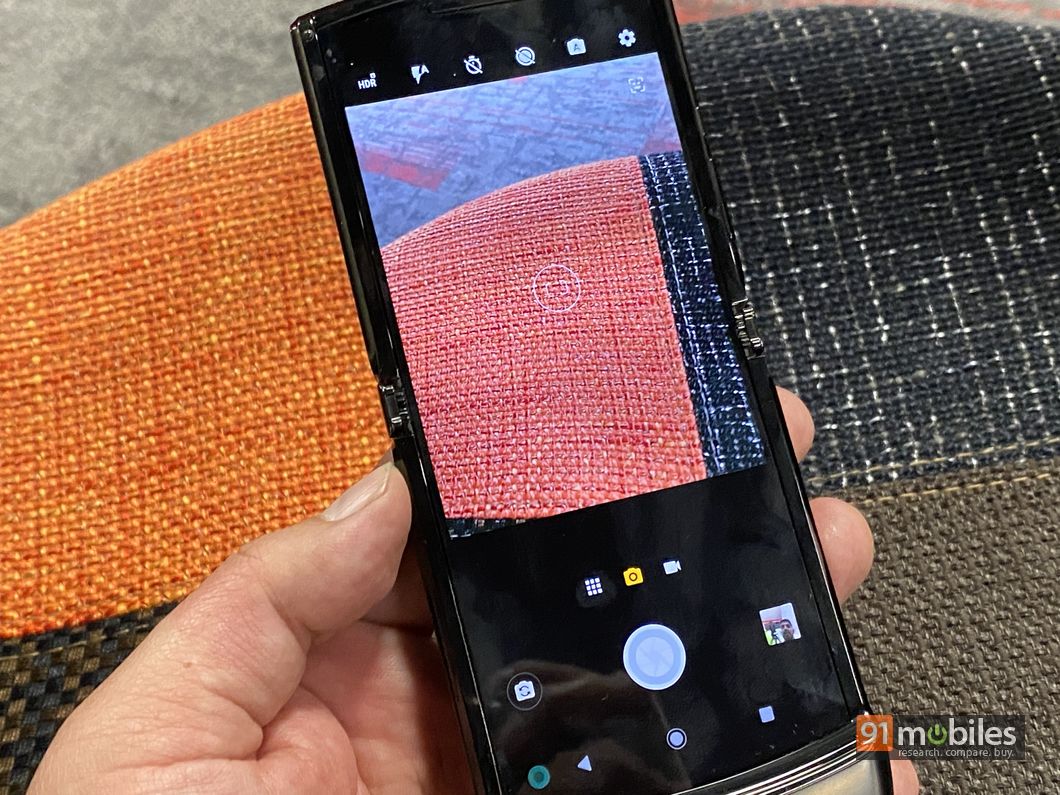 When it comes to the innards, the new Moto Razr has mid-range specs that aren’t really worth shouting about. It’s powered by a Qualcomm Snapdragon 710 processor, which is mated to 6 gigs of RAM and 128GB non-expandable storage. The 2,510mAh battery supports 15W fast charging, but there’s no wireless charging support. There’s no IP rating either, but thankfully, Motorola has included a water-repellant nano coating that makes the handset splash proof. The lone primary camera has a 16MP f/1.7 sensor with dual pixel AF, while the secondary camera inside has a 5MP sensor. Motorola has included all the usual camera features, including a dedicated night mode, hyperlapse, manual mode with RAW support, cinemagraph, Spot colour, etc. And while the UI is stock Android, signature Moto experiences like Moto Actions and Moto Display are all there. Based on past experience, I can say that most of these features are quite handy, and help enhance the user experience quite a bit. 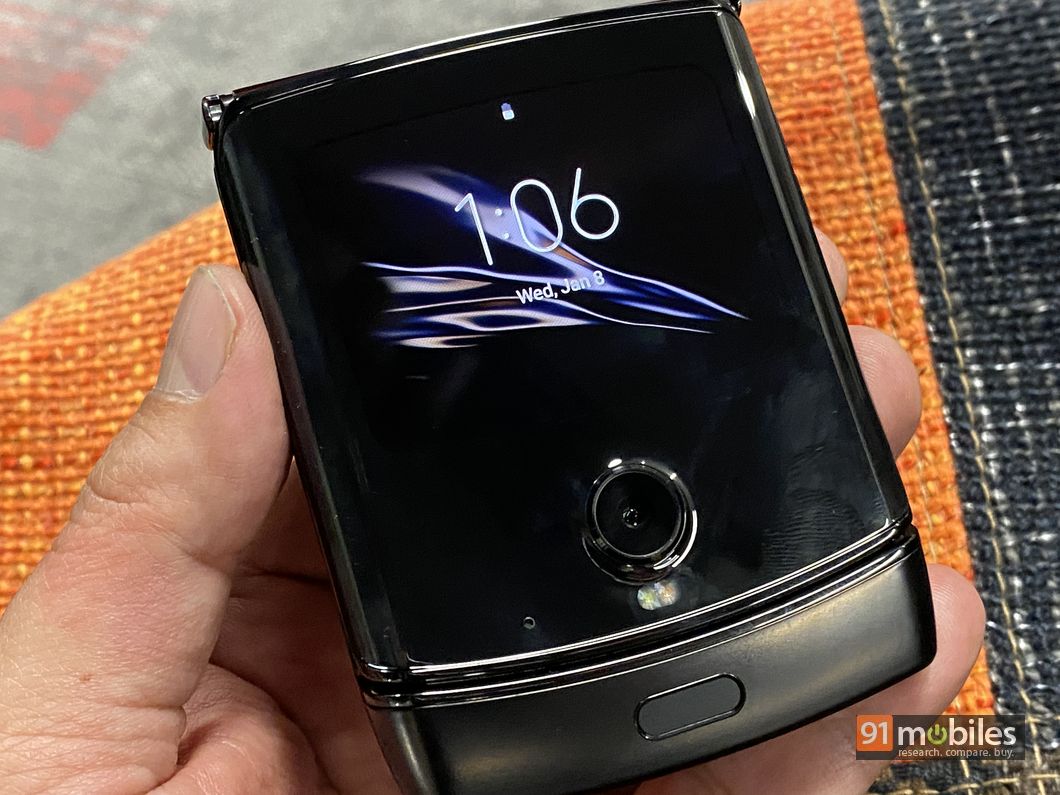 All in all, the new Moto Razr is a solid effort in terms of engineering and innovation. Whether it’s worth buying or not is a tricky question to answer though. Foldable smartphones are lifestyle choices at the moment, and not really a must have. In such a scenario, pure specs should ideally be irrelevant. However, things get convoluted thanks to the existence of the Samsung Galaxy Z Flip, a device that boasts a similar form factor but flaunts better specs. The latter is priced at Rs 1,09,999, but as of now, the Indian pricing of the new Moto Razr hasn’t been divulged. Going by its $1,500 US price tag, the new Moto Razr does seem priced on the higher side. Even if Motorola manages to price it aggressively in India and lower than the Z Flip, I’m not sure whether the price delta would be enough to tilt potential buyers in its favour. Let’s wait and watch how things play out.