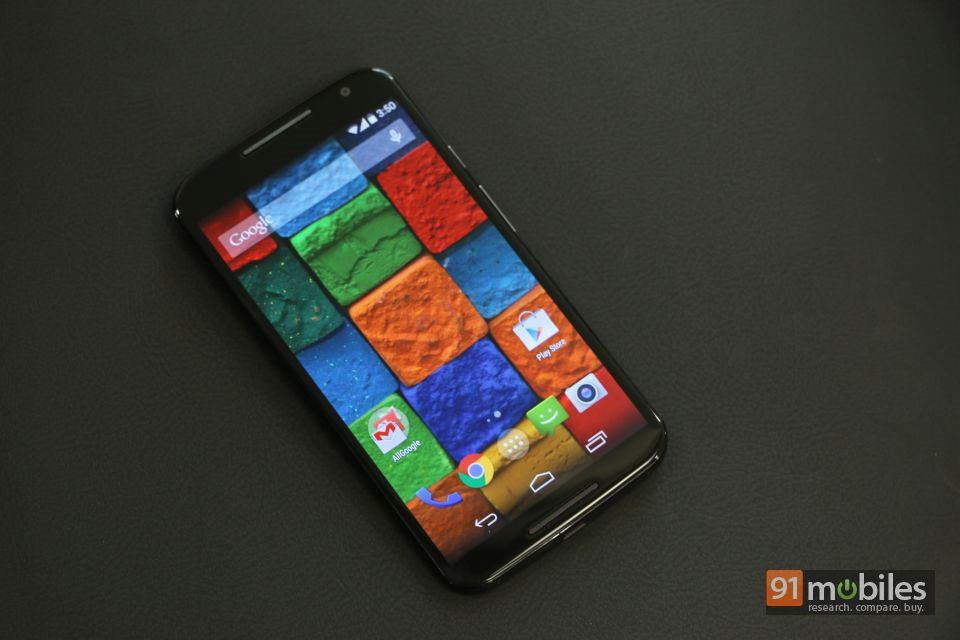 “We try to clear all your doubts about the Motorola’s latest flagship, the Moto X”

Seven years ago when the late Steve Jobs demoed the Apple iPhone for the very first time, everybody was blown away by how a touchscreen can become a primary method of interacting with a smartphone. But now this method of input is also becoming stale and people are looking at other ways of interacting with their mobile devices. Using voice is one of those ways, and the first-gen Moto X’s Touchless Control capability was a step in the right direction. As noted in our review, the smartphone has the ability to totally change the way how you use your phone. 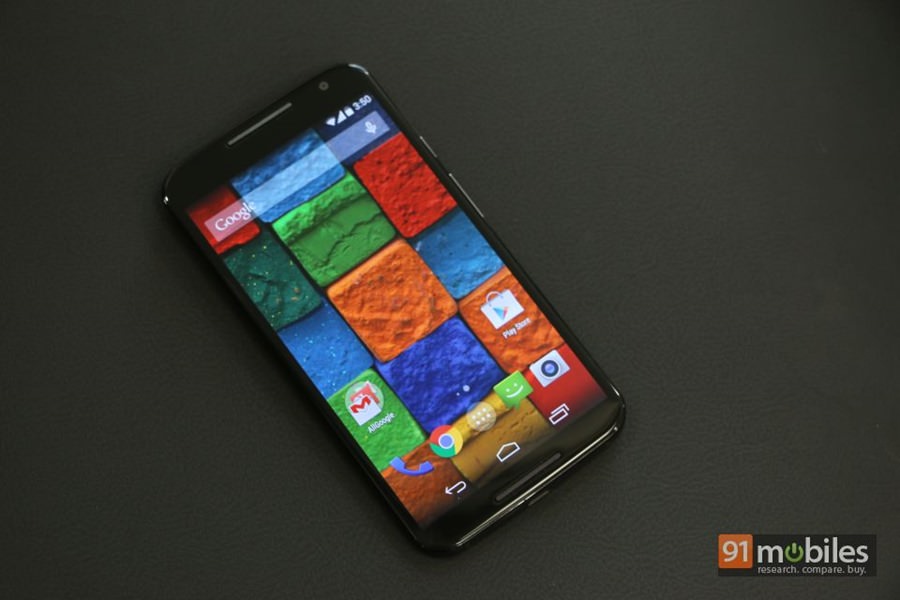 Now, Motorola has introduced the device’s successor and we’re sure you’re wondering what all it brings to the table and how it’s different from its predecessor. Well, worry not as we’ll be squashing all your doubts regarding the new Moto X in this post. So read on.

How about you start with the specs offered by the second-gen Moto X?

Sure. Unlike its predecessor, which was intended for one-handed usage, the new Moto X can be considered a phablet thanks to its large 5.2-inch display panel. The display bears a resolution of 1,920 x 1,080 pixels, equalling a pixel density of 423ppi. Inside, it’s loaded with the Qualcomm Snapdragon 801 SoC offering four Cortex-A7 cores tuned at 2.5GHz along with the Adreno 330 graphics processor. All this is put together with two low-power cores – one for listening to your voice and another for contextual actions, which the company calls the Mobile Computing System. The processing power is assisted by 2GB RAM. Juicing up the phone is a 2,300mAh non-removable battery.

What all is available in the retail box of the new Moto X? 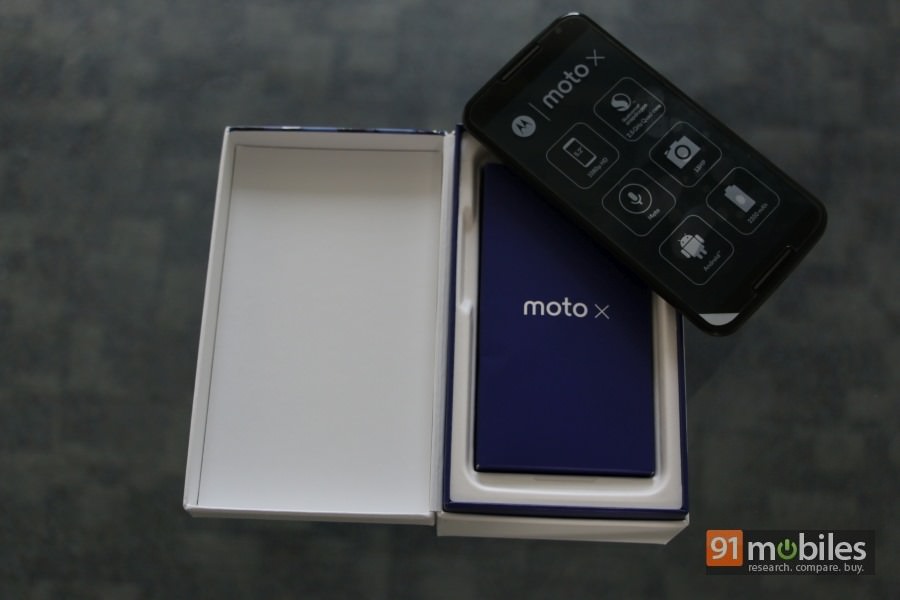 As noted in our unboxing, the device comes with standard accessories in its sales pack. These include a travel charger, a micro-USB cable, a pair of earphones and a user guide along with the device itself. There’s also an ejector tool to help you eject the SIM tray to insert your SIM card.

Is the Moto Maker service present in India? What all colours and textures is the new Moto X offered in?

Sadly, the much-touted Moto Maker feature isn’t available in India. This means you can’t choose the colour for the front and back of the smartphone as per your liking. 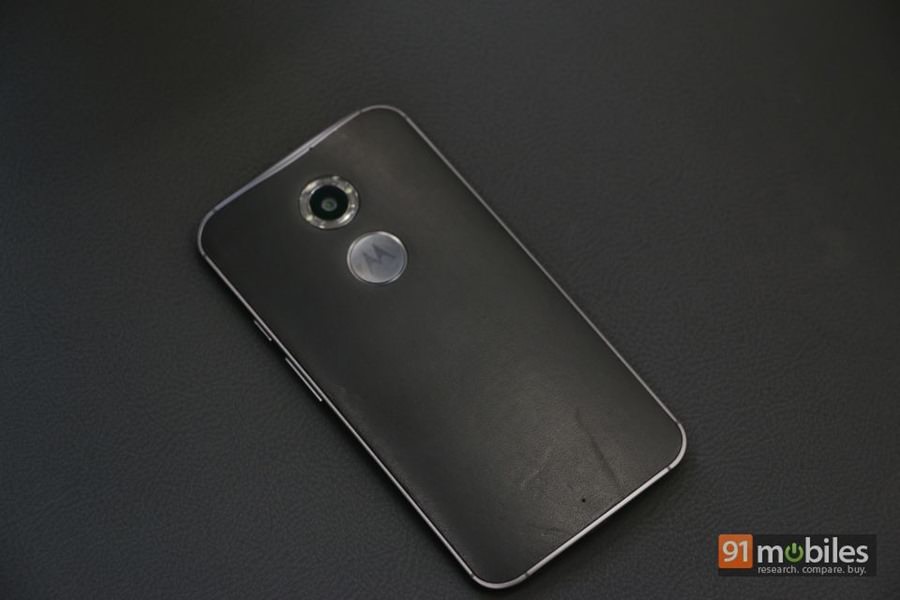 However, don’t lose hope as the new Moto X is available in classy white and black options in India. Additionally, you can opt for leather or wood finishes at the back, and these are sold at a slight premium.

How’s the build quality of the Moto X (2nd-gen)? The second-gen Moto X takes the superb handling experience offered by its predecessor to the next level. Even though it’s bigger, the phablet fits in our palms ergonomically thanks to its curved rear. Our review unit sports a leather back, which also adds to the comfortable handling. The metallic band around the edges imparts the smartphone a premium look.

Yes, the display will be able to withstand scratches and minor knocks, thanks to a layer of Gorilla Glass 3.

What kind of SIM does the smartphone support? What about 4G compatibility? 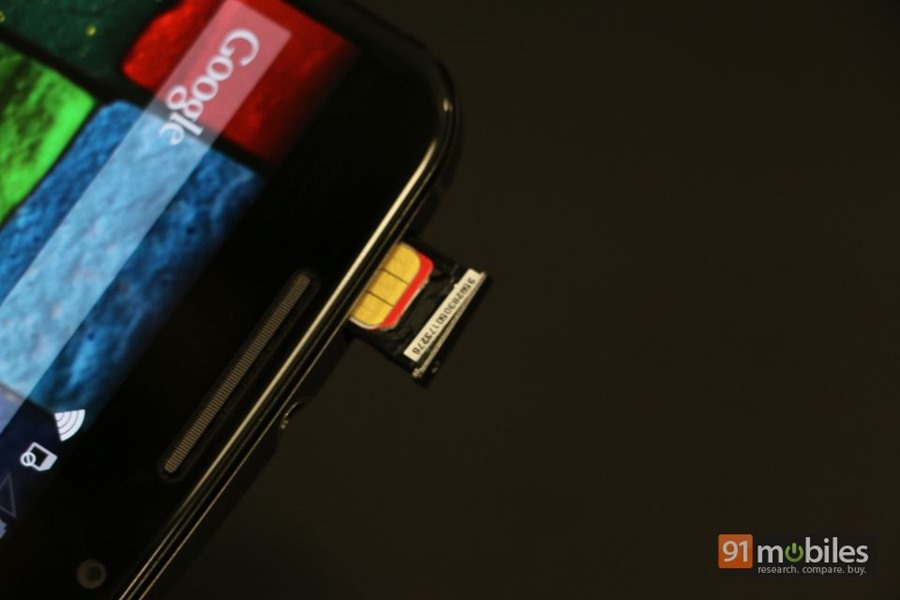 Similar to the original Moto X, its successor also accepts a nano-SIM and offers 2G and 3G support. While the device has 4G, it doesn’t support Indian 4G networks.

What other connectivity features are on board in the second-gen Moto X?

The smartphone is fully loaded in terms of connectivity, and features dual-band Wi-Fi along with support for the latest ac standard, Bluetooth 4.0 LE, NFC, DLNA and GPS.

What’s the camera like on the new Moto X? 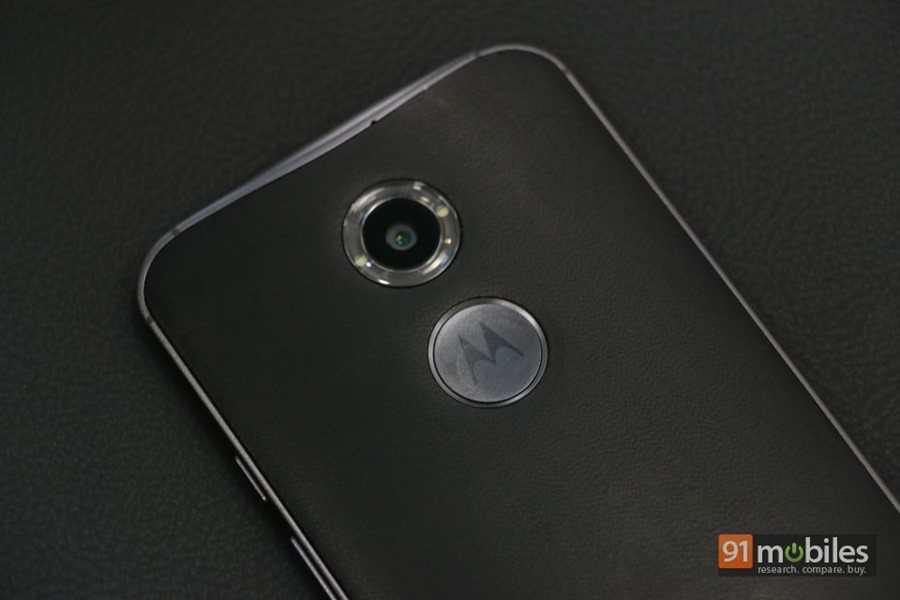 The device sports a 13-megapixel primary camera supported by a ring LED flash and a 2MP secondary camera. As mentioned in our camera review of the Moto X (2nd-gen), the smartphone captures ample detail, however the images get overpowered by blown-out highlights and hence affects colour variance.

Are there different storage variants available?

While the smartphone has two storage flavours of 16GB and 32GB, only the former is being sold in India.

How much storage is available to use? What about expandable storage and USB OTG support in the Moto X (2nd gen)? 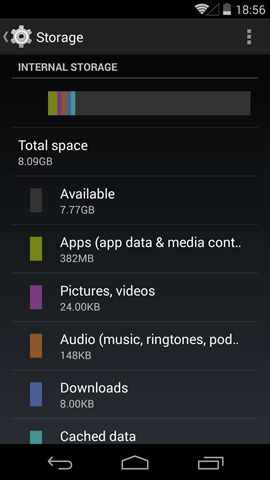 Out of the 16GB in-built memory available in the latest-gen Moto X, users will be able to access approximately 7.8GB. Sadly, the storage can’t be expanded further since the phablet lacks an expansion slot. But you can make use of the USB OTG feature to use your flash drives with it whenever you need.

What OS comes installed on the new Moto X? Are there any customisations from Motorola? 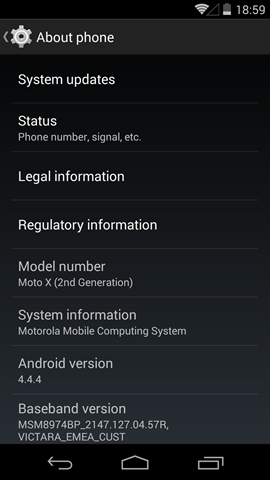 The phone gets the latest iteration of Android, which is KitKat 4.4.4. In line with its promise of vanilla Android, the device doesn’t have any bloatware, although there are some really useful apps and features.

So what kind of software features are you talking about in the Moto X (2nd gen)?

Well, as we stated in the introduction, the ability to initiate any action with your voice is one of the biggest features in the new Moto X as well. However, unlike its predecessor where all the features needed to be activated separately, the phablet merges all these features under a single app tagged simply as Moto. The app has the following four features:

Moto Voice: Motorola has rechristened the touchless control feature with this name and has made it a more personal experience by allowing you to address the device with just about any hotword and not just “Okay Google”. 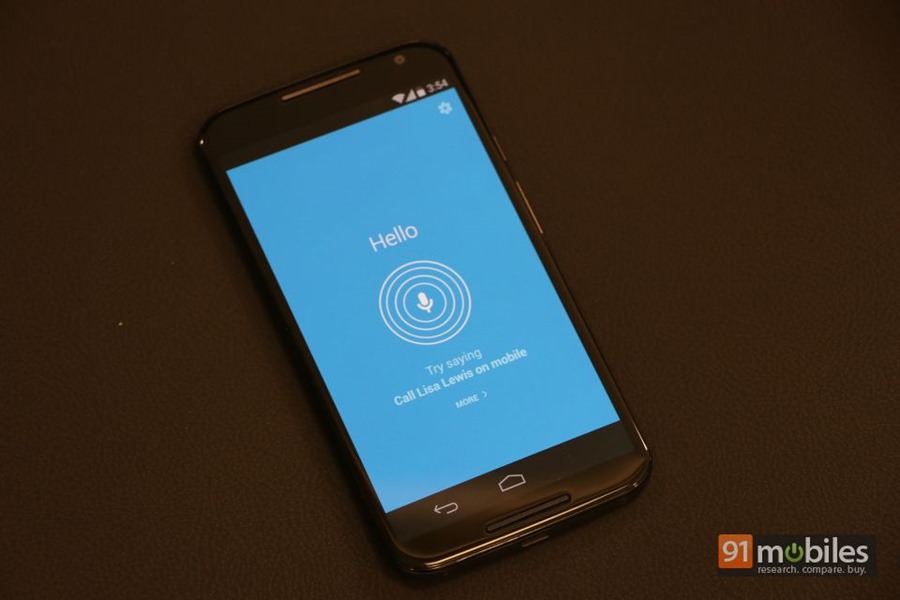 Moto Display: it’s the new name for the Active Display feature, which uses the AMOLED display’s capabilities to offer at-a-glance info about notifications on the screen. The best part about this feature is that it doesn’t impacts the battery life significantly, since only a few pixels are used to display this info and the rest of the screen isn’t used.

Moto Assist: automatically changes various settings on the smartphone based on your current situation. So if you are in a meeting, for instance, the smartphone will silence all the incoming calls and messages (of course, you can set exceptions to this rule), along with giving you the option to auto reply to missed calls.

Moto Actions: allows the user to make use of gestures to silence calls, snooze alarms, etc., thanks to the use of IR sensor at the front. With this feature, you can also have a look at the notifications through Moto Display by waving your hand in front of the device.

What’s different in the new Moto X compared to its predecessor?

The second-gen Moto X is a vastly different beast than its predecessor with upgrades in the hardware department. You can read the detailed comparison between the two here. But simply put, the new Moto X takes the impressive capabilities of the original and offers them in a fully-loaded package.

It certainly looks like an enticing package… So, how much does the Moto X (2nd-gen) cost?

Similar to all Motorola devices, the new Moto X is exclusively available on Flipkart. The plastic rear panel variant will set you back by Rs 31,999, while the ones with the wooden or leather texture backs will cost Rs 33,999 each. 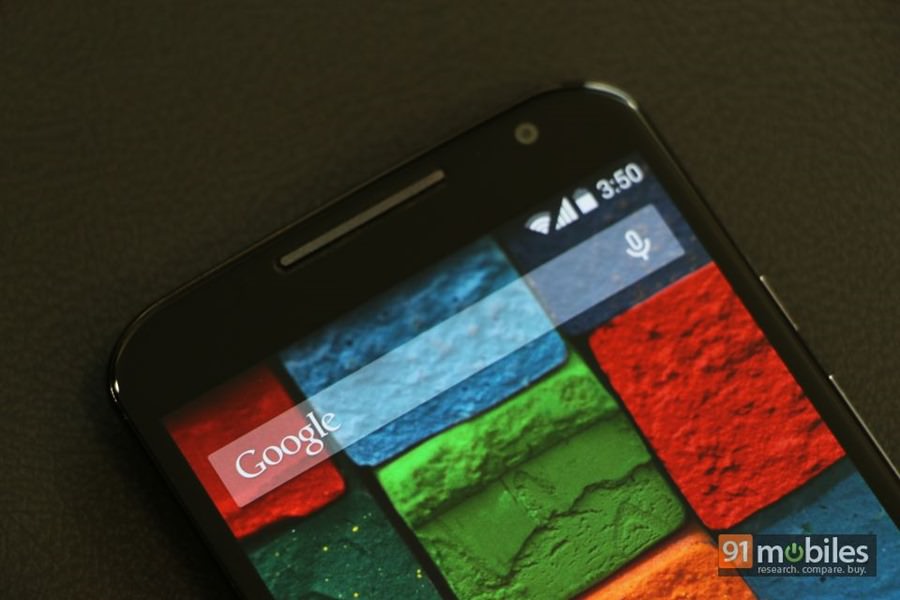 We hope we have cleared your confusions regarding the new Moto X. But if you want to know whether the smartphone is worth your money or not, then stay tuned as our review will be out soon to answer that.