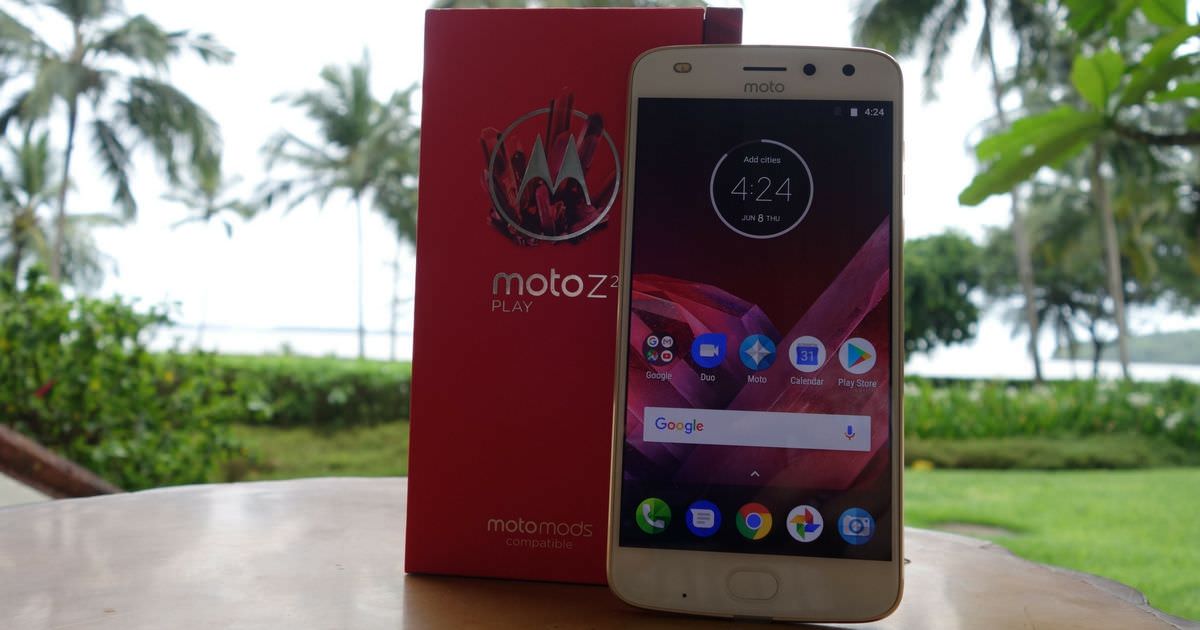 “The Moto Z2 Play is a larger version of the Moto G5 Plus, with added modular capabilities”

Last year, the Lenovo-owned Motorola ditched its Moto X series in lieu of the Z moniker, which also opted for a two-pronged approach. While the Moto Z (review) was aimed at the premium segment, the Moto Z Play (review) was a solid offering in the sub-Rs 25k bracket. The company is continuing with the strategy this year, and although the oft-rumoured Moto Z2 is yet to be announced, the Z2 Play went official earlier this month, and has now been launched in India. The Moto Z2 Play represents quite a few changes for the brand… if you look beyond the spec sheet. Read on to find out why we think so. 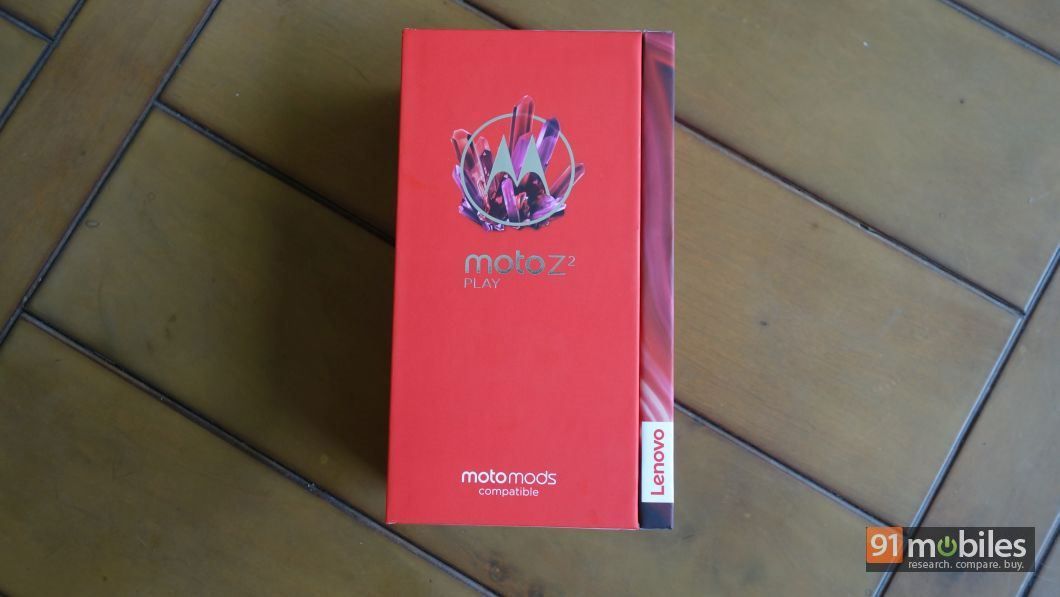 Before we talk about the device itself, let’s take a quick look at its retail packaging. Motorola has started opting for a bold stance for its smartphones, and that starts with the sales pack itself. It features a snazzy red colour with the Moto logo at the front. Sliding out the box reveals the Moto Z2 Play, which is kept in a cardboard cover hiding the SIM-ejection tool and some documentation. Below that, you’ll find a USB Type-C cable, Turbo Power adapter (promises seven hours of backup with just a 15-minute charge), and a pair of earphones. The good thing about the earphones is that they feature a tangle-free flat design, which means no more hassles of untangling them after taking them out of your pocket or bag. 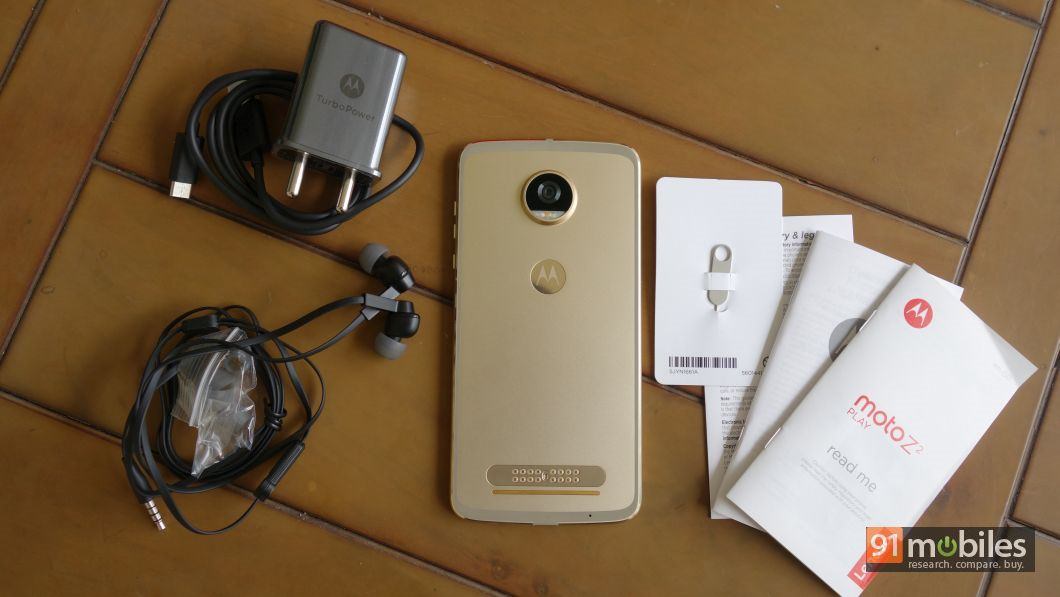 The first change that the Moto Z2 Play brings (over the Z Play) is a revamped design language. While the Z Play was lauded for its hardware and modularity, it was quite bulky. Its successor is starkly different with a frame measuring less than 6mm and a weight of 145g. Unlike the glass back panel of the Z Play, the Z2 Play sports metal, which gels well with its unibody construction. Ergonomically, the weight has been distributed extremely well, and the device feels quite light in the hand. It’s slightly wide though, which makes it difficult to reach the corners with a single hand. 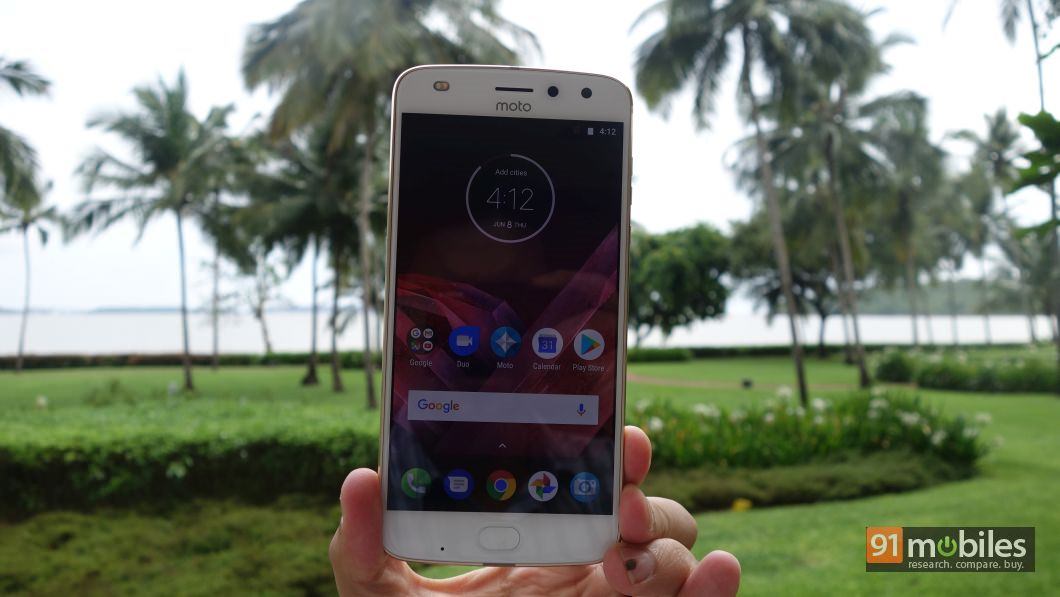 Similar to the Moto G5 Plus, the home button at the front of the Z2 Play doubles up as a fingerprint reader and can also be used for navigation via gestures. In fact, the latest from Moto looks like the G5 Plus (review), both at the front as well as the back. The phone also has a significant camera protrusion, making it wobble when kept on a flat surface.

Of course, the trump card of the Moto Z2 Play is its modular functionality (or semi-modular, if you want to be precise) as it allows accessories to be snapped to its back. The Moto Mods, as they are called, have been enhanced this time around. Along with the InstaShare projector, the JBL SoundBoost speaker mod has been upgraded to version 2, while TurboPower and GamePad mods are new. The upgraded Style Shell also adds wireless charging to the handset. The new Mods are set to arrive later though, around the month of September. 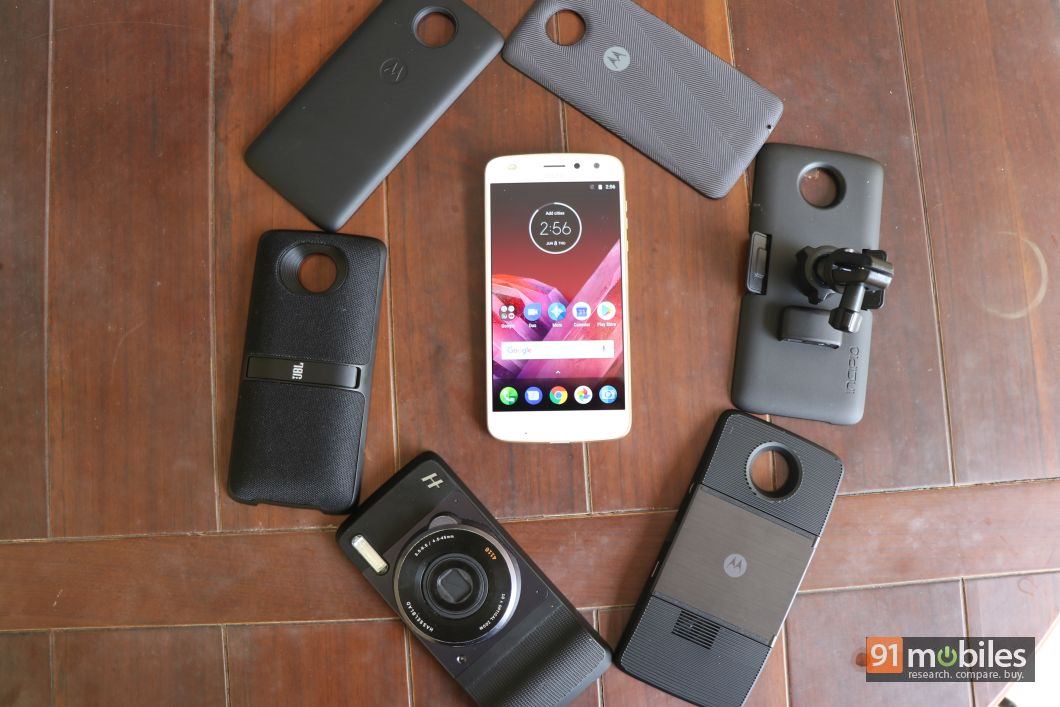 The display panel on the Moto Z2 Play measures 5.5-inches diagonally and offers full HD resolution. Thanks to Super AMOLED tech, the display offers saturated colours that are quite pleasing to the eye. The brightness levels and viewing angles are also pretty good, and we didn’t find any issues in reading the screen outdoors. A layer of Corning Gorilla Glass makes it resilient to scratches and accidental drops.

One major red flag in the first-gen Moto Z Play was its average camera quality, and the Z2 Play overcomes that by offering a 12-megapixel f/1.7 sensor – which is same as the G5 Plus. And if our experience with the latter is anything to go by, the Moto Z2 Play should be able to offer impressive images across situations. In our brief time with it, the device was able to lock the focus on subjects quickly all thanks to its dual-pixel autofocusing technology. For selfies, the phone gets a 5MP fixed-focus unit. 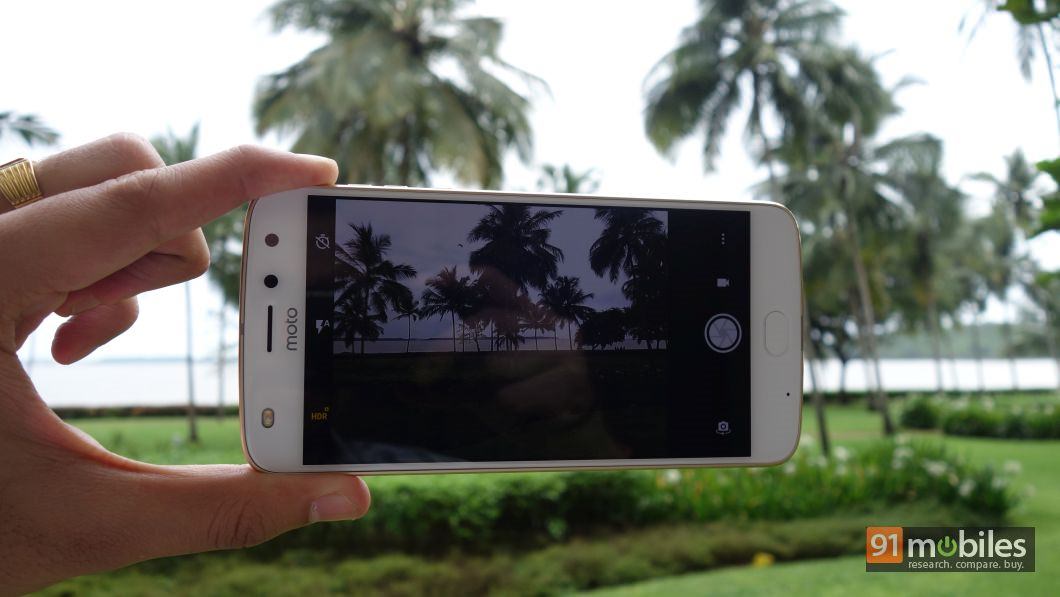 At the heart of the Moto Z2 Play ticks the Qualcomm Snapdragon 626 chipset, which offers eight Cortex-A53 cores clocked at 2.2GHz. The processor is a slight upgrade over the SD625, which fuelled its predecessor. The SoC is coupled with 4GB of RAM. We didn’t face any lags or hang-ups during our usage, and it should easily be able to handle 3D-heavy gaming titles as well. The storage needs are taken care of by 64GB of onboard memory, and you can also expand it further.

Software has always been the highlight of Moto smartphones, and the Z2 Play is no different. The phablet boots Android 7.1.1 Nougat with a stock interface and no bloatware, although there are some useful additions. The Moto Voice app has received an update, which now allows you to open any app by simply saying “Show me the <app name>”, which is quite useful. 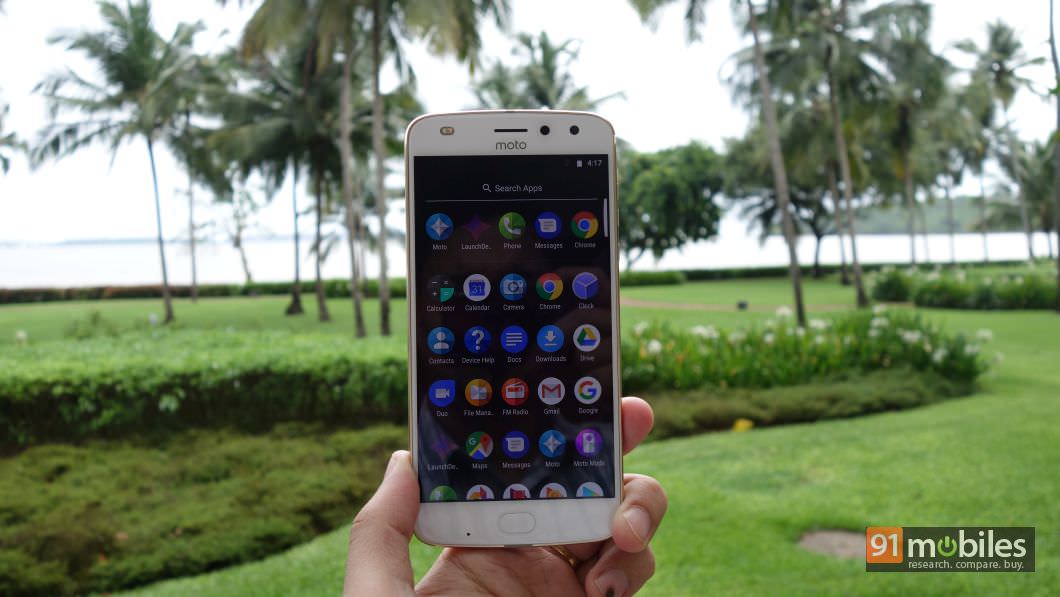 While the Moto Z Play was on the thicker side, it had one advantage – a beefy 3,510mAh battery. Sadly, by shaving off the thickness, Moto has also reduced the battery size on the Z2 Play, which is rated at standard 3,000mAh. That said, the SD626 is quite power-efficient and coupled with Moto’s optimisations, the phablet should be able to deliver a day’s worth of backup. 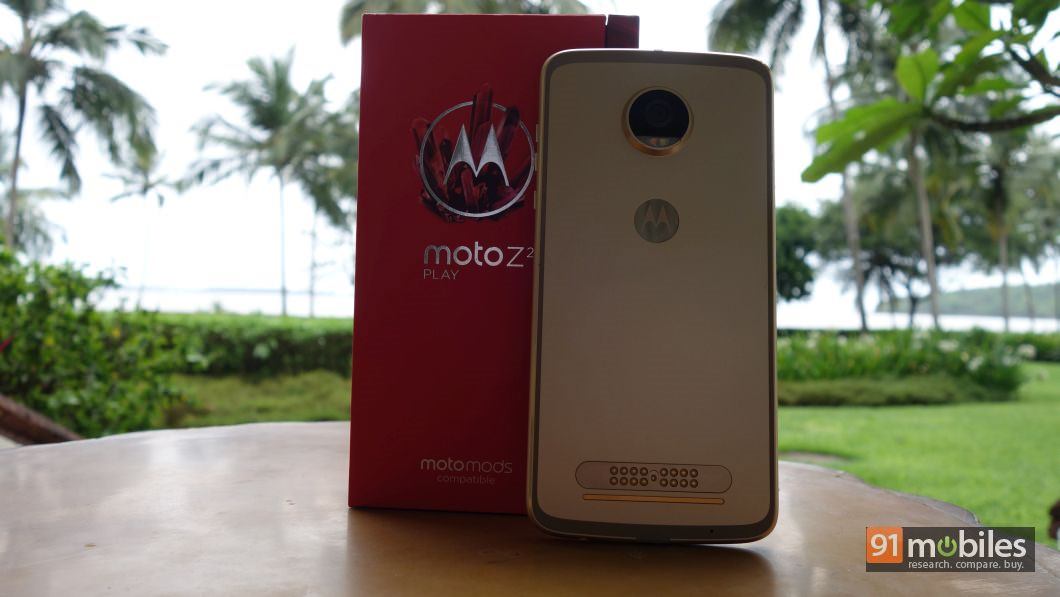 While Motorola revolutionised online-only sales in India, the brand has recently started to shift its focus offline. The Moto Z2 Play is targeted towards offline sales from the get-go – it’s already available for pre-order across retail stores. Perhaps this justifies its sticker price of Rs 27,999, even though it may not be a revolutionary update over its previous iteration. If you compare it with devices available online though, the Z2 Play faces an uphill battle. The OnePlus 3T (review) is an obvious choice in this category, but there are other devices such as the Samsung Galaxy C7 Pro (review) and OPPO F3 Plus (review). Further, if you discount the semi-modular capabilities, the Moto Z2 Play is simply a slightly larger variant of the G5 Plus. We’ll have more to say about the device and its real-life performance in our review, so stay tuned.

Disclosure: This writer attended the launch event in Goa on Moto’s invitation