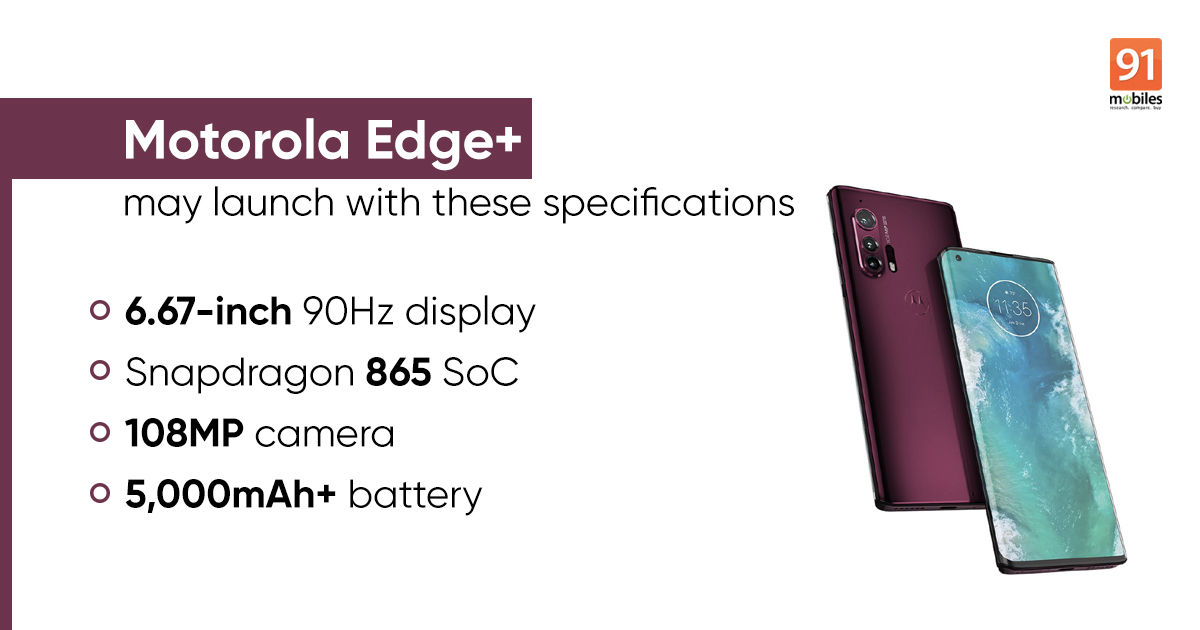 Motorola is hosting a “Flagship Launch E-vent” on April 22nd where it is expected to take the wraps off the much-awaited Motorola Edge+ smartphone. The handset was previously expected to launch at Mobile World Congress (MWC) 2020 in February, which was cancelled due to the novel coronavirus. As per the teaser shared by Motorola on Twitter, the handset may come with a curved display, much like the Vivo NEX 3 smartphone. While the specifications remain vague at the moment, rumours are rife that the Motorola Edge+ could be powered by the flagship Qualcomm Snapdragon 865 SoC. The handset may even come with an edge-to-edge display, stock-Android OS, a beefy battery cell, and primary camera with 108MP resolution.

The Motorola Edge+ specifications have been tipped to include a 6.67-inch AMOLED punch-hole display with FHD+ resolution and support for 90Hz screen refresh rate as well as an in-display fingerprint scanner. The display is likely to tout high screen-to-body ratio, thanks to the curved edges. The handset will reportedly have 2.84Ghz octa-core Snapdragon 865 SoC ticking at its core. This could be paired with up to 12GB of RAM and 256GB storage onboard. The phone may also come with 5G connectivity for high-speed internet.

For photography, the Motorola Edge+ is expected to ship with 108MP sensor. It was revealed via the alleged render of the phone, which was leaked by the popular tipster Evan Blass. As with other Motorola phones, the Edge+ could also run stock-Android out of the box. A beefy 5,000mAh+ battery may fuel the handset.

In addition to the Motorola Edge+, Motorola is also rumoured to be working on vanilla Edge smartphone. The handset, unlike its flagship counterpart, is said to feature a Snapdragon 765 CPU, 6GB of RAM, and 4,500mAh battery. The Motorola Edge is also expected to sport a 6.67-inch display with curved edges, in-display fingerprint scanner, and punch-hole atop. In optics, the phone could sport triple rear cameras with 64MP + 16MP + 8MP sensors.