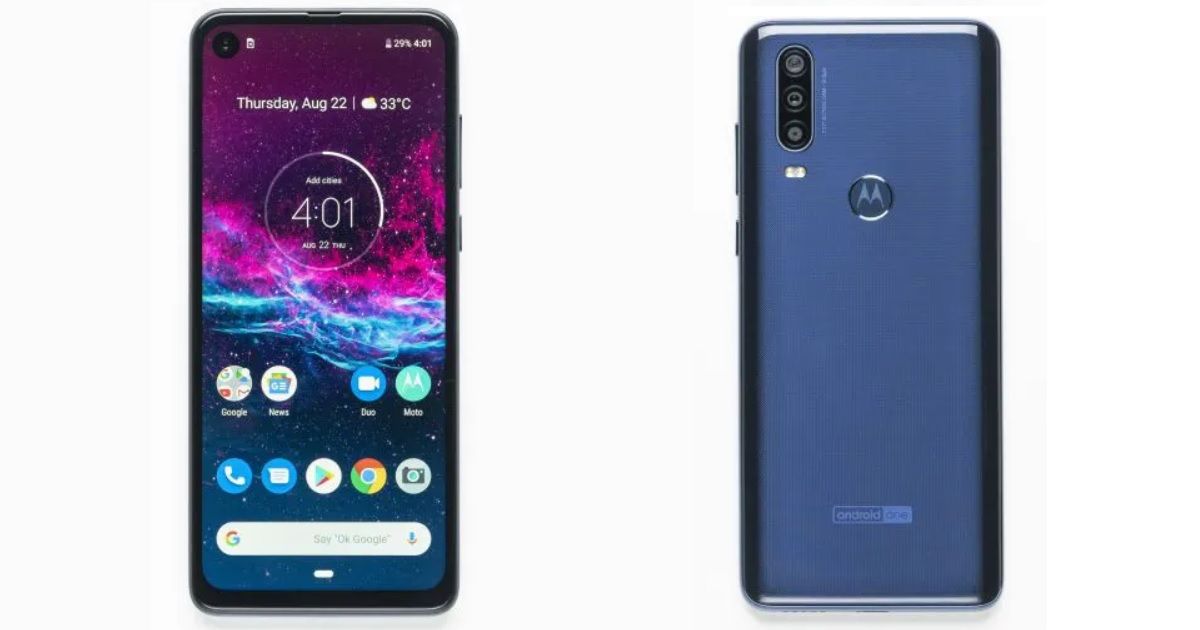 Home Bottom panel Motorola One Action unboxing and first impressions: it’s all about the action...

Motorola One Action India launch finally took place in the country today. The phone joins the One series and is the brand’s second handset after the One Vision (review) that comes with a punch-hole display. As its name suggests, the One Action’s biggest highlight is its “Action Camera”, which aims to take on the likes of the GoPro and other action cams on the market. The phone will go on sale in India on August 30th, but before that we’ve got it in our labs to bring you our unboxing and first impressions of the Motorola One Action.

Inside the retail box of the Motorola One Action, the company has packed a TPU cover case, apart from the phone itself. Other than that, you’ll find the usual things like a wall charger, a USB Type-C charging cable, a SIM-ejector tool, and some documentation. Sadly, the brand hasn’t offered a pair of earphones for the handset.

Coming to the smartphone, the Motorola One Action as been constructed out of polycarbonate. However, the phone does look quite premium thanks to a glossy finish at the back. The rear also houses vertically-aligned triple rear cameras, a fingerprint sensor hidden under the Moto dimple, and the Android One branding. The smartphone has a curved back and rounded corners which help in ergonomics. The USB Type-C port and a speaker grille is placed on the bottom edge, whereas the 3.5mm headphone socket is available up top. The volume rocker and power button can be found on the right spine, while the SIM card tray is towards the left.

The Motorola One Action packs a 6.3-inch CinemaVision full HD+ display. Similar to the One Vision, the brand’s latest has a taller-than-usual aspect ratio of 21:9, which provides an immersive media viewing experience. The punch-hole in the display is placed on the top-left corner, which is slightly bigger than what we’ve seen on the other handsets. The punch-hole is a bit distracting while viewing videos, but the wide-screen does make the experience of watching multimedia more enjoyable. It’s worth mentioning that the One Action has Widevine L1 certificate, which lets you play HD videos from streaming services.

Software-wise, the Motorola One Action boots stock version of Android 9 Pie out of the box. As it’s an Android One offering, the handset will be getting guaranteed software updates for at least two upcoming generations of Android, including the Android 10 and R. The smartphone also comes with features like Google Assistant and Digital Wellbeing. Under the hood, the One Action features the Samsung Exynos 9609 processor, which offers a clock speed of 2.2GHz. The smartphone comes with 4GB of RAM and 128GB of storage, and it supports microSD cards up to 512GB in size. During the brief time I spent with the phone, it operated normally without any lag. PUBG lovers will love the fact that the device can play it on HDR settings.

Coming to the cameras, the Motorola One Action’s dedicated action video camera has a 16MP sensor. This features an ultra-wide field-of-view of 117-degree, Quad-Pixel technology, and an aperture of f/2.2. This camera offers video stabilisation so your footage is stable even while you are moving like skating or something. Notably, the One Action is the first phone in the world that lets you record horizontal videos even when you are holding it vertically. The few clips I captured from the phone were quite stable. The other two camera sensors include a 12MP main shooter and a 5MP depth shooter.

As for the connectivity options, the One Action has dual-SIM slots, 4G LTE, dual-band Wi-Fi, and Bluetooth 5.0. The device is powered by a 3,500mAh battery, which supports 10W fast charging technology. Lastly, the handset offers IPX2 certification for dust and water resistance.

The Motorola One Action price in India is set at Rs 13,999. For the price, it offers compelling camera specs and a tall CinemaView display along with decent hardware. However, it competes against the heavyweights such as the Realme 5 Pro, Redmi Note 7 Pro and Vivo Z1 Pro. If you’re wondering the One Action should be your next buy or not, then stay tuned as our review will be out soon.