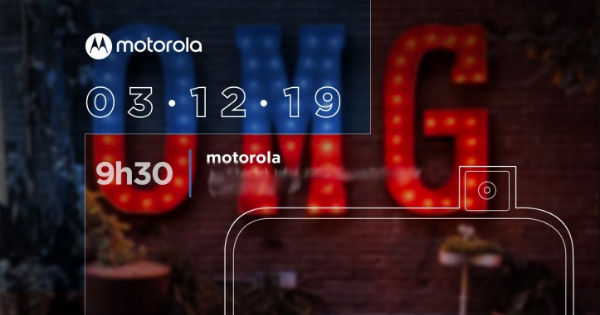 “Motorola One Hyper launch date is set for December 3rd and it will be the company’s first pop-up selfie camera phone.”

Motorola One Hyper is the next smartphone from the company in the One-series and is set to launch in Brazil on December 3rd. A new teaser poster has been spotted that confirms the Motorola One Hyper launch date and also confirms that the phone will come with a pop-up selfie camera. Live images of the Motorola One Hyper leaked out last month, revealing the phone’s pop-up camera and rear-mounted fingerprint sensor. Earlier this month, the handset bagged the FCC certification which revealed a 4,000mAh battery, and was also certified by Thailand’s NBTC regulatory authority.

Motorola One Hyper is rumoured to be the brand’s first phone to house a 64MP primary sensor aided by an 8MP depth sensor for portrait shots. Other rumoured One Hyper specifications include a 6.39-inch full HD+ IPS LCD display with slim bezels, Snapdragon 675 SoC coupled with 4GB RAM and 128GB internal storage that might be expandable. It is likely to run on Android 10 with a near-stock interface on top.

The Motorola One Hyper’s rear camera is said to record 4K videos at 30fps and full HD slow-motion recording. There is a rear-mounted fingerprint sensor for security, and it will have a 3.5mm audio jack. Since everything is based on rumours and reports, we suggest you take it with a pinch of salt and wait for the official announcement, which is just under a week from now.