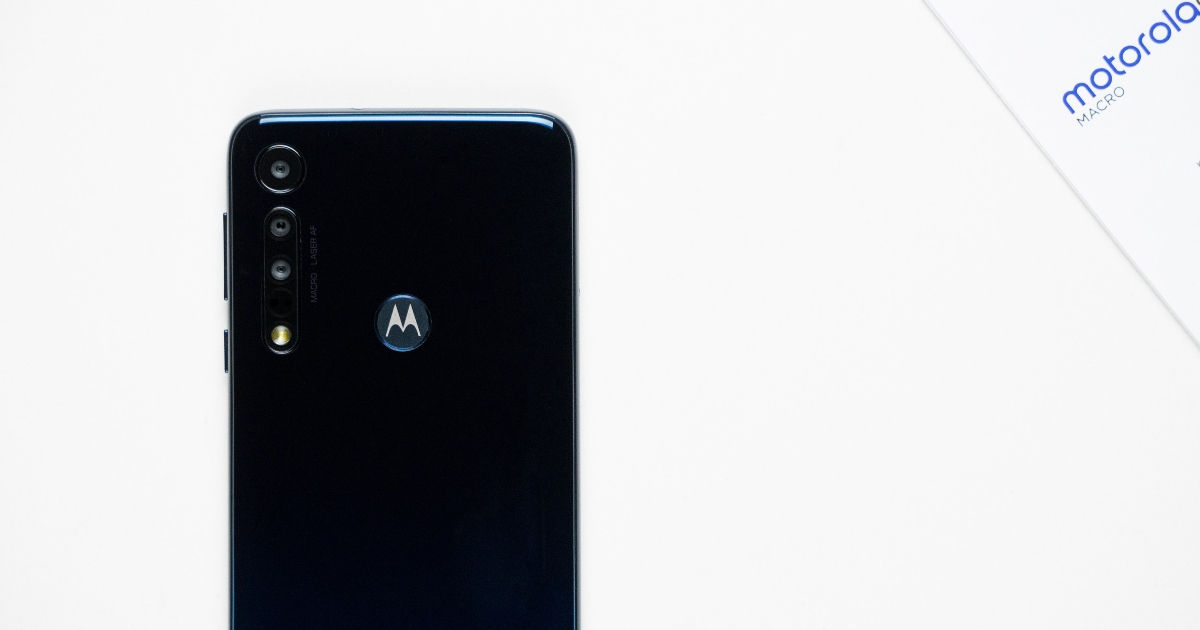 “The Motorola One Macro sports a triple-camera setup on the rear, with one of the sensors offering macro photography capabilities”

Lenovo-owned Motorola is expanding its lineup of One-branded smartphones rather quickly. After the One Vision (review), One Action (review), and One Zoom (first impressions), the brand has added the fourth member in the series dubbed One Macro. As with all the phones in the range, there’s a focus on a particular feature and this time around, it’s macro photography. The Motorola One Macro has landed in our labs, making it a perfect candidate for taking it through the unboxing and hands-on treatment. So without wasting any more time, let’s get right into it… 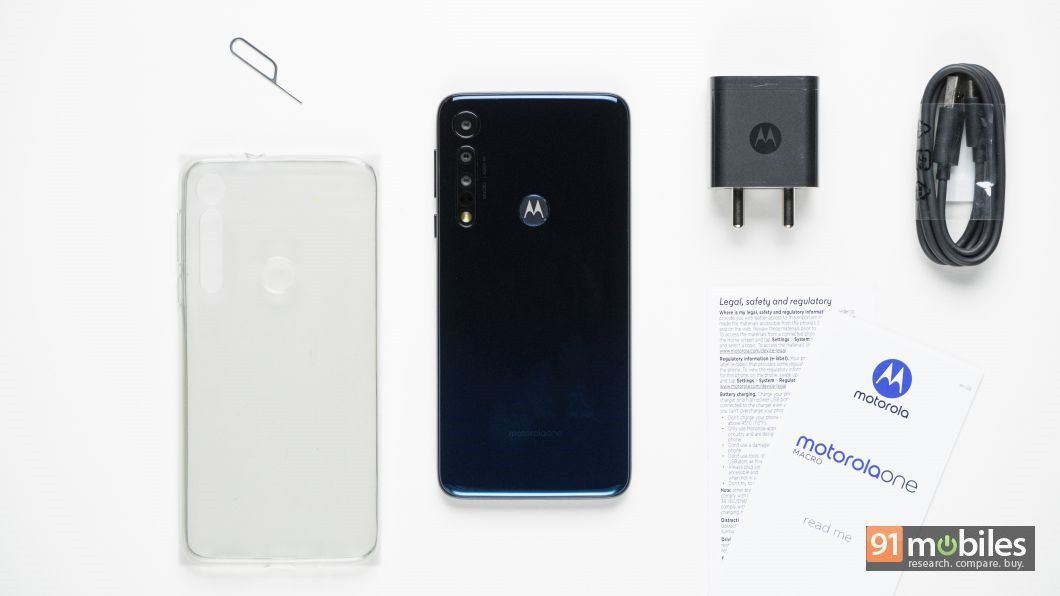 The One Macro comes packed in a rectangular box, not much different from the company’s previous offerings. The retail pack simply has the phone’s name up top and key specs listed at the back, and as soon as you open it, you are greeted by the handset. What I found interesting was the fact that the device comes encased in a protective cover. Underneath that, you’ll get some documentation and SIM-ejection tool. Rounding off contents is the 10W power brick and a USB Type-C cable. 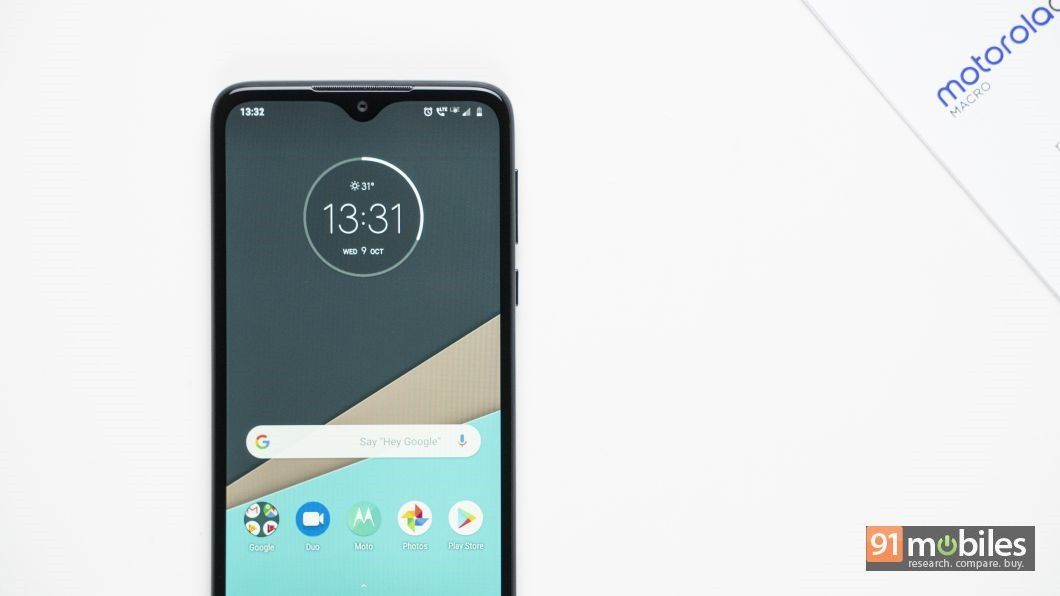 Starting with the calling card of Motorola’s One Macro, the handset features a trio of cameras on the back. The primary 13-megapixel PDAF-equipped shooter is accompanied by a 2MP depth snapper. But it’s the 2MP macro sensor that we’re most interested in, since such lenses are quite rare in this segment. To jog your memory, the Realme 5 (review) and Realme 5 Pro (review) also ship with macro sensors. Along with PDAF, the device also has laser autofocus for helping you lock the focus on the subject quickly. In our initial tests, the camera did seem to impress us with macro shots giving some creative opportunities to shoot objects from close quarters (as close as 2cm).

From the front, the One Macro is different from its siblings. Instead of bearing a punch hole on one of the corners, the phone features a waterdrop notch atop its 6.22-inch display. The IPS screen bears a resolution of 720 x 1,520 pixels and offers good levels of sharpness (unless you start pixel peeping) and vibrant colours. The cut-out houses an 8MP shooter with f/2.2 aperture for selfies. In terms of the design, the phone follows the conventional placement of buttons and ports, though I did like the texture on the power switch that makes it easier to identify. Available in Space Blue colour, the One Macro does seem quite appealing. Sadly though, the rear cover is glossy, which means that it’s slippery and attracts fingerprints like a moth to a flame. Which is why, you should use the protective cover to avoid the same. The handset also sports a water-repellent coating and comes with IPX2 certification.

Motorola One Macro design gallery
1 of 4

Inside the Motorola One Macro ticks the MediaTek Helio P70 SoC, which is paired with 4GB of RAM. It’s a tried-and-tested combination and ensures smooth performance in basic navigation and multitasking. Gaming should also be a delightful affair, though we didn’t try that during our time with the smartphone. For storage needs, the One Macro ships with 64GB of expandable storage. 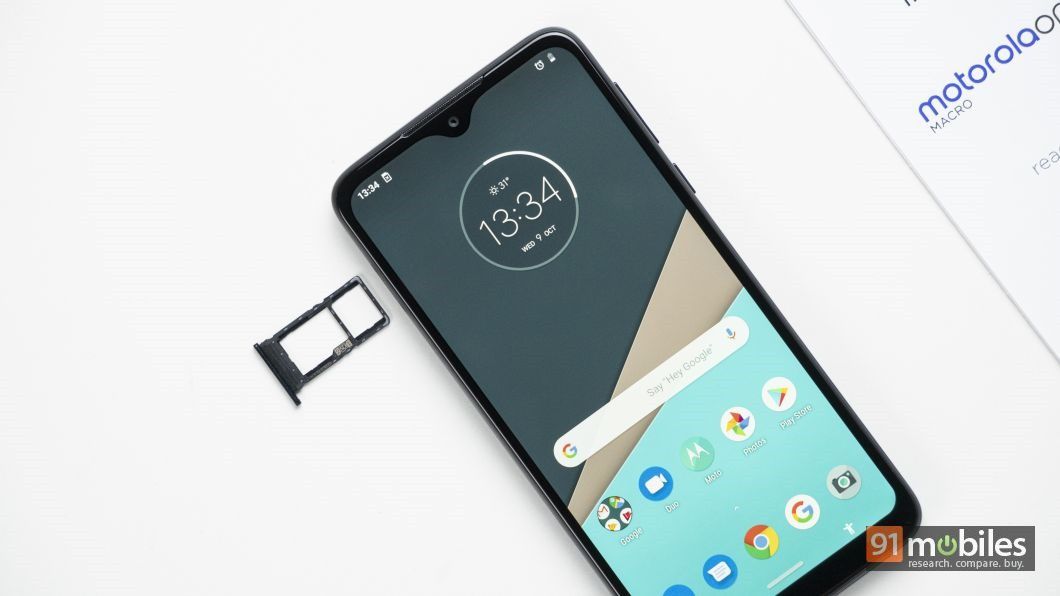 Fuelling the One Macro is a 4,000mAh cell that should ensure that you don’t need to juice up in the middle of the day. Interestingly, even though it’s a One series phone, it doesn’t come with Android One, just like the One Zoom. Despite that, you do get stock Android interface with v9.0 Pie and Motorola’s signature apps preinstalled. 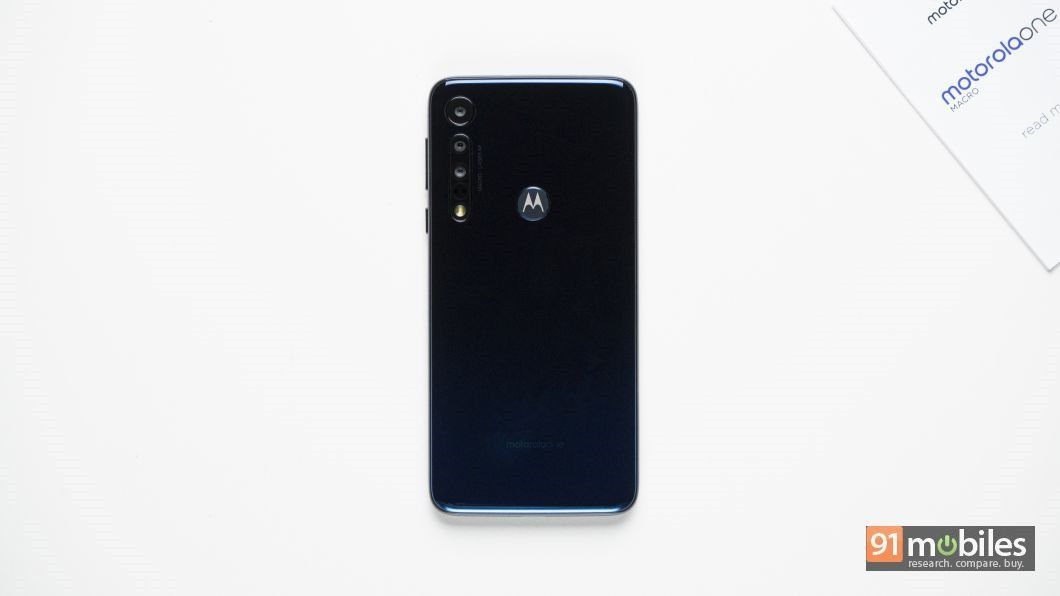 The Motorola One Macro price in India is set at Rs 9,999, and it’ll be available to buy off Flipkart. At this price, the handset goes up directly against the Realme 5, and comes across as a solid offering. We’ll be putting it through its paces soon to see how it stacks up in the real-life, so stay tuned for our review.