91mobiles.com
Home Bottom panel Motorola One Vision unboxing and first impressions: eyeing a slot in the... 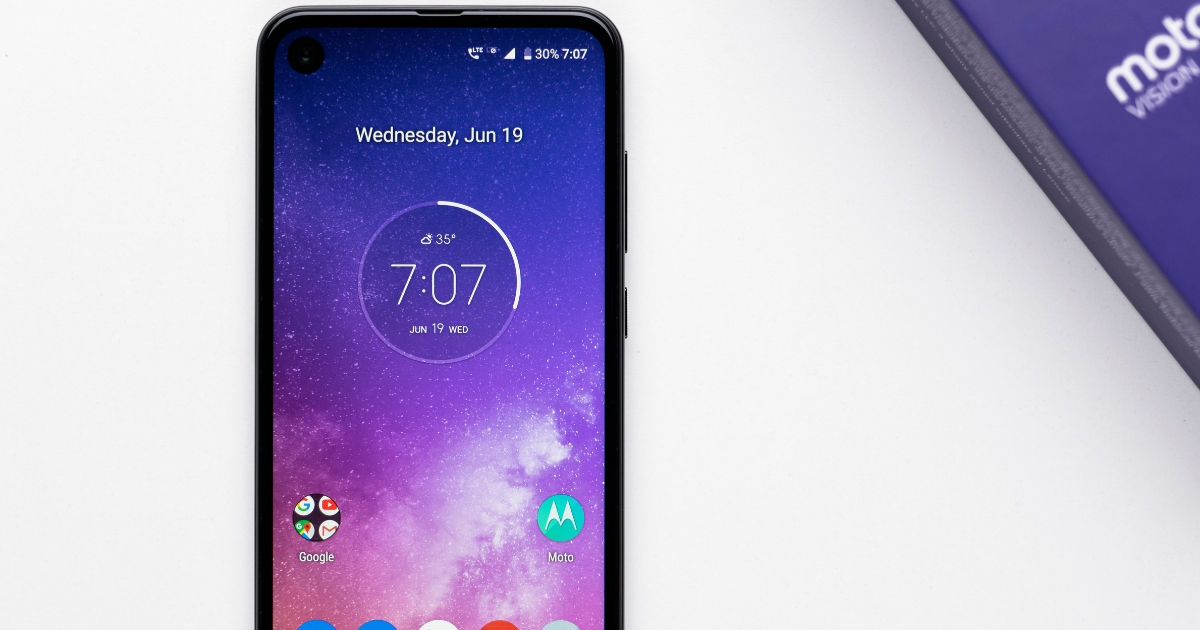 “The One Vision marks many firsts for the brand – a 21:9 display, Exynos chipset and a high-res 48MP cameras. We go hands on”

There’s little doubt that the G series (and the more affordable E range) helped put Motorola back on the smartphone map, both globally and in India as well. But over the last couple of years, the brand hasn’t been able to find its footing against the increased competition – both in the online and offline segment. Yet, last year’s Motorola One Power (review) did manage to stand out amidst the competition, all thanks to a combination of powerful specs and a sizeable 5,000mAh battery. And after the lukewarm response received by the Moto G7, the company is aiming to find success with the One Power’s successor – the One Vision. And the device does seem be come prepared for serious battle by offering the latest trends. Punch-hole display? Check. 48MP rear camera? Check. So can the One Vision take the fight to the likes of the Samsung Galaxy M40 (first impressions) and Redmi Note 7 Pro (review)? Well, our review is in the works as we write this, but till then, here’s a sneak peek at what Motorola’s One Vision brings to the table. 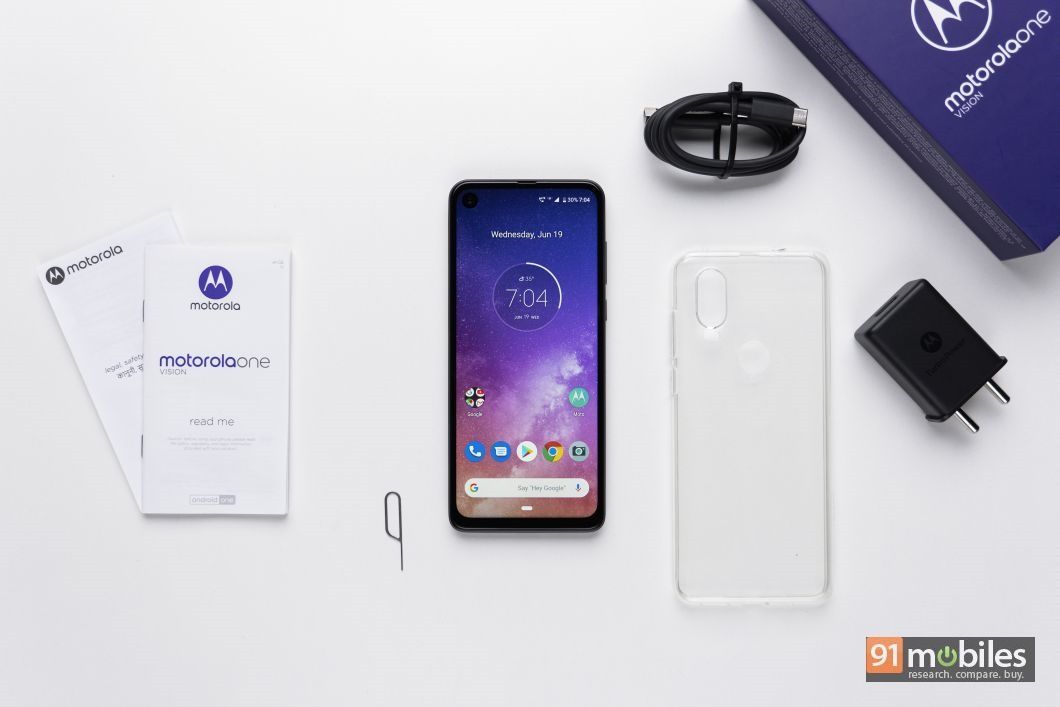 In terms of the retail box, the One Vision comes in a rectangular box. As soon as you open it, you are greeted by the smartphone. Underneath that, you’ll find a transparent case, a couple of documentation and a SIM-ejector tool. Lastly, there’s a two-pin wall adapter and a Type-C charging cable. Like most budget handsets, you won’t get any earphones.

Coming back to the One vision, let’s start with the biggest highlight – the punch-hole – it immediately grabs your attention (not necessarily in a good way). Placed in the top-left corner, the cut-out has a thick black border around it, making it look larger than the ones on the likes of the S10 series and Honor 20 siblings. Additionally, even with the use of such a mechanism, the handset seems to have thick bezels all around, and especially below the display. Another calling card of Motorola’s latest is its ultra-wide 21:9 screen aspect ratio – the first in India – ensuring that you get more content while browsing the internet or scrolling through your Facebook feed. 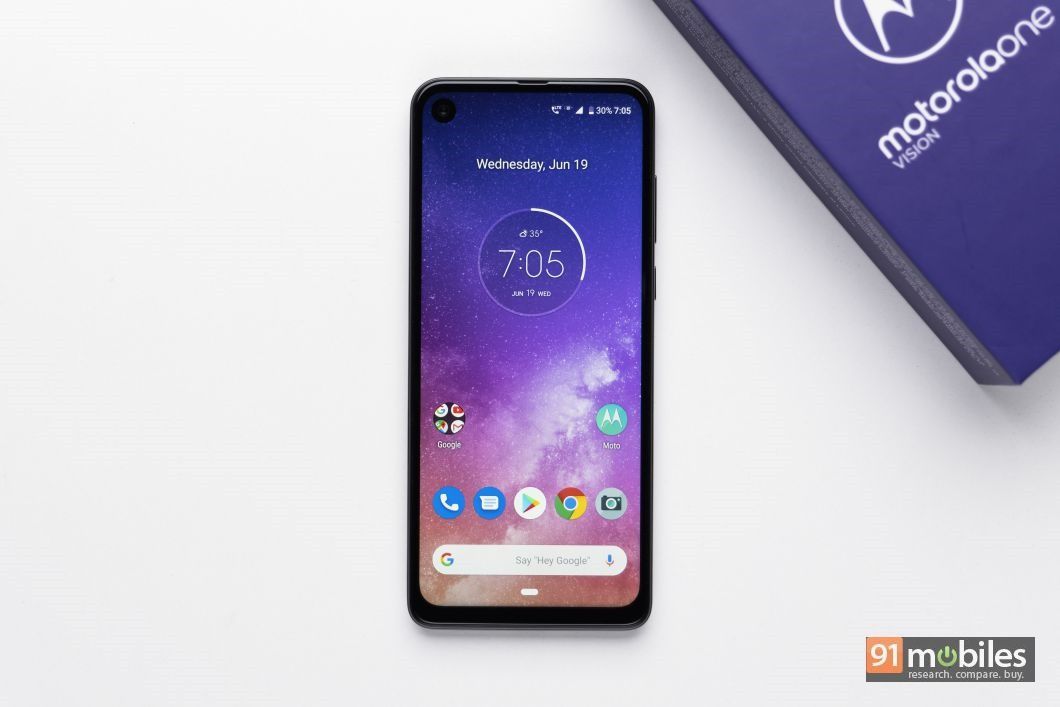 But whether it’s actually useful to consume content or not is something we’ll be touching upon in our review. What I can tell you however, is the fact that even with a 6.3-inch panel, the smartphone is quite ergonomic, and you can reach the corners single-handedly. Coming to the screen quality, the IPS panel doesn’t leave much to be desired with punchy colours and crisp text thanks to a resolution of 1,080 x 2,520 pixels.

Motorola One Vision design gallery
1 of 4

While the button and port placement is nothing out of ordinary, it’s when you flip to the back and you notice that the One Vision has borrowed design cues from the latest flagships. The glass finish at the back offers a gradient finish, making the device look quite appealing. Here you’ll find a pair of vertically-arranged dual shooters accompanied by an LED flash. Towards the middle, there’s the signature Motorola insignia which also doubles up as a fingerprint scanner. The bronze unit we received is quite eye-catching and distinct from other finishes we’ve come across, though you can also go for the blue colourway. 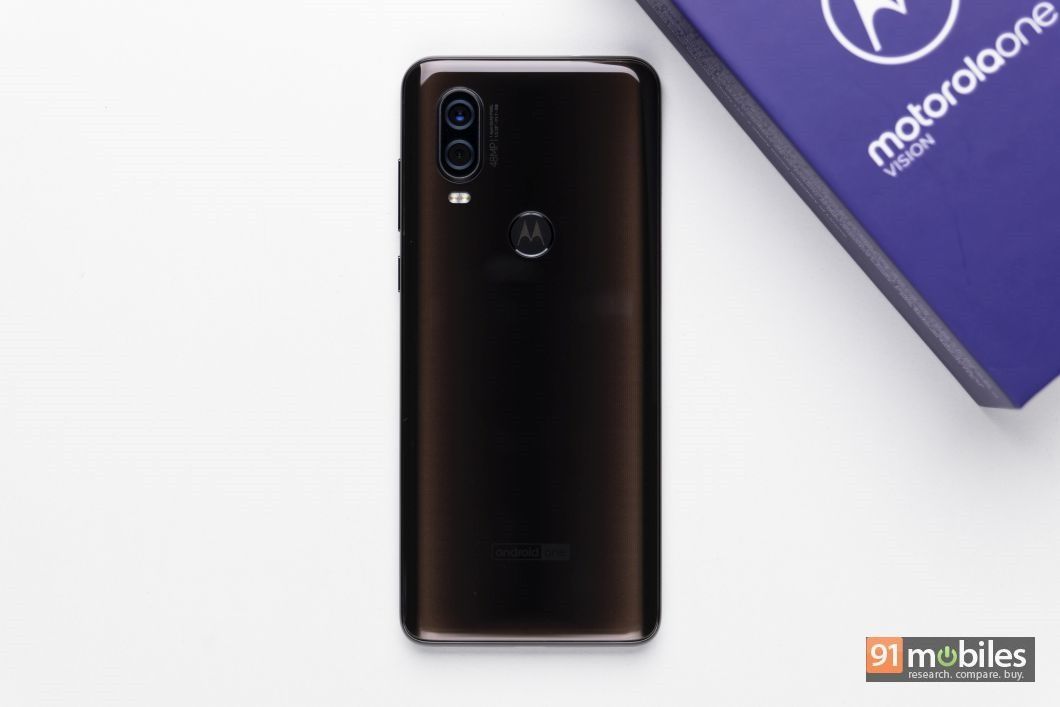 Overall, with such a design language, the Motorola One Vision strays far from its budget roots. That said, the glass-back construction means that the phone is quite slippery and catches fingerprints rather easily too.

Apart from the outards, the One Vision also has a notable change inside. For the very first time, Motorola has opted for a chipset from Samsung. The Exynos 9609 beats at the heart of the device, which comes with two quad-core clusters following big.LITTLE architecture. The SoC works in tandem with 4 gigs of RAM to ensure smooth performance, though it remains to be seen how this combination measures against Qualcomm’s Snapdragon 675 and 710 chips, which are also available in this price category.

Considering the multimedia-centric positioning of the One Vision, it’s no surprise to see the handset offering a beefy 128GB storage onboard. And in case that doesn’t feel enough, you can extend it by another 1TB with the use of a microSD card. 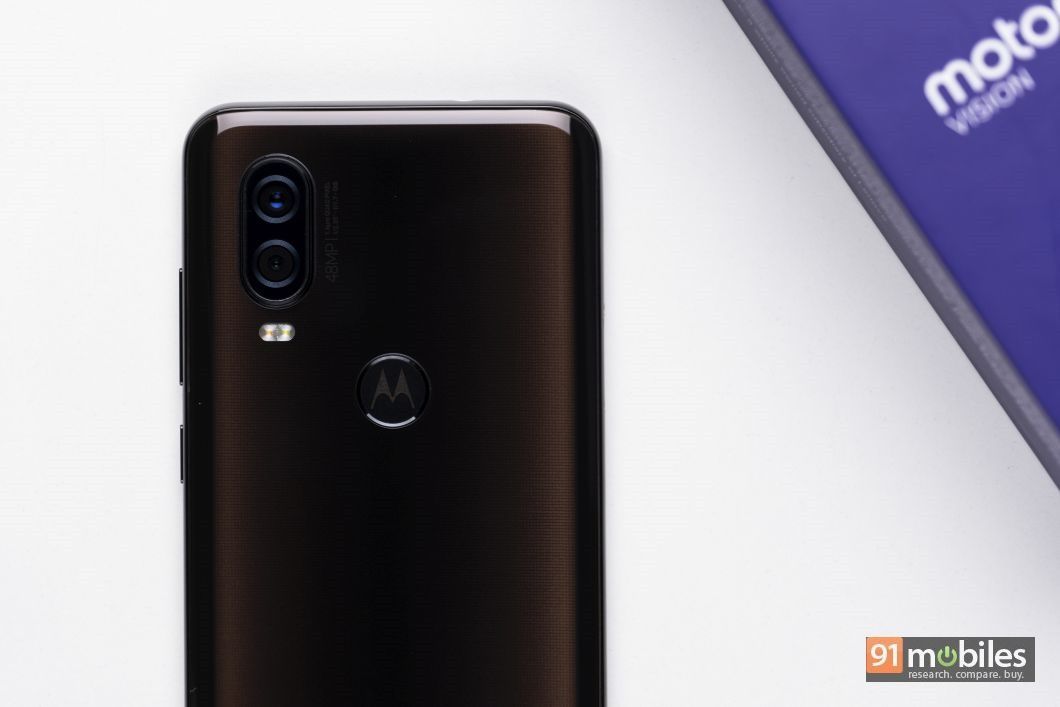 For imaging, the Motorola One Vision boasts an optically-stabilised 48-megapixel Samsung GM1 sensor with an aperture of f/1.7, which is paired with a 5-megapixel depth unit. Taking care of your selfie needs is a high-res 25MP snapper. Motorola is positioning its newest offering with the tagline of “Own the night” to highlight its low-light capabilities. Along with making use of the pixel-binning tech, the device also comes with a dedicated night mode to output good images in dim settings. Interestingly, the front camera also comes with quad-pixel tech to ensure well-detailed selfies in low light. We’ll have more to say about the imaging capabilities in the review, so stay tuned. 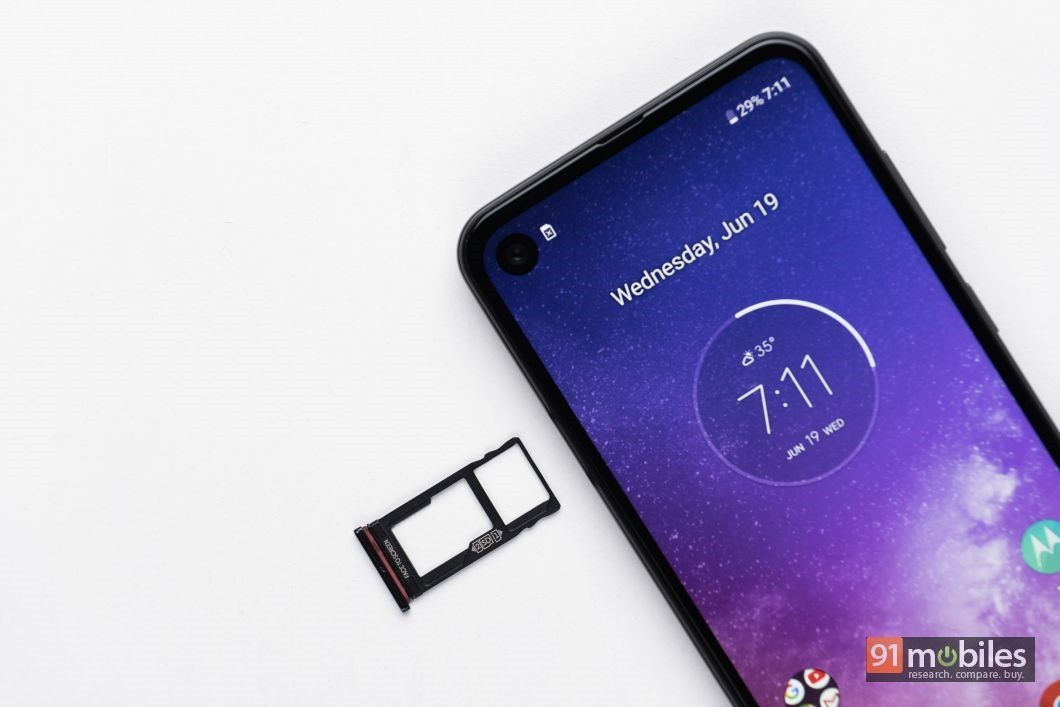 While the One Vision is a step up over the One Power in almost all departments, it doesn’t do that with respect to the battery. A 3,500mAh battery fuels the device, which doesn’t seem to be capable enough to compete with phones that come with 4,000mAh or even 5,000mAh cells. The phone does come with TurboCharge support, which the company claims can make the device last up to seven hours after charging it for just 15 minutes. As far as the software is concerned, the Motorola phone boots the latest Android 9.0 Pie in its stock avatar as it’s part of the Android One program. As with all devices from the phonemaker’s stables, the device comes with Motorola features such as Moto Actions and Moto Display. 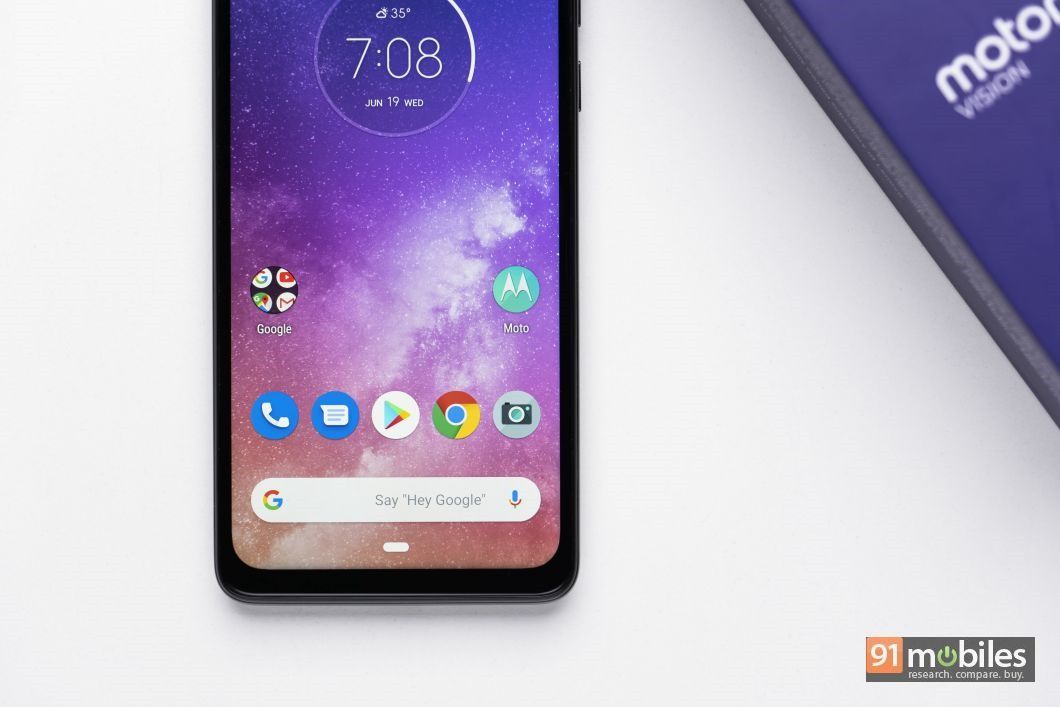 With a price tag of Rs 19,999, the Motorola One Vision comes across as a loaded smartphone, though it doesn’t have it easy considering it’s contending with some impressive rivals. There’s the Redmi Note 7 Pro, which brings a better 48MP sensor (IMX586) and more powerful internals, or the Galaxy M40, which comes with triple cameras on its back and offers better core specs. We’re putting the Motorola One Vision through its paces to see whether it should be your next buy, so stay tuned.