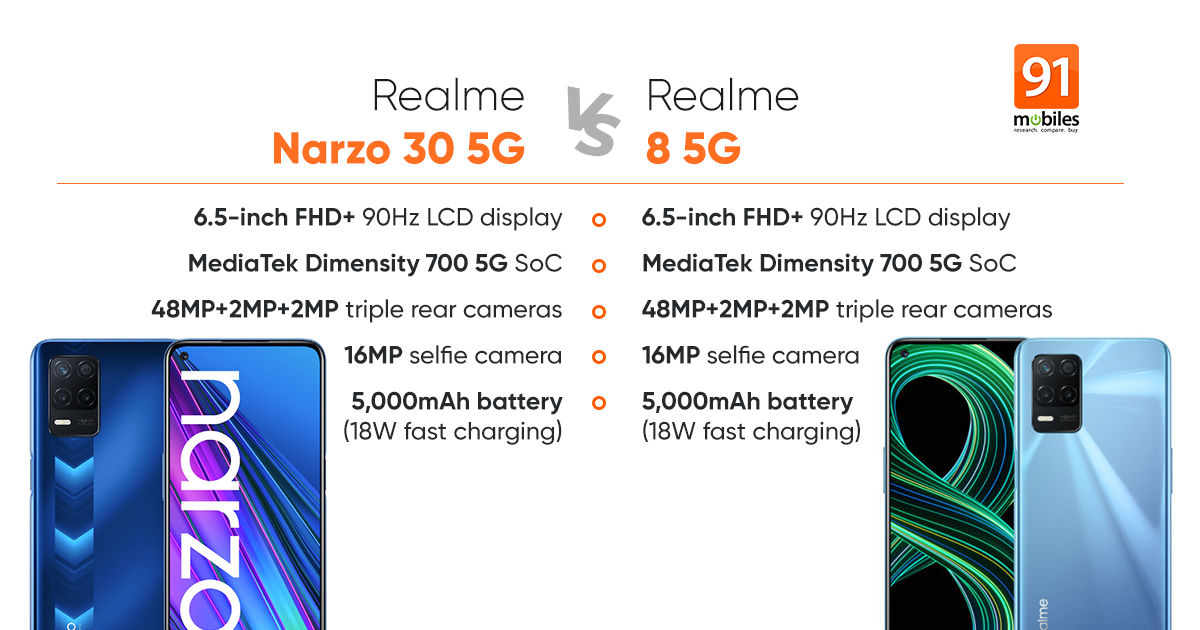 Realme recently released the new Narzo 30 series in India, which includes the standard Narzo 30 4G and the more capable Narzo 30 5G. The major difference between the two variants is in the chipset. However, the phone shares its full spec sheet with another Realme smartphone, the Realme 8 5G. If you’ve noticed the similarities and are wondering why Realme launched two different phones with the same hardware specifications, then this comparison may help you. So, let’s get started with the comparison between Narzo 30 5G specifications, prices in India, and design with those of Realme 8 5G.

It seems like the new Realme Narzo 30 5G is simply another RAM variant of the Realme 8 5G. However, according to Realme, the new Narzo series is more performance-focussed, whereas the Realme 8 series is aimed at the youth. Honestly, we don’t see the difference, and we’ll explain why below.

While there are no differences between the two phones internally, the story is different on the outside. The Realme Narzo 30 5G has a distinguishable rear panel with a stripe running down the camera module, and the Narzo branding. Meanwhile, the Realme 8 5G has a simple glossy rear panel with the Realme logo. This is about the only way you can tell the difference between the two phones.

The camera modules on both phones are identical. The phones have a side-mounted fingerprint scanner on the right side, which also doubles as the power button. The left side features the volume buttons and the SIM/microSD card tray. At the bottom, you get a USB Type-C port, a 3.5mm headphone jack, and a single speaker. Apart from the rear design, there’s no other way to tell these two phones apart.

Moving around to the front, both devices feature a hole-punch display with a cutout on the top left corner, and a noticeable chin. The Narzo 30 5G and the Realme 8 5G come with a 6.5-inch FHD+ LCD IPS display that offers 90Hz refresh rate and up to 600 nits of brightness.

The story is the same in the camera department, with both devices featuring identical camera modules and sensors. You get a primary 48-megapixel primary rear camera, which is paired with dual 2-megapixel sensors for monochrome and macro features. On the front, the phones get a 16-megapixel camera for video calling and selfies. Both devices also pack a 5,000mAh battery that offers 18W fast charging support.

To be honest, the main difference between the Realme 8 5G and the Narzo 30 5G is just that the latter starts with 6GB RAM instead of 4GB. Most people would likely just get the Realme 8 5G, since it starts at a lower price point, and also provides a higher 8GB RAM option as opposed to the Narzo 30 5G. There seems to be no real advantage of purchasing the new Realme Narzo 30 5G unless you specifically want the 6GB RAM/128GB variant and a slightly different design at the back.