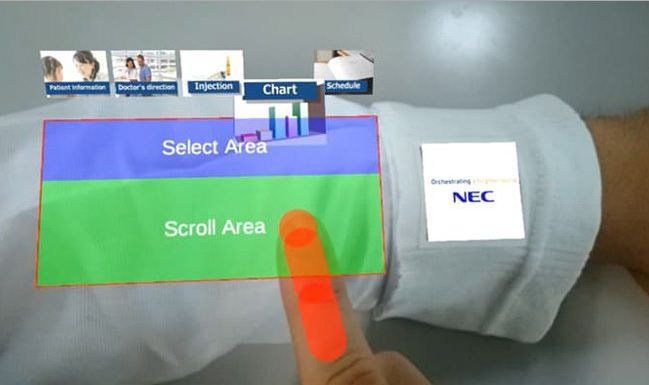 User interfaces are leaving the thresholds of screens, as is evident by the plethora of AR and VR based devices (such as Blippar and HoloLens) and applications (we’re looking at Ingress and Pokémon Go) out there. The latest development in the ‘no-screen-interaction’ category comes from Japan based NEC, whose ARmKeypad Air uses smart glasses and augmented reality to convert your arm into a keyboard. 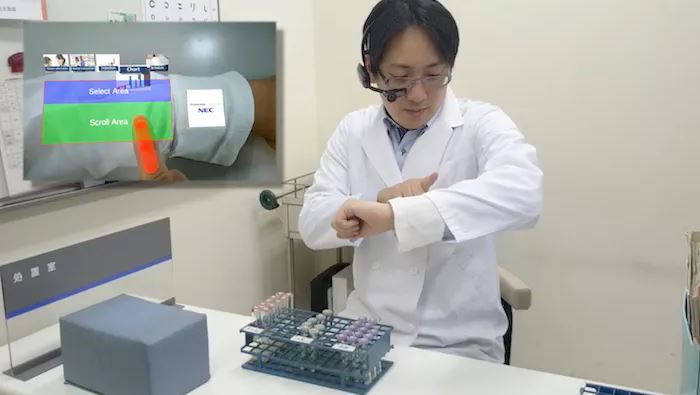 A concept first demoed way back in November 2015, the earlier rendition of the ARmKeypad used a pair of smart glasses and a modified smartwatch to convert an arm into a virtual keyboard, which recognised contact-based operations. However, in the latest iteration, the company has removed the dependency of the smartwatch and has incorporated contactless operations as well. What this essentially implies is that users can simply hover their hand over their arm and interact using the smart glasses. NEC believes that this improved interaction would come into use in hospitals and other workplaces, where workers might need to maintain sterilised conditions. Additionally, this would also come in use in places where wearing watches is not advised. Long story short, you can simply wave your hand and fingers over designated zones on your arm to perform operations – Minority Report style.

This isn’t the first instance we’ve seen of the arm being converted to an interactive surface. SkinTrack used a ring and a sensor enriched band to allow users to play Angry Birds on their arm, and Google’s Project Soli does something similar by recognising minute finger-based actions through the wearable (or any other) device itself.  NEC’s ARmKeypad, however, targets hospitals and medical professionals, to bring about ease of interaction within sterilised workplaces. The official exhibition of the concept is already underway at the International Modern Hospital Show in Tokyo, with future use cases targeted at manufacturing, security and distribution.
ShareTweetShare
Best Selling Mobiles