91mobiles.com
Home Android Phones New Nexus 10 What the Company Promises It Can Do 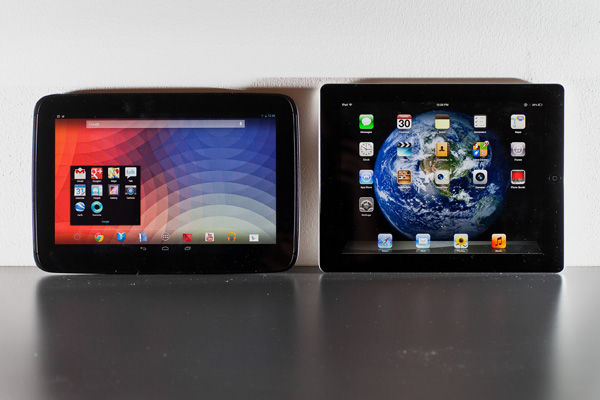 The 10-inch Nexus tablet is prided over by the Company, as being the best thing in the market. We don’t deny that it has capabilities, given the vast success that the nexus 7 enjoyed, and still enjoys. The new Nexus 10 comes with the Jelly Bean Operating System and the latest version of it. The Nexus 10 apart from getting a great amount of showcasing by the Company at various technology events is now advertised by the Company in a, not so novel way, but with emphasis supplied to its functions and features. The ad may not come to India, but you can catch it online, and rumor has it that it has received many views. The ad is about a couple, who are expecting a baby, and basically shows off how the Nexus is the smartphone phone option for both genders, (definitely targeting mature, monied youths) and even has functions and is user friendly for use by children. It also subtly highlights how the all powerful battery can take on tons of tasks without running dry, which is 500 hours of standby time and none hours of video playback to be precise.

The ad spans about 60 seconds and tactfully shows the couple using the various features of the Nexus 10 like, the fact that it has multiple user accounts, options like Google Calendar, Video chat features, Google Hangouts and more. The ad includes the birth of the child who ultimately also gets a Google email account. The ad lays stress to the fact that the phone is durable and can execute many functions with ease. Not that prospective buyers of the Nexus 10 need a spec review of this much adulated and awaited for device, however the certifies what we already know. The Nexus is the product of co-manufacturing by Samsung. The device has a neat pixel resolution of 2560 x 1600 pixels and a picture density of 300 ppi. The Nexus 10 announced along with the Nexus 4 smartphone, the Nexus 7 tablet and the newest Flavor in October last year. No doubt, the Android version 4.2 packs in a bunch of great features like Gesture Typing, through which you can swipe the screen across alphabets to type out emails and texts at ease. The Android version 4.2 has support for wireless display which means that you don’t need to plug into external displays and you can wirelessly watch movies, YouTube videos and also play games right on a Miracast-compatible HDTV. During the launch of the Nexus 10 Google, promised that its Google Play services would be expanded, and more of its content would be accessible to many countries across the world. Google entered into agreement with Twentieth Century Fox, Time, People, InStyle and some other Companies with a view to introduce more TV shows, movies and magazines within the service. To bring in more qualitative diversity to the audio features of Google Play, the Company has an agreement with Warner Music.

Android 5.0 Lollipop update coming to the Google Nexus 7 and Nexus 10 on November 3rd

Nexus 7 and Nexus 10 gets Ubuntu