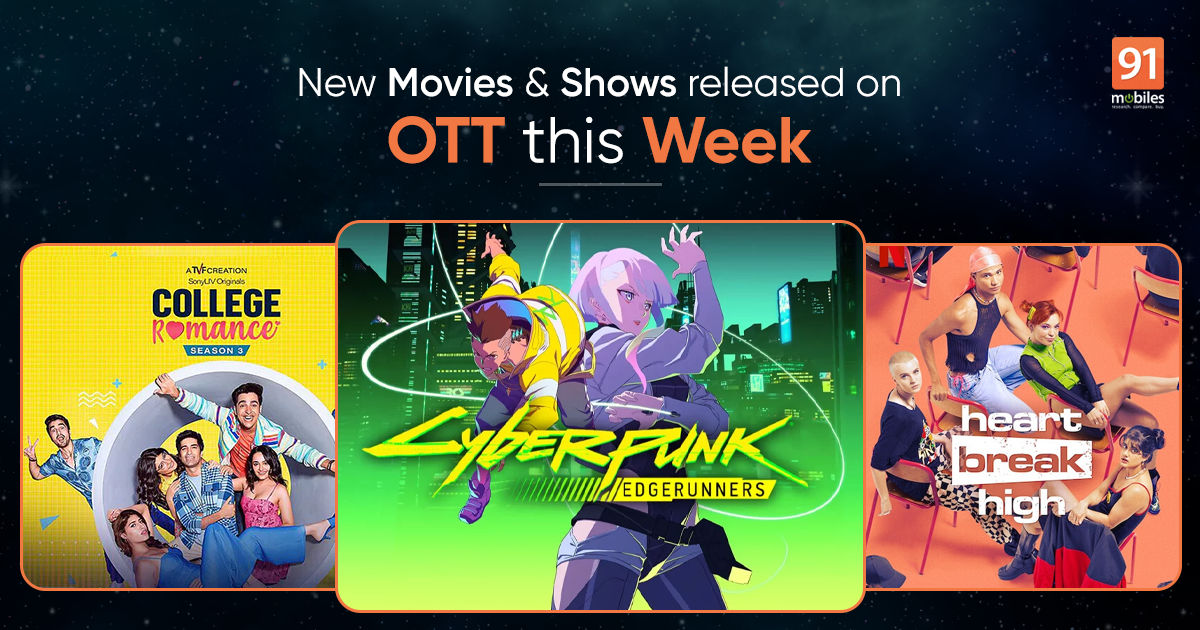 Here is an update on all the new OTT movies and series released this week on Netflix, Disney Plus Hotstar, and Amazon Prime Video. Two anime features have also been released this week – Cyberpunk: Edgerunners and Drifting Home – both on Netflix. From action to comedy to thriller, all genres have been catered to by the new releases this week, such as horror thriller Dahan, sci-fi drama Fate: The Winx Saga Season 2, and black comedy DO Revenge. There are so many new movies and series releasing this week that you will be spoilt for choice. Read on to know more so that you can add your pick to your watchlist.

The week began with a bang with the release of an anime series Cyberpunk: Edgerunners on Netflix. A spin-off of Cyberpunk 2077, this Studio Trigger series is a standalone, 10-episode story about David – a street kid living in the city of the future named Night City. The town is obsessed with technology and body modification which has led to corruption and cybernetic implants. With circumstances pushing him over the edge, he is forced to live as an edge runner – a mercenary outlaw aka cyberpunk.

Heartbreak High is an Australian drama series that showcases the hardships of teenagers. A reboot of a 1994 series, this romantic drama series is set in Hartley High over 20 years on. There is a mural on campus that reveals secret hook-ups and somehow the school authorities come to know about it and everyone suspects Amerie. This results in messy fallouts and eventually, Amerie becomes a total outcast. However, she soon finds new friends (Quinni and Darren) with whom she needs to find ways to repair her damaged reputation as well as explore different aspects of teen life, including love, sex, and heartbreak.

Dahan: Raakan Ka Rahasya is a supernatural horror series starring Tisca Chopra, Saurabh Shukla, Rajesh Tailang, Ankur Nayyar, and Mukesh Tiwari in lead roles. The story is set in Shilaspura, where a preacher’s spirit is trapped in a mound as per legend and where occult practices are common. This land is also rich in rare minerals that catch the attention of an IAS officer (Tisca Chopra). She plans to dig it but kick-starting the mining expedition is not easy as residents believe that it will upset the spirit and destroy the entire place.

Where to watch – Disney Plus Hotstar

Fate: The Winx Saga returns for yet another season on Netflix. Season 2 of this live-action adaptation of Nickelodeon’s Winx Club (2004) will see new characters joining the new term of the magical boarding school Alfea in the Otherworld. Bloom, Aisha, Stella, Terra, and Musa will be joined by Flora, Grey, and Sebastian, among others. The eight-episode fantasy drama series will be filled with emotion and adventure, showcasing how these magical beings deal with love, animosity, monsters, and much more.

Helmed by Ali Abbas Zafar, Jogi is a fictionalized drama movie set in the backdrop of the fateful day of 31st October 1984, when anti-Sikh riots broke out in New Delhi. There was tension all around and Sikh families were fearing for the well-being of their loved ones. Amidst the unrest, the biggest human heist was done by three friends of different faiths. On one side, the communal hatred of a few was leading to the mass murder of Sikh people; while on the other side, these three friends were fighting against all odds to try to save the lives of people of their neighborhood. The story shows the power of friendship, love, courage, and sacrifice.

Another season of the teen drama series College Romance is set to premiere on Sony LIV on  September 16. Trippy, Naira, Karan, Bagga, and Deepika are back with more fun and entertaining moments in Season 3 of this rom-com series. While attending college together, they experience love, heartbreak, happiness, sadness, excitement, and many other emotions that shape the course of their friendship. Filled with nostalgic and fun moments, College Romance Season 3 shows the struggles of collegegoers.

Where to watch – SonyLIV

Do Revenge is a black comedy movie starring Camila Mendes as Drea Torres and Maya Hawke as Eleanor. Both were happy with their respective high school lives until unpleasant incidents caused shame. Drea’s perfect world crashes when her topless video is leaked while Eleanor becomes an outcast after rumour spreads that she tried to forcefully kiss another girl. Both are devastated by these developments and finally, agree to go after one another’s enemies to exact revenge. Will they be able to ‘do revenge’?

The American horror drama thriller Goodnight Mommy is a remake of an Austrian movie of the same name. Helmed by Matt Sobel, the suspenseful mystery stars Naomi Watts, Cameron Crovetti, and Nicholas Crovetti as Mother, Elias, and Lucas, respectively. The story unravels when the twin brothers visit their mother’s country home. Excited to be there, the twins soon start feeling that something is not right. They suspect that the person claiming to be their mother, whose head is swathed in gauze, is actually an impostor. Who is she really?

Directed by Eddie Sternberg, I Used to be Famous is a charming British drama film starring Ed Skrein (as Vince) and Leo Long (as Stevie). As the title suggests, Vince used to be a famous boy band star who is struggling to make a comeback. After many rejections, he does an impromptu jam session on the streets where he meets Stevie. Latter is a young autistic drummer who has an extraordinary sense of music and rhythm. Soon, an unexpected but beautiful bond of friendship is formed between the two that helps them both battle their inner demons and become better persons.

I Used to be Famous IMDb rating – NA

Gymnastics Academy: A Second Chance! is a sports drama that shows how one should never give up on their dreams. The story revolves around a young talented gymnast Kyra Berry who dreams to go to the Olympics. However, her dreams are shattered because of an injury that also takes a toll on her confidence. Surprisingly, she gets a second chance when an ex-world champion Australian gymnast Maddy Cornell sees her potential. Maddy is now a gymnastics coach who invites Kyra to Australia where she can win a scholarship and make the best of her second and last chance to fulfill her dreams.

Other OTT releases this week

Apart from these, a few more series and movies were released this week. Here’s a quick look at them

New OTT releases this week: Plan A Plan B, Karm Yudh, The Empress, Blonde, and more