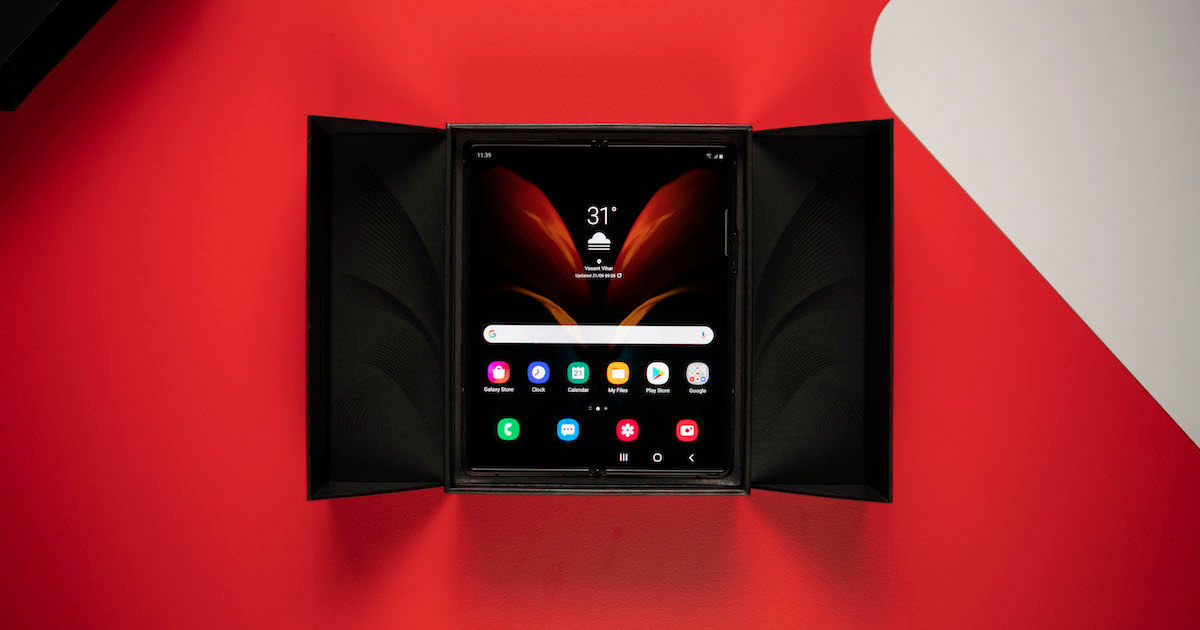 Samsung could be working on a triple folding phone, according to a new patent it filed at the ‘World Intellectual Property Organisation’, as discovered by 91mobiles. The patent was filed back in November 2020 and was published on June 3rd, 2021. The attached images show off the entire design and folding mechanism of the phone in full glory. The hinge design seems similar to the one on the Galaxy Z Fold2. Considering that Samsung had already aced the foldable phone designs with Galaxy Z Flip and Z Fold Z, we can expect the triple folding mechanism will bring improvements over the current generation, that is considering if Samsung plans to launch a commercial phone with this design.

On the front, we see a tiny punch-hole cutout for the selfie snapper and narrow bezels for an immersive viewing experience. On the back, two separate hinges where the phone folds can be clearly seen. The back panel houses triple cameras arranged in a vertical module.
Interestingly, the second hinge in the middle seems to house camera lenses and these may function as selfie cameras when the phone is completely folded. The right screen folds on top of the middle panel, while the left screens fold behind the middle one. The USB Type-C port and speaker grill are present on the side of the left screen. The patent images suggest the display fold can be adjusted at any desired angle. It can also be set up in desktop view to enable DeX mode. Unlike the Galaxy Z Fold 2, the front screen here looks wider so it can fit more content. However, the patent fails to reveal the exact dimensions of the phone. Unfortunately, that’s pretty much everything that is revealed from the Samsung patent but it would definitely be interesting to see Samsung launch a triple folding phone as it adds more innovation to the foldable segment. You can check the complete patent from here.

Another Samsung tri-fold phone patent was spotted on the USPTO website a few days ago. That design showed off one large display that can be folded on either side to the back. This also allows the S Pen to fit in between the folded corners on the back.

While we wait for the Samsung triple folding phone, you can check out more news about the other upcoming smartphones as well as popular product recommendations on our Facebook, Twitter, and Instagram pages and head to our YouTube channel for the latest videos.