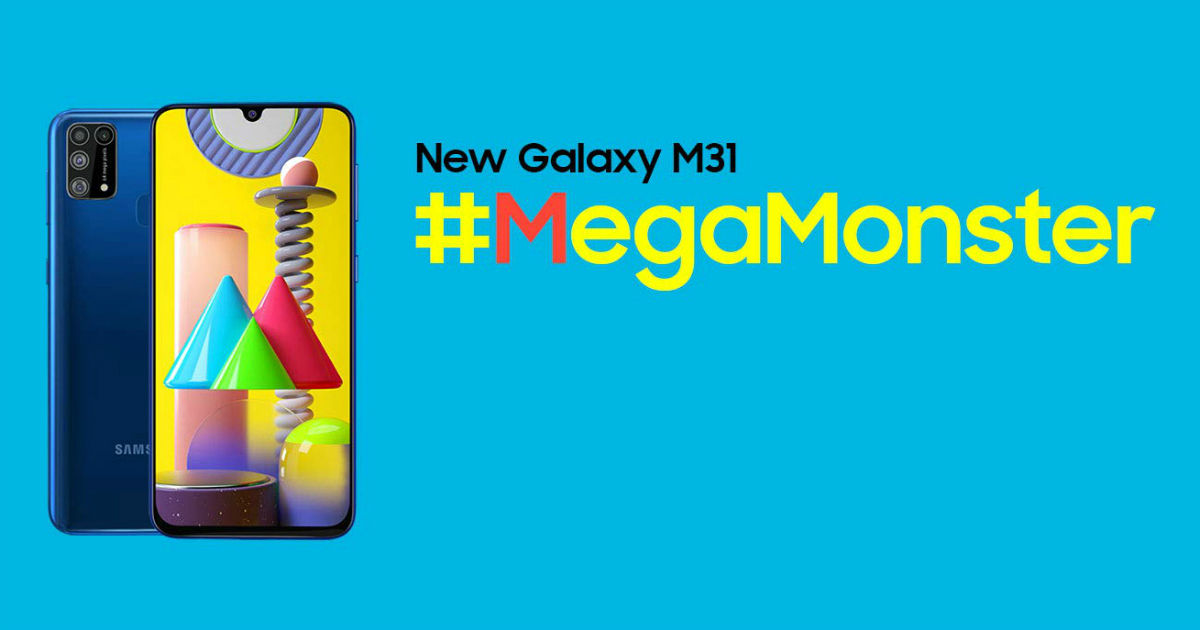 Samsung Galaxy M30s, which launched in September 2019, was a resounding success during the festive season. Not only was it the most successful model of the Diwali festive season last year, it has an astounding rating of 4.4 out of 5 on the e-commerce platform. The Galaxy M30s offered amazing battery life thanks to the huge 6,000mAh battery, which was complemented by a 48MP triple camera setup that took exceptional images and videos. Now, Samsung is launchingthe Galaxy M31 – the smartphone has been teased a lot over the past few days and has now been confirmed to launch in India on February 25th. This device is being termed a MegaMonster owing to not only a 6,000mAh battery but also the best-in-class 64MP quad camera setup. That makes the Galaxy M31 a worthy successor to the much–loved M30s. Let us give you a full lowdown on everything you can expect from the Samsung Galaxy M31.

For optics, Samsung Galaxy M31 has a quad camera setup that’s headlined by a 64MP sensor. This is the highest camera resolution offered in the Indian market at the moment. Along with the 64MP wide-angle primary sensor, the smartphone has an 8MP sensor with 123-degree field of view to shoot ultra–wide-angle shots, a 5MP depth sensor for portrait shots, and another 5MP lens only to capture macro photos as close as 4cm. And it doesn’t come as a surprise that the main 64MP quad camera setup of this Samsung handset is accompanied by a dedicated Night Mode for clicking stunning lowlight photos. Together, these four cameras are indeed quite a big upgrade over the triple rear camera setup onboard the Galaxy M30s, which in itself was quite impressive.

The Samsung Galaxy M31 has lots in store for video enthusiasts. Thanks to its advanced processor, it will be able to shoot 4K videos from the rear camera, giving you stunning details in the visuals. The phone has also been equipped with the Super Steady feature that compensates for shakes when you shoot a video while walking, cycling, etc. – you won’t have to worry about smooth video footage in rough environments with the M31.

The Super Slow Mo mode will also be seen on this smartphone. While we don’t yet know the exact frame-rate at which this mode will operate, the ‘Super’ in its name suggests that it will be a much faster frame-rate than what’s offered by regular slow motion modes. If you enjoy capturing time-lapse clips, the Galaxy M31’s Hyperlapse mode will also please youby empowering you to tell a long story within seconds thanks to stabilised time-lapse videos.

A huge 6000mAh battery that doesn’t run out

With the M30 lineup, Samsung focused on delivering a battery that is sufficient to handle the most demanding usage. While the first smartphone from the series offered a 5,000mAh cell, the Galaxy M30s came with an even bigger 6,000mAh battery. That continues with the Samsung Galaxy M31 too, which adopts the same 6,000mAh cell with an aim of providing a battery that lasts well over two days. According to teasers, it will allow the phone to offer up to 21 hours of web browsing, 26 hours of video playback, 48 hours of talk time, and up to 119 hours of music playback. It’s a no brainer that anyone who wants a smartphone with incredible battery life to watch their favourite videos should definitely go for the Galaxy M31. And that’s not all; we’re also hearing that fast-charging support will be present on the phone, with a compatible charger accompanying it in the box. This means you won’t have to wait too long to charge the battery!

A stunning display that ensures a vivid viewing experience

The Galaxy M31 has been confirmed to ship with a Super AMOLED panel, which places it much ahead of most LCD panel-toting smartphones in the segment. The Samsung handset will boast of an Infinity-U panel that places a small U-shaped notch at the top to occupy the front camera, making sure you can enjoy your Netflix marathons without much interruptions. You can expect the smartphone to feature full–HD+ resolution as well. A contrast ratio of 100000:1, auto-adjustment to lighting conditions, and excellent viewing angles combined with the Super AMOLED display mean that the visuals will be vivid as well as crisp and detailed, no matter what kind of content you’re watching.

The Samsung Galaxy M31 is shaping up to be a remarkable smartphone even before its arrival in the market. All the above–mentioned features at a price under Rs 18,000 makes for great value for money. And like its predecessor, the Galaxy M31 will be up for grabs via Amazon.in, the Samsung online store, and leading retail stores across the country. That said, its launch is slated for February 25th, so stay tuned to this space for knowing more about it.