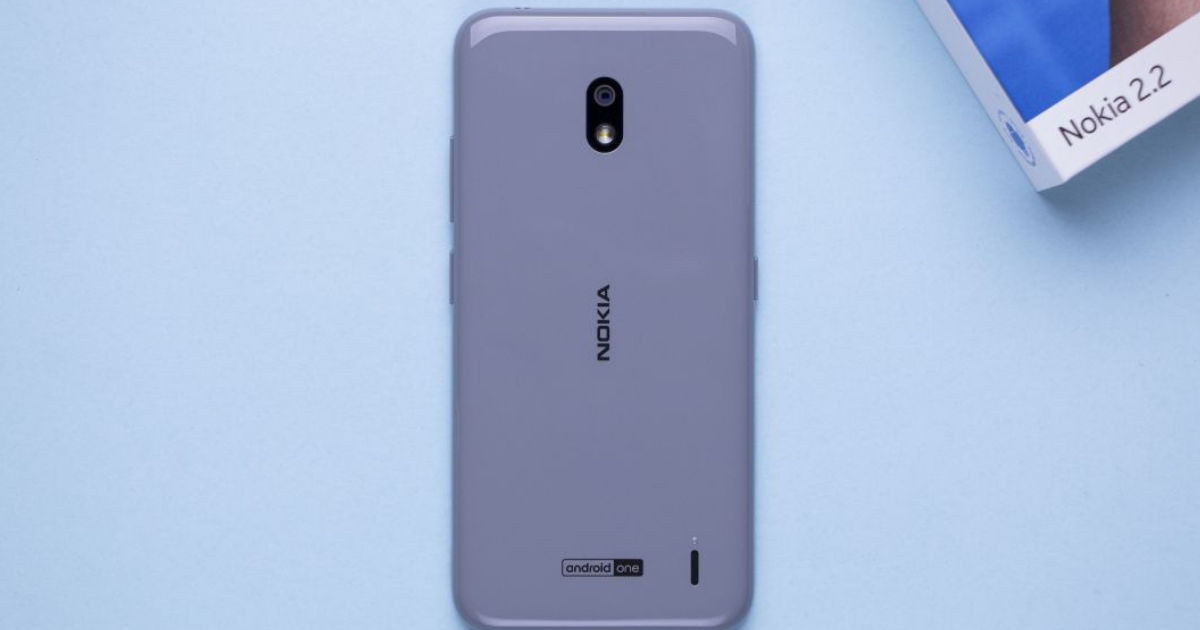 “A sneak peek at Nokia’s latest affordable handset — the Nokia 2.2”

Finnish giant Nokia has had a busy schedule this year. After unveiling a slew of devices at MWC, the company recently launched two of them — Nokia 3.2 (review) and 4.2 (review) — in India. And now, just days after, the brand has launched an even more affordable device in the form of the Nokia 2.2, which not only ships with the latest Android software but also comes with a removable battery akin to smartphones from the past. I managed to get my hands on Nokia’s ‘throwback-modern’ smartphone and here are my hands-on impressions of the same. But before that, let’s take a quick look at the phone’s box contents. 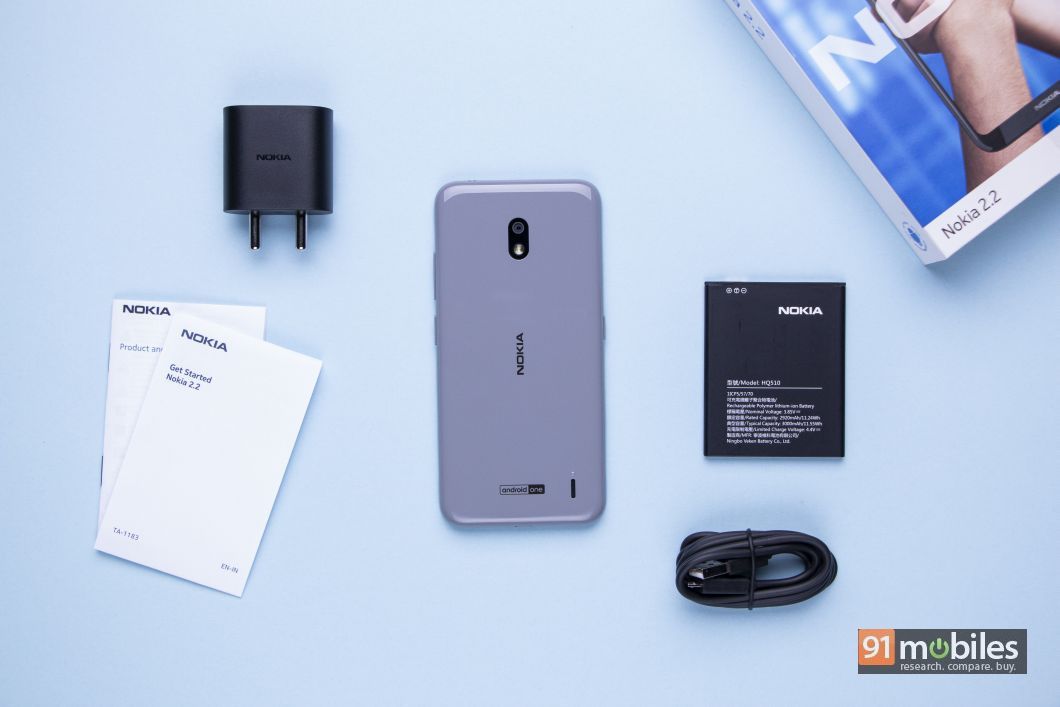 The Nokia 2.2 comes packed in a white cardboard box, upon opening which, buyers will find the smartphone itself, followed by documentation, a wall charger and a micro-USB cable. Much to my dismay, the retail unit doesn’t come with a pair of earphones, though that’s not really uncommon for handsets in this price segment.

Design-wise, Nokia has outfitted its latest smartphone in a plastic shell. However, unlike the matte plastic finish on the Realme C2 (review), the Nokia 2.2 sports a glossy finish which gets quite smudgy. It also means that the phone is quite slippery, so I wouldn’t advise you to use it with just ne hand in a busy subway. You’ll also need to carry a microfibre cloth on you at all times if you want to keep the phone in a pristine condition. That said, despite shipping with a 5.71-inch display, the Nokia 2.2 does feel quite compact in the hand. 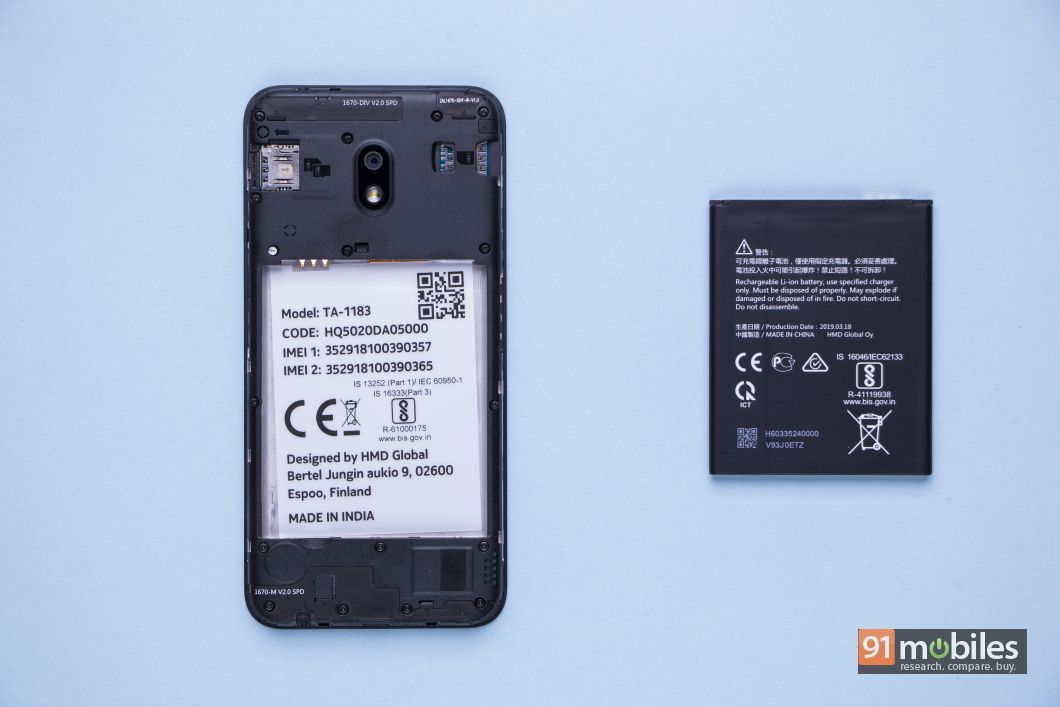 Unlike most Android phones, the Nokia 2.2 features a removable back panel which can be opened to expose the smartphone’s user-replaceable battery. You heard it right — the battery onboard the Nokia 2.2 isn’t bolted to its chassis and instead, can be easily removed and replaced with a different unit. Furthermore, you can even buy separate Xpress-on covers to spruce up the design of the phone. And, while the phone doesn’t ship with a fingerprint sensor, it somewhat makes up for that by offering facial recognition. During my brief stint with the device, the software recognized my face quickly, although the unlocking animation could’ve been quicker.

As for the rest of the ports and buttons, the Nokia 2.2 features a volume rocker and a power button on its right side. The smartphone’s left spine houses a dedicated Google key, which can be long pressed to invoke the search assistant. Lastly, the handset ships with a 3.5mm headphone socket which is present at the top, along with a micro-USB port for charging which has been positioned at the bottom. 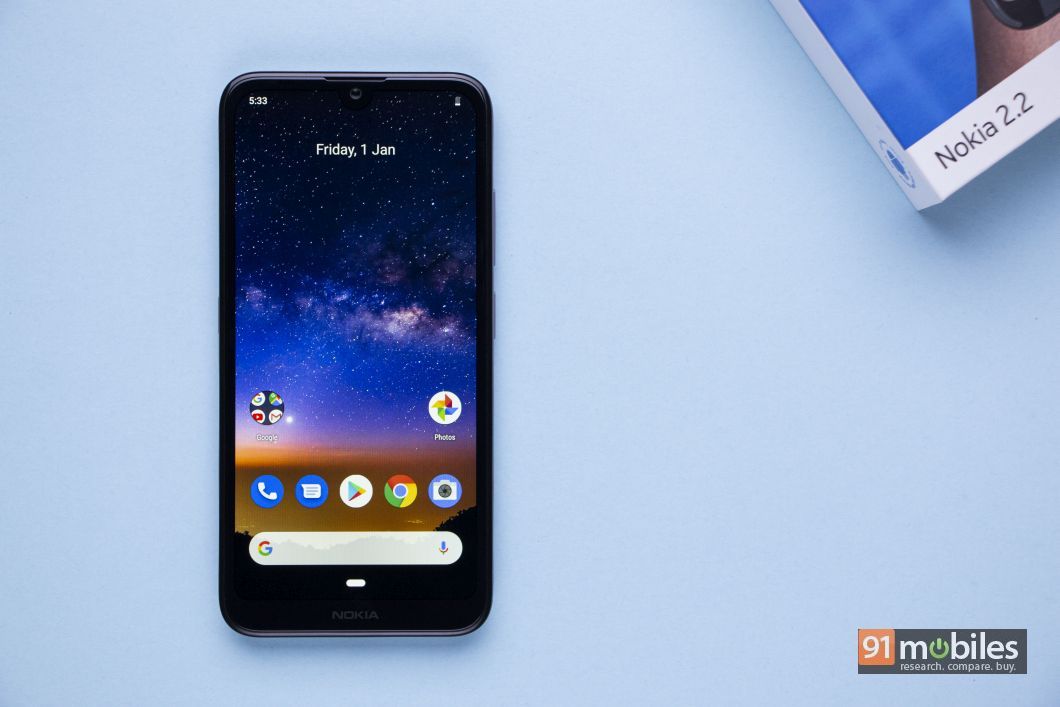 Up front, the Nokia 2.2 features a 5.71-inch panel HD+ panel which gets adequately bright. The panel has decent viewing angles too, and it ships with a tiny waterdrop-shaped notch atop, thereby paving way for an immersive movie-watching experience. 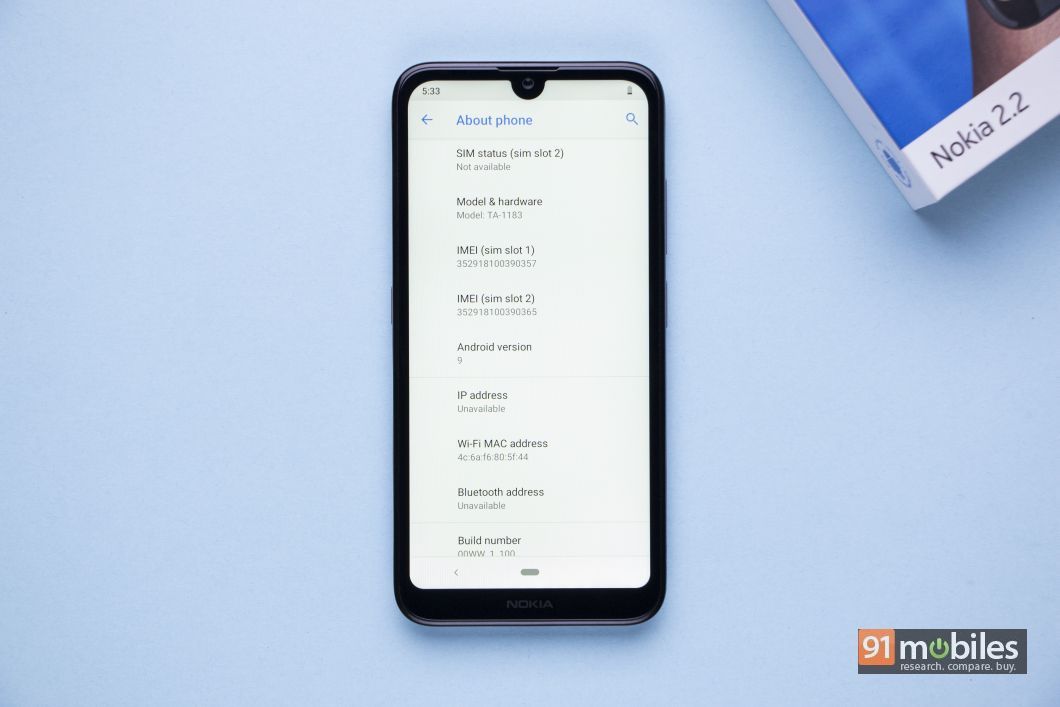 Coming to the core specs, the Nokia 2.2 is powered by a MediaTek Helio A22 processor which works alongside 2GB or 3GB of RAM. Correspondingly, buyers will get either 16GB or 32GB of built-in, user-expandable storage with the phone. During my time with the device, I didn’t come across any major instances of lag or stutter. There were some UI jitters whilst navigating through the menus, but all in all, I was satisfied with the handset’s performance. 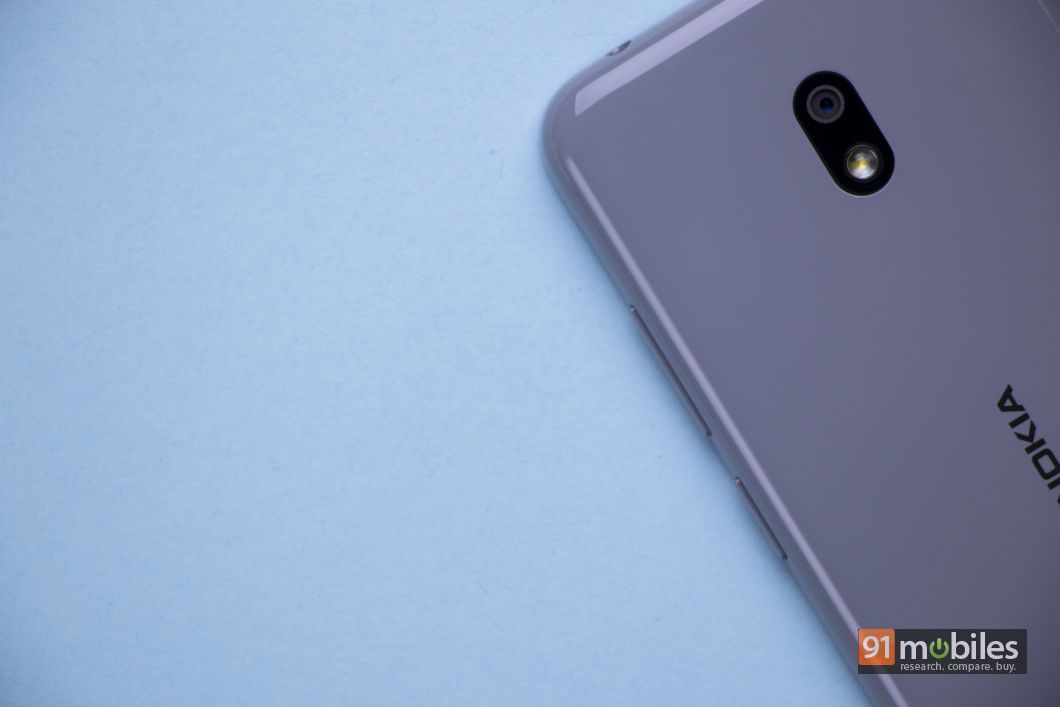 For cameras, the Nokia 2.2 ships with a pair of 13MP and 5MP sensors on the back and the front, respectively. While it’s too early to pass any judgement on the phone’s camera prowess, the initial shots I clicked with the phone looked promising. 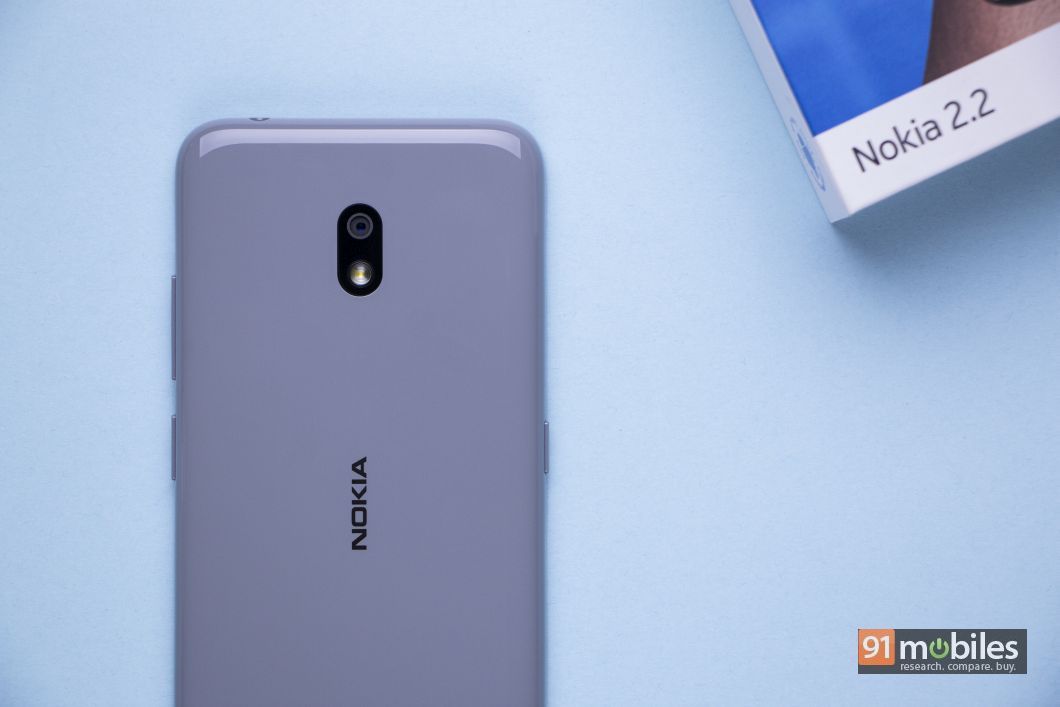 The Nokia 2.2 is fuelled by a 3,000mAh battery. The handset boots Android Pie and since its part of Google’s Android One project, the phone will receive software updates for the next two years. In fact, the handset is perhaps the most affordable smartphone that’s confirmed to get Android Q update. Coming to the pricing, the handset will be available for Rs 6,999 and Rs 7,999 for the 2GB RAM variant and 3GB RAM model, respectively. For the price, the smartphone will go up against devices like the Realme C2 and the Redmi 7 (review). It’ll be interesting to see how the phone fares amidst the competition, so stay tuned for our full review.