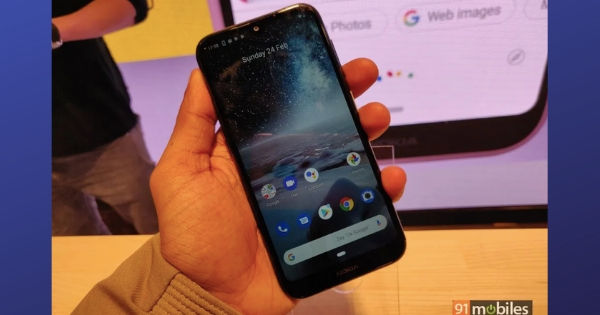 “The Nokia 4.2 and the Nokia 3.2 are the first budget Android One smartphones to feature a dedicated Google Assistant button”

HMD Global has officially teased the launch of the Nokia 3.2 (first impressions) and Nokia 4.2 (first impressions) budget smartphones in India. The Nokia Mobile Twitter handle posted a short video showcasing the notification light and the Google Assistant button. The phones were originally launched at the Mobile World Congress earlier this year and will go on sale in the US on May 14th. Late last month, the phones were listed on the Nokia India website as well. As per the tweet, the two handsets will be launched in India on May 7th.

The Nokia 4.2 is a budget offering from HMD Global and was launched alongside the Nokia 3.2. It is possible that the company will launch both phones in India on the same day. The teaser focuses on the dedicated Google Assistant button that’s available on both phones. It contains the hashtag #doitall and the words “all your answers are a tap away”, clearly hinting at the smart capabilities of Google Assistant. You can also see the notification light around the power button, which is a clever implementation of a feature that’s been removed from almost every other Android smartphone.

All your answers are a tap away. 4 days before you can #DoItAll
Stay tuned! pic.twitter.com/r4Jwsxj744

Both the devices feature a glass sandwich design with a rear mounted fingerprint scanner. a waterdrop notch, and a plastic frame. The phones run stock Android 9.0 Pie and are part of the Android One program. The Nokia 4.2 is the more powerful of the two devices, and features a 5.71-inch display with an HD+ resolution. The phone gets a Snapdragon 439 processor, which is coupled with up to 3GB RAM and 32GB of onboard storage. It has a dual-rear camera setup with a primary 13-megapixel sensor and a secondary 2-megapixel unit. For selfies, it has an 8-megapixel sensor, and a 3,300mAh battery keeps everything running.

The Nokia 3.2 is powered by the Snapdragon 429 chipset and is also paired with 3GB of RAM and 32GB storage. It features a larger 6.29-inch HD+ display and a 4,000mAh battery. However, the phone only gets a single 13-megapixel rear camera, and a 5-megapixel selfie unit.