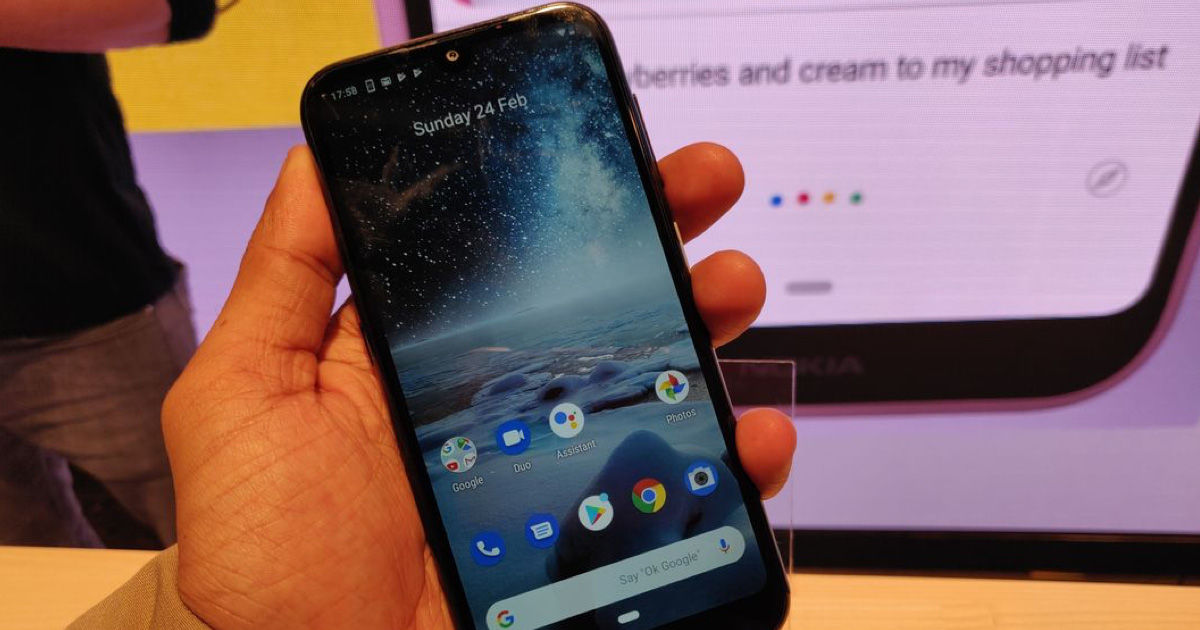 “Our first impressions of Nokia’s latest entrant in the affordable segment – the Nokia 4.2”

Nokia seems to have a smartphone range for every number. In fact, you could probably name one Nokia smartphone if you counted from one to nine – the Nokia 1 Plus (first impressions), the Nokia 2 (first impressions), the Nokia 3.2…and so on and so forth. But, up until today, the company didn’t have a series which started with four. Honestly, I feel that’s partly why folks at HMD even came up with the Nokia 4.2 – to go full circle. I went hands-on with the unit at MWC and here are my initial impressions of the same. 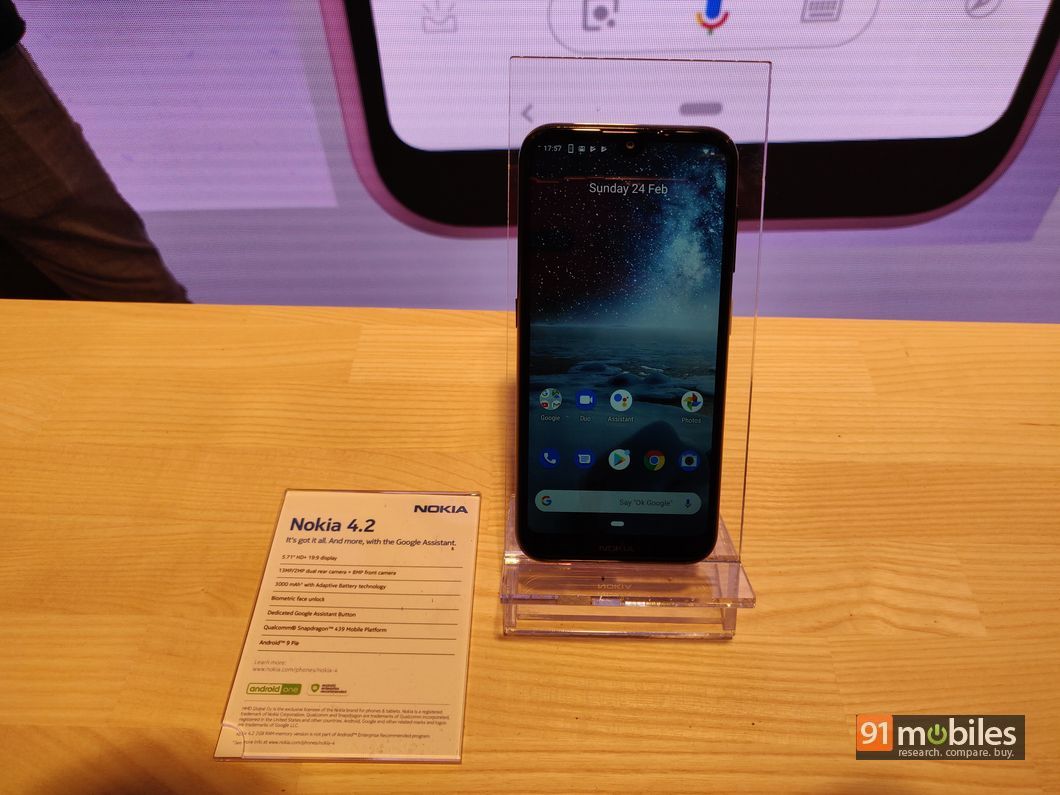 To me, the design of the Nokia 4.2 felt eerily similar to the company’s 6.1 launched a while back in India. In fact, if you look up both the devices online, you’ll be hard-pressed to tell the two smartphones apart. Now, that’s not a bad thing per se, as I loved the design of the Nokia 6.1 and I’m glad it’s forayed into the company’s more affordable offering. As for the materials used for construction, Nokia has furnished the 4.2 with 2.5D curved glass on both, the front as well as the back which is held together by a plastic trim. Everything considered, the design feels really elegant, especially in the company’s ‘pink sand’ hue which coincidentally, attracts way less smudges and fingerprints than the black colour variant of the device. 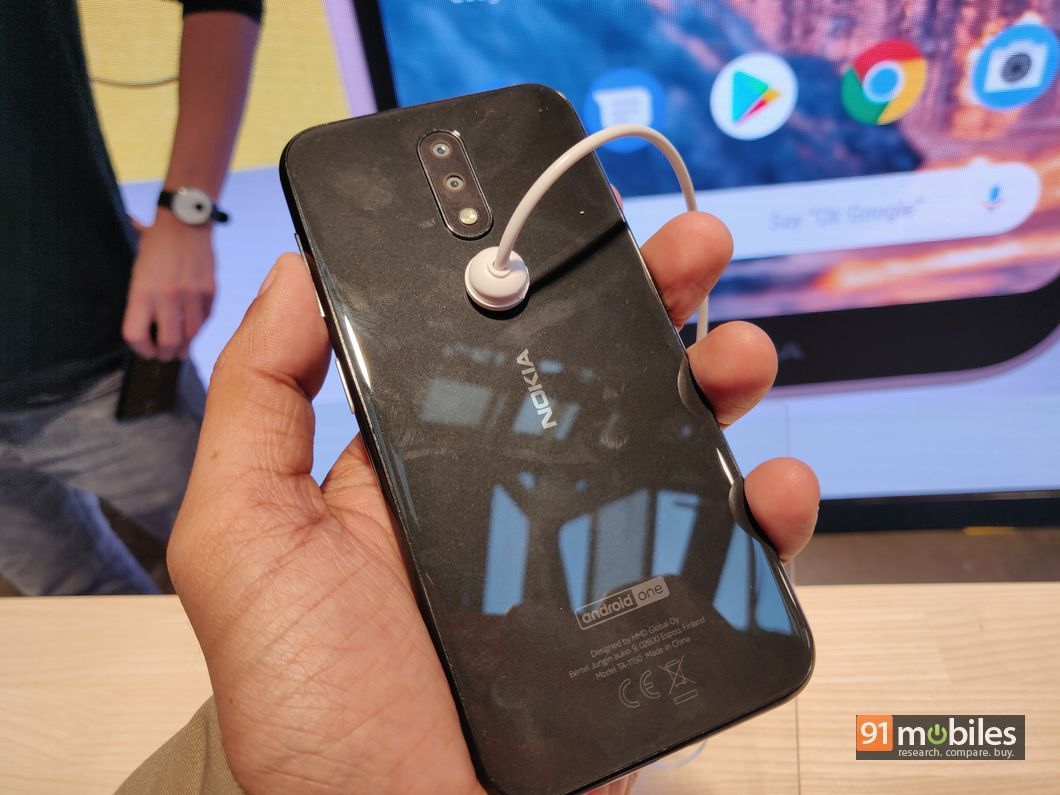 For ports and buttons, buyers will find the volume rocker as well as the power button on the right-hand spine of the device. Interestingly, Nokia has embedded a notification LED inside the power button which exhibits a breathing effect to signal incoming notifications. You’ll also get a dedicated Google Assistant key on the smartphone’s left-hand fasica, which to my knowledge, cannot be remapped to some other function. Lastly, there’s a fingerprint sensor positioned towards the back of the device which during my testing, worked just fine. The unlocking animation could’ve been a tad bit quicker but the sensor was fairly accurate during my first few goes. 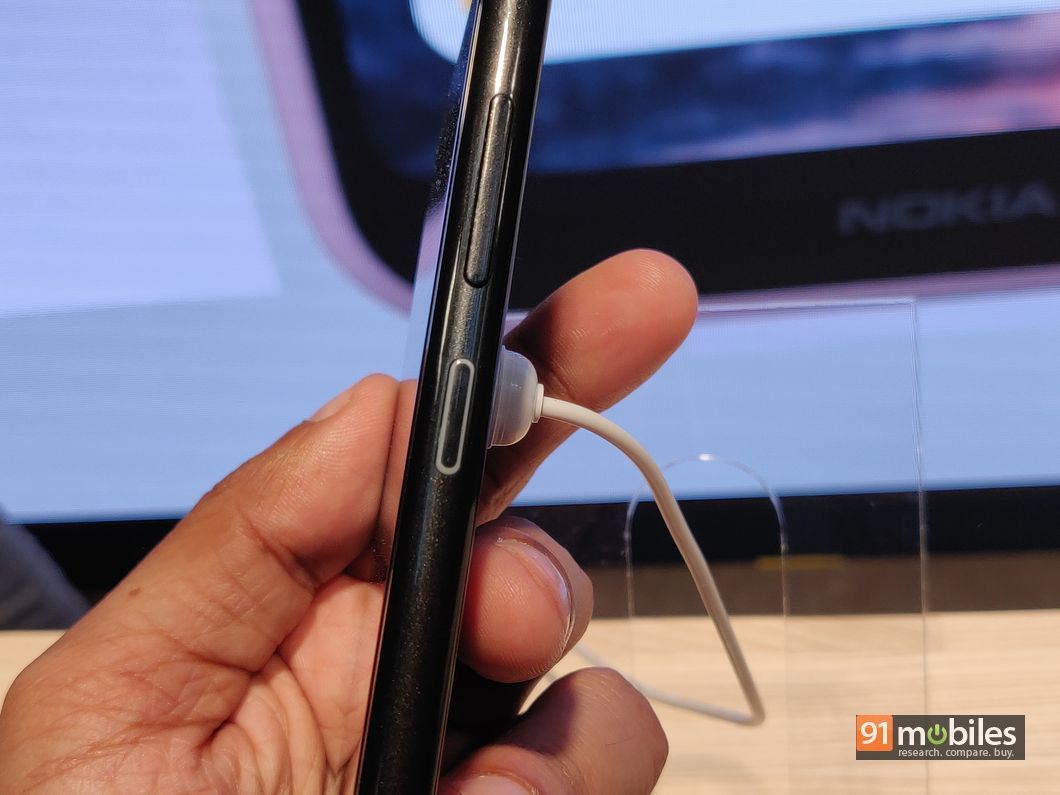 The Nokia 4.2 sports a 5.71-inch HD+ IPS panel with a 19:9 aspect ratio. The panel in itself is quiet nice, however, I would’ve wished to see more pixels crammed into the display. Regardless, the display gets adequately bright, has solid viewing angles, exhibits punchy colours and most importantly, ships with a tiny water-drop styled notch. Therefore, unless you’re pixel-peeping (like I was), the display on the Nokia 4.2 should pave way for enjoyable media consumption experience. 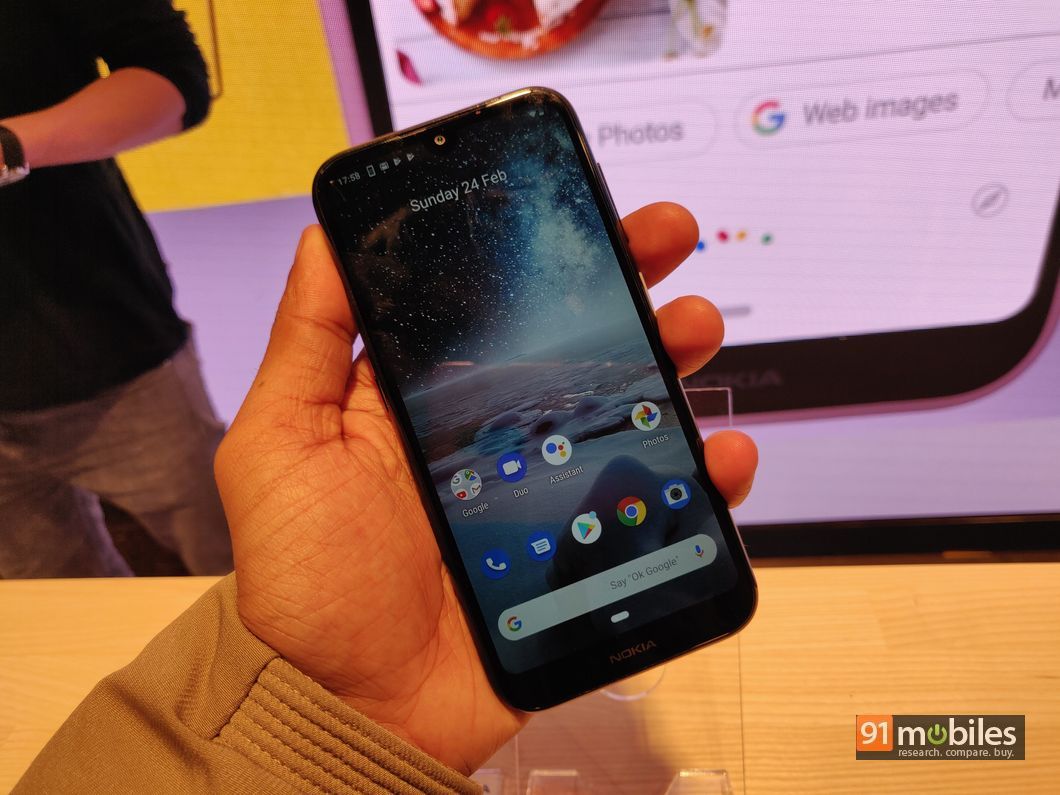 Driving the smarts on the Nokia 4.2 is a Snapdragon 439 CPU which can be paired with either 2GB or 3GB of RAM. Correspondingly, you will get either 16GB or 32GB of built-in, user-expandable storage. During my brief stint with the unit, I was reasonably satisfied with the smartphone’s performance. Pre-loaded apps opened swiftly, UI animations felt smooth and the device managed to hold a handful of apps in memory too. I’ll put the smartphone’s performance through its paces in my full review of the device, so stay glued to our website for the same. 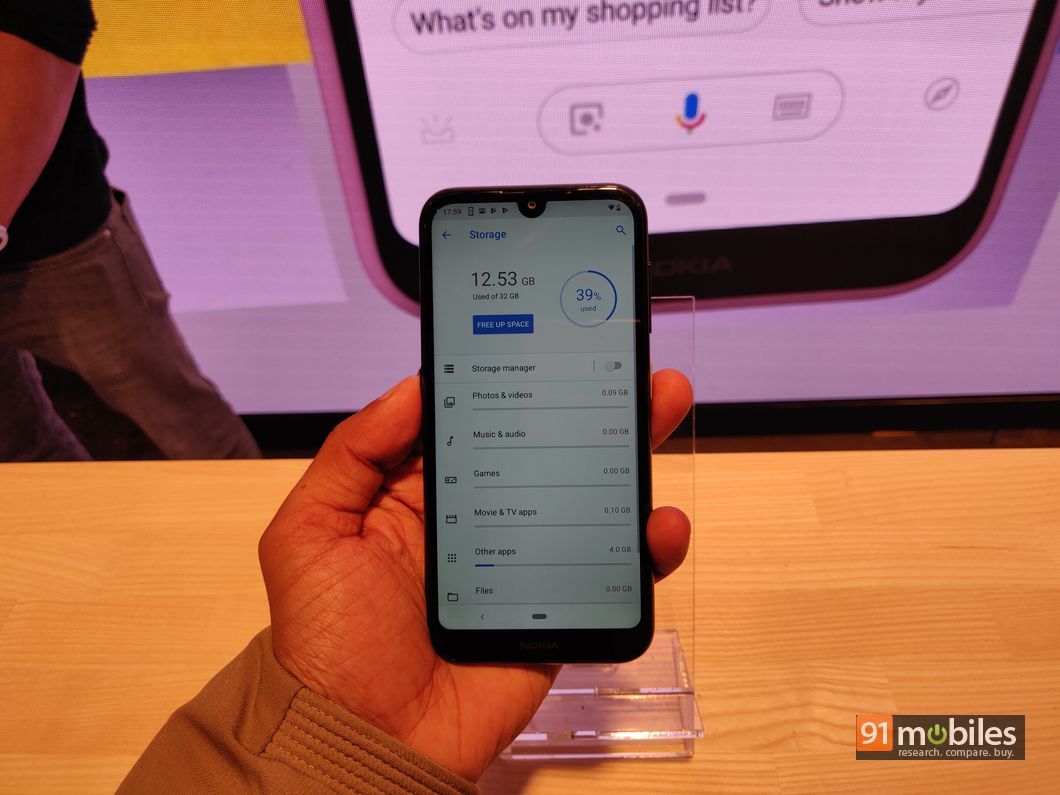 For optics, the Nokia 4.2 features a dual-camera setup at the back, comprising a pair of 13MP and 2MP sensors with f/2.2 apertures respectively. For selfies, the smartphone comes with an 8MP, f/2.0 front-shooter. The initial shots I took with the device looked promising, and the smartphone’s rear-facing sensors held up well in the launch event’s dimly-lit rooms too. Unfortunately, I couldn’t transfer the images from the device to my smartphone, but sit tight as I’ll have plenty of pictures to show once our full review hits the web. 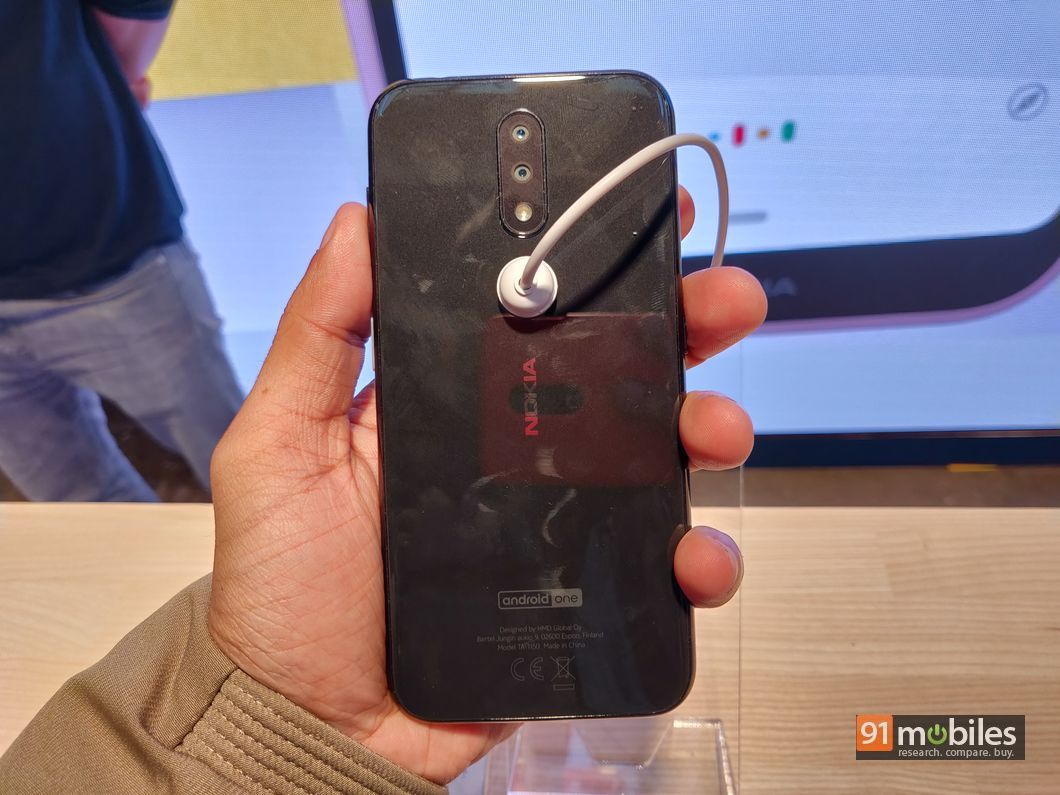 Much like every other Nokia smartphone, the Nokia 4.2 is also an Android One offering and therefore, buyers opting for the device will get a vanilla Android experience. The handset is fueled by a 3,000mAh battery and it starts at $169 for the base variant with 2GB of RAM and 16GB of storage.