Home Bottom panel Nokia 7.2 first impressions: not one to shy away from a photo... 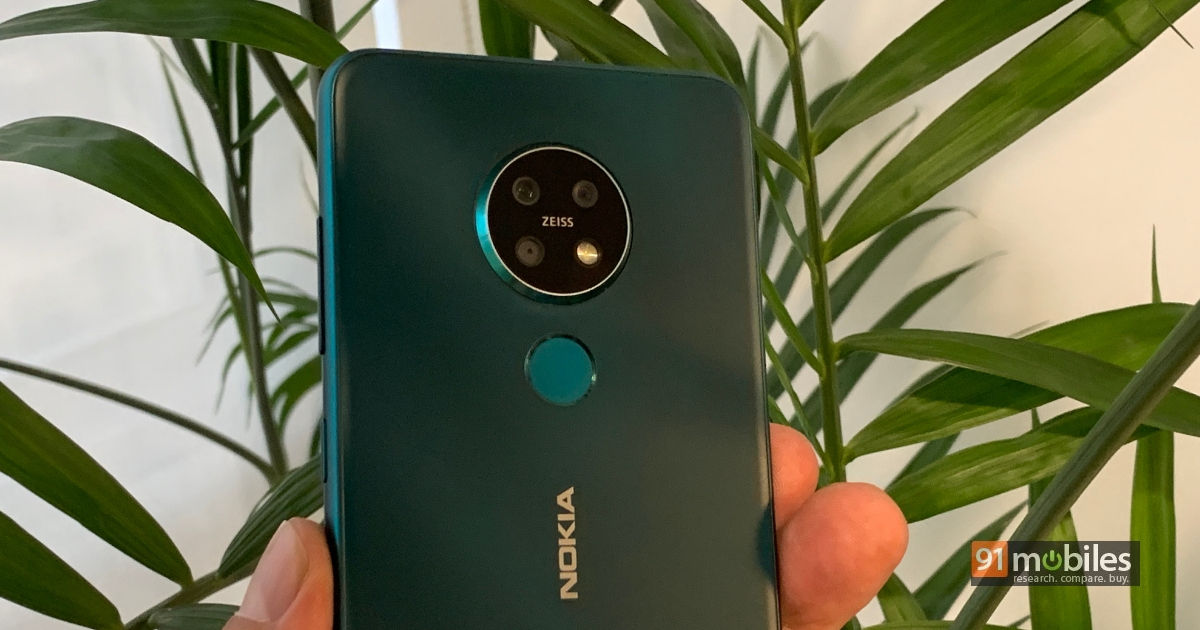 “Join as we go hands on with the new Nokia 7.2, a handset that looks very promising indeed”

Standing out as one of the key highlight’s of HMD Global’s flurry of device launches at IFA 2019, the Nokia 7.2 comes as the successor to the Nokia 7.1 (first impressions) that was launched in India late last year. While the focus (pun unintended) is mainly on camera capabilities and the screen experience, the Nokia 7.2 also impresses with its design. More on that later though… join us for a quick preview of what the new mid-ranger brings to the table as we go hands on. 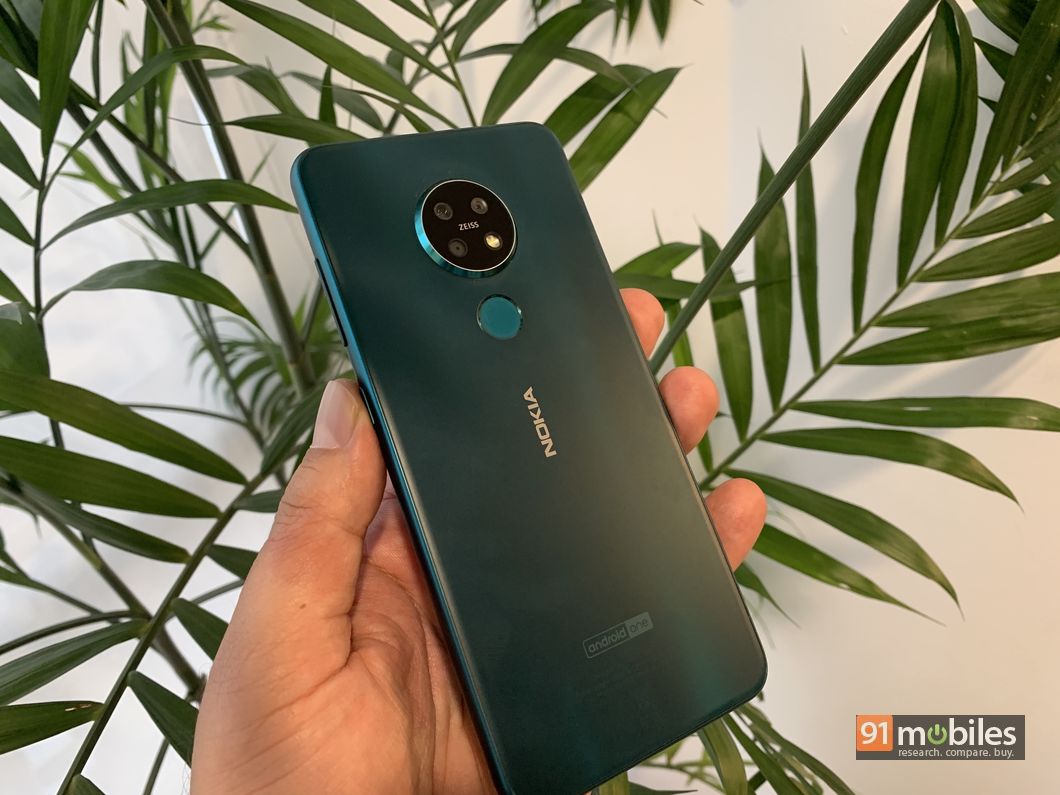 The Cyan Green variant of the Nokia 7.2 we got to play with is a looker for sure, though it’ll also be available in more staid Charcoal and Ice options. Up front is a 6.3-inch FHD+ display, with a waterdrop notch on top. The bezels on the side are quite slim, though there’s a noticeable chin at the bottom, bearing the Nokia logo. 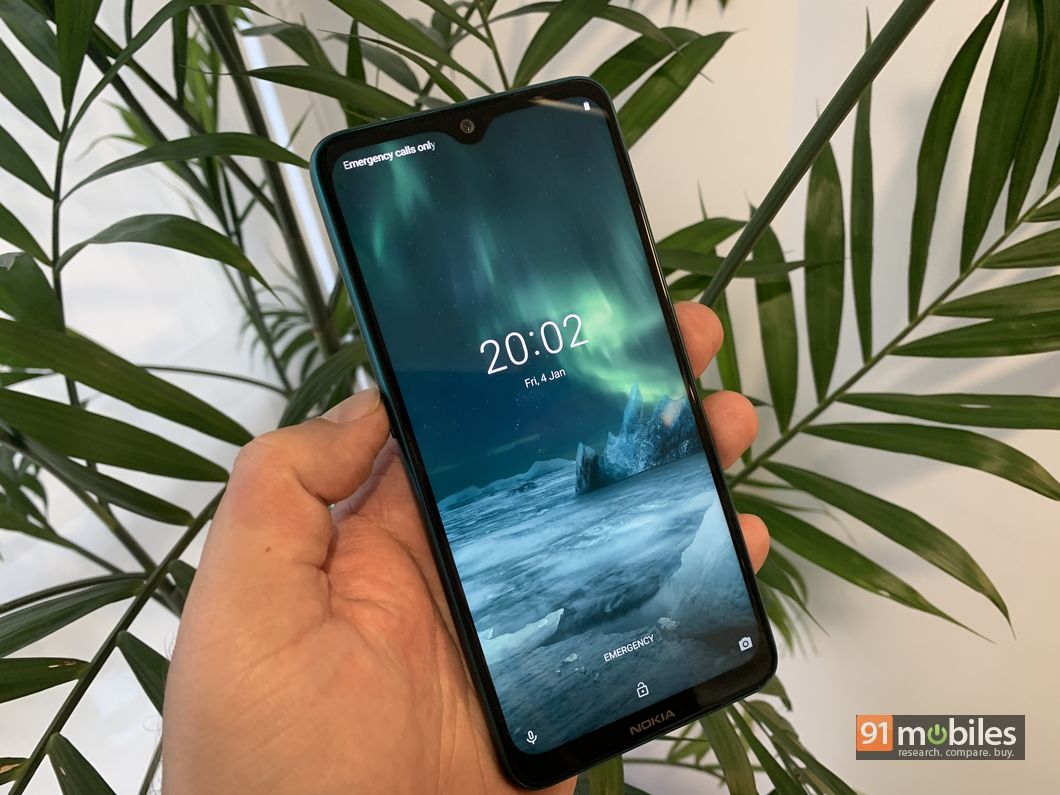 The IPS LCD panel employs Nokia’s PureDisplay tech, supports HDR10 and can even upscale video content to HDR in real time. It promises higher contrast and better dynamic range, likely paving way for a great media viewing experience. It did look pretty capable and vivid during our brief stint with the smartphone. 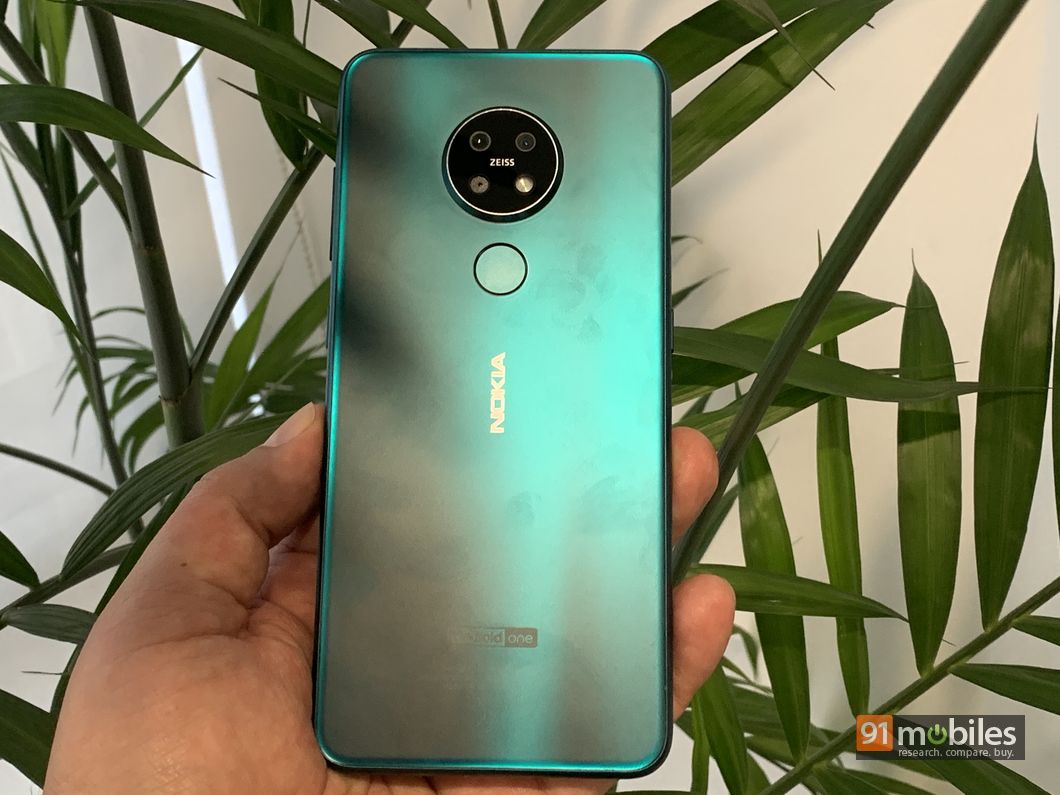 Things get far more interesting when you switch to the rear though, thanks to the matte finish that looks great, feels premium and keeps smudges and fingerprints at bay. HMD Global calls it a satin finish, and the polymer composite construction used by the handset is supped to be twice as strong as polycarbonate and half the weight of aluminium. 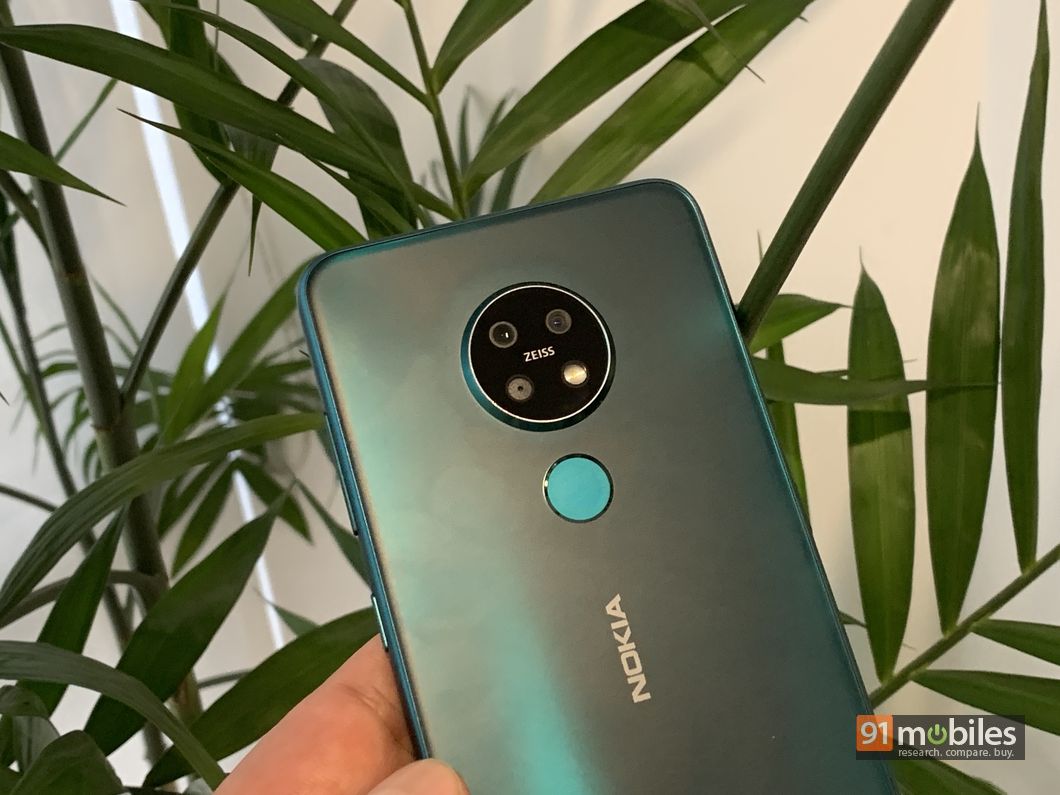 The most eye-catching element at the back, apart from the satin finish and the vivid Cyan Green colour on our demo unit is the camera module within the circular bump that juts out a bit. Inside are three cameras, a flash, and prominent ZEISS branding. A round fingerprint scanner is placed below, with the Nokia logo and Android One branding located further down.

The left spine has a dedicated Google Assistant button and the SIM tray, while the right edge houses the volume rocker and power key. The 3.5mm headset socket is on top, and the bottom is home to the USB Type-C port and speaker. 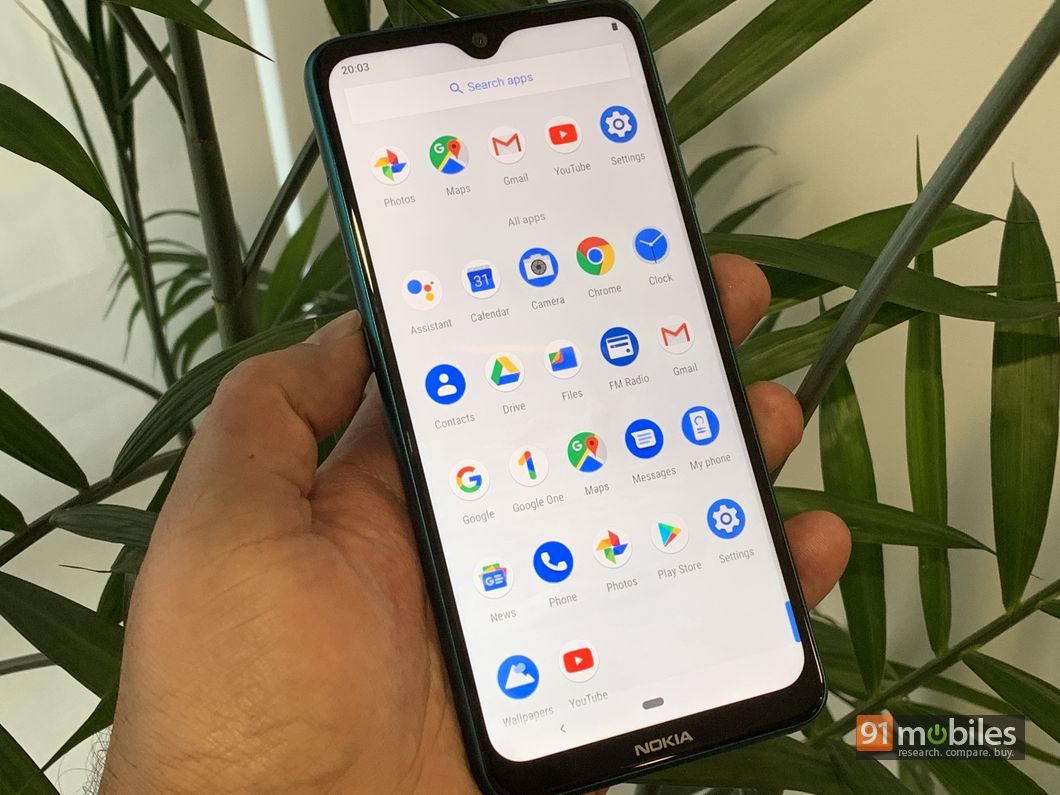 Since the Nokia 7.2 adheres to the Android One platform, as expected, the phone runs the vanilla build of Android Pie, and is Android 10 ready as well, guaranteed to receive monthly security updates for three years and OS upgrades for two years. There’s no bloatware to be found at all and the software experience is as stock as Google made it. 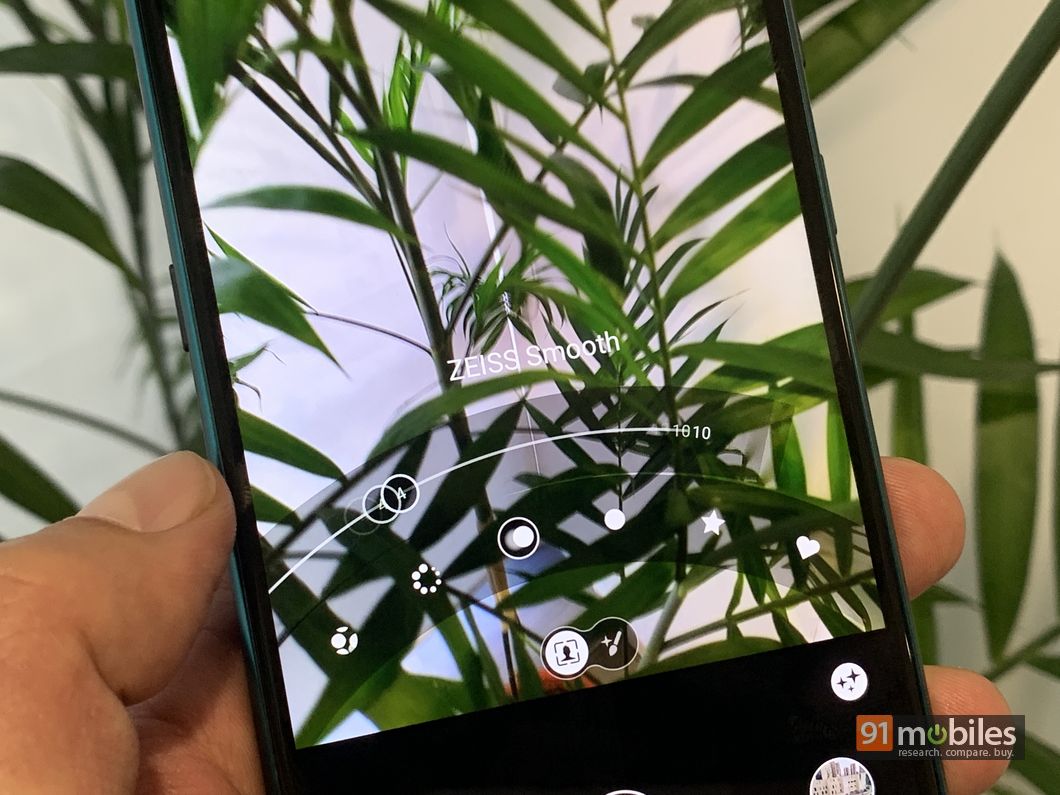 Coming to the mainstay of the device, we’re told that all four cameras on the Nokia 7.2 (three at the back and the lone ranger at front) boast ZEISS optics. The front sensor is a 20MP Quad Pixel f/2 sensor, while the triple cam setup at the back comprises a 48MP f/1.79 camera along with a 5MP depth and a 8MP f/2.2 wide-angle sensor with a 118-degree field of view. Apart from the usual set of modes, there’s a dedicated AI-powered night mode on offer that can supposedly detect whether the phone is held in hand or placed on a tripod, and can adjust the number of exposures accordingly. Specifically for the portrait mode, there are three signature bokeh styles from ZEISS (ZEISS Modern, Swirl and Smooth) included as well, that promise to churn out unique and high-impact bokeh shots. While we could only try out a few test shots within our short stint, which did look very promising, the proof of the pudding is in the eating and a full review would be able to evaluate how well the Nokia 7.2 can shoot in the real world.

The innards of the Nokia 7.2 are respectable, but nothing to shout out loud from the rooftops. They comprise Qualcomm’s Snapdragon 660 SoC, different variants that offer 4/6GB RAM and 64/128GB of e-MMC 5.1 storage, dedicated microSD slot (supporting up to 512GB), a 3,500mAh battery with 5V/2A charging support and support for aptX audio. The Nokia 7.2 will going on sale in a few regions around the world within this month itself, and we expect HMD Global to launch it in India as well. The starting price of the Nokia 7.2 is pegged at 249 euros, which converts to a shade under Rs 20K, and we’re hoping HMD Global launches it in India for a much more aggressive price. The device seems to have quite a bit to offer, especially in terms of design, display and camera prowess, but the competition is cutthroat and if it’s priced well and can deliver on the promise, it should turn out to be a compelling option.