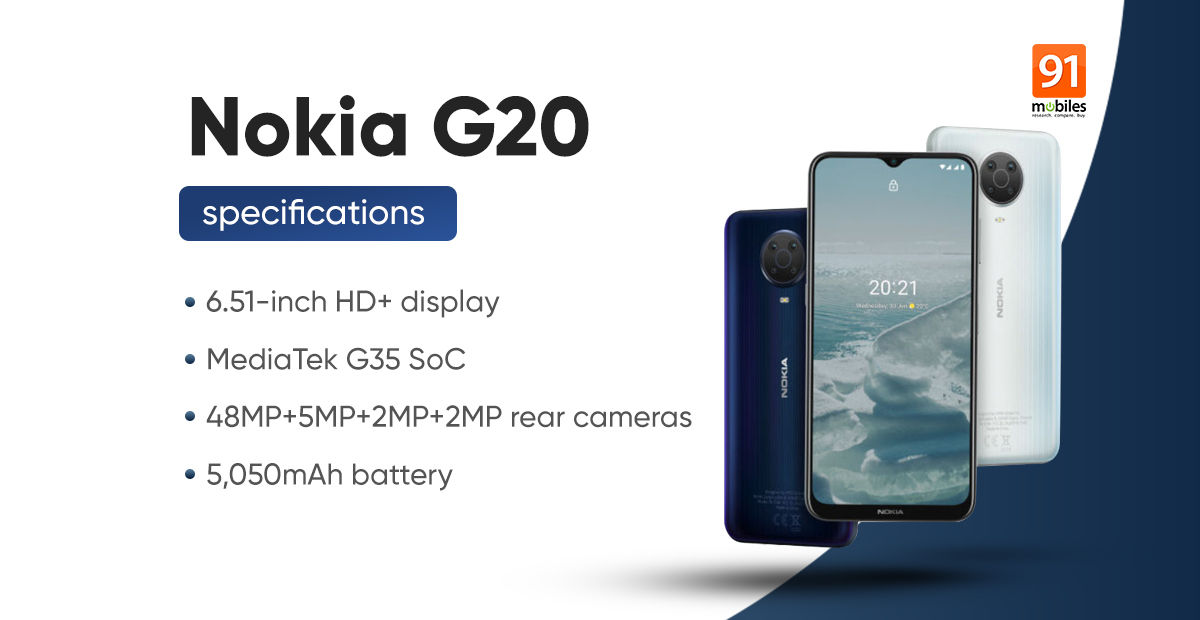 Nokia G20 was unveiled globally back in April alongside the Nokia G10 and new C-series phones. Now, it looks like the Nokia G20 is finally finding its way to the Indian market as it has been listed on Amazon and the ‘Notify Me’ option has gone live. The listing reveals the Nokia G20 price in India and some key specifications, such as a 48MP camera, a 5,050mAh battery, Android 11 OS, a 6.5-inch display, and more. The teaser video shows the phone will be available in Blue and White colour options with a textured finish on the back.

Also read: No, Nokia X60 series will not be running Huawei’s HarmonyOS

The Nokia G20 price in India starts at Rs 12,999 for the base model and should go up to Rs 15,000. The phone will be available to pre-order in India from July 7th at 12 PM IST. However, the listing fails to reveal when the phone would be on sale.

To recall the Nokia G20 specifications, it sports a 6.51-inch HD+ display with a 20:9 aspect ratio. It is powered by the Mediatek G35 SoC coupled with up to 4GB RAM, and 128GB internal storage that is further expandable via a microSD card up to 256GB. The phone runs on Android 11 out of the box and has a side-mounted fingerprint sensor for security.

Moving to optics, the Nokia G20 has quad-cameras on the back with a 48MP primary sensor, a 5MP ultra-wide-angle lens, a 2MP macro lens, and a 2MP depth sensor for portrait shots. There is an 8MP snapper on the front for selfies and video chats. It is an IPX2 rater for splash resistance. Connectivity features include 4G LTE, Wi-Fi, Bluetooth 5.0, GPS, and a micro-USB port. The phone measures 164.9 x 76.0 x 9.2mm and weighs 197 grams. A 5,050mAh battery fuels the phone