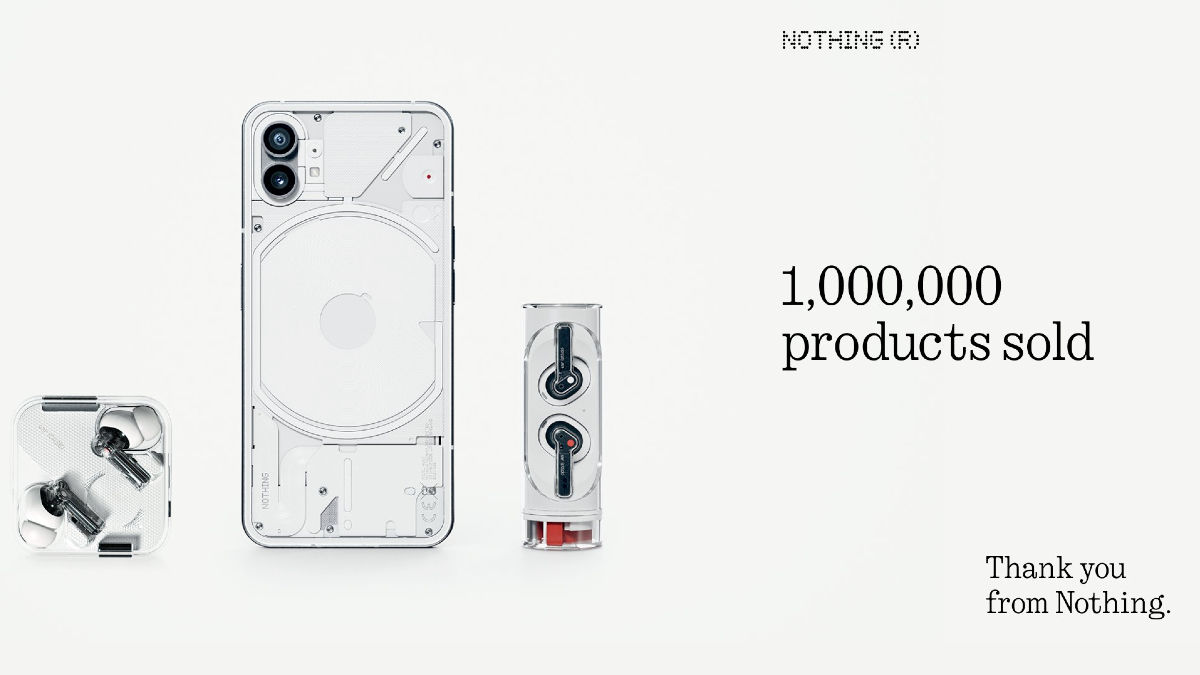 A little over a year after the launch of the first product, Nothing has announced it has sold 1 million products globally, including the Phone (1), Ear (1), and Ear (Stick) TWS earbuds. The brand choose Nothing Ear (1) TWS as its first product and saw success post its launch in mid-2021, thanks to its transparent design and aggressive pricing for what it offered. This was followed by the Nothing Phone (1) in July 2022, which caught everyone’s attention with its unique transparent design and glowing LED lights. Then we had the Ear (Stick), another pair of wireless earbuds, which recently launched in October.

Nothing is the brainchild of Carl Pei, who earlier co-founded OnePlus. The company has investments from top names like iPod inventor Tony Fadell, Reddit CEO Steve Huffman, YouTuber Casey Neistat and others.

Something worth shouting about. 1,000,000 products sold. Thank you for believing in @nothing. pic.twitter.com/H6pGnS4e4f

For a brand that started from scratch with investments from noted names in the tech industry, this is quite a big achievement and something to cheer about. This is a clear indication to suggest the products are well-received among the audience. The marketing strategies that Nothing used for its products resemble those used in the early days of OnePlus.

However, with such incredible success, any brand would want to introduce a successor and cash in on the hype but Nothing says that there won’t be a Nothing Phone (2) anytime soon. The brand is currently focusing on making the Phone (1) as good as it can be. This will include releasing Android 13 stable OS and future updates.

“Phone (2) isn’t launching anytime soon. We’re focused on doing a few things well and won’t churn out dozens of products a year like many others. Phone (1) is our main focus. We’re cooking something really great in terms of software, Android 13 and beyond,” said Carl Pei in a statement.