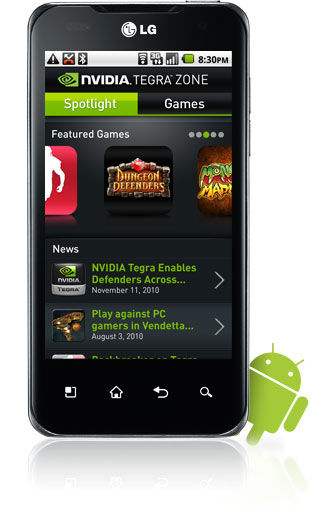 NVidia is weaving itself tightly into the smartphone ecosystem. They have successfully pioneered the dual-core smartphones. NVidia Tegra 2 is the only dual core processor for smartphones out there in the market now. We have seen some dual-core smartphones such as LG Optimus 2X, Motorola Atrix, Motorola Droid Bionic, Motorola Xoom Tablet and NotionInk Adam Tablet. Realizing the need to propel the availability of games that can exploit the power of dual-core smartphones and NVidia chipset, NVidia has announced an android app called “Tegra Zone“. Tegra Zone would showcase the games that are ideally suited for dual-core and advanced smartphones and tablets. This mobile app will allow users to get professional game reviews, high-resolution screen shots, High-definition video trailers, Gameplay videos, Behind-the-scene footages, user ratings on the high-end games enhanced for the use in dual-core smartphones. “The Tegra Zone app allows you to discover the best enhanced games for your mobile device powered by an NVIDIA® Tegra™ mobile processor. Get professional game reviews, high-res screenshots, HD video trailers, gameplay videos, and behind-the-scenes footage. You can also connect Tegra Zone to your social networks, then brag about your high scores and challenge your friends!” 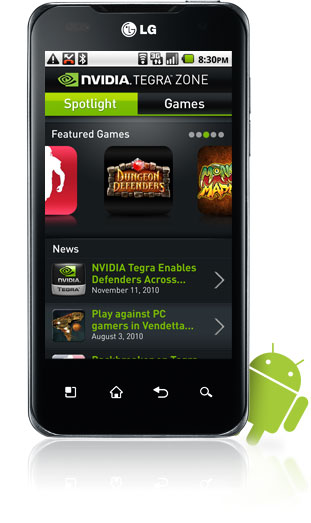 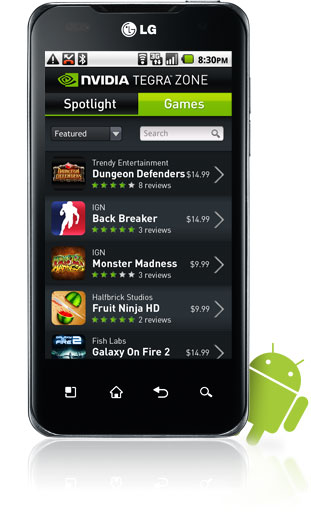 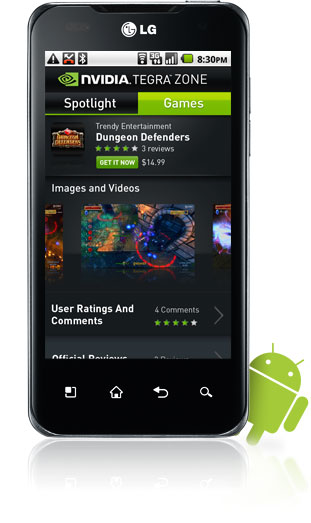 Currently, there’s an imposed limit of 50 MB for games or apps that can be downloaded from Android app market. Tegra Zone would help overcome this limitation as NVidia is committed to provide the infrastructure that can tackle the download of even 10 GB games! “Currently there’s a limit of MB on the Marketplace”, Nvidia’s content director Tony Tomasi said. “So if someone wanted to ship a 10GB game, we would provide the infrastructure… and we’ll provide the data delivery for them on their behalf”. NVidia has showcased 4 high-quality games such as Dungeon Defenders, Fruit Ninja HD, Back Breaker HD and Monster Madness. Via NVidia