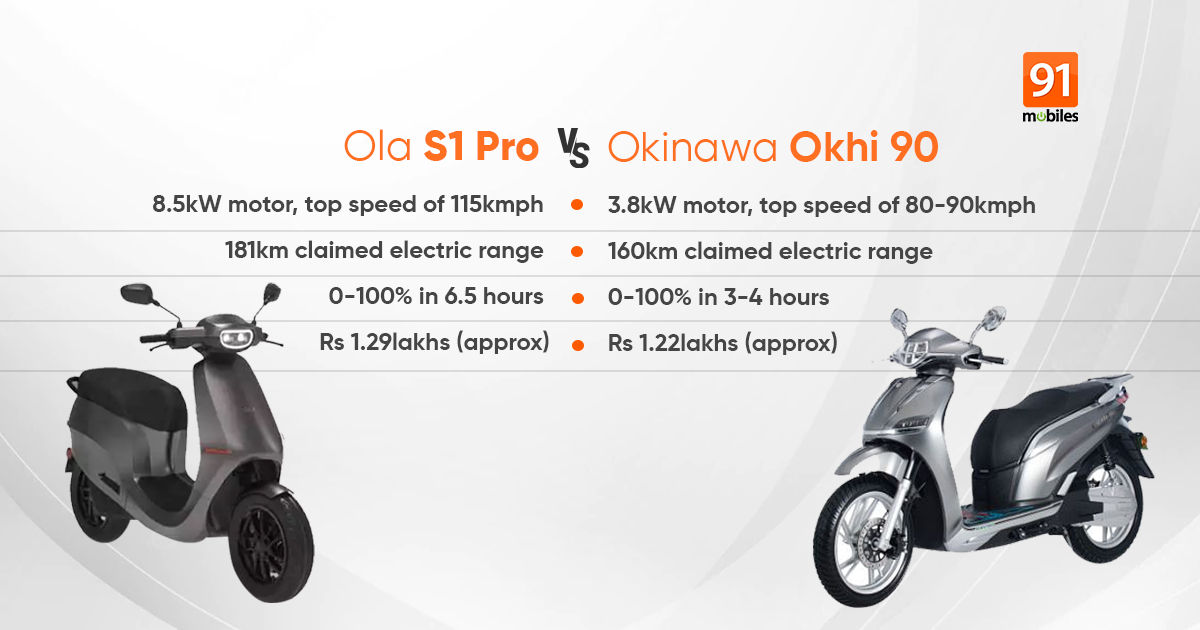 Ola entered the electric vehicle space in August 2021, with its S1 and S1 Pro electric scooters. The company registered record sales figures for the month of March, despite consistent issues in production, delays in delivery,  missing features and even fire and software issues. Meanwhile, Haryana-based Okinawa Autotech launched the Okinawa Okhi 90 in March this year in a market that is getting extremely competitive with new entrants.  We pitch the brand new Okinawa Okhi 90 against the segment precursor, the Ola S1 Pro, to see how they stack up against each other on paper.

Ola Electric is currently selling the Ola S1 Pro as the only variant on offer for the electric scooter and has discontinued the lower-spec vanilla Ola S1. This brought the scooter’s entry price to Rs 1,29,999 (ex-showroom) before subsidies, but this tag is increasing by an expected three to five percent in the next buying window, as announced by the company.

For the price the Ola S1 Pro bundles in a three years/unlimited kilometre on the battery, while the motor carries a three years/40,000 km warranty, whichever comes first. The Okinawa Okhi 90 too features a three-year warranty on both the motor and the battery pack; however, the mileage on both warranties is unspecified.

The Ola S1 Pro and Okinawa differ in their styling by a long shot. The Ola S1 Pro takes a minimalistic approach with flowing body panels and LED illumination. The side stand is integrated into the body and the scooter features a dual Android-like LED headlamp. Ola S1 Pro is offered in 10 shades – Porcelain White, Liquid Silver, Marshmellow, Millenial Pink, Neo Mint, Anthracite Grey, Coral Glam, Midnight Blue, Jet Black, and Matte Black. A limited edition Gerua colour was introduced by Ola Electric during Holi. It has a boot space of 36 litres.

The Okinawa Okhi 90 has a conventional but sporty design, and appears to be a cross between a motorcycle and a scooter. The Okinawa Okhi 90 electric scooter gets 16-inch aluminium alloy wheels which is a segment first. The boot space of the scooter is 40 litres.

The Ola S1 Pro’s performance specifications on paper beat the Okinawa Okhi 90’s claimed capabilities. The Ola S1 Pro brings along an 8.5kW motor with 58Nm of torque that propels the scooter from 0-40kmph in three seconds. The powertrain is capable of pushing the e-scooter to a company claimed top speed of 115kmph and achieves an overall claimed range of 181kms.

On the other hand, the Okinawa Okhi 90 electric scooter uses a 3.8kW motor that can propel the e-scooter to a top speed of 80 to 90kmph. The Okhi 90 is paired to a 72V 50AH Li-ion battery that can deliver a claimed range of 160km. The Okhi 90 goes from standstill to its 90kmph top speed in just 10 seconds.

Both the electric scooters adopt alloy wheels, disc brakes, telescopic suspension and large under-seat storage spaces. The Ola S1 Pro outdoes the Okhi 90 with a fancier single-sided front suspension, a horizontally mounted rear suspension and a single-sided rear swingarm. In terms of modernity, the S1 Pro and Okhi 90 are closely matched with their LED lighting systems and combined braking, as well as Bluetooth connectivity with a companion app on a smartphone. Both the scooters get amenities like – turn-by-turn navigation, over the air (OTA) updates, Geo-fencing, Find My Vehicle, trip history and speeding alerts, among other features.

The Ola S1 Pro comes with a seven-inch touchscreen display, multiple microphones, an octa-core processor paired with 3GB RAM, 4G, WiFi and Bluetooth connectivity. The unit runs on the MoveOS, which is an in-house developed interface by Ola. Some features that have been promised before that are yet to arrive include – cruise control, Hyper mode, hill-hold assist, and navigation. Okhi 90’s top variant has a TFT screen with turn-by-turn navigation and Bluetooth connectivity.

The Ola S1 Pro edges ahead of the Okhi 90 with its claimed 181km of the maximum range as compared to the Okhi 90’s 160km range. While ARAI claimed numbers usually are idealistic, Ola Electric promises a true range of about 135km for the e-scooter. The true range for the Okhi 90 is not specified.

The Okinawa Okhi 90 and Ola S1 Pro can be booked online. In the case of the Okhi 90, the e-scooter can be booked online for Rs 500 and an Okinawa dealer takes on the responsibility of delivery thereon. The booking amount is later deducted from the total on-road price (including insurance, registration and other charges) of the vehicle.

In the case of the S1 Pro, bookings can be made online for a booking amount of Rs 499 post which Ola Electric will deliver the vehicle to the buyer’s doorstep. However, bookings for the S1 Pro can only be made as and when Ola Electric opens up a booking window. Also, a prospective buyer would have to keep in mind the long wait time that the Ola S1 Pro e-scooters are currently carrying.